It was the last day of the holidays and I was feeling quite sorry for myself. My twelve days of freedom, which seemed never-ending at first, had dwindled to nothing. And what did I do? Exactly, nothing! Or not much anyway.

The weather was commiserating with me by cloaking itself in grey and sending some little black rain clouds my way. I had to run an errand in town, hoping against hope that being out and about would cheer me up.

Now, my hometown isn't the least bit exciting. It's the kind of place which is neither a village nor a town. If it was still somewhat rural back in the 1960s and 1970s, it had grown too big for its boots when I returned after 13 years of living in the big city.

Butchers, bakers and grocers have upped and left one by one until only an inadequate handful of essential shops remain in the High Street, the others replaced by the usual chains stores which seem to have colonized all Belgian High Streets. The only plus is that there are now two bookshops where before there were none.

There are a couple of small boutiques as well, and it is to one of them that I seemed to be drawn like a moth to a flame. Looking left and then right to check that I wasn't being followed by the vintage fashion police, I gingerly stepped inside, and promptly fell in love with a skirt! 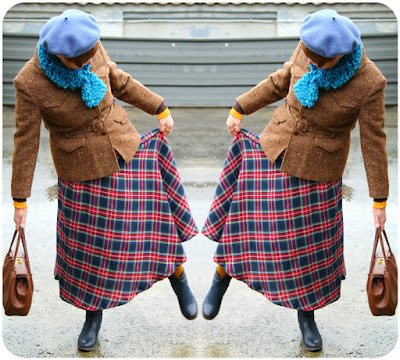 Yes, dear readers, I did succumb to the lure of the sales. But don't tell anyone, please! It's our secret, right?

But look at that plaid pattern, which is such a classic! Surely this calls for a little jig! I love its midi length, which against all rules I do think suits my petite frame. And there's enough fabric for a twirl or two! 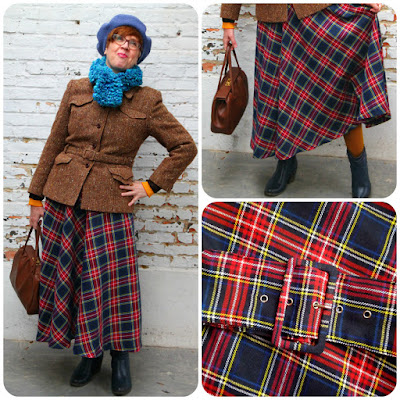 As I wanted to share my naughty buy with you, I waited until the weekend to wear it. I've included a close-up of the fabric, and the wide self belt which came with the skirt. As the belt is a bit floppy and wouldn't stay in place, I opted for a tan leather belt, which you can see below.

First wear this season of my beloved belted tweed jacket, which I accompanied with a blue beret and - again! - my frilly turquoise scarf. It is my current favourite, and perfect for the mild weather we continued to have.

You can catch a glimpse of my curry opaques and the navy booties I'm wearing. 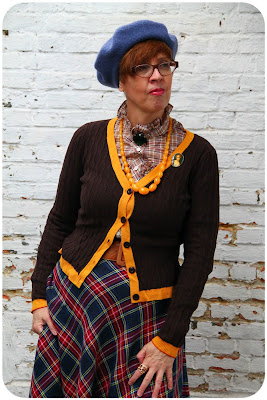 Let me show you what's underneath, which was a chocolate brown cardigan edged in ochre yellow, layered on top of a blouse which I will show and tell you about in a moment. 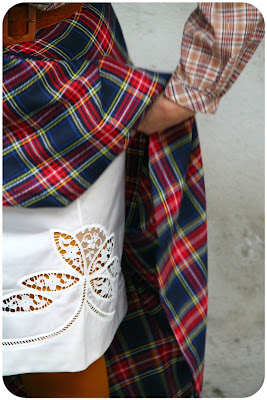 First things first though!  I couldn't resist sneaking in a peek at my vintage slip, one of a couple I charity shopped in the holidays. They both belonged to the same elderly lady who, as testified by the name tags, must have been residing in a nursing home. As they were both crisp and pristine as well as squeaky clean, I didn't mind taking them home, tags and all. 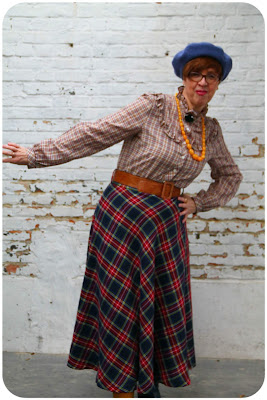 When I returned to work, Think Twice's sales were in full flow and down to € 4. I pounced on this vintage C&A blouse, with its frilly collar and yoke.

In my mind's eye, I could already see it paired with the plaid skirt and, for once, my mind's eye was right. It was a perfect match! 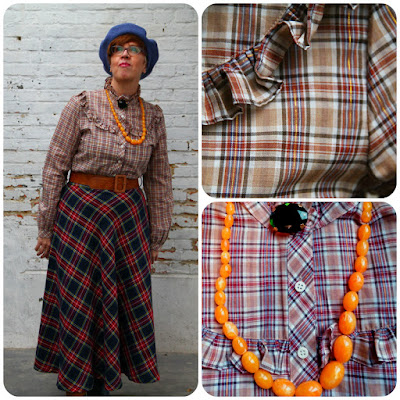 Its high collar called for a brooch, so I added the chunky green glass one I bought in a vintage shop in Middelburg back in November.

In the close-up on the top right, you can see the gold thread which is enhancing the neutral colours of the plaid.

The lovely ochre yellow beaded necklace was part of a late birthday present from my friend Ingrid, which she gave me on New Year's Eve. She'd also crocheted a pair of blue and yellow pot holders to tie in with our kitchen's colour scheme. And then there was a crochet covered clothes hanger which I'll be using to display some of my most precious necklaces. 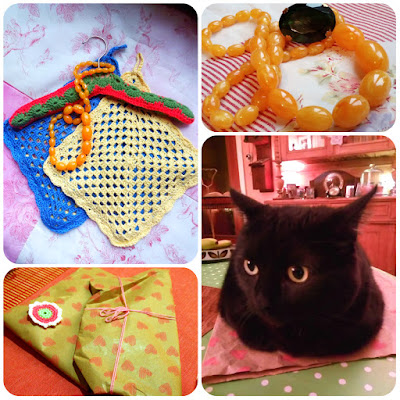 Phoebe immediately claimed the wrapping paper, which we still haven't been able to take away from her. For some strange, unfathomable reason only cats understand, she loves lying on it. 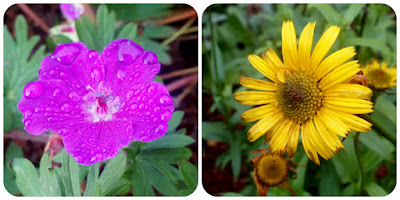 It was still uncharacteristically warm that first weekend of January. And no, I haven't just thrown in some photos of last Summer's flowers to cheer you up on a miserably grey January day. These flowers, and many more, were still rearing their little heads in the vicarage garden earlier this month!

There was no let-up in the rain, so any walking was off the cards. Instead, and for want of a better thing to do, we did some charity shopping. Oh well, needs must! 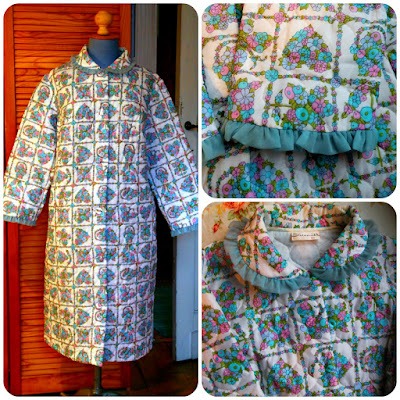 I love browsing the nightwear and lingerie rails and couldn't resist this vintage quilted dressing gown with its pretty design of floral baskets and hearts, and its frilly nylon trim at the collar and cuffs. 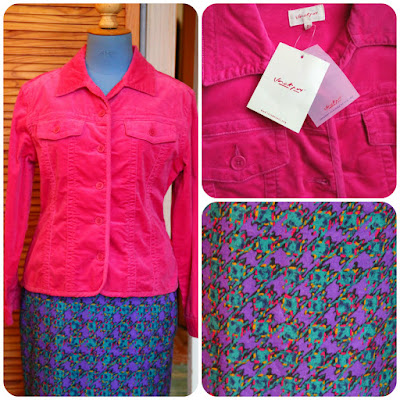 This velvety hot pink (Sheila would say PANK) jacket still had its tags on, showing its original price of € 89,95. It was mine for € 6 and will make a nice change from my regular denim jacket next Summer. Not only was it a perfect fit, I thought it went rather well with this skirt, which was another one of my Think Twice bargains from the week before. 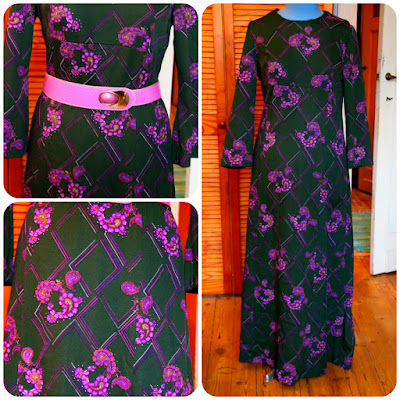 My final Think Twice buy was this forest green maxi dress, with a print of pale green and purple diamonds interspersed with lilac Paisley motifs. I picked up the splashes of lilac by adding my 1980s lilac belt, but I'm not convinced that it works. I will have to style it differently - and wear it myself! - soon. 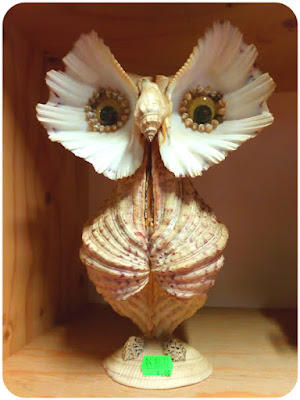 It's been a manic couple of weeks, what with work related issues, and our weekends still partly taken up by clearing and cleaning the parental home ready for sale. Hence, blog posting might be a little erratic, but please bear with me, as I will return to my usual schedule shortly.

I'm leaving you now with what might possibly be the most hilarious piece of shell art work I've ever come across in a charity shop.