As the year was creeping steadily towards its end, we spent our days happily doing nothing much at all.

We slept late, which in our case meant getting up past 8 am, and made plans for the day while enjoying a leisurely breakfast. Then, it was time for me to play with my wardrobe. Oh happy days!

On this day at the tail end of December, I had a craving for pleats! The fit and flare frock, with its pleated skirt, was a Think Twice find back in 2017, which I customized by adding a new set of buttons (see here). I love the sprinkling of pink flowers on a cobalt blue background. 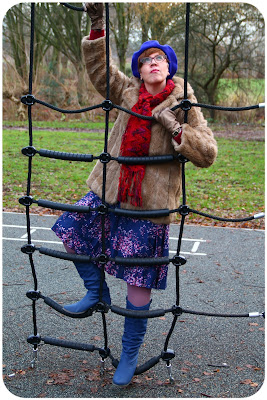 Clouds had gathered, chasing away any lingering sunshine, but as there was no sign of rain just yet, we cleared our fuzzy heads with a walk in the park, halting at the new playground for outfit photos.

Gymnastics, particularly of the climbing variety, have never been my forte, so there was no way I was going to climb this rope ladder, especially as there would be much protesting from my bad knee if I did. 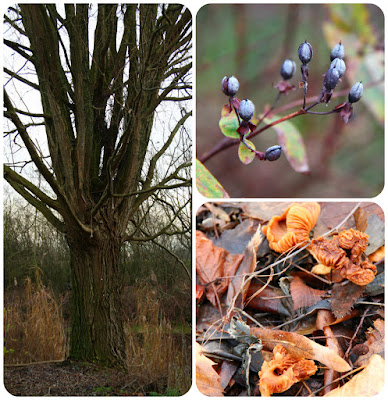 Nature seems to be in a state of confusion. She certainly has her seasons mixed up, thinking it is one long Autumn rather than Winter, displaying a profusion of fungi among the mushy carpet of leaves.

Elsewhere, there were early signs of Spring, as some of the bare pussy willow branches were already sporting the first of their furry catkins. 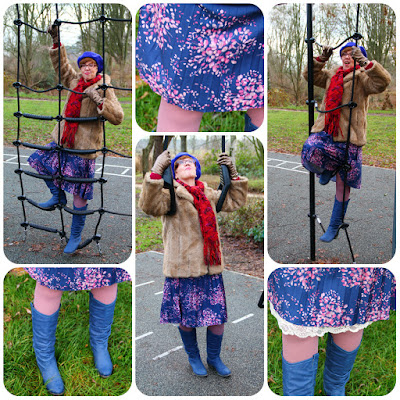 Meanwhile, back at the playground, I was still doing my acrobat impersonation. Rather unsuccessfully, I hasten to add.

But at least it allowed me to show you a close up of my dress's print, my lilac opaques, blue boots and a bit of my vintage slip.

On top, I added my faithful fake fur, a red scarf, a cobalt blue beret and a pair of golden gloves.

Only the gloves and opaques were bought news. They were both bargains picked up at last Winter's sales. 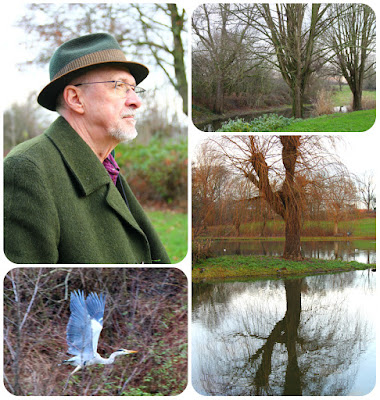 Jos is still happily wearing my Dad's coat, this time accompanied by a new-to-him green hat, a € 5 find at December's flea market.

Winter allows the park's bare bones to shine through, with the skeleton trees in a starring role.

Well away from the beaten path, this heron had found a quiet place for a spot of fishing. But then I came along with my big bad camera. I tried to tiptoe closer but then it took wing. 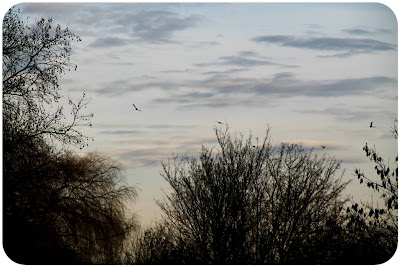 Mid afternoon, and it was already getting dark. This really is the bleak midwinter, even though we were spared the frosty wind, nor was there any sign of snow. 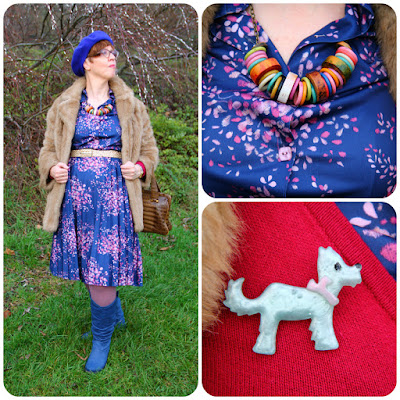 Actually, it was unseasonably warm and mild enough to wear my coat open and show you my dress, with my snakeskin belt at my waist. The wooden disc necklace was bought from Accessorize, who used to have a shop here in Antwerp many years ago, while the vintage brooch pinned to my cardigan, a grey plastic dog wearing a sugar pink collar, was a flea market find. 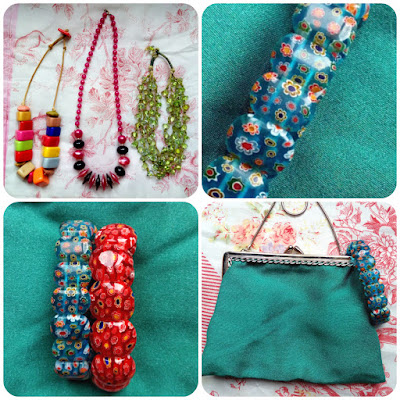 We nipped into the nearby charity shop before returning home. My loot that day were a handful of necklaces, a small green evening bag and a blue glass bracelet.

I immediately recognized it as the little sister of the red one I already had and which I bought brand new at the time. I certainly paid a lot more for it than the € 0,50 I paid for its little sister. Their pretty glass beads remind me of one of those Millefiori paperweights! 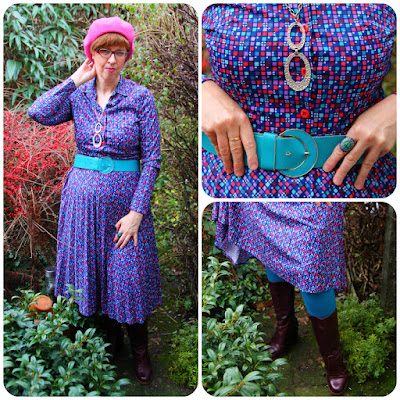 Another day, another pleated dress! I wore this one a couple of days later. It is very similar in style and shape as the one I wore the other day. Its print has lots of tiny squares in blue, pink, red, lilac and turquoise, and its bodice closes with a row of small red buttons. 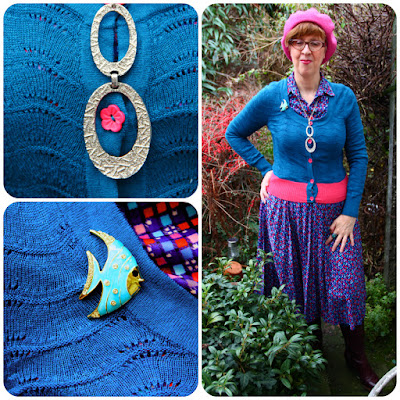 I wore turquoise tights and added a wide turquoise belt and a teal and pink cardigan with the cutest buttons ever, both of which were charity shop finds.

Accessories were a funky white metal necklace, which I've had for such a long time that I can't for the life of me remember where it came from, and a fish brooch bought as a holiday souvenir in Ypres. 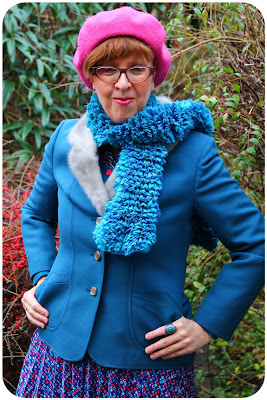 My outerwear consisted of a vintage new wool jacket in a gorgeous shade of teal, with a strokable grey furry collar. I've bought it at Think Twice a while ago, but I seem to have forgotten to mention it on the blog. My fluffy turquoise scarf and raspberry beret completed my outfit, which I wore to run some errands in our village. I really don't need any reason to dress up! 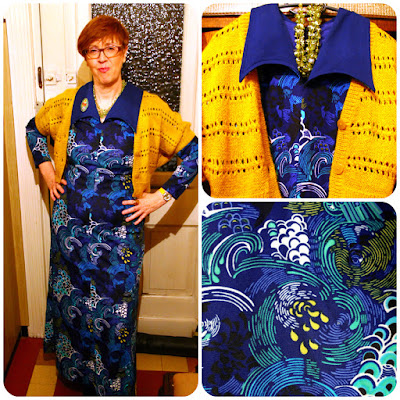 And then it was New Year's Eve, which we hosted this year.

I initially planned to wear something completely different, but when push came to shove I felt more comfortable and confident in this vintage maxi dress.

It was a very impromptu outfit, which came together without any forward planning. I just threw my yellow, cropped, short-sleeved cardigan on top, and added the lime green beaded necklace I'd found at the charity shop earlier that week. I was also wearing these holographic floral velvet booties, but they weren't caught on camera. 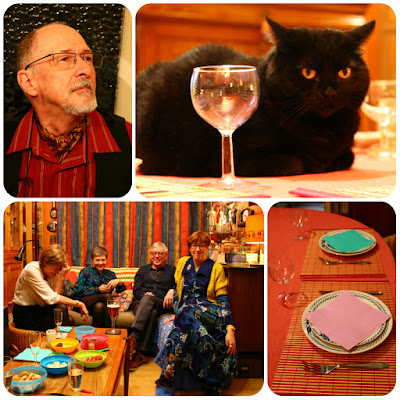 Jos wore jeans and a red striped shirt with a waistcoat on top. The Ascot he is proudly wearing was a gift from Vix and Jon when we met them back in June.

We had our friends Inez, Ingrid and Maurice over. Ingrid provided the appetizers and the starter, a tasty smoked salmon cocktail.

The main course was ours: chicken fillets on bacon, topped with onions, mushrooms and herby butter, baked in foil in the oven, and accompanied by fried potatoes and a salad. But I'd forgotten to take photographs by then, so you'll have to use your imagination! 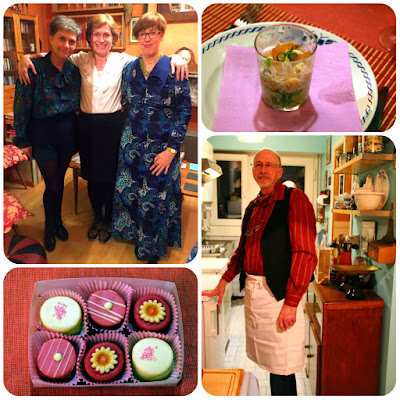 Inez came bearing marzipan petit fours for dessert, while Jos donned his cook's apron and was having a barista moment.

And of course, the girls had to pose for a photograph like we did last year!

Linking to Patti's Visible Monday at Not Dead Yet Style when the link is up!