As much as I enjoyed my days away from the rat race, a small part of me is breathing a sigh of relief that the silly season is over and we can all go back to normal.

January has made the quietest of starts but, as the holidays provided plenty of opportunities for taking outfit and other photos, I'll be blogging about the last week of December for a while yet. 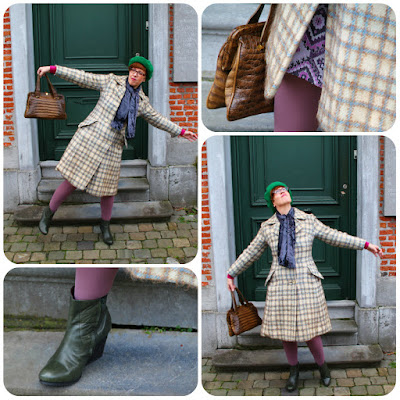 So, let's start with the Saturday before Christmas which was, technically speaking, the first day of my holidays. Twelve days of freedom: sheer bliss!  I'm sure you can see how happy I was!

We didn't go far to take these photos. Walking down our street and passing the late 19th Century house which is home to the local history society, we thought its green front door would make the perfect backdrop, and a change from our garage's peeling white brick wall. 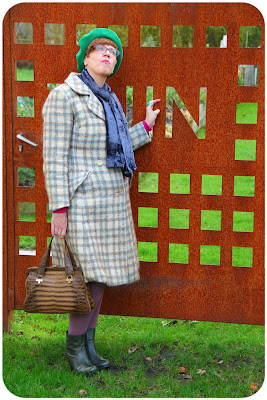 Behind the house is a recently established organic garden, which sadly is only open to the public once a year.

That didn't stop us from making use of its decorative, rusty gate, which complemented my outfit rather nicely. I am partly obscuring the word TUIN, which is Flemish for garden.

The cream, pale blue and brown plaid winter coat, which I charity shopped many years ago, still remains a firm favourite. My other outerwear consisted of a blue crushed velvet scarf and a green beret.

On my feet, my recent, serendipitous charity shop find: a pair of wedge-heeled green booties. Essentials were carried in my good old mock croc bag. 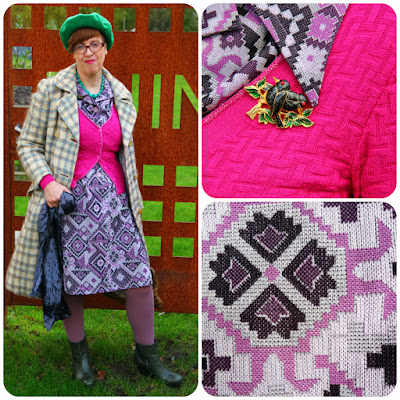 As I was determined to wear some sparkle, I picked this purple and lilac patterned dress, which is shot through with lurex thread. I know it's hardly noticeable in the pictures, so you'll just have to take my word for it. It was a sales bargain from Think Twice back in December 2017, up-cycled by me by changing its buttons. A brooch with a green stone was pinned to its lapel and I chose a green beaded necklace. 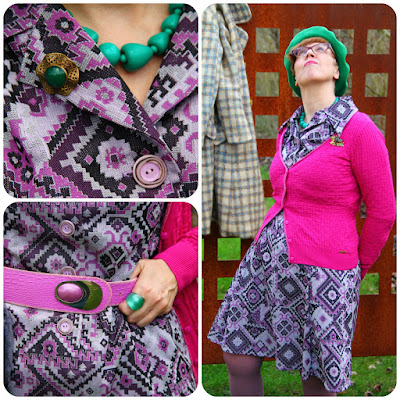 My charity shopped hot pink cardigan is edged in lurex too, and I added a sparkly blackbird brooch for good measure. Lilac tights (the package says Lavender) and one of my favourite belts, a 1980s lilac beauty, completed my outfit. 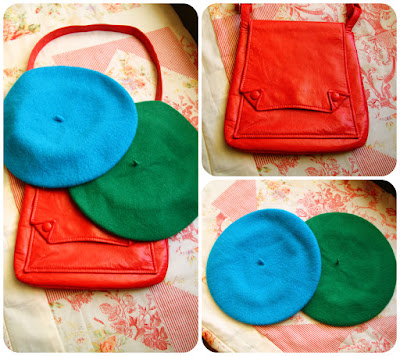 A little word of explanation about the green beret, which I picked up after a visit to my hairdresser the week before the holidays. If you are thinking I already owned a green beret, then you are right, but unfortunately I lost it. I could have hit myself, especially as it took me a while to find this exact shade of green. Needless to say, I was overjoyed to find a new one in a vintage-per-kilo shop near my hairdresser's salon. It's not exactly the same shade, but it will do. The turquoise beret came from the same shop, while the red vinyl handbag came from the Oxfam shop a couple of doors down. 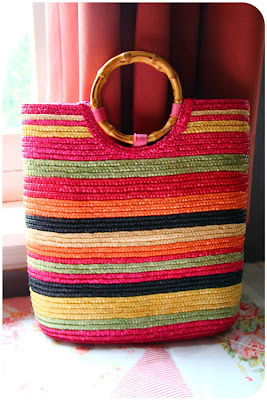 But back to Saturday. Browsing our most local charity shop, I found this striped wicker basket. Even though the round bamboo handles are giving it a certain vintage appeal, it is quite new, as its (hot pink!) lining has a pocket for a phone. It's in perfect condition, and for just € 2, it is now mine.

The clothing rails, which at this particular time of year are full of party frocks and winter woollens, were a disappointment at first, until I happened upon not one but two plaid skirts.

Upon closer inspection, this one, in a black and white plaid and with a single pleat, both at the front and at the back, turned out to be made in England, and I was happy to see the Gor-Ray label. 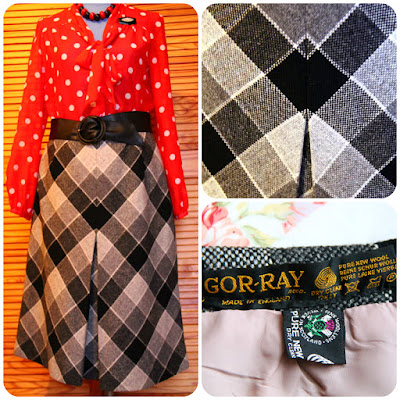 The Gor-Ray company was established in the 1920s as a manufacturer of top-quality skirts and trousers, specializing in pleated, classically tailored skirts. Originally named C. Stillitz & Co., after its founder, its name was changed to Gor-Ray Ltd. in the early 1930s following the success of its leading product, a gored, sun-ray-pleated skirt. 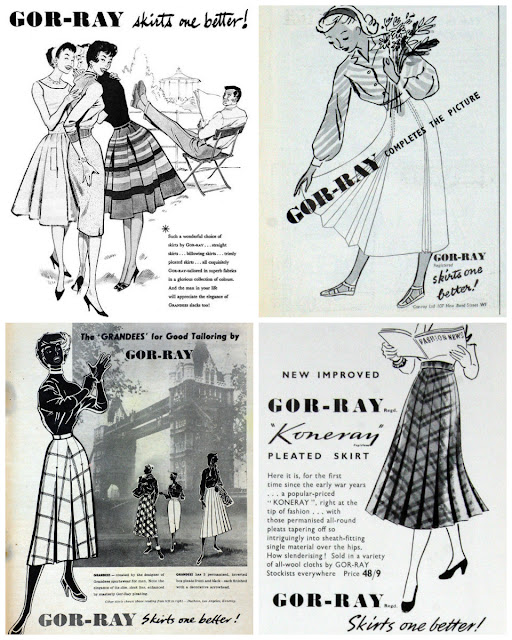 Historically, pleats had been styled by folding and pressing the material, meaning that pleats inevitably lost their form and had to be periodically re-pressed in order to hold their shape.

Gor-Ray introduced new methods of permanently pleating material, whereby pleats would last as long as the garments themselves, technologies which are still relied upon in skirt manufacturing today. 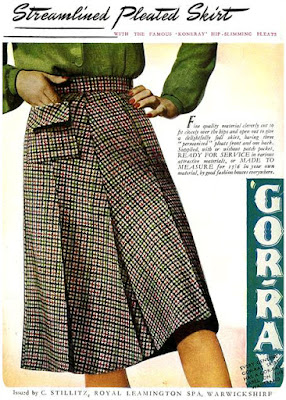 By the time we returned home and had parked our car, we were greeted by a fierce looking sky with a gathering of ominous rain clouds.

They were a prelude to Sunday's miserable weather, which I spent organizing my brooch collection. But I've already told you about this in a previous post. 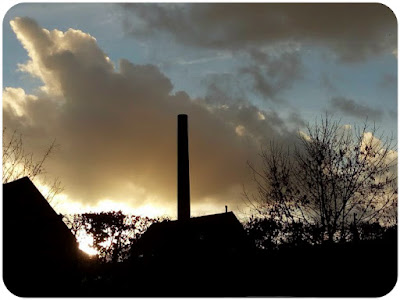 Thankfully, it had stopped raining by Monday. If one looked carefully, there might even have been some patches of blue sky. But as it was Christmas Eve, we wisely avoided the crowds of last-minute shoppers by staying within Dove Cottage's confines and limiting our activities to some lazy pottering and reading. 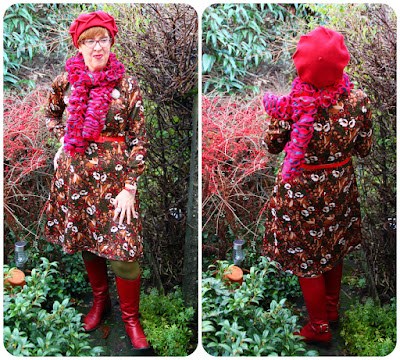 The dress I was wearing has always reminded me of Christmas, with its print of festive greenery and what looks like holly berries. The white flowers could even be Hellebores (Helleborus niger), commonly known as Christmas rose.

I know I should get over these Yuletide connotations and wear it at other times too. 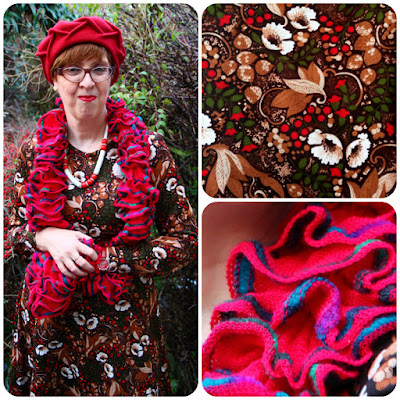 I added moss green tights, a red and white beaded necklace and my red beret, not that it was cold, but simply to hide the fact that my hair needed washing.

Adding to the festive feel, I wore a frilly red knitted scarf, with its pink, green and blue stripes, as a stole. 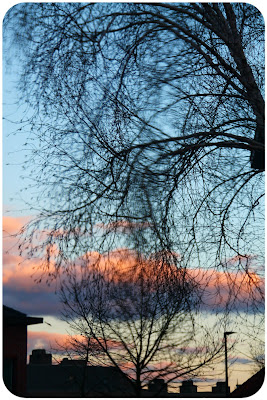 Watching the sun go down from our sitting room's window, I quickly snapped this photo of the bands of pinkish clouds floating through the pale blue winter sky. 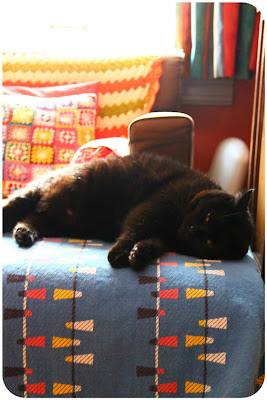 And then Christmas Day arrived and the sun was out in full force.

Aw, look at lazy Phoebe soaking up the sun's rays!  If the fabric covering the footstool looks familiar, it is the 1950s tablecloth I brought home from my parents' house the other day.

Sadly, it turned out to be too narrow for our dining table, so I had the brainwave to use it as a plaid. 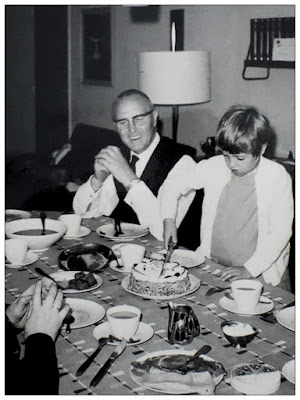 When I was looking through an album of old photographs a couple of days later, I came across this one with the tablecloth in a starring role. The birthday girl cutting the cake is me, aged 5. Next to me is my paternal grandfather, who was also my godfather.

But I'm digressing! Although we usually lounge around in our pyjamas all day on Christmas Day, the sun streaming in through our windows made us reconsider, so that after lunch we got dressed and went for a walk.

Dressed in a sparkly shift dress, with a crazy yellow, orange and acid green print on sky blue, I must have made quite a contrast to the other, fleece clad, dull-coloured walkers.

The only concession I'd made to this walking lark was a pair of worn-down old boots. 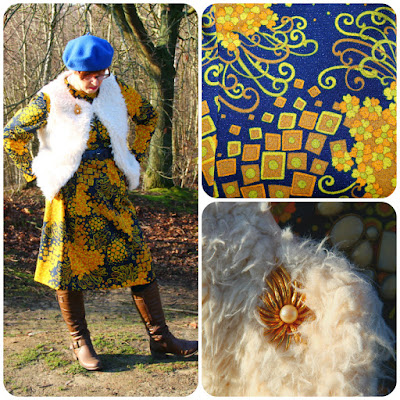 You've already seen the photos of our walk, but I wanted to take you through what I was wearing.

The dress was a lucky find in a vintage-per-kilo shop in Antwerp, its pristine label confirming that it must have been deadstock. It's from the Swedish Aspens brand, and the fabric contents shown as Asplene, which I presume is a relative of Crimplene, and Sildorex, its name suggesting that it might be responsible for the gold specks in the material.

Although it is ever so slightly too big, there was no way I was going to leave so much fabulousness behind. Accessorized with a stretchy blue belt, a fluffy fake fur vest with a starburst brooch pinned to it and a statement necklace found at a flea market, I felt on top of the world that day.

I will be back with more holiday outfits in my next post.