I'm the first to admit that November in Zeeland doesn't have quite the same ring to it as April in Paris, but believe me, the weather was balmy enough to rival, and indeed surpass, any April day's.

Here I am, still in my vintage St. Michaels dressing gown and pink slippers at 8.52 am (quite a luxury for me on a Thursday morning), having a wake-me-up cup of coffee, with the sun streaming in through the windows. 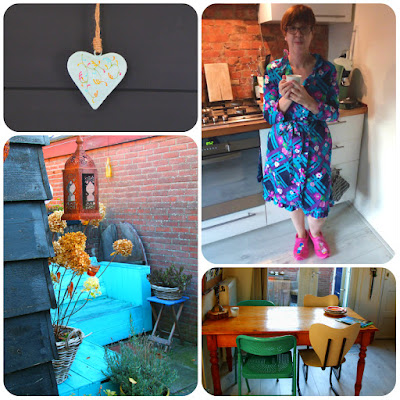 Our itinerary of the day was to drive down to the North Sea resorts on the northwest coast of the Walcheren peninsula. A scenic drive along quiet, tree-lined country roads, with fields as far as the eye can see stretching away on either side, the flat landscape dotted with grazing cows, neat little houses and picture postcard perfect windmills.

But then the omnipresent roadworks and confusing diversions put a spanner or two in the works! 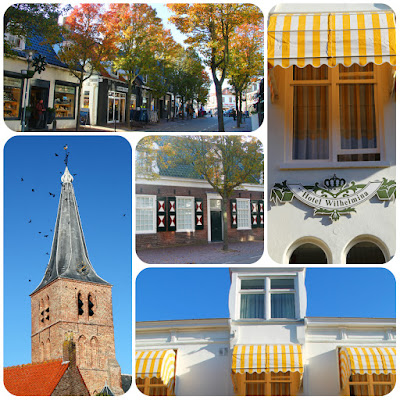 Finally, we reached our first destination, Domburg, the oldest coastal town in Zeeland, where parking is plentiful and free out of season. I'm sure it would have been quite a different story in the Summer months!

Domburg has a long history as a beach resort as well as an artists’ colony.  Its healthy air and the luminosity of its skies have been drawing people here for many a year. 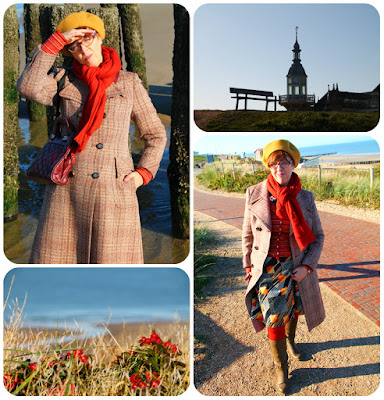 It was the Dutch physician and - rather confusingly - inventor of Swedish Massage, Dr. Johan Mezger (1838-1909), who first coined in on the town's  potential as a health spa.

Originally from Amsterdam, Dr. Mezger had a wide circle of rich and famous patients, who followed him to Domburg when he set up shop there. 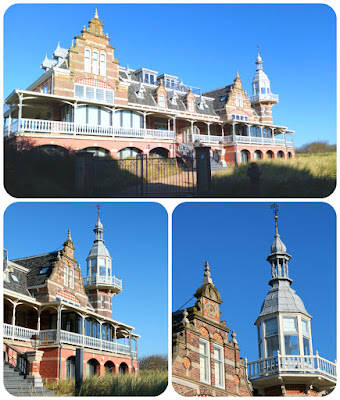 In 1888, a small pavillion which had been built on top of the dunes was replaced by the extraordinary Badpaviljoen (Bath Pavillion), built in lavish neo-renaissance style. It has been a listed building since 1983, and now houses a restaurant as well as several exclusive private apartments. 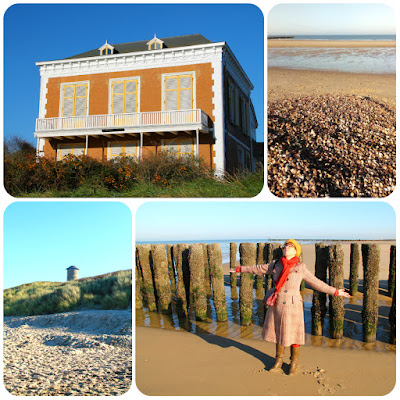 Behind the sand dunes, there's a wide sandy beach which  extends all the way to the next coastal town, Westkapelle.


Around the turn of the century, artists started arriving in Domburg, drawn by its mythical light. Many spent their Summers in the town, producing paintings depicting Domburg and its surroundings, with a favourite subject being the beach with its long lines of wooden poles, acting as wave breakers, jutting into the sea. 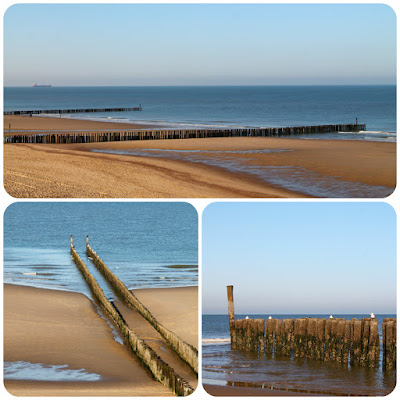 One of the members of the artists' colony was Piet Mondriaan, who spent several Summers (and some Winters) in Domburg between 1908 and 1916.

His seascape, Beach with five piers at Domburg, dates from 1909, and is a view which is still recognizable today. 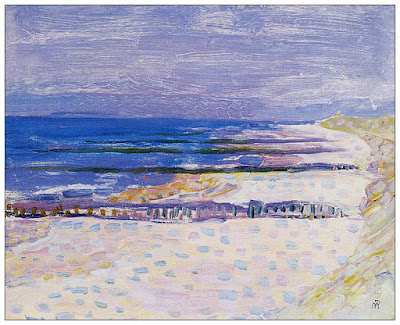 It was heaven strolling on the beach beneath the deep blue of the sky, breathing in the salty sea air.

That day, I accessorized my checked Winter coat with a mustard beret to contrast with the sky, as well as a burnt orange scarf, which looks almost red in the brilliant sunlight.

I'd swapped my ankle boots for long, comfortable, low heeled boots which made trudging through the sand a doddle.

Underneath my coat, a long-sleeved frock, in black with a crazy white, yellow, orange and red print (see here for a closer look), topped by a striped cardigan in the same colours. 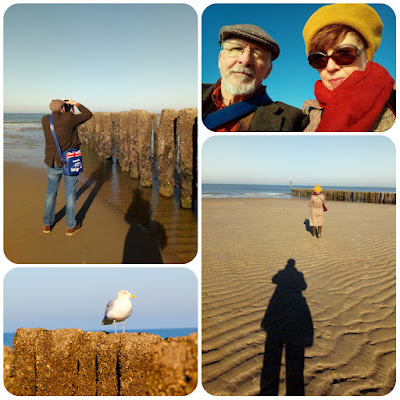 It was well past midday by now, so we returned to the town's main street for lunch, which we had at By Juuls, a restaurant recommended by Jos's son. 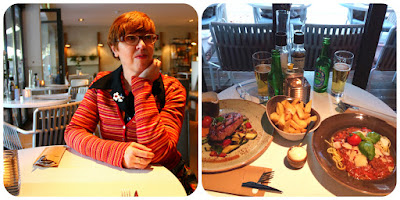 After lunch, our plan was to take the coastal road out of Domburg towards Westkapelle, which would take us over a massive, 5 kilometres long seawall, where the Walcheren peninsula juts into the – sometimes – wild and windy North Sea.

Again, roadworks did their best to thwart our plan and when our satnav noticed that we didn't take the left turning she (yes, she's a she, called Marie Jeanne) intended us to take, she proposed an alternative route which would first lead us inland, and then back to the coast. 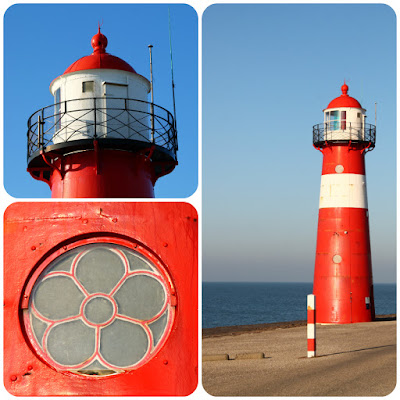 If we'd followed her instructions, we would have missed this picturesque lighthouse, which is why we wanted to take the coastal road in the first place, so we were very naughty and ignored her! 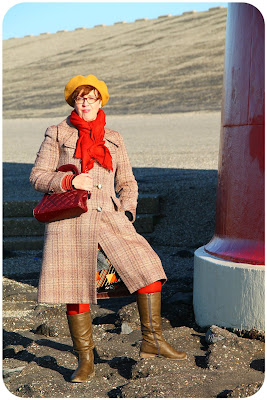 I've always loved lighthouses, especially those of the typical red and white striped variety, and ever since I saw Tina's post back in October, where she posed next to this one on the road to Westkapelle, I knew I wanted to do the same!


There are two lighthouses at Westkapelle, and this is the so-called Low Lighthouse (Noorderhoofd or 't Lage Licht), the smaller of the two, an iron, 16 meter high structure built in 1874, which sits along the sea dike to the north of the town. 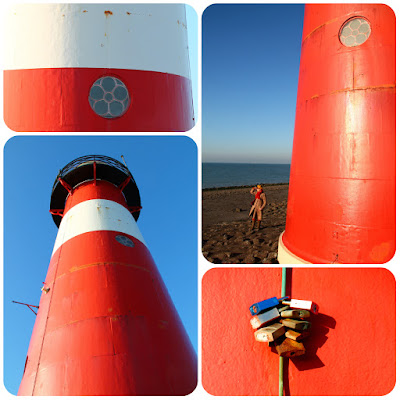 If this is the Low Lighthouse, there must be a High Lighthouse as well, right?

This one, a prominent landmark visible from far and wide, is further along in the village itself, and consists of a red structure dating from 1817 and placed upon a 50 meter high brick tower constructed in 1470 as a church tower.

We didn't stop to take its photograph, but if you're intrigued, you can have a look here. 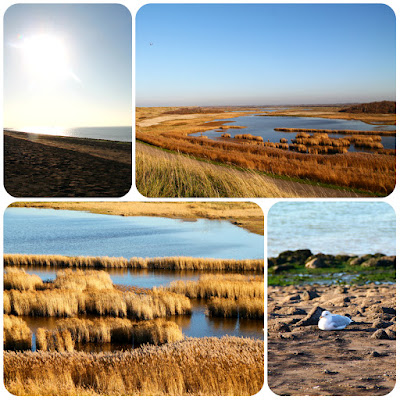 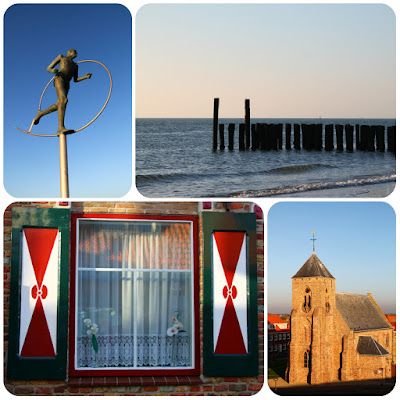 Our final stop of the day was the popular seaside resort of Zoutelande, which is called the Riviera of Zeeland and was rated the best resort of the Netherlands in 2013. 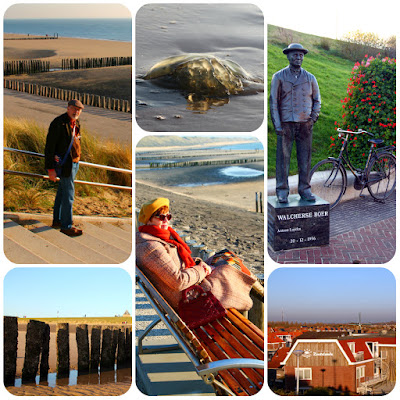 Lovely though it is, wild horses couldn't drag us here in High Season, but on this glorious November day, we enjoyed the view of the virtually empty beach from a bench on the promenade. 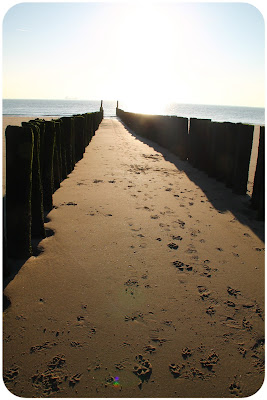 Linking to Patti's Visible Monday at Not Dead Yet Style as usual.