All along the water tower

It's November but apart from one or two miserably grey and wet Autumn days, we keep being blessed with unseasonably warm weather.

My transitional wardrobe has really come into its own these days, as I've even been wearing those dresses which usually fall by the wayside for it being either too warm or too cold. 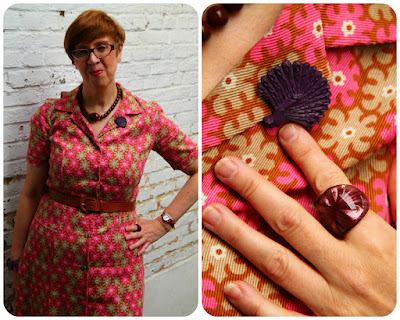 This pink, tan and taupe short-sleeved dress is made from a lightweight corduroy, its fabric too thick to be counted as a Summer dress, while its short sleeves prevent it from being an Autumn staple.

It's been in my wardrobe for well over a year - my blog tells me I bought it in April 2017 - picked up at a consignment store we sometimes visit as a convenient stop-over between charity shops.

Their stock mainly consists of furniture of all shapes, sizes and eras, with the odd smaller, usually quite overpriced object thrown in. We treat it more like a curiosity shop, gawping at some of the gorgeous things well beyond our budget and space limitations, while having a good laugh at some of the "what were they thinking of" stuff. 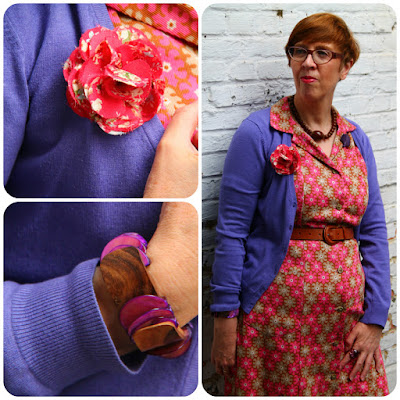 At one point, a couple of clothes rails had appeared out of nowhere and, making a beeline for them, I was happy to see they contained lots of vintage. On closer inspection, it dawned on me that I'd seen some of those clothes before, in a vintage shop in Antwerp which sadly stopped trading. It just couldn't be a coincidence, so I'm quite sure that's where they originated from.

Over the months, I bought some of the dresses and this was one of them. 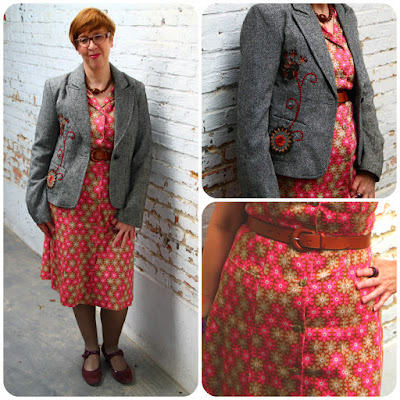 I wore it for a get together with friends on a Sunday afternoon a couple of weeks ago. Although it had a self fabric tie belt, I thought it looked better with this tan leather belt.

I used lilac and purple as accent colours for my plastic peacock brooch, ring, bracelet and cardigan. The plum coloured shoes are by Hotter and were a € 2 flea market find back in May.

The grey tweed jacket, with elaborate embroidery on its right side, was charity shopped last month, but never shown on the blog. 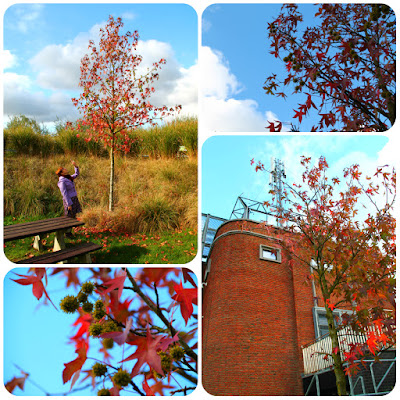 Fast forward to the next week, when on Saturday there was a definite nip in the air, the bright blue sky belying the fact that a cold northeastern wind was blowing, making me regret the wearing of my thin lilac jacket and the omittance of a pair of gloves. 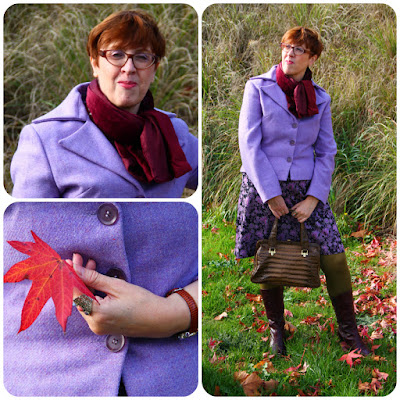 With a flea market planned on Sunday, we wanted to take it easy on Saturday, but decided on a short outing to blow away the week's cobwebs. And to show you what I was wearing, of course! 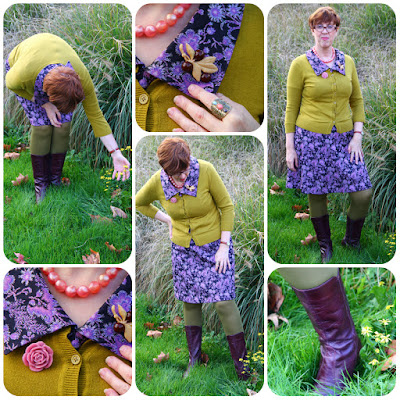 Purple, lilac and mustard with a bit of old rose thrown in!

The purple and lilac dress I was wearing, with its dropped collar and three self buttons down the front (purely for decoration, mind you, it closes with a zip at the back) was one of my first ever vintage purchases.

I added a mustard cardie and opaques in a similar colour. The first opaques of the season! 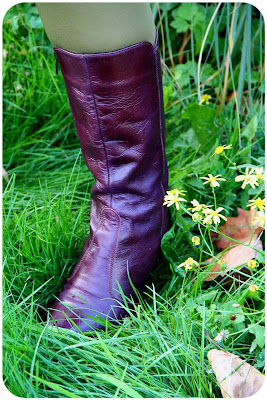 My burgundy new-to-me boots were a recent find from Think Twice. This really is a case of serendipity as I wasn't even looking. In fact, I'd given up looking altogether for a suitable pair by then.

After desperately seeking a fitting pair (and you can take this quite literally!), I was happy to stumble upon these pull-on ones back in November 2016. However, they weren't easy to pull on. Or off for that matter. Soon, the pulling on had created a bulge on the inner heel, making them quite uncomfortable to walk in.

Needless to say that I squeed when I spotted this pair, which not only are a perfect fit, but have a zipper too! 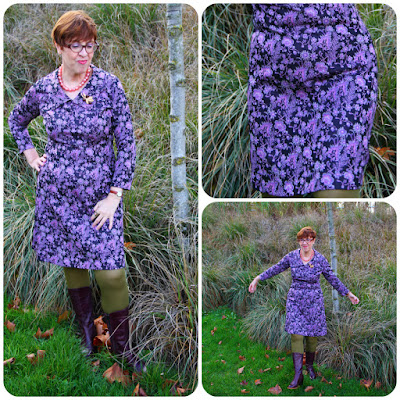 We stopped for outfit photos in the little garden behind the old water tower in the neighbouring village of Reet. 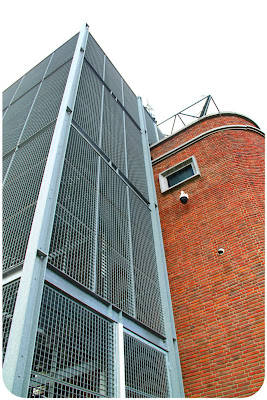 At first sight, you'd be forgiven in thinking that the low, squat building, merely ten meters in height, is remarkably low for a water tower. However, as it was built on the highest point of the area's clay formation, forty meters above sea level, this allowed it to fully function as a water tower.

The metal cage attached to the tower contains a set of steps leading up to the viewing platform.

We'd been up there once before but after the viewing platform was vandalized in September last year, it had been temporarily closed off. 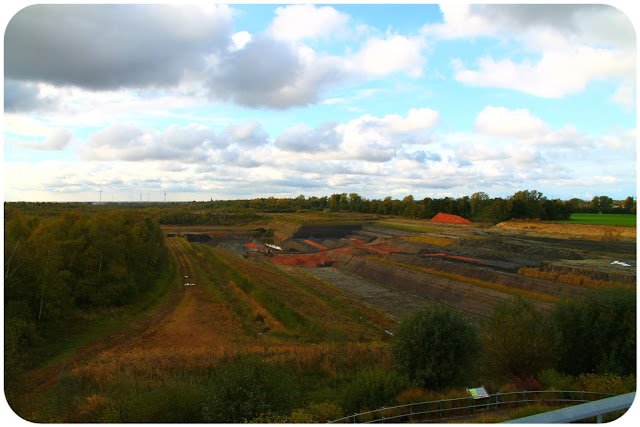 Climbing up to the platform we were rewarded with a panorama of the surrounding landscape, with a working clay pit belonging to the last of the brick making factories in the foreground.

They are the lone survivors of the once mighty brick making industry which used to reign the area. 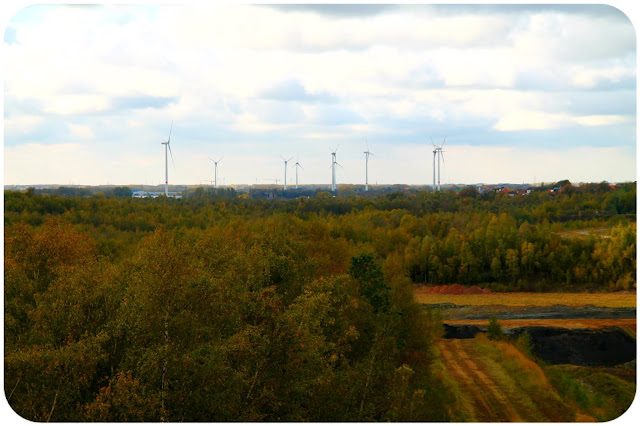 All around, as far as the eye can see, nature has reclaimed the heavily scarred landscape and some of its abandoned clay pits have been turned into precious nature reserves. 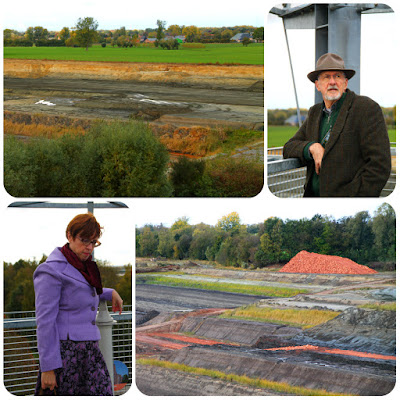 From up here, several local landmarks can be made out, and on a clear day part of the Atomium in Brussels, some 30 kilometers away, can be spotted on the horizon.  That day, it was firmly hiding behind some overgrown bushes, so we'll have to return after they have shed their leaves.

The sun dived behind an advancing army of dark, menacing clouds, taking away its warmth and leaving the biting wind to chill us to the bone. 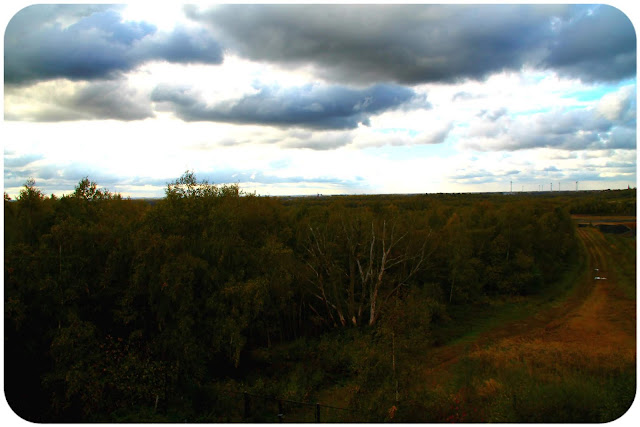 With a final glance at the bleak landscape suddenly plunged into an eerie semi darkness, we descended the caged stairway back to ground level.

I can tell you that, suffering from vertigo, going down those see-through steps was infinitely more scary than going up! 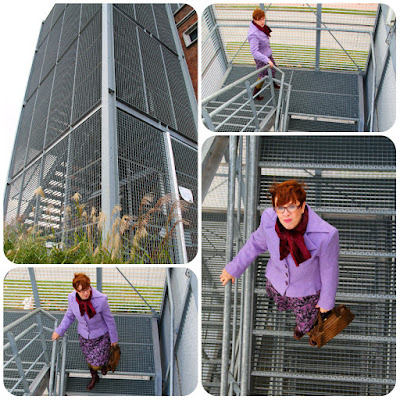 Before returning home we stopped at a local charity shop where pickings were slim but I still managed to find a corduroy blazer in a delicious berry colour and an orange leather belt ... 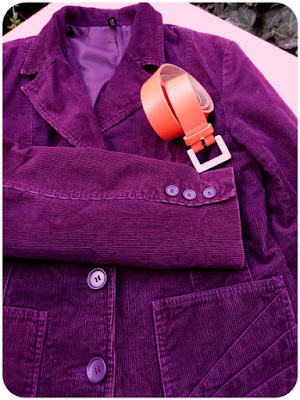 ... both of which I would be wearing to the flea market the next day.

Meanwhile, I am once again joining the visible ladies at Patti's Visible Monday at Not Dead Yet Style.