Looking at my diary for March, I almost did a double take when I saw that two of my favourite events had been chalked in for the same weekend!

So, we'd hardly recovered from the Retro Day of Saturday before last, when there was our favourite flea market to go to on Sunday.

We were still having a temporary respite from the cold, so I decided to wear Saturday's swing coat again, accessorizing it with blue instead of red for a change, with a sky blue lightweight wool scarf and a beret in electric blue. 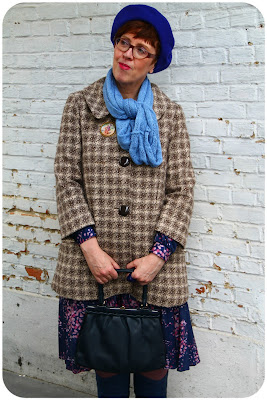 I was originally wearing a pink cardie underneath, but that was discarded only minutes after entering the flea market venue.

My blue frock was sprinkled with bursts of pink flowers, and in spite of initial misgivings (I thought it would be too frumpy), I felt absolutely fantastic wearing it.

This was of course greatly helped by the fabulous belt, which I found lurking in one of my belt boxes, giving the dress an edgy 1980s look. I never thought I would say that about anything 1980s but the further we're getting from that decade, the more I'm appreciating the merits of its iconic looks.

Not the ginormous shoulder pads, obviously! Nor would I want to go back there, especially not to the old house, which sometimes still haunts me in my dreams. 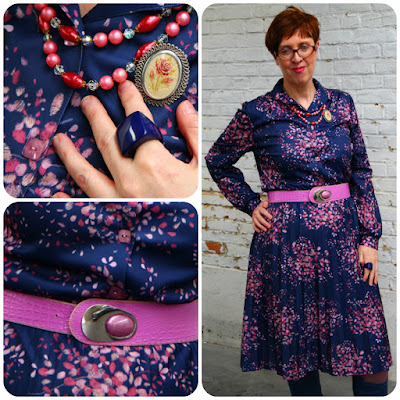 I added my great aunt Josephine's pink pearls, which puts the outfit back several decades, as does the oval rose brooch. The ring I'm wearing is one of my collection of plastic rings (hello, 1960s!) which I'm picking up whenever I can find them. Sadly, they seem currently to have vanished from the high street. Fashion is so fickle! 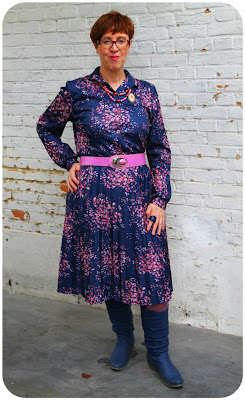 A pair of pink-ish tights (they're Falke, and the colour's called Valerian) and my blue, flat heeled boots, and I'm ready for the hunt. 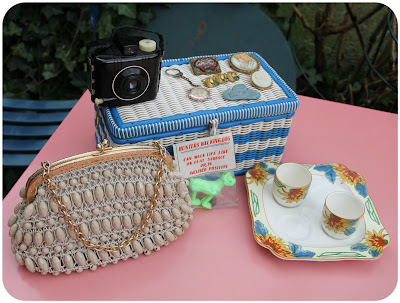 Fast forward several hours and we're back at home with our treasures. Ominous rain clouds were gathering, so I quickly made a tableau on our garden table, where there's the best light for photographs this time of year. 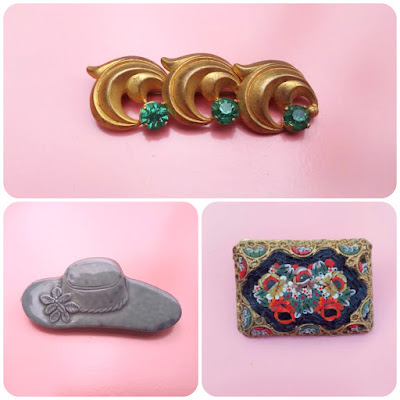 Now, let's look at it all in more detail.

It wouldn't be a successful flea market if there weren't any brooches. The top three ones are from the same stall, which has an alluring jumble of costume jewellery. Sadly for me, an English lady, who visited the flea market on Saturday, beat me to it, and got away with the best stuff.

The fabulous rectangular micromosaic brooch came cheaply as it had been repaired with a replacement clasp, but luckily I'm not a purist, especially if the price is right. Nobody sees the back when you're wearing it anyway. 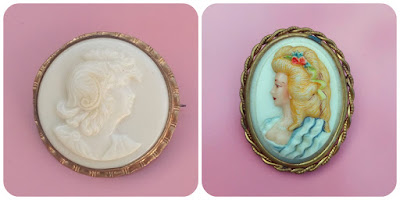 These two unusual cameo brooches came from different stalls. They are both celluloid and I'm especially enamoured by the slightly faded lady sporting a Pompadour hairdo on the right. 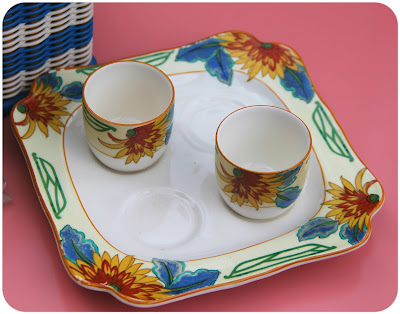 This Art Deco egg cup and serving platter set by Crown Ducal Ware is missing two of its egg cups, but at € 3 it would have been silly not to take them home. 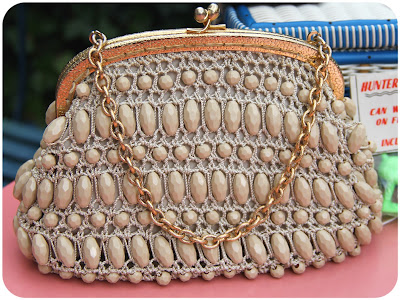 In spite of my self-imposed handbag ban, Jos persuaded me to buy this beaded evening bag. Oh, go on then! 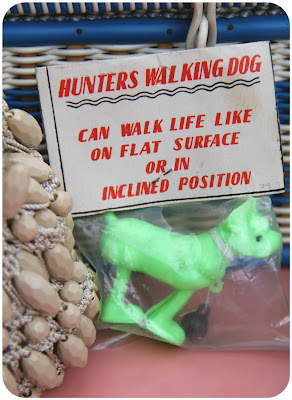 Having had a similar toy as a young boy, Jos had a bout of nostalgia when he laid eyes on this small plastic dog. Apparently, it can walk, but although it's very tempting to try it out, he's to remain in his packing.

Poor little mite! As if it isn't bad enough that he's green ... 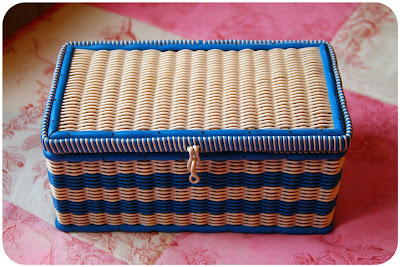 I wasn't in need of another sewing box, but I loved this small blue and white plastic woven basket, for which I will no doubt find another use.

In case you are wondering about this post's title: this Kodak Baby Brownie camera was actually one of our first buys. 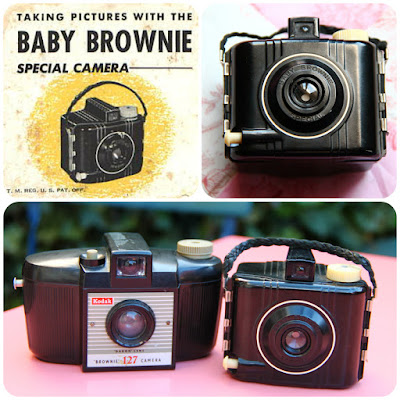 This small, basic Art Deco style camera was originally introduced in 1934. Made of Bakelite, it had a flip frame viewfinder, as you can see in the ad below. Apparently, the company was still called Eastman back then! 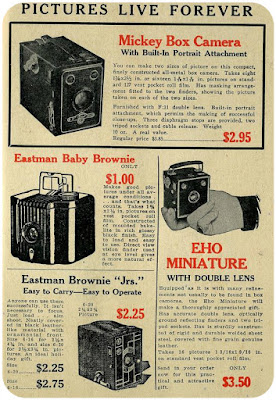 Ours, called the Baby Brownie Special, was its replacement, adding an built-in optical view finder, produced by Eastman Kodak Company from 1938 to 1954.

In the above collage, you can see it next to one of the other Brownie cameras we have in our modest collection, for size comparison.

One of the stars of our collection is a boxed Brownie Starlet camera, complete with flash unit and flashbulbs, dating from the late 1950s. 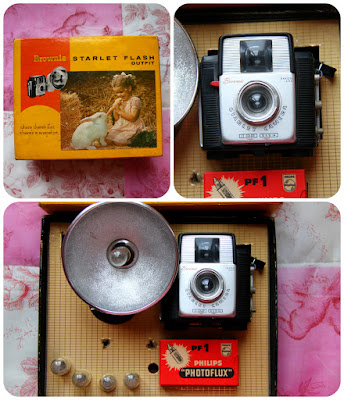 Jos found this in the waste disposal area in the communal basement of the block of flats we used to live in before we moved to Dove Cottage. As photography has always been one of his interests, he didn't hesitate to give it a home.

In order to recover from this mad weekend, I managed to take Monday off.

Around noon, our doorbell rang and it was the postman carrying a mysterious parcel.

In it were two gorgeous dresses, complete with their original belts. One even had a matching jacket!
They were a gift from the lovely Gisela at Miss Magpie's Musings! Wasn't it sweet of her to think of me? 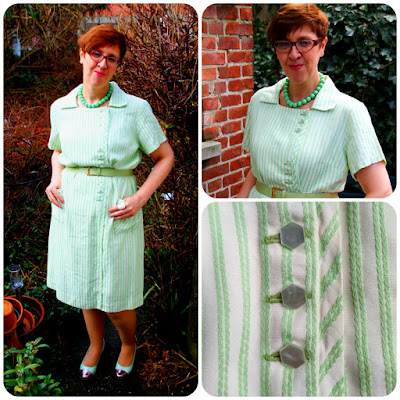 They obviously had to be tried on immediately and, as the weather was still mild, it was possible to take outfit photos in the garden without freezing to death.

First up is this candy striped green and cream frock, closed asymmetrically with a row of the most unusual hexagonal mother of pearl buttons.

The self-fabric belt is slightly too long for me, but I replaced it with a plain green one, and added a green necklace and green slingback shoes with coppery toes. I drew the line at going barelegged so I am wearing nude tights here. 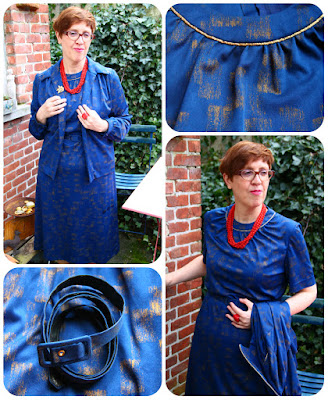 The second dress is the one with the matching jacket. It's a gorgeous royal blue colour with a subtle gold print and gold piping at the neckline.

I spent the rest of the day making space for my new acquisitions by filling a couple of bags for charity.

Now don't tell me I haven't been a good girl!