Wouldn't it be wonderful to be able to travel back in time inside your own life, or even beyond that, into your parents' and grandparents' lives, even if just for the briefest of moments?

Of course, unlike the protagonist of Audrey Niffenegger's The Time Traveller's Wife, who was afflicted with a so-called time-travelling gene, you'd like to have a say in the when and where, and arrive at your destination fully clothed. Preferably in the appropriate gear in order not to stand out too much.

Until such a thing is possible, I have to content myself with looking at old photographs and trying to recapture the moment caught on paper.

Being the unofficial keeper of the family's photographic heritage, I've had my fair share of this lately, and I must admit that it is not something I'll ever get bored with.

Due to circumstances, there are several periods in my life which go largely undocumented, as little or no photographs were taken, which I will regret forever.

Here, I have to make do with what my memory (always fraud with subjectivity) comes up with. For some of these memories, rose tinted glasses are firmly planted upon my nose, while others seem to be framed in mournful black.

Photographs, especially if not put into albums or at least some kind of order, have a tendency to be forgotten and neglected.

The majority of the ones I inherited, quite a mind boggling amount of them, are not labelled in any way. There's the odd one with a date and - if one's really lucky! - a place or a name pencilled on the back, but the rest are blanks in both senses of the word.

There's the old red family photo album which started with me as a baby and ran until the early 1970s, just after my sister was born, and which used to be a lovingly maintained album full of chronologically ordered square black and whites.

Then my dad bought a super 8 camera and, while it was exciting to see moving images of oneself, the novelty soon wore off.


Besides, these could only be enjoyed by putting up screen and projector which had to be hauled from their hiding place in an upstairs room, as well as darkening the room by closing curtains and blinds, preferably with the whole family present and sitting on the edge of their seats as if in anticipation of the main feature in the cinema.

The same with slides, which my dad later resorted to. I have never quite understood their appeal, preferring an album, or at least a boxful of photographs, to be taken out and looked whenever the mood takes you. 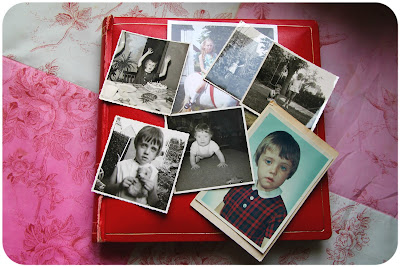 The red album still exists today, but it is in complete disarray: photos have been taken out and added willy-nilly. There's no system, no timeline, just a jumble or unrelated black and whites with the odd faded colour photograph thrown in, skipping from one era to another and back again. I have no idea what happened there ... 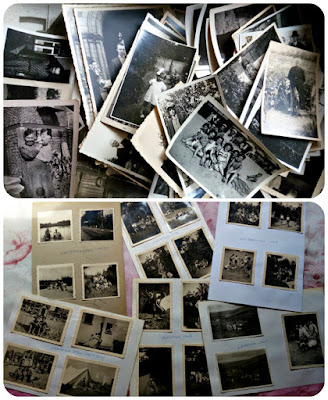 Several years ago, my dad gave me some boxes of photographs and documents belonging to my mum's side of the family.

I remember these, as they used to live in a chest of drawers in my maternal grandparents' attic room. 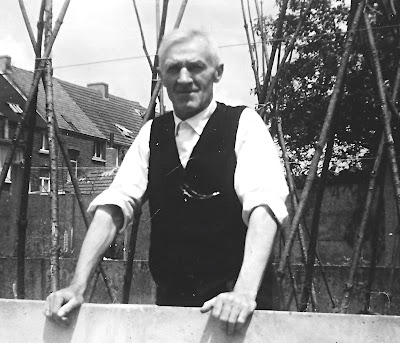 My granddad, a gentle white-haired man, who always wore a waistcoat with a pocket watch, sometimes took me up to the attic to look at the photographs of his and my grandmother's younger selves. 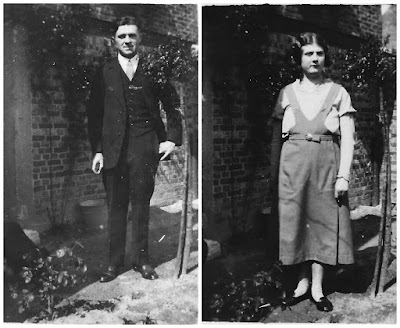 There were quite a few pictures too of my mum as a little girl in the 1930s, always with a huge bow in her hair, which must have been quite the fashion for girls at the time!

As a child, it was quite ungraspable that these were the same people that I knew as my parents and grandparents. 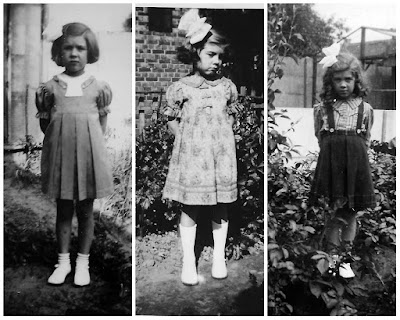 Then there were photographs of people I'd never known, but who are part of the fabric of my past nonetheless. 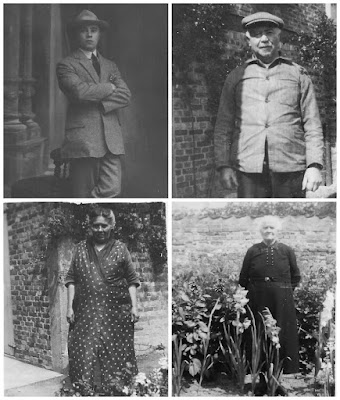 Just looking at these photos takes me back to that attic room with its faded flowery wallpaper, well-worn linoleum and dark wooden chest of drawers, the sunlight slanting through the small dormer window, on what must have been a 1960s Wednesday afternoon.

Later, when my dad turned 80, he gave me the photographs belonging to his side of the family as well, as I was making a digital photo album telling the story of his life. 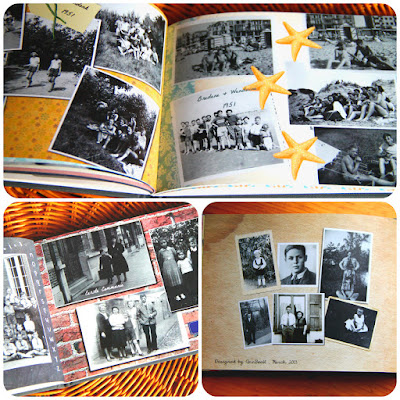 There weren't quite so many - I suppose my paternal grandparents didn't own a camera when my dad was growing up -  but as luck would have it, there were some with helpful captions mentioning a date and place.
I especially love the photographs recording the carefree years between the end of the war and the start of my parents' married life, when a whole group of youths, including both my parents, went on day trips by bike, or camping by the seaside. I have included these extensively in my dad's digital album (above). 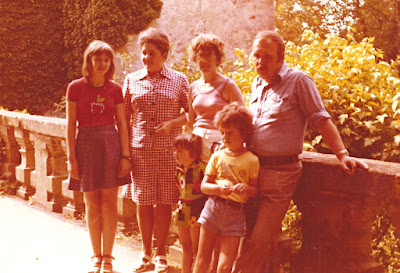 I am taking tentative steps out of my time machine now.

Here, I am back in July 1975. I would be 14 in September.
The colours have faded - a typical phenomenon with photographs of the era - which adds to the nostalgia factor.
We were on holiday in Germany and this is a rare photograph of all five of us together.
The lady standing between my mum and me was staying at the same guesthouse with her husband, who took the photograph.
My parents kept into contact with the couple, who lived near Frankfurt, for years. 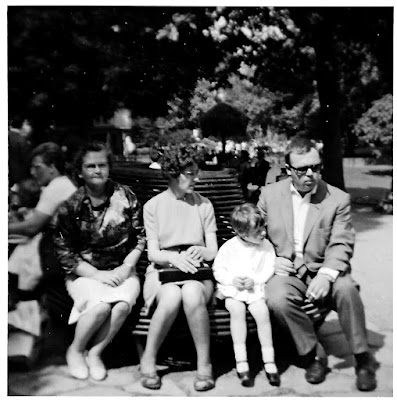 Next stop is ten years further along the line. It's 1965 and we're at the zoo in Antwerp with my paternal grandparents. I'm between my parents - I was still an only child back then - and my grandmother is on the left.

I love this photograph, as it captures the moment as it was. I don't think anybody except my grandmother knew it was being taken, so we're just being and not posing.

I have this photo framed and I often catch myself looking at it and wondering what it was I was looking at, and what was going on in my parents' minds that day, as they both seem to be lost in thought. 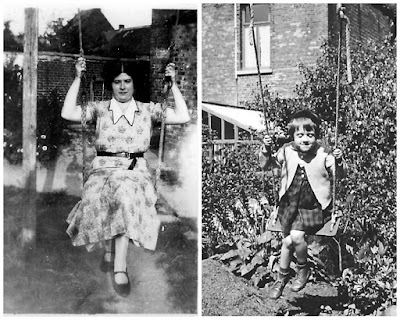 Oh, and before I return to the here and now, I would like to share these "swinging" pictures, more than thirty years between them, of my maternal grandmother (taken in the early 1930s, I guess) and me (1965).

Some things really are timeless!
Posted by Polyester Princess at 19:23