It's April in my heart again

How fickle April is!
One day she decides to behave as she, the first full month of Spring, is supposed to. Then, at a moment's notice, temperatures drop considerably and it's like another season altogether. 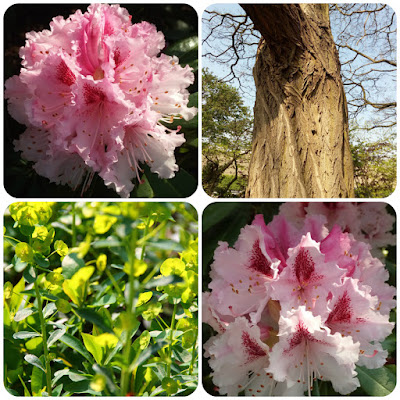 The sun was warm but the wind was chill.
You know how it is with an April day
When the sun is out and the wind is still,
You're one month on in the middle of May.
But if you so much as dare to speak,
A cloud comes over the sunlit arch,
A wind comes off a frozen peak,
And you're two months back in the middle of March.
~Robert Frost, Two Tramps in Mud Time

How right Mr. Frost was!

I was wearing a light jacket on Saturday, which I could easily have done without, and Sunday was even better, but by Monday I was back in my winter coat. 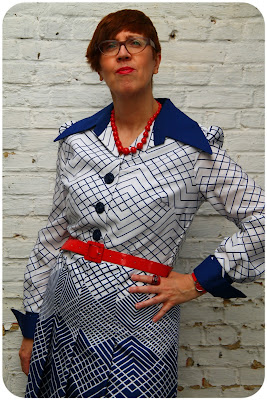 Saturday's outfit consisted of several pieces which have been in my wardrobe for a quite a while, but which only now got their first outing.


The dress, in a lightweight and lined Trevira fabric, has an eye-catching geometric pattern in blue and white, with elaborate turn-back cuffs, a massive and dangerously pointy collar and large blue flower moulded buttons. 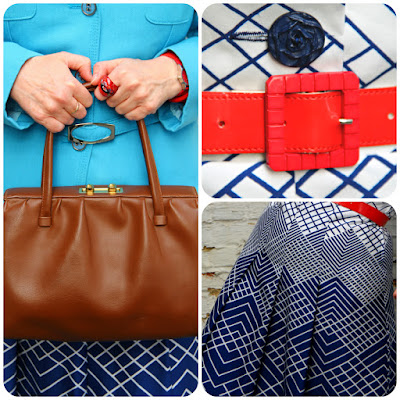 I used red as an accent colour by adding a red vinyl belt with a square plastic buckle, in keeping with the dress's geometric pattern, a string of red plastic beads and a flower embellished red plastic ring.

Blue,white and red is a classic combination, and always a winner, but I decided to add a lighter blue as well, by choosing this belted jacket. 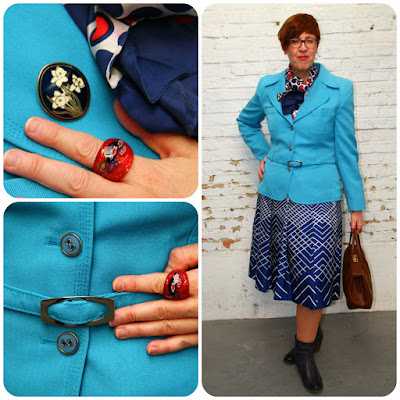 The final touches were a daffodil brooch, a blue, white and red spotty scarf and a roomy tan handbag,

Where we we going, all dressed up like that? Not that I'm not always dressed up, mind you ...

In spite of the sunny weather, we went to an indoor flea market, which is taking place on a monthly basis from October to April, in Antwerp. We'd missed the March edition, and as this was the last one of the season, we simply had to go.

As usual at this time of year, however, and especially on a fine Spring day like this, there were quite a few gaps between the different stalls, and the quality of the remaining ones was generally rather poor.

There were quite a few good jewellery stalls, though, and it didn't take long for me to find the brooch on the left, which is ticking more than one box, as it's a Lourdes souvenir too! 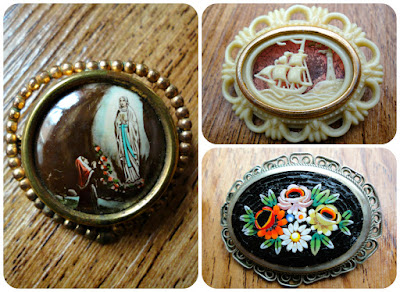 Then there was the Brooch Lady, who usually has a stall on this market. We'd only seen her a week ago, but she'd brought different folders of brooches, and as we probably won't see her again until October, I splurged out on two little works of art: a Celluloid brooch featuring a carved out ship and lighthouse, and a Micromosaic brooch featuring flowers on a black background. 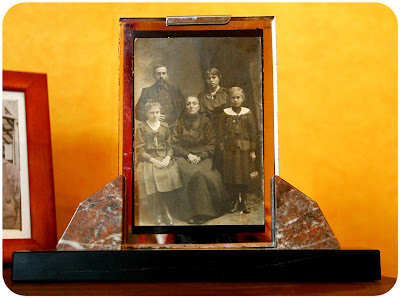 Meanwhile, Jos found this Art Deco marble photo frame for only € 4. It is now holding a photograph of Jos's Mum (the girl on the right) and her family, dating from shortly before the First World War.

After we'd eaten our packed lunch and had a much needed cup of coffee, we browsed the rest of the stalls. 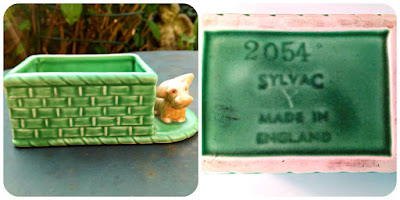 I spotted this Sylvac ornament at a stall selling pretty little things for next to nothing.
I was attracted to it because of its colour as well as the little dog, but hadn't cottoned on that it was Sylvac until I turned it around. In the meantime, I've seen them on the Internet selling for much more than what we paid. Which is a good thing, as sadly it didn't make it home in one piece. Somebody whose name I won't mention wasn't too careful ... and had his job cut out gluing it back together. 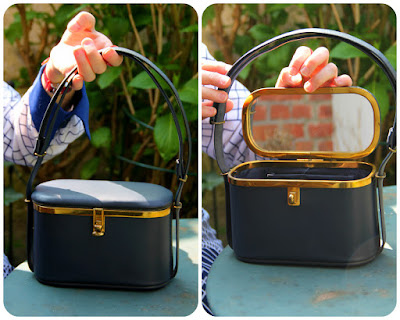 From the same stall came this cute boxy 1960s handbag, which has a large mirror in its lid.

On our way home, we passed one of Antwerp's most picturesque parks, Den Brandt, which we last visited back in January when it was a veritable winter wonderland.

In spite of it being such a gorgeous day, there weren't too many people around, although quite a few joggers crossed our path. We, however, strolled at a very leisurely pace. 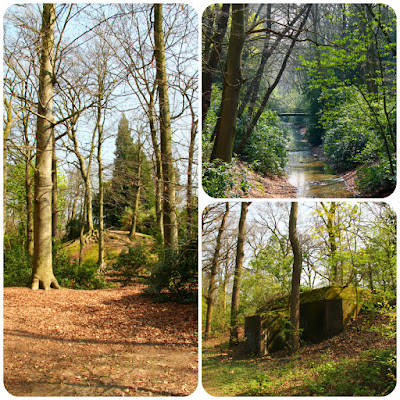 Hidden at the edge of the park is a so-called bunker village, built by the Germans in 1943 as headquarters for the Atlantikwall in Belgium. 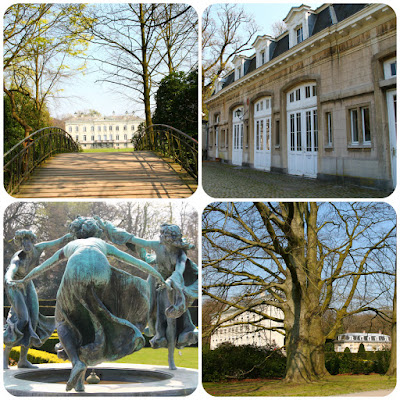 The part of the park behind the romantic castle,which was built in the late classical style, is laid out as an English landscape garden, interlaced with invitingly winding paths. 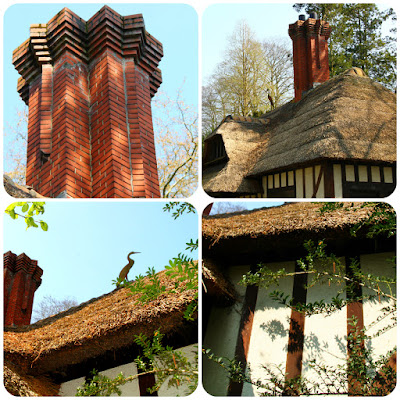 There's also a folly in the form of a fairy tale, English style cottage. 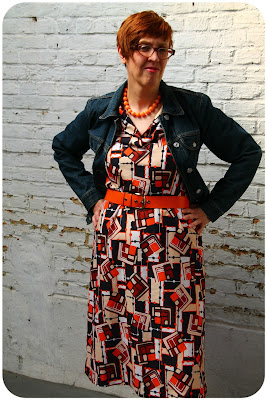 Sunday had an almost summery feel to it, and would have been ideal for a longer walk, but unfortunately we'd agreed weeks ago with my brother and sister to meet at my dad's house.

No reason not to dress up, though, even if just a little bit!


We weren't exactly in the mood to do much clearing, especially as we've come to a stage where the only stuff left are things nobody really wants or knows what to do with, and which is mainly stored in the dusty, stifling attic. 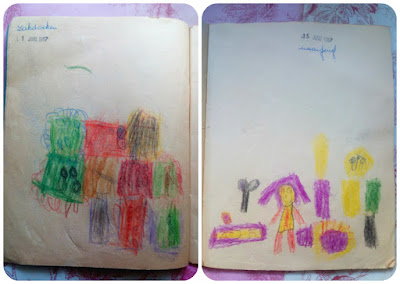 I looked through boxes of old school stuff and kept a selection of my earliest exercise books, including one full of drawings I made in nursery school. I never had any talent in that direction, so I'm glad some of them had helpful titles added by the teacher, together with a date stamp. 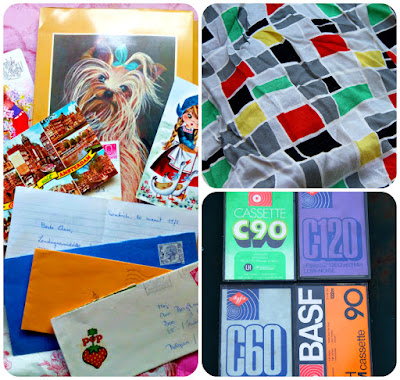 I was thrilled to find this folder (left) containing postcards and letters dating from the 1970s, as well as my old cassettes dating from the same period, but I was getting odd looks when I insisted on taking home a piece of crumpled and torn 1960s fabric, which used to be our bathroom curtains. 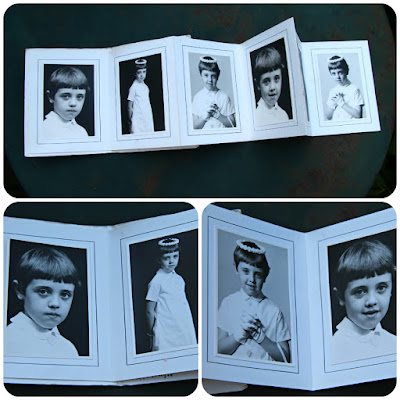 Oh, and there was this series of professionally taken photographs done for my First Communion, in May 1968.

Don't I look like a little Princess, with my little crown of fabric flowers?


Posted by Polyester Princess at 19:42