We'll collect the moments one by one

We're more than a month into Spring now, and the season is still dragging its heels. Admittedly, it wasn't all bad. We've certainly had the odd fine day, when all was right with the world, but these were few and far between and never lasted long.

Lately, we've been plunged back into late winter, with temperatures darting around the zero degree mark at night and not climbing out of single figures during the day. 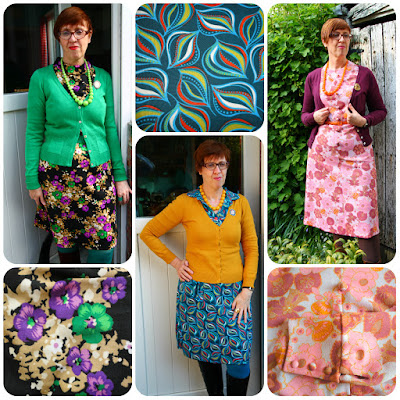 It's a good thing I didn't put away all my winter stuff just yet, but having only a small selection of long sleeved dresses to choose from almost feels like having a capsule wardrobe, which makes me feel quite panicky at times. There are advantages as well, as I kept out a couple of dresses which had been patiently awaiting their turn, and which I've now finally got around to wearing.

So, here's a a little peek at some of the things I've been wearing for work in the last two weeks or so.

Last weekend started early, on Friday afternoon. I met my friend Inez for a coffee (or two) and we chattered away until it was time to hit the shops. 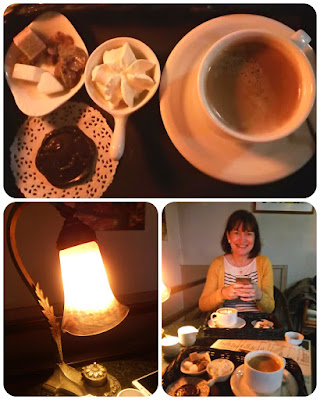 It was the start of yet another of Think Twice's sales and, although I left the first shop empty handed, I struck gold at the second, where I found a green printed dress and a fabulous orange leather jacket. Yes, you've read that right: orange! 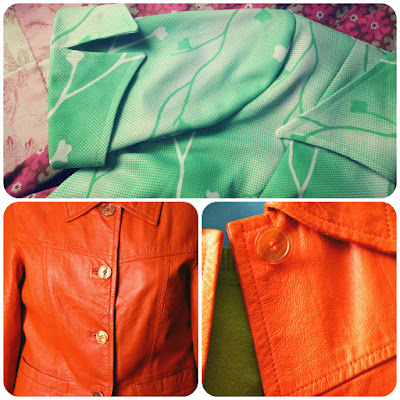 You'll see me wearing both the dress and the jacket soon. If the weather improves, that is ...

On Saturday, we did our usual round of the charity shops. As the concept of charity shopping is quite different in Belgium (apart from the odd shop like Oxfam, the charity shops are not on the high street, but rather outside town centres), we visit the area's shops on a rota, choosing two or three which aren't too far from each other. 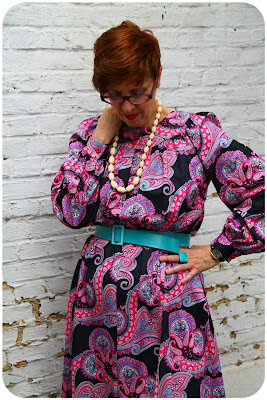 Let's have a look at what I was wearing.

This black dress, with a Paisley print in pink, white, lilac and turquoise, is one of the "unworn" ones still waiting to be bagged up for summer.

It's got two bright pink, purely decorative buttons at the neckline, which are repeated at the cuffs.

I was looking for a pink belt but to my amazement I found that I didn't have one! 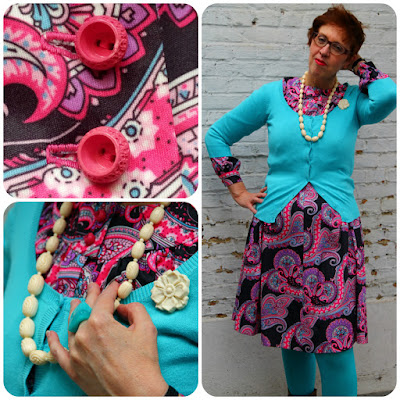 So, I took my lead from the turquoise in the dress to accessorize it with a turquoise belt, tights and cardigan and added a string of carved, ivory coloured beads and an ivory coloured flower brooch. 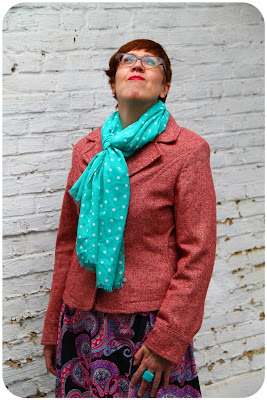 I wore my pinkish red tweed jacket (last seen here), but it was actually too chilly for it, and the lightweight spotty scarf didn't help to keep out the cold either.

Again, we didn't find anything in the first shop. On our way to the second shop on our list, we passed our favourite branch of Troc, part of a chain of consignment shops. Although their prices can be exorbitant, and we mostly window shop there, treasures can still be found now and again. 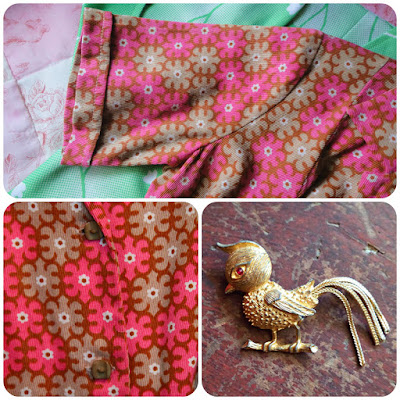 I couldn't resist a short sleeved pink flowered dress, in a lightweight cord fabric, and I took pity on this vintage bird brooch, which was hidden among some glittery modern ones.

Our final shop was a small one in a neighbouring village. In spite of its size, there's usually a thing of two which catches our eye, and prices are more than reasonable. 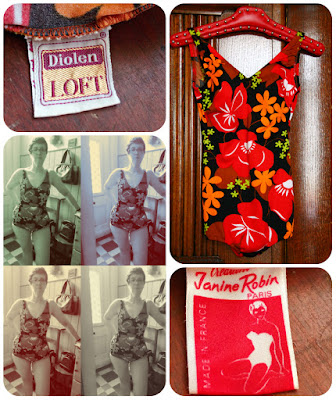 While Jos was browsing the records, I browsed the rails of uninspiring clothes but then found this gem peeping out from a box of odds and ends. It's Diolen, and look at that fab Paris label. And it fits me too! Can you imagine me lying on a beach in Wales wearing it? No? Well, neither can I! I'll be glad not having to wear a (rain) coat! 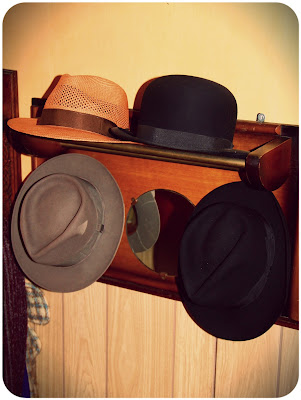 Our final purchase in this shop was a hat rack.
Now that Jos is a wearer of hats, he needed somewhere to put them, so we were looking for a small rack which would fit in the only remaining wall space in our entrance hall.
I spotted it the minute I walked in, but typically I forgot to bring my tape measure. Luckily, there were some convenient, unopened rolls of wallpaper nearby ... Also typically, the rack wasn't priced, but the shop attendant asked would € 3,50 be alright? Yes, it would!

Saturday night saw us going out for dinner with a group of friends, in commemoration of a friend who passed away in February. 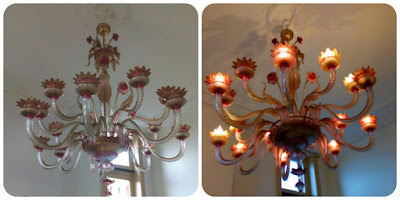 I'm not in the habit of taking photographs on such occasions, but I did snap the fabulous chandelier which was hanging above the dining table. 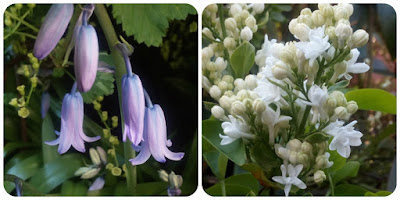 In spite of the inclement weather, nature seems to be thriving. The first of the bluebells are putting in an appearance, and even our lilac is already in bloom.

I can't believe how advanced our white current bush is, its inconspicuous yellow-green flowers having turned into clusters of tiny green berries almost overnight. 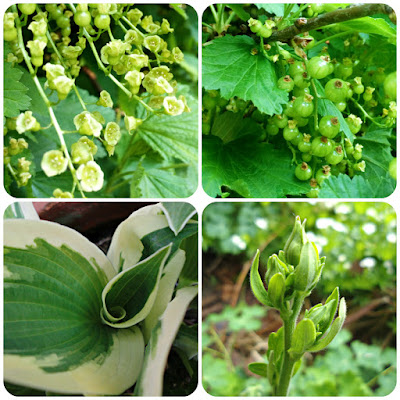 Flower buds are appearing in the Aquilegias (bottom right), who seem to have self-seeded everywhere.

While I had my camera out, I took the opportunity to snap the unfurling Hosta leaves, before they are being devoured by a waiting army of hungry slugs and snails! 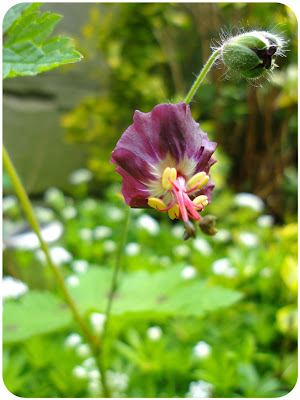 I thought we'd lost our Geranium phaeum - also known as Dusky Cranesbill, but apparently I was looking in the wrong place.

It had moved to the front of the border, where it had just opened its first graceful little flower, its colour the darkest of purples.


On Sunday, the weather being chilly but mostly dry, I donned my gardening gear: old tweed skirt, charity shopped striped sweater jacket and flowery wellies bought from a flea market. 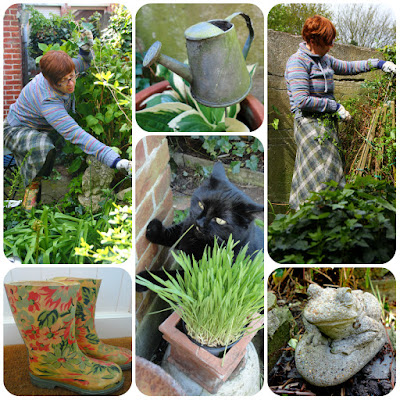 Armed with gardening gloves and my trusted secateurs, I attacked the ivy and winter flowering jasmine, which were getting out of control.

The very structure of our garden (inherited when we bought the house), makes for awkward access to the Triffid-like tangle of shoots and stems, so that I was using muscles I didn't know I had. This was made all too clear by the strained muscles in the backs of my legs for the next couple of days ... 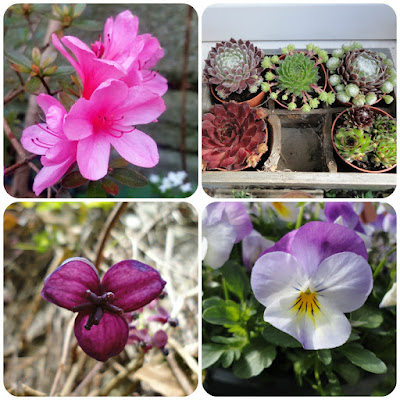 I am leaving you for now with some cheerful plants and flowers, some of which are old inhabitants of our garden.

How I applaud the resilient Azalea (top left), which has been growing in its pot, quite forgotten and neglected, for at least 15 years, but is still treating us to a couple of flowers each Spring!