Back in time at the castle

Last Sunday, we visited a castle. As it happened, a small antiques market was being held there. We were there before, two years ago, and both the castle and the surrounding domain, where a pleasant walk can be enjoyed if the weather is fine, are well worth a visit. 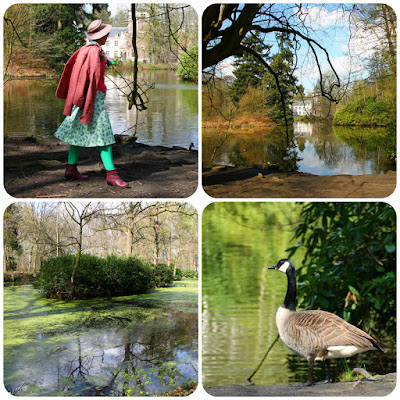 And fine it was. In spite of the forecast not being that great, it turned out to be a bright, sunny day. April at its best, in fact.

Castle de Renesse in Oostmalle is just over half an hour from Dove Cottage, in the north of the Province of Antwerp, a quiet, rural area dotted with heathland and  pine woods, the smell of which transport me back to my childhood. The village of Oostmalle's claim to fame is that it was hit by a tornado in 1967. 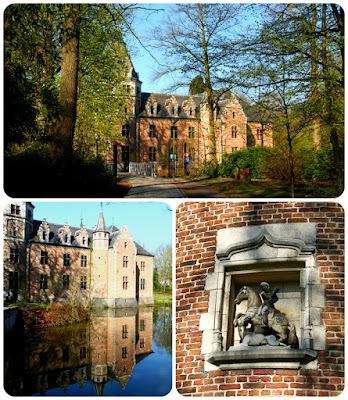 The earliest traces of the castle date from the 15th Century, the only visible remains being the keep tower.

In 1542, the castle was destroyed by raiding troops, who burned down both the castle and the village.

A couple of years later, Jan van Renesse built a new castle and outbuidings. It is said that the castle was visited by such dignitaries as Emperor Charles V,  William I, Prince of Orange and Margaret of Parma. 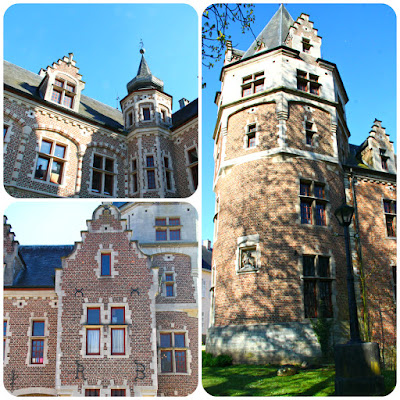 Unfortunately, in the next couple of centuries, the castle was regularly plundered and used as a soldiers' billet, until it fell into decline, and the upper court and farm buildings were dismantled in 1793.

In 1830 the de Renesse family left the castle and it was sold to a certain Viscount Leonard du Bus de Gisignies (quite a mouthful!), who converted the service buildings to a country house. An English garden was established in the park and several Sequoias were planted. 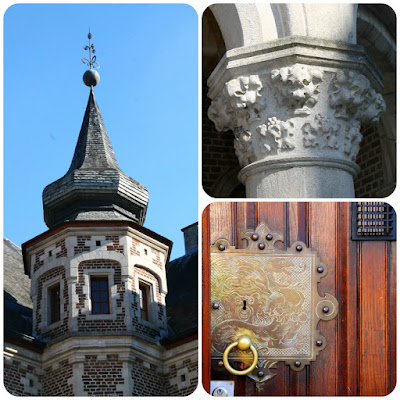 During both World Wars, German troops moved into the castle.  There's a story that during WWI, a German officer committed murder and then suicide, and legend has it that he is the notorious castle ghost, who is still roaming the castle to this day.

A final make-over took place in 1920, when the castle was renovated in Flemish neo-renaissance style. The building work, however, was stopped after the completion of the right wing.

The castle has been protected since 1982, and has been under the ownership of the local authorities since 1983. 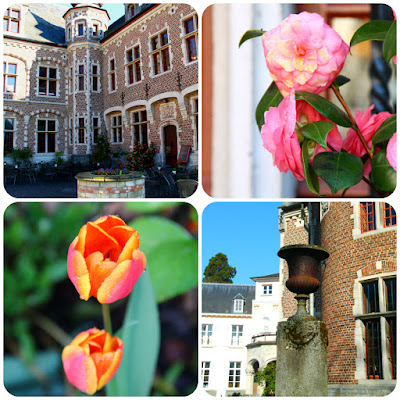 Stalls were set up on two floors, allowing us to take in the opulent, if in places somewhat shabby interior, which is awaiting the necessary funds for restoration. 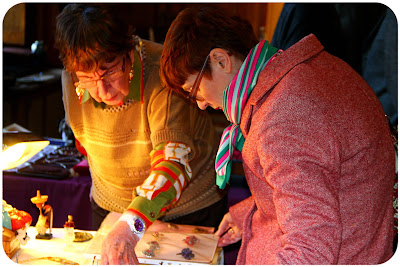 As we had hoped, the Brooch Lady had a stall, and Jos took the opportunity to take some photographs while I was browsing the many treasures she'd brought, so that you can finally meet this formidable, 85 year old lady.

I ended up buying three brooches from her. The round one with the delicately carved flowers is an early plastic one and I believe it might be from the 1930s or latest 1940s. The others are the bouquet of three flowers (top right) and the round one in the middle, which has a green stone set in a circle of tiny pearls. 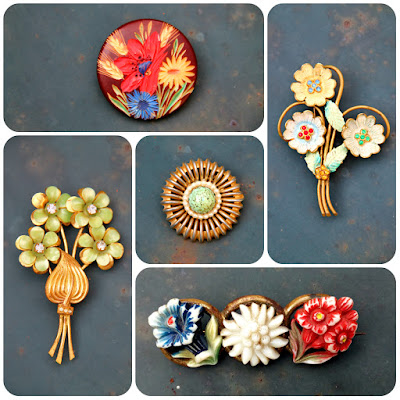 I found two more brooches at other stalls. The trio of flowers (bottom right) is a Celluloid one, which I bought from the Brooch Lady's neighbour, who apparently took a shine on me and almost halved the original asking price.

Still on the ground floor, we fell in love with this exquisitely decorated Art Deco trinket box made from green Bakelite. 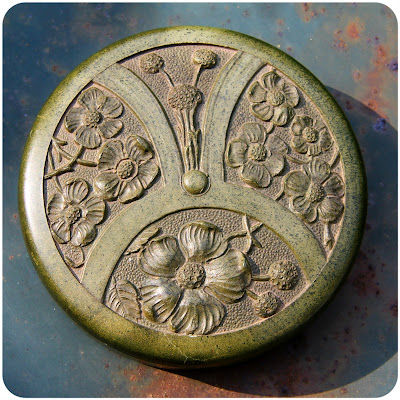 The owner told us it was produced by a Belgian company called Ebena, whose factory was in Wijnegem, near Antwerp. For only 10 years, between 1921 and 1931, they produced beautifully decorated Bakelite objects, like tobacco and cigarette boxes, bonbon boxes, toiletry sets, vases and jewellery boxes.

Ebena items are now highly sought after, so we need not worry that it will turn into another collection, as consequently prices are exorbitant! We got this one for a reasonable price as it isn't in perfect condition and has lost some of its shine. 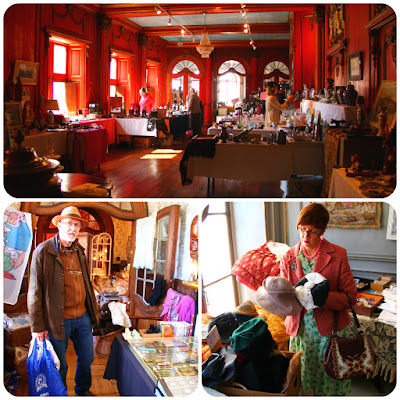 At a stall on the first floor selling haberdashery, old lace (and possibly some arsenic in an old apothecary’s case) and a myriad other little treasures, Mr. S and I both found hats, which we ended up wearing for the rest of the day. 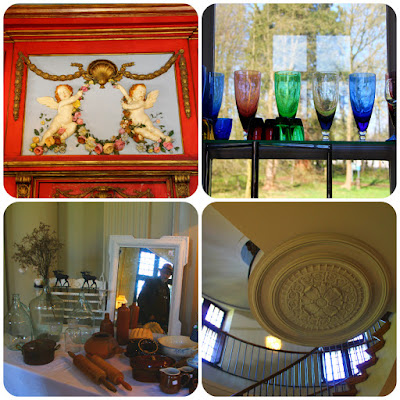 Afterwards, we returned to our car to retrieve our picnic basket, which we took to a conveniently placed picnic seat, with a view of the castle across the lake. 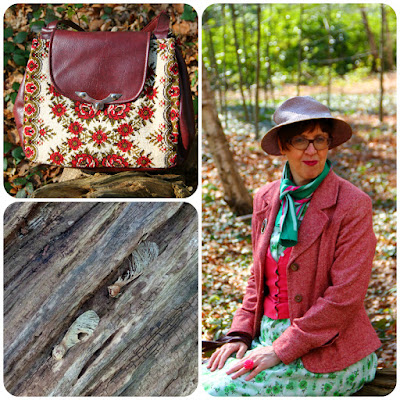 Properly fortified, we then took off for a walk around the domain.

The view of the castle over the lake is quite picturesque, so much so that a frame has been erected in the perfect spot for taking photographs. 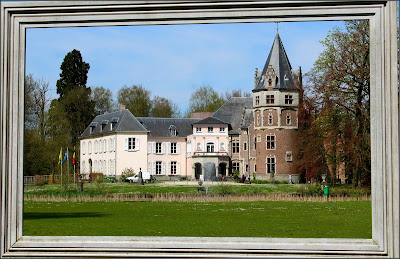 Soon we came to this little gazebo perched upon a knoll, which we climbed for a better view. It seemed to be purely for decoration, as there was no way to get inside. 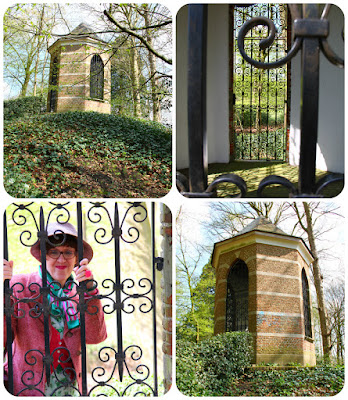 Little did we know that it was built on top of an ice house. If we'd walked around the knoll itself, we would have seen the entrance. As it was, I only found out about the ice house while researching this post! 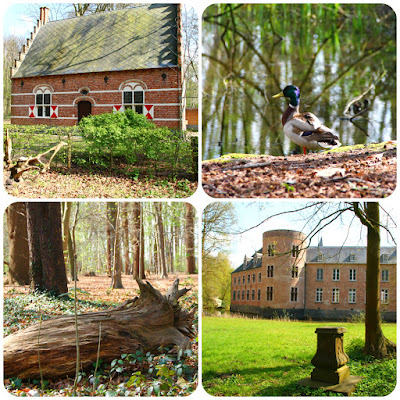 Our walk took us past a pretty little cottage, which used to be the bailiff's cottage, and which I would happily trade with Dove Cottage any time.

After negotiating the meandering paths through the park, we ended up at the back of the castle, where a magnificent, protected Sequoia was reigning over the domain. 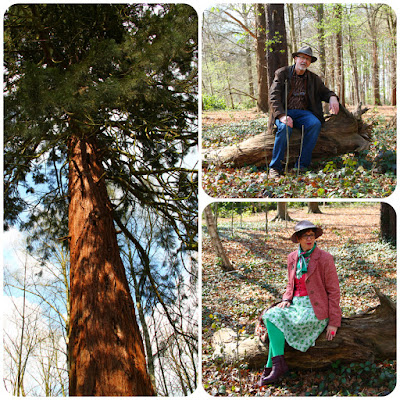 We took turns to sit and pose on a beautifully weathered tree trunk. A perfect spot to sit and stare, mourning the fact that yet another weekend had almost come to its end.

I am leaving you now with the particulars of my spring outfit: 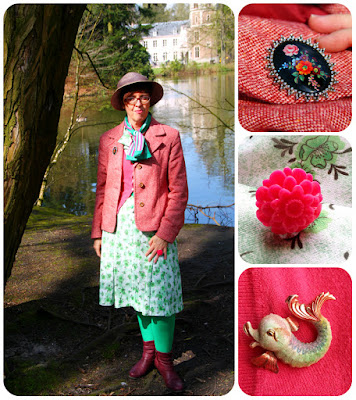