In search of lost time

Putting the clocks forward (or even worse: back!) is a stressful time at Dove Cottage, not in the least because there are so many of them.

This is mainly Jos's doing, as before I met him, I'd never given clocks too much thought.

Apart from a delicate gold watch I was given by my grandfather when I turned twelve, and my travel alarm clock - one of those ubiquitous folding red leatherette covered numbers - clocks weren't a memorable feature of my childhood home.

Admittedly, there are two clocks which I clearly remember from my childhood, both belonging to a set of grandparents.


The first, an ornate zamac clock flanked by two equally ornate statuettes, was standing proud on my maternal grandparents' mantlepiece.

If my memory does not fail me - it is after all 40 odd years ago - they were slightly Art Nouveau in style, so they might have belonged to my great grandparents.


The second, belonging to my paternal grandparents, was a traditional cuckoo clock, its obvious atrraction being the little bird putting in an appearance every hour on the dot.


When I met Jos in 1994, this Westminster chime clock, which had belonged to his father, was silent. 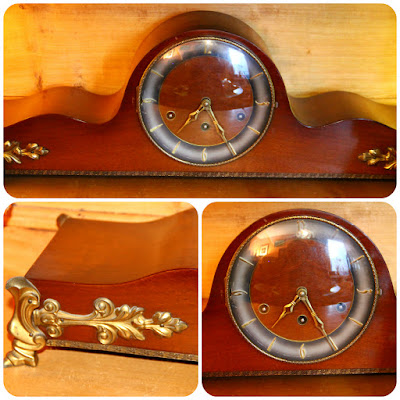 Its muteness was caused by his (later our) cat, Poesie, who had knocked it off the window sill when she was still a playful kitten. We finally had it repaired after we moved to Dove Cottage, and for the first couple of nights I hardly slept a wink due to its quarterly chime.

Recently, after many years of service, the clock went silent again, and it's currently awaiting another visit to the clock doctor! 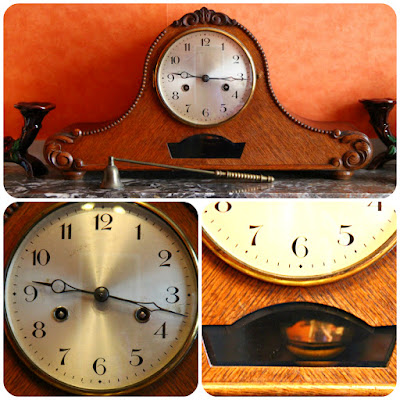 Not long after we moved into Dove Cottage, a little junk shop suddenly popped up in our village. Through its grimy window, Jos spotted this pretty wooden clock, perfect except for a missing piece of beading. Its mesmerizing tick-tock is accompanied by the hynotizing swing of the pendulum which is visible through a little window at its base. 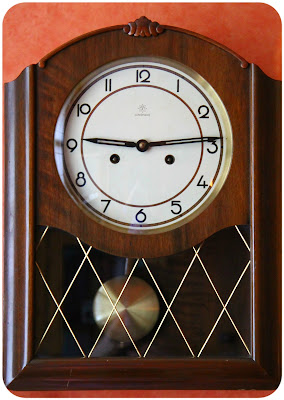 Joining this clock, which is on the mantlepiece in our sitting room, is a small wall hanging pendulum clock, which was a gift from a friend. It's by Junghans, a German clock manufacturer established in 1861, and it's in an ongoing tick-tock competition with the clock on the mantlepiece. Their out of sync tick-tocking is the perfect accompaniment to a quite afternoon of reading, although I know it would drive some people mad! 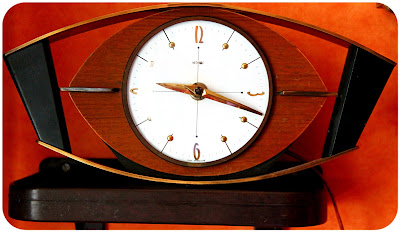 Last year, the two clocks were joined by a 1950s electric one, which is quietly humming along in the background. 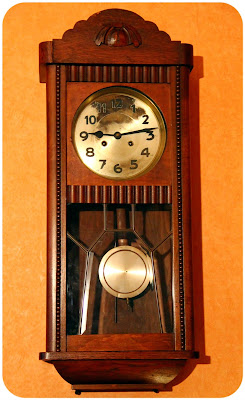 From a long defunct second hand shop came this larger pendulum clock, which lives in our dining room.

Although its face is quite damaged, the decorative wooden casing and leaded glass insert are in perfect condition. Apart from its chime running riot - which Jos was able to mend - it was in working order when we bought it.


In August 2015, we found this 1940s ceramic kitchen clock at a flea market. Unfortunately its coil had sprung so it had been sitting idle on top of a cupboard until a month or two ago when Jos took it - along with a couple of watches - to a clockmaker to have it repaired.

Last Friday, it finally returned home in full working order and it's now taking its rightful place in our kitchen. 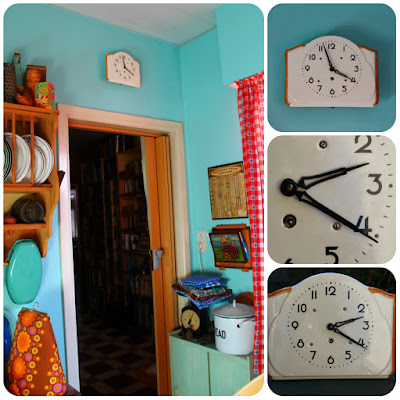 This watch also got a full service. It used to belong to my maternal grandfather, who worked at Gevaert, and was presented to him for 25 years of service in 1953.

After spending many years in a box full of odds and ends at my parents' house, it was given to Jos by my dad. 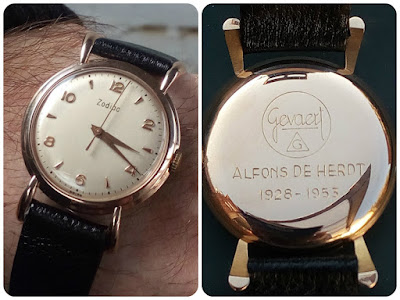 The final repair job was this dainty gold tone lady's pocket watch, which we unearthed during one of our clearing sessions at the house. 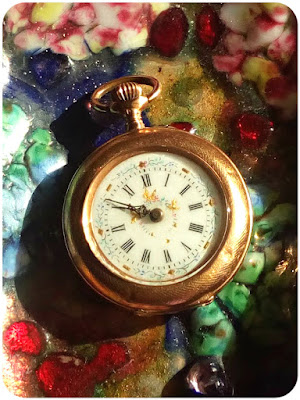 I haven't got the slightest idea who it might have belonged to.

It was missing a glass cover to protect its exquisitely decorated porcelain face, which has now been remedied.

Along with the lady's watch came a job lot of men's pocket watches. At least one of them belonged to my maternal grandfather, who I remember always wearing a waistcoat with a pocket watch, like he does in the first photo of this post.

They joined Jos's little collection of pocket watches, which includes watches inherited from his older brother and grandfather. 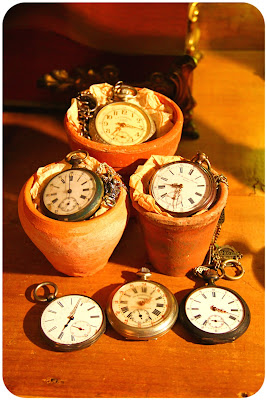 Having finally put all the clocks forward, there's just our body clocks left. These will probably be slightly out of kilter for the next week or so.

Neatly tying in with the clock theme of this post, I will leave you with a famous astronomical clock which is a magnet for tourists in the nearby town of Lier. 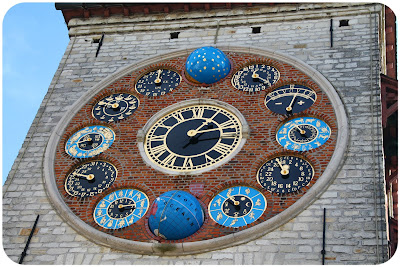 We spent Saturday walking around this delightful little town, which will be the subject for my next post. 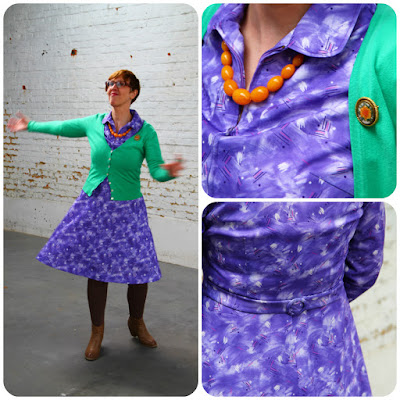 A final little clockwise twirl to show you what I was wearing, and I'm off!