Just a stone's throw from Dove Cottage lies the pretty compact little town called Lier. Although not immune for its many charms, we do not visit nearly often enough.

Last Saturday we had a good reason to pay the town a visit: Mr. S was in need of a summer hat and hadn't been able to find what he was looking for in the charity shops.
As we were recommended an old-fashioned hat shop in Lier, catering for both men and women, this is where we were headed. 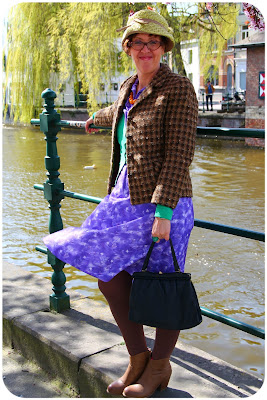 It was a bright and almost cloudless Spring day, which was only marred by a sharp north-easterly wind stinging the eyes, and often, when rounding corners, we were treated to strong gusts of wind.


You've already seen what I was wearing at the end of my previous post, but due to said wind, I needed a jacket on top.


The tweed jacket, with its cute buttons, is part of a suit, but I don't feel comfortable in its pencil skirt.

At the last moment, I grabbed this hat off Sybil (no prices for guessing why this demented looking girl is called that), who's been having the privilege of wearing it for a couple of months now. 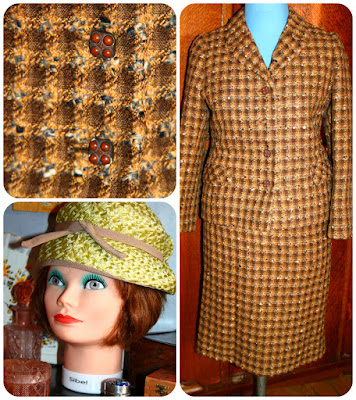 After securing the last space in a convenient parking lot, we set off to the shop, which was in a street away from Lier's busy shopping area, with just a handful of other shops and some boarded up ones as neighbours. 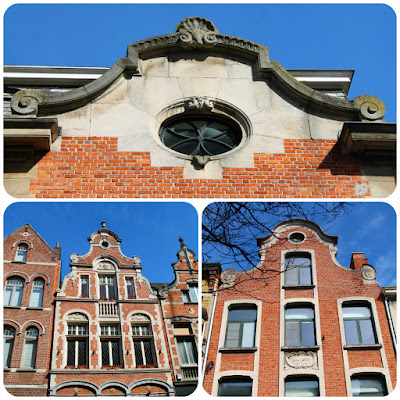 As usual, I'm always with my head in the air, quite literally, pointing my camera lens well above street level in order to catch the gems which are usually to be found higher up ... 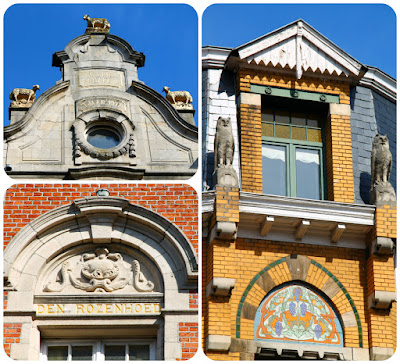 We eventually found the shop and went inside. The door to the owner's living quarters were wide open and we could see him eating his lunch. Painfully slowly, he hobbled into the shop, as if surprised by the tinkling of the shop's bell. He seemed even more surprised to find two behatted people standing inside his shop ... 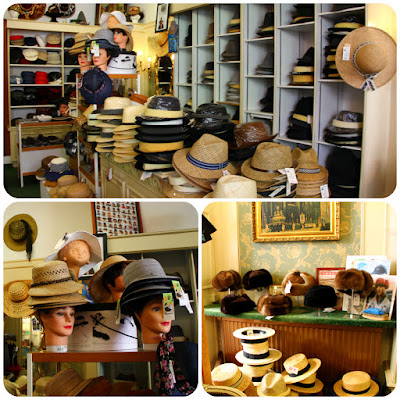 The shop was well stocked and hats were displayed on what were clearly Sybil's relatives. Nevertheless, Jos didn't immediately find what he had in mind. In the end, he settled for a beautifully crafted Panama hat, which looked like it had been made for him. 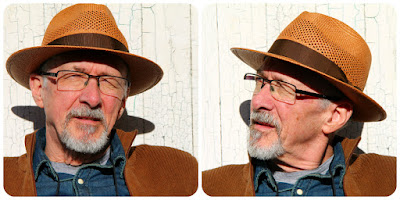 Then came the second hurdle: the shop didn't have a pin machine, so that we had to trudge all the way to the nearest cash machine near the the centre of town, and back again. 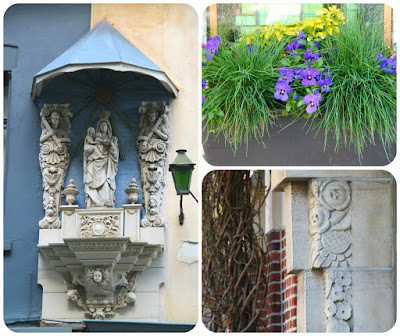 Purchase concluded, we walked back towards the town centre, passing Lier's main church, St. Gummarus, parts of which are currently hidden by scaffolding, along the way. Its tower, nicknamed the Peperbus (Pepper pot), is visible from afar, and I actually photographed it minutes after leaving the parking lot. 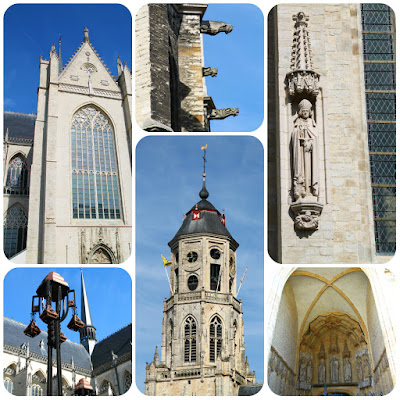 Just before the bridge which would have taken us into the busiest part of town, we turned left along the River Nete, which is flowing through the town.

It is possible to join a boat trip along the river in converted eel-fishing boats, but these only operate from April 1st. 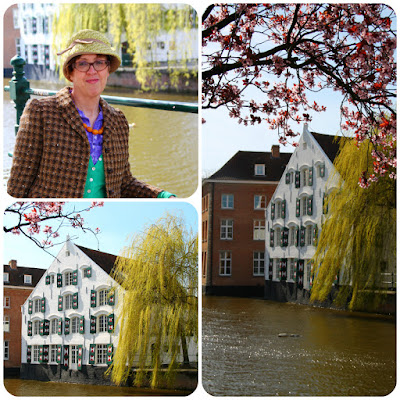 We contented ourselves with taking some photographs, which were enhanced by the blossoming Japanese Cherry trees bordering the pavement. 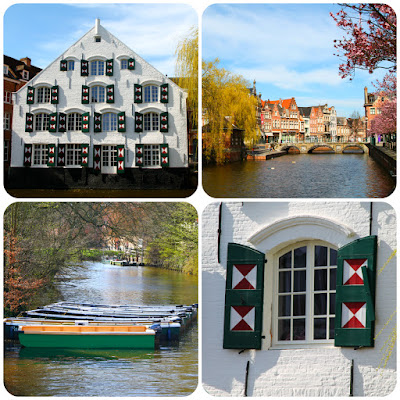 Across the river, the striking building, De Fortuin, with its cheerful red and green shutters, was calling for attention. It was built in the 17th century and over the centuries it has been used as a grain store, a coal depot, a lemonade factory, a cabinetmaker’s workshop, a town warehouse and a restaurant. After standing empty since 2010, it was restored and reopened as a restaurant last summer but I have read that it closed again after only a couple of months.

Crossing the bridge, we came to the Zimmerplein (Zimmer square), called after the tower of the same name, which used to be part of the town ramparts. 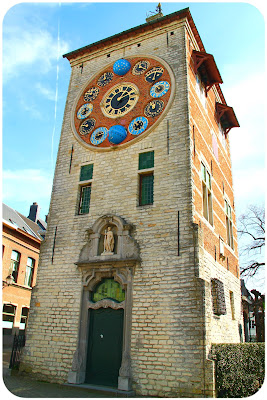 The tower is famous for its Jubilee clock, with 13 different dials, which was built by Louis Zimmer, an amateur astronomer and watch and clock maker, who presented it to the town in 1930 on the occasion of the hundredth anniversary of Belgium's independence.


After passing a sculpture group of a shepherd with his sheep, a nod to the nickname of Lier's inhabitants, schapenkoppen (sheep heads) ... 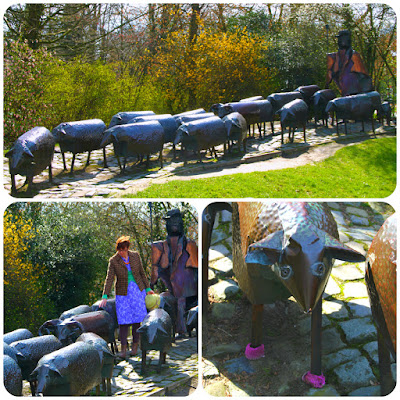 ... we were nearing our destination: the beguinage! 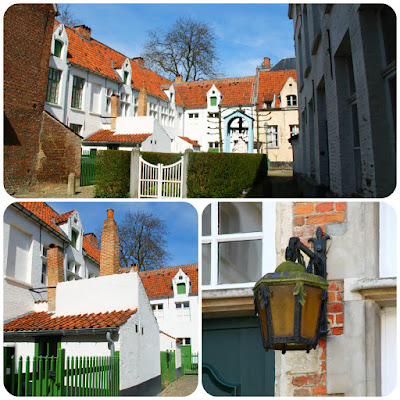 Beguinages were closed courtyards where widows and unmarried women led a religiously inspired but independent life.

Lier's beguinage, which was created in 1258, became a UNESCO World heritage site in 1998. 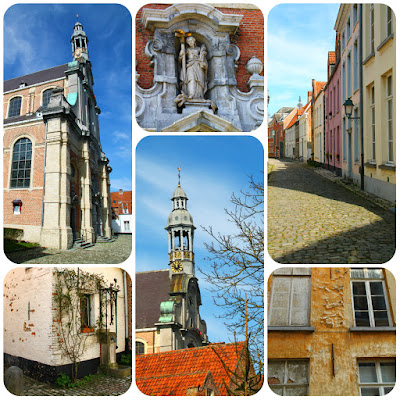 It is a typical 13th century street beguinage consisting of 11 alleys and 162 houses. At the centre is St Margaret's Church, dating from the 17-18th century.

Many tourists flock to this usually tranquil place, which is generally almost free of traffic. To our dismay and utter annoyance, a mobile home was parked right in front of the church, its owners nowhere to be seen. 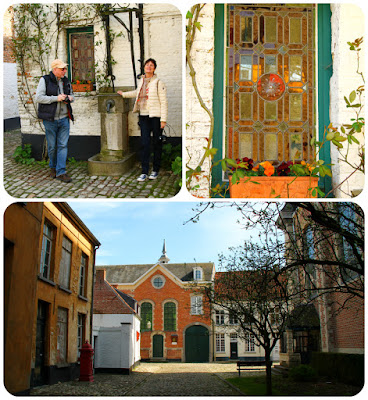 After a while, a couple with a dog appeared and were making their way to the mobile home. I had just started making grumbling noises about people and their audacity, when out of the corner of my eye I saw a couple approaching, who were clearly annoyed by the mobile home's presence too. They turned out to be our friends Ingrid and Luc! 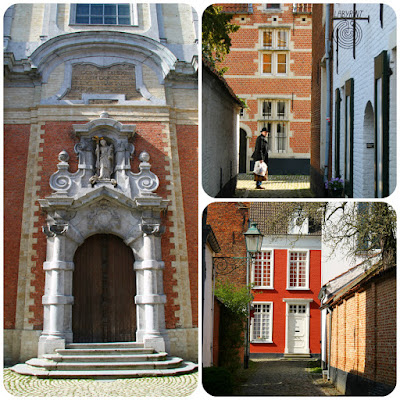 After saying goodbye to our friends, we concluded our visit with a cup of coffee, before returning to our car, just minutes before our ticket expired.

Hope you enjoyed the short visit to this pretty little town.

Posted by Polyester Princess at 20:26