Sugar and spice and all things nice

Alas, my much longed for Christmas break is now well and truly over. And what have we done? One thing is for certain: we did not do nothing. How do you do nothing, to quote  A. A. Milne, or rather: Pooh, once again? I'm afraid I don't know the answer to that.

We didn't make the mistake of making too many plans. Instead, we took each day as it came.


Obviously, some charity shopping was done, and on the sunny days, we went for short (and one slightly longer) walks, topping up the Vitamin D levels. 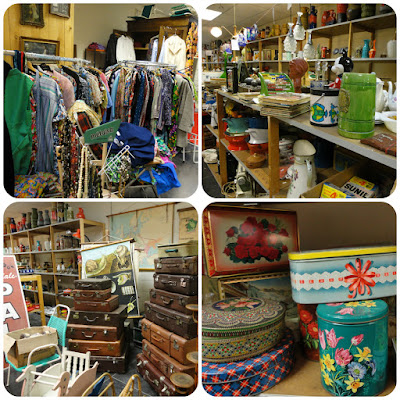 The only thing which we'd more or less planned was a visit to Expo 58, a treasure trove of a vintage shop.

About an hour's drive from Dove Cottage, it is a little bit out of our way, so we do not go there as often as we would like to. 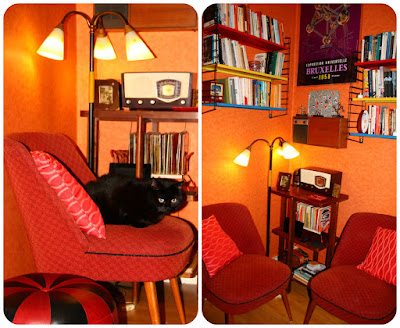 In fact, our last visit was almost exactly a year ago. Then, we came home with two fabulous 1950s cocktail chairs, to replace our old and worn out Ikea airmchairs. As you can see, Phoebe took to them immediately, so that we now have to keep the seats covered with throws. So much for having original 1950s furniture ...

It was an utterly grey and somewhat foggy day, and entering the shop was like stepping into an altogether different world. In fact, our eyes had some trouble adjusting to so much vintage loveliness. 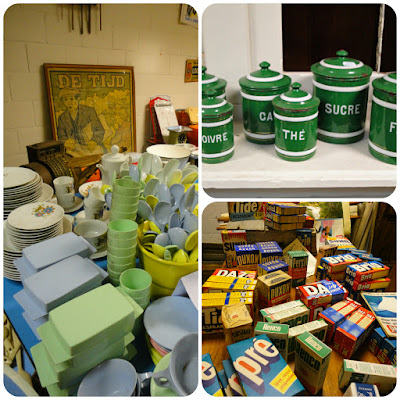 There is so much to see and choose from: vintage tins, retro vases, old suitcases, china, enamelware and assorted kitchenalia, well-remembered childhood toys, small pieces of furniture, decorative frames with or without sepia family photographs, ...  The list really is endless!

There's even a small selection of vintage clothing and textiles. 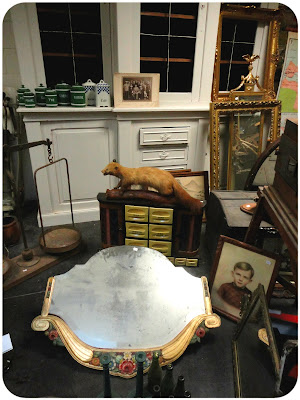 After browsing the well-stocked shelves and the bigger items taking up every available floor space, my eyes alighted on a small wall cupboard with ceramic drawers for storing kitchen staples and spices.

Can you see it, hidden behind the dusty mirror, with the poor weasel on top?


Although it was looking a bit shabby and the drawers were quite filthy, with its two little rounded doors with painted glass panes it was exactly the thing to appeal to me.

Here's a closer look, weasel and all ... 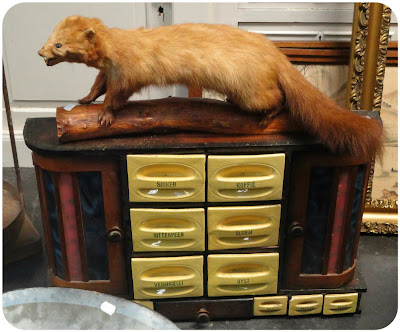 Although Jos was quite taken with it too, we soon realized we didn't have any wall space left in our kitchen.

With heavy hearts, we had just decided to leave it behind, when we heard another couple expressing their interest and discussing its merits with Stefanie, the shop's owner.

Our hearts sank even further so, when the couple eventually walked away, we wasted no further time and bought it. And no, the weasel didn't come home with us ... 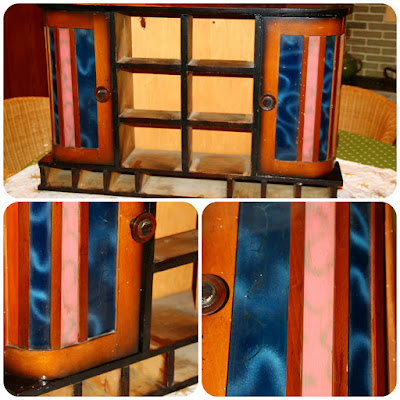 The next day, another foul and murky one, was spent cleaning it up and restoring it to at least some of its former glory.

As it had probably spent its final years not in a kitchen but in a shed, it literally took hours to wash the ingrained dirt from the ceramic drawers. 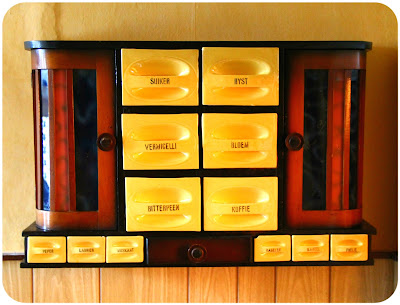 Squeaky clean and shiny, it is now taking pride of place in our hallway, at the bottom of the stairs.

For those not familiar with what is meant by "chicory", cichorei or "bitterpeen" in Flemish: these are the ground and roasted roots of a plant related to the vegetable chicory (endives), which is used as a coffee substitute. 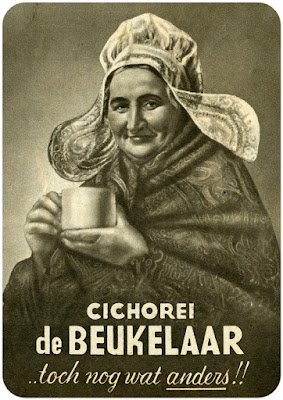 Although not as popular as it used to be, it is sometimes added to coffee, originally to make coffee supplies last longer, and drinking coffee a lot cheaper.

Here's a vintage ad for Belgium's most popular brand of "cichorei", which is still going strong today, and which is still being used at Dove Cottage! 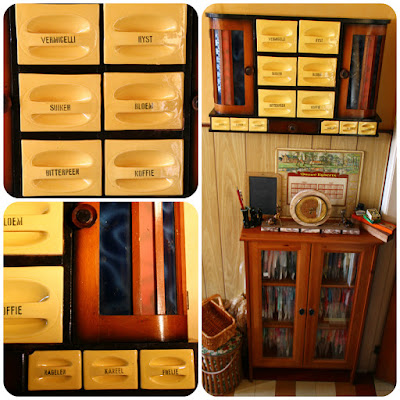 Before I bore you to death with the little cupboard, we did find a couple of other things at Expo 58 as well. 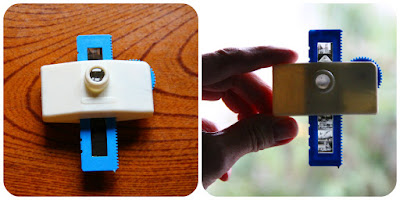 Very fittingly, there's this little viewer with a reel of slides showing images of ... Expo 58, the Brussels World Fair of the same year. 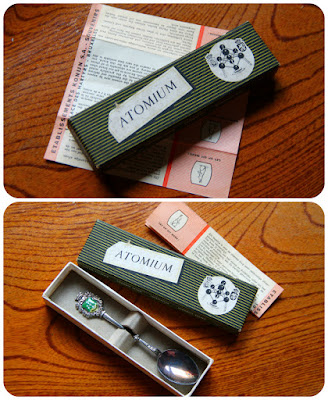 And what about this Atomium souvenir spoon, still in its original box? 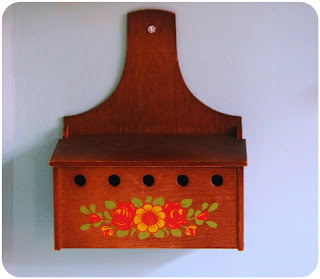 Another addition to our collection of vintage Emsa kitchenware. But what is it for? I haven't been able to find out, so any suggestions are welcome! 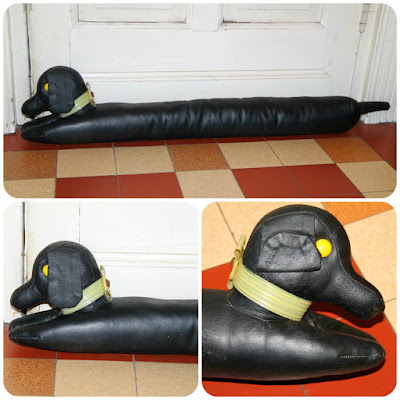 Finally, how could I forget "Bobby", the vintage draught excluder dog?

He has come in really useful these last couple of days!

Jos also made a last minute buy, but that will be for another post ...