Wake from your sleep

We won't forget our very first trip to Flanders' Westhoek back in 2012 in a hurry.

Here we were trundling along the motorway when, just after passing the city of Ghent, our car gave up on us. In the middle of the motorway! Fortunately, Jos had the presence of mind to steer her towards the hard shoulder.

As we have breakdown insurance, we made a phone-call and soon one of their mechanics pulled up in front of us. I remained in the car, and in my mind's eye I can still see him opening the bonnet, taking one look and slowly shaking his head. The verdict, which sealed our car's lot, was that the timing belt had broken.

The upside was that the insurance covered a replacement car for five days, which was exactly the length of our holiday.

A truck appeared to tow our car, we hitched a ride in the truck's cabin, and were given a replacement car, a brand new Ford Fiesta, which we liked so much that we bought exactly the same one as our next car. After all, we did the ultimate test drive, driving over 500 kilometers on all kinds of roads.

Now, I guess you are wondering what all this has to do with the next stretch of this year's holiday, but please bear with me, I'll get to that!

During that fateful 2012 trip, we visited the town of Veurne and had a little issue with parking. All inner-town parking in Veurne is with a parking disc, which is free but with a time restriction of two hours. However, our replacement car didn't have a parking disc! A kind parking attendant (they do exist!) allowed us to park and for me to stay with the car while Jos went up to the town hall to get one.

By that time, it was almost noon, so we only had time for a quick walk and some lunch before our two hours were up.

This year, we finally made up for that first visit and thanks to our friends, who often visit Veurne and even have family connections with the town, we found a shady parking spot just outside the town centre, which offered free and unlimited parking. 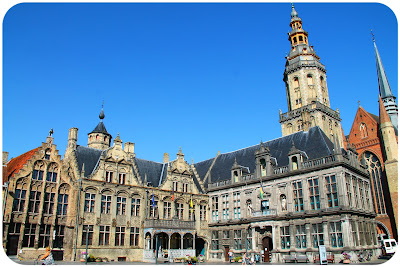 From there, it was only a short walk to the stunning market square (Grote Markt), where the majority of Veurne’s magnificent buildings are. 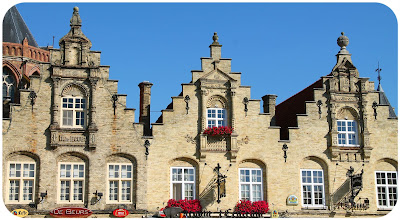 In the northwest corner is the town hall (stadhuis), built in Flemish Renaissance style between 1596 and 1612, with a blue-and-gold decorated stone loggia projecting from the brick facade. 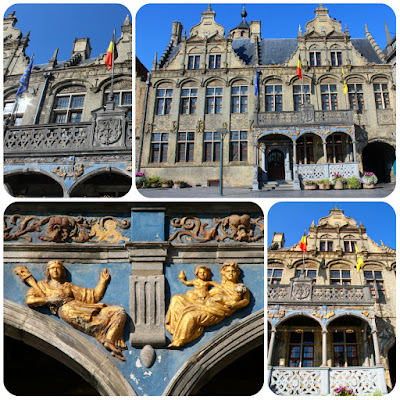 Next door is the more austere Viscount Hall (Landshuis), in pure Renaissance style, with symmetrical pillars and long, rectangular windows, which now houses the tourist office. 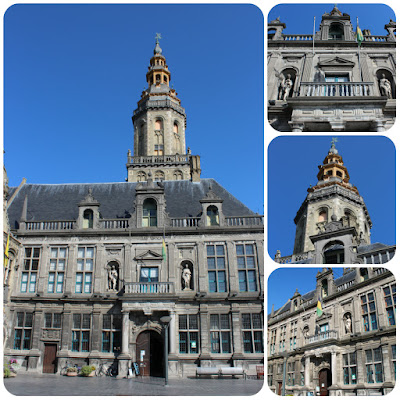 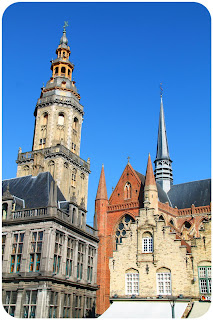 The attached belfry (Belfort) was completed in 1628, its tower dominating the square's skyline.


Behind the Belfort is St-Walburga's Church. After the original church was burnt to a cinder in 1353 it was rebuilt in early Gothic style, but money ran out and it was never finished. Finally, the church was completed in the early 20th Century when the transepts and a short nave were added. 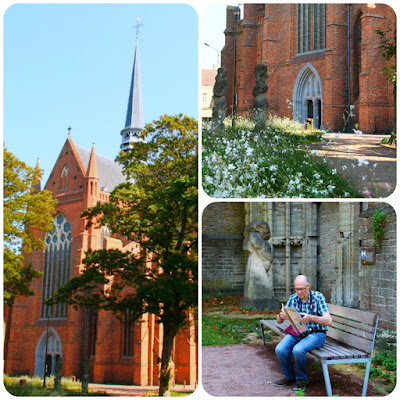 I was quite bowled over by the interior. 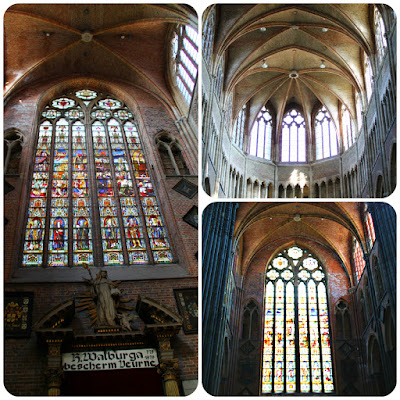 After admiring the square's buildings we paid a visit to the tourist office, where we obtained a leaflet describing a 3,8 kilometer town trail, but before heading off we had lunch at a charming little restaurant we discovered back in 2012. 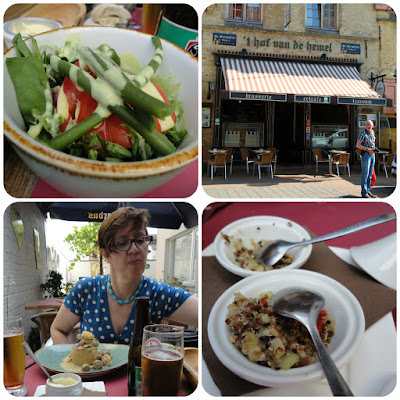 After lunch, the town trail took us along the sleepy town's back streets, predominantly lined with yellow-bricked houses, taking in the details of the many listed buildings. 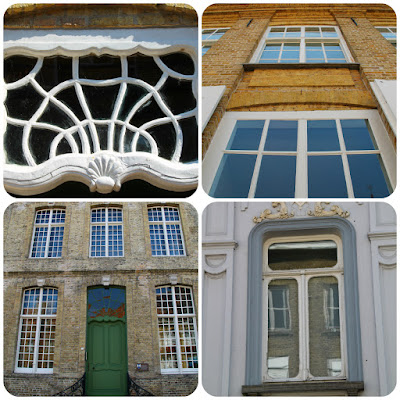 In the 14th Century, the town was hit by the decline of the cloth trade and people were leaving the town to look for work in the country, leaving the town in the hands of the retired, elderly people, living of private means, who were nicknamed “slapers” (sleepers). This in time became the nickname for the inhabitants of Veurne in general, hence this post's sleepy title. 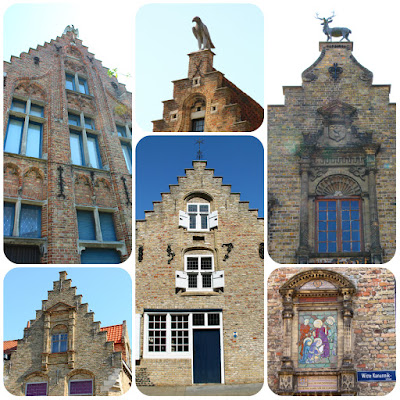 The reason why Veurne's architectural beauties have survived the Great War and hardly suffered any damage, is because it was saved by the deliberate flooding of the River Ijzer, which effectively stopped the German progress to the sea. 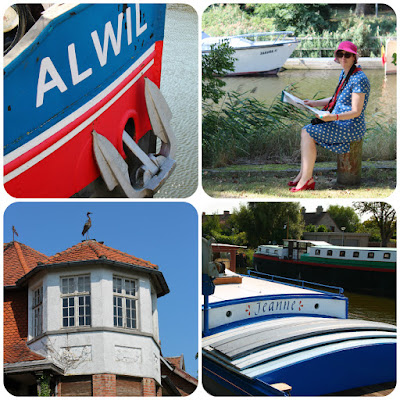 The walk eventually led us to the canal at the outskirts of the town, where we sat in the shade to cool down and rest our wary feet, although I was wearing my red Clarks shoes, which didn't hurt a bit! 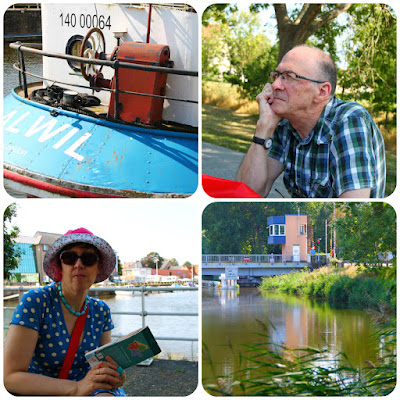 Enough already with the architectural and historical details, this leads me flawlessly to the dress I'm wearing, which for once isn't vintage nor even second hand. 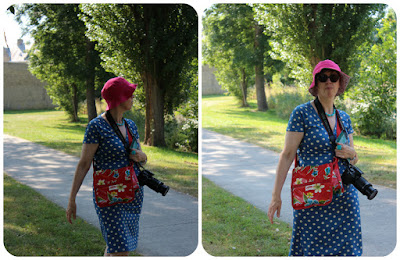 This one is from Amsterdam based brand King Louie and was bought in the sales a couple of years ago. When packing, I threw in this dress, as well as the differently patterned one I was wearing while out cycling, at the last moment.

They both  proved to be very comfortable and practical for any outdoor activities, while looking pretty at the same time, so I think they will be a holiday staple from now on.
Posted by Polyester Princess at 11:51