The age of miracles

We'd booked our little holiday in Belgium's west country back in May already, so that we'd have something to look forward to after coming back from Wales.

In fact, we have been treating ourselves to a couple of days at the same place in early September for quite a few years now.

This year, with my dad being so ill and passing away only days after being admitted to hospital, it looked like we'd have to ditch our plans. In the end, we decided to go ahead, leaving a day later than planned, after the funeral. 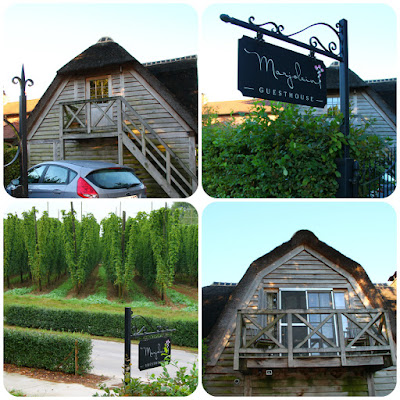 Our home for the week, "Marjolein Guesthouse", is a small first floor studio situated above the owner's carport, in a wonderful thatched wooden building.

It's got everything you can think of: a small dressing, sitting area, kitchenette, breakfast nook and bedroom, all-in-one, with a compact little bathroom leading off the main room. 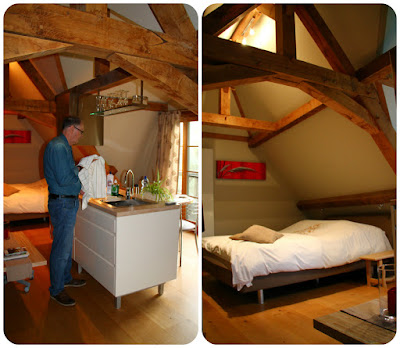 Although the interior might be a little too minimalist for our taste, the view from the breakfast nook and balcony more than makes up for this. 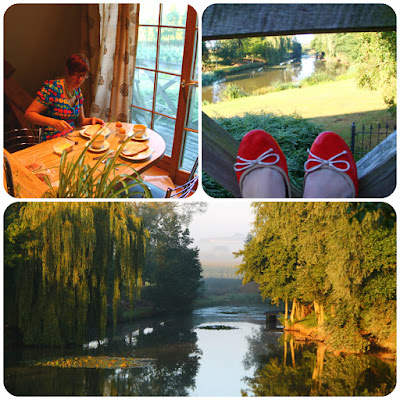 It's on the outskirts of the quiet country town of Poperinge, only a few kilometers from the French border.

Poperinge is Belgium's hop growing capital and in fact our little home looks out on one of the town's many hop fields.

Hop picking began on our second day. If this conjures up romantic images of times past, then you'd be disappointed, as everything is now being done semi-automatically, taking only one or two people working a special hop picking machine, leaving the hop poles bare in just a matter of days. 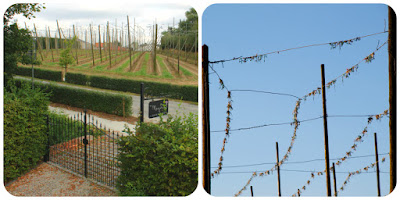 About 15 kilometers from Ypres, the epicentre of the infamous "Flanders Fields", the whole area is steeped in First World War history.

The countless military cemeteries, with row upon row of identical white gravestones, are very evocative and thought provoking. 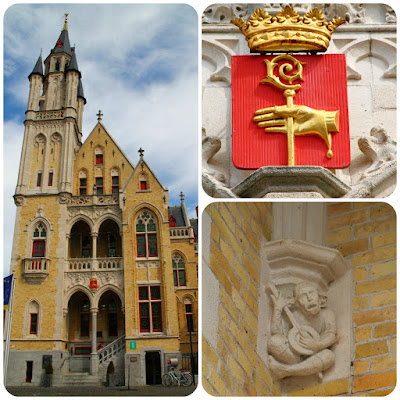 Poperinge itself boasts quite a few fine buildings, one of them being the town hall, built in 1911 in neo-Gothic style by the architect who was also responsible for the reconstruction of Ypres after the Great War. 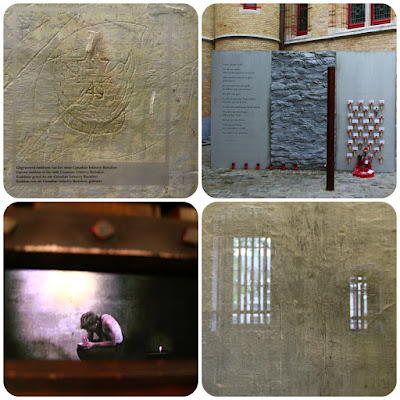 The town hall has a dark secret: in the courtyard at the back the death cells and execution pole, where deserters faced the firing squad, can be visited. Quite a chilly experience, especially as in one of the cells you can see a cinematic impression of a soldier waiting to be shot at dawn. You can also see some of the graffiti left by the prisoners. 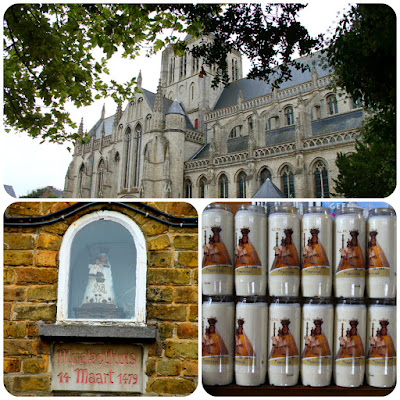 The town also has several richly decorated churches which are well worth a visit. This year we went to see the St. John's Church (St. Jan's Kerk), a well-known place of pilgrimage. It is connected with the nearby Miracle House (Mirakelhuisje) where it is said a stillborn child was brought back to life by Our Lady of St. Jan. 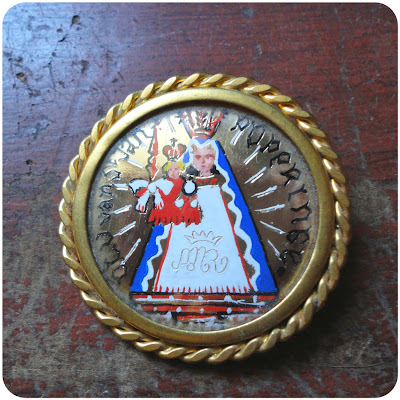 The reason we chose to visit this church, which is a little out of the way, is that by coincidence, I found a brooch dedicated to Our Lady of St. Jan at a flea market last year, which attracted me because of the Poperinge connection. 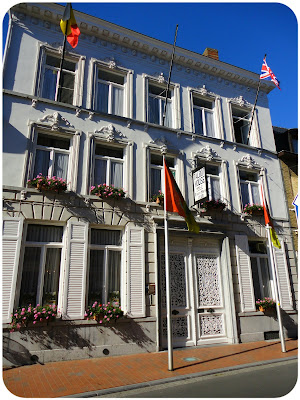 Poperinge's major claim to fame, however, is Talbot House, which was opened in 1915 by British army chaplain Philip Clayton as a soldiers' club.


During the Great War, Poperinge was part of unoccupied Belgium. Away from the turmoil of battle in the Ypres Salient, the town became the nerve centre of the British sector. 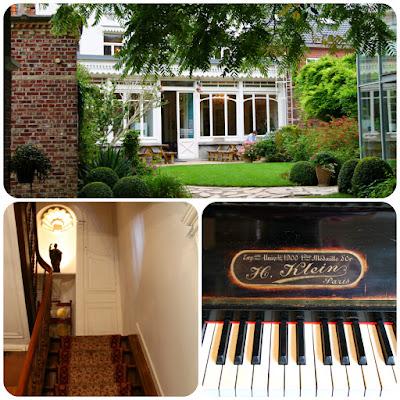 Talbot House provided rest and recreation to all soldiers coming in, regardless of their rank. 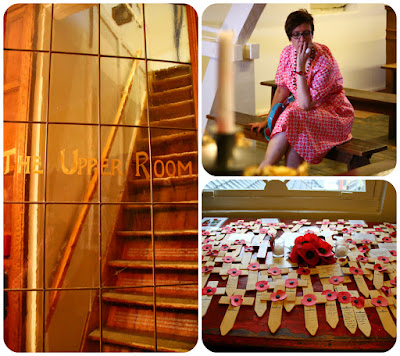 Talbot House is still run by British wardens, and all visitors are offered a cup of tea or coffee and cakes, included in the ticket price. 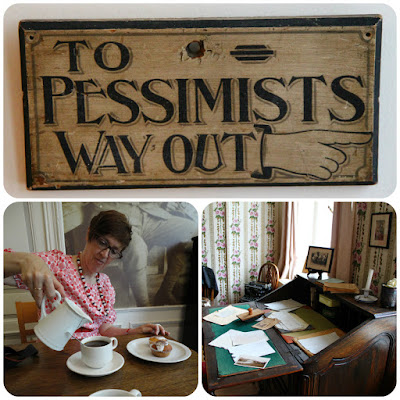 Chaplain Philip Clayton, who was known to all as "Tubby", insisted that Talbot House had to be a place where people could forget about the war for just a moment, hence the sign next to the front door saying: "To pessimists, way out!" 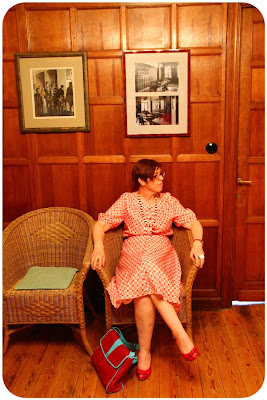 We concluded our first round of sight-seeing by a relaxing walk in the local park, after which we retreated to our fairytale cottage to enjoy the view from our balcony. 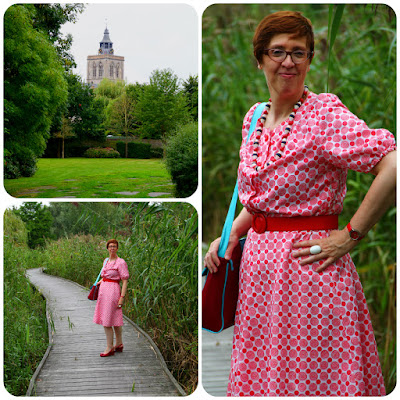 I hope you will join me again on my further adventures in Belgium's west country in my next post.
Posted by Polyester Princess at 20:11