On Saturday the 10th of September, we woke up to weak rays of sunlight trying to get the better of the overall layer of grey. Checking our weather app to see what the day would have in store for us, we were surprised when, contrary to earlier forecasts, it told us it would be mainly dry, with only a slight chance of rain. Nevertheless, we decided to stick to our original plan, and start the day with an indoor activity.

And no, it did not involve a ride in the time machine! Or perhaps it did, in a way, as the first part of Saturday's adventures was a trip back in time. 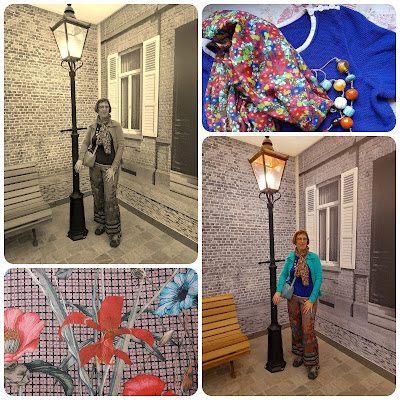 Instead of taking the time machine, however, we hopped into our car, finding ourselves in the pretty little town of Lo just over twenty minutes later. There, just a stone's throw from its market place, is the visitor centre of Biscuiterie Jules Destrooper, set up in their old factory premises.
The last time we were here, in 2017, a delicious smell of baking was still lingering in the air, but the last of the production lines was closed two years later, when the entire production was moved to the company's larger facilities in Ypres. 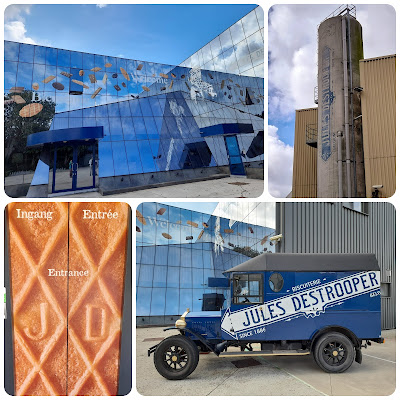 Foolishly, I'd only checked the visitor centre's website minutes before our arrival, which is why I only saw the Book a Spot button at the very last moment. Nevertheless, we decided to give it a try and see what happened. Judging from the number of cars and the coach parked in the spacious car park, it was quite busy - it was a Saturday after all - so it was with some trepidation that we approached the building and took the lift with its waffle-patterned doors to the first floor.

The nice lady at the ticket office assured us that there was no problem to fit us in as long as we didn't mind the inevitable crowds. Thankfully, these turned out not to be of the school children on an outing variety. Instead, there were one or two well-behaved groups, who seemed to be a couple of steps ahead of us, so that we could enjoy our visit and immerse ourselves in biscuit-making history in relative peace. 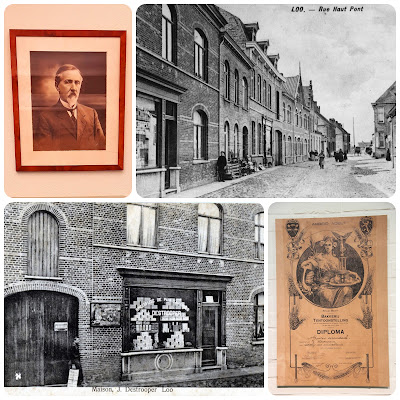 It was on 8 August 1885 that Jules Destrooper opened a small bakery in the town of Lo, which at that time still went by the old Flemish spelling name of Loo.
Ambitious by nature, he combined his bakery with a shop in colonial wares from Africa and Asia. An inspired idea, because that’s how he distinguished himself from the five other bakers in the village. Indeed, customers travelled to Lo especially for Jules’s coffee, tobacco, chocolate and spices.
At one point, Jules started using the spices from his shop to make wafer-thin Almond Thins, which he gave to his customers as a promotional gift. Soon, people started flocking to his shop for his Almond Thins rather than for the exotic merchandise. Jules immediately saw the potential of these popular biscuits and the rest, as they say, is history. 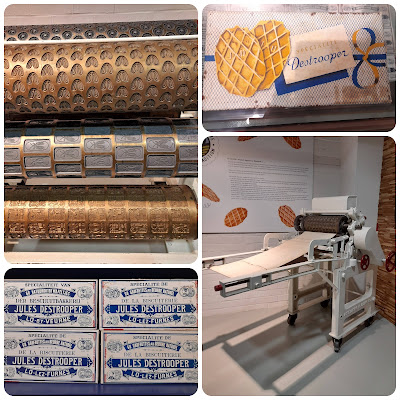 While the Almond Thins are still popular, it is the Butter Crisp (or "Lukke" in the local dialect), the crunchy thin waffle with its iconic diamond pattern created in 1890, which is the company's showpiece. It was named after the traditional biscuits that women in West Flanders would bake around New Year to give to family and friends as a way of wishing them good luck and prosperity.
The visit ends with a biscuit tasting opportunity and, very cleverly, the way out is through the shop, where all of the twenty-two current biscuit varieties are for sale. By the time we finished our tour, most people were queueing at the till, with only a handful of stragglers still stuffing their faces with free biscuits. We were promptly assigned a table for two, offered free cups of coffee, and obviously proceeded to do some sampling ourselves. The chocolaty ones were particularly yummy! 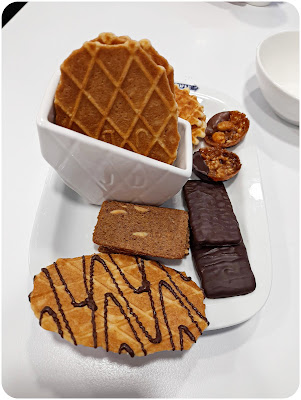 Afterwards, we left our car in the car park and proceeded to walk the 100 metres or so to the town's market square. The temperature, in the meantime, had climbed to nearly 20°C, so that it was balmy enough to leave our coats behind.
The market square is a gem, complete with adjacent village green and pond. On the far side of the green, the abbey of the Poor Clares is taking pride of place (below, top left and bottom right). The abbey was established in 1492 after the nuns arrived in Lo to nurse the plague victims. Enlarged in the 16th and 17th century, it now functions as the town hall after the nuns sold it to the town authorities in 2008.
Belgian readers might recognize it as the site of the town hall and police station in the Flemish comedy police series Chantal currently airing on Belgian television channel Eén, starring inspector Chantal Vantomme played by the wonderful Maaike Cafmeyer. 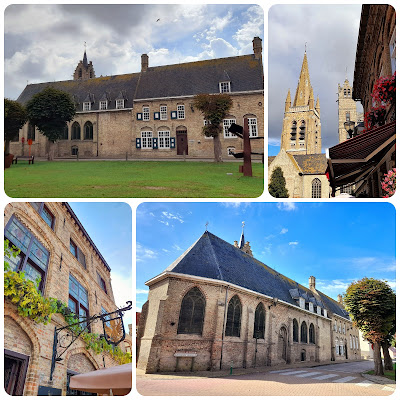 The square is dominated by the old town hall (below, top left and top and bottom right), built between 1565-1566, and its belfry, which were inscribed on the UNESCO World Heritage List in 1999.
The semi-detached tower housed the town clock and a  miniature carillon. Two tower is supported by two pillars with rounded arches, at the bottom of which is a plinth where official announcements were read. Above the entrance is a gracious wrought iron sign with the coat of arms of the town (above, bottom left). 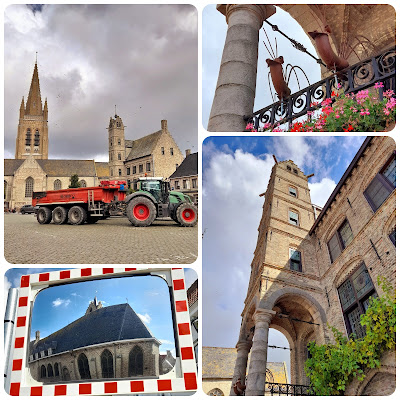 The insect-like iron creatures on the wrought iron railings are works of art and part of the annual sculpture and poetry festival which takes place here in the Summer months.
Various works of art by different artists are displayed along a 2 kilometer heritage walking trail in the town centre.
I particularly loved the stainless steel, iron and bronze sculptures by Theo Claerhoudt (below, bottom left) and the inox horse's head by Roger Pintens in the abbey garden next to the church 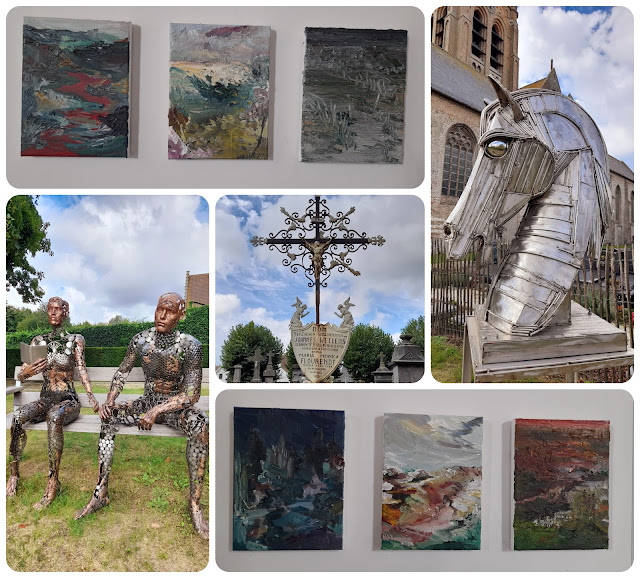 I was also enamoured with the series of tiny oil paintings by Anne Vanoutryve, which were displayed inside the Neo-Gothic Sint-Pieters-Kerk (St. Peter's Church).
The church used to be part of the local Augustinian abbey and was already mentioned in 1119. It has been repeatedly rebuilt. The side towers, the south transept and the aisles were built between 1435 and 1496. 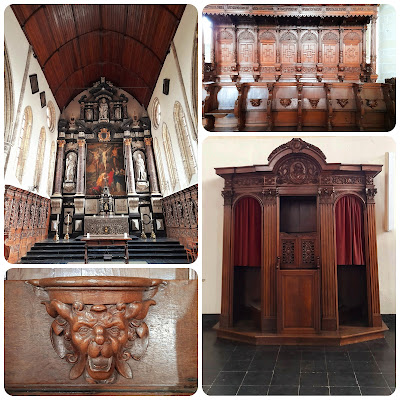 Upon entering the church, one is struck by its Renaissance opulence and its wealth of church treasures dating from the 17th and 18th centuries. The wood carvings too are of exceptional quality, notably its richly carved misericords and a prime example of a confessional.
The intriguing tower which beckoned us at the end of a cobbled lane is actually a tall dovecote.
The building was erected on the domain of the former Augustinian abbey in 1710, when a guy named Patricius Fraeys was its abbot. The tower has 1132 pigeonholes and apparently some pigeons are still nesting there. 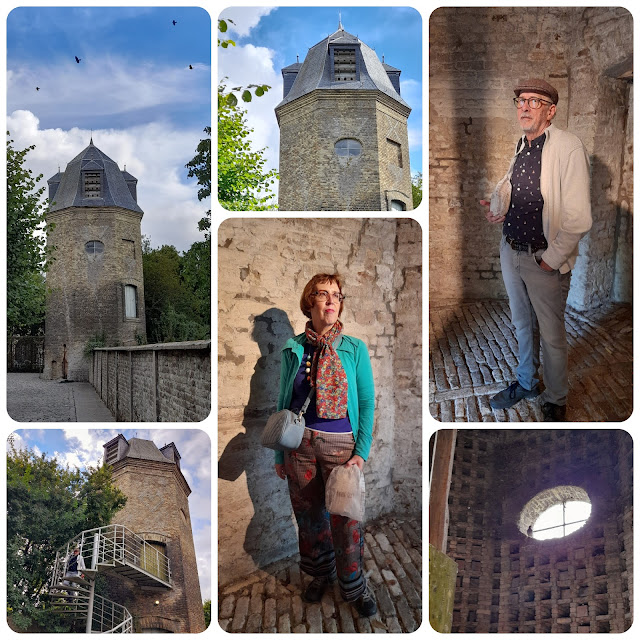 If you are wondering about our serious faces, we were enraptured by one of the poems which were part of the festival, and which could be listened to at the touch of a button.
Leaving the tower, we could see dark clouds approaching, so we quickened our step and returned to our car, which by now sat on its own in the visitor's car park. Indeed, we'd only just made it inside before the first raindrops started splattering our windscreen. Much to our relief, it didn't last long and, as it was well past lunch time by now, we had a car picnic while waiting it out. 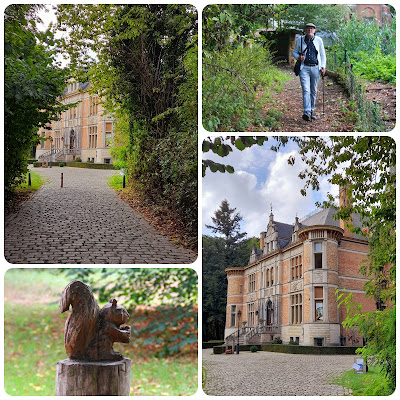 Another 20-minute ride took us to our next destination, nature reserve De Blankaart, which lies on the edge of the River IJzer's flood plains.
This is a provincial domain with a large car park and a visitors centre which is housed in a picturesque castle. Originally built in 1860-1870, the current castle only dates from the 1920s as only its façade was spared the destruction of the First World War. 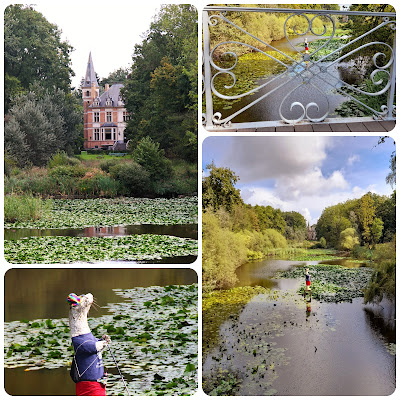 The castle is surrounded by a large park, beyond which lie watery grass and reedlands, with the vast IJzer wetlands behind them. It is the starting point for a choice of walks, one of which we did back in 2020. I'm sure you won't be surprised if I tell you that, in spite of the existence of the ubiquitous hexagonal signs indicating the walk, we managed to get lost quite early on. We did make it in the end, though.
This time we knew where we were going, even if we were only planning to do part of the walk.
Soon we reached a bridge with a decorative iron railing, offering the most wonderful view of the castle across a waterlily pad filled lake resided over by the statue of an otter. For some reason the weathered stone otter was now wearing shorts, a shirt and a cap! 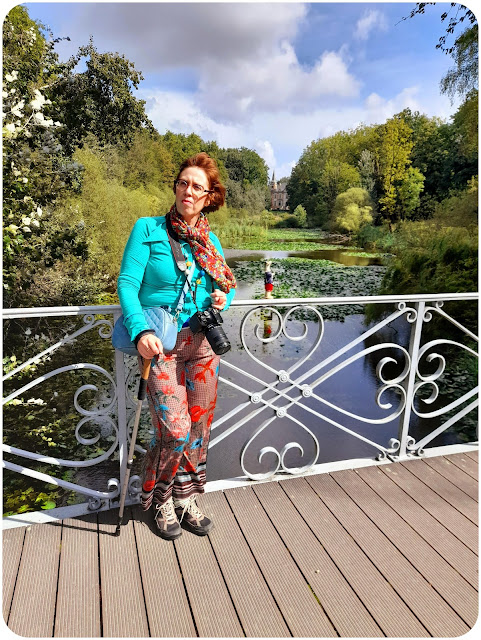 Same as in 2020, there was a fierce wind blowing and playing havoc with my coiffure, although at about 22°C it was a couple of degrees warmer this time around.
I was wearing my Wow-To-Go shirt as a jacket on top of a three-quarter sleeved blouse, which you can catch a glimpse of in the opening collage. You'll recognize both the shirt and my Zara trousers from Wednesday's walk. All items charity shopped except for my walking shoes and crossbody handbag, which is my usual travelling companion. 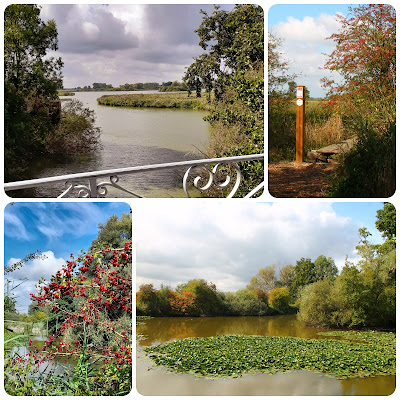 Our walk took us on a succession of trails and boardwalks through meadows and marshland, offering a variety of panoramas. The calls of the many waterbirds who are lucky enough to call these wetlands their home only added to the magical atmosphere of this enchanting stretch of nature. 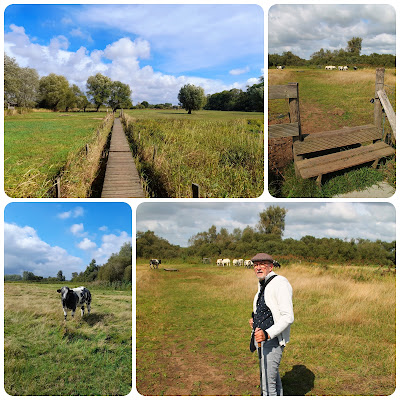 At one point, the boardwalk we were walking on ended at a stile, beyond which a herd of bored looking cows were waiting. Most of them hastily retreated at our approach, except for the one on the bottom left, who stood his ground and willingly posed for a photo. 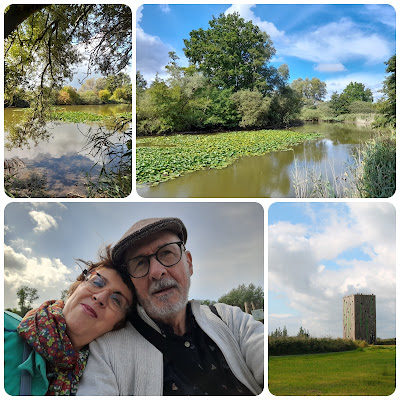 We briefly took a breather and a snack on a bench, taking a rare selfie in which we don't end up looking too silly. Then we continued, getting closer and closer to our goal, which is the tower-like structure on the bottom right.
This is one of the reserve's watchtowers doubling as bird hides and climbing it rewarded us with a wonderful view over the wetlands.
The Summer drought, however, had left the landscape looking brittle and dry and there was noticeably less water compared with two years ago. 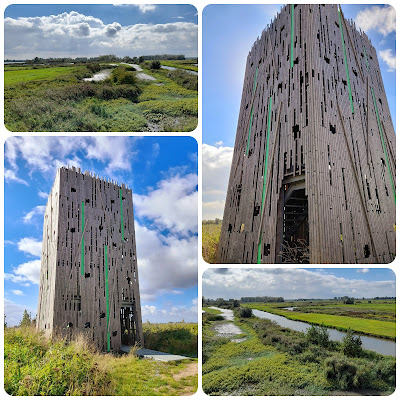 Back then, our walk continued past the tower until we reached a tarmacked lane, eventually veering off through a meadow and back to the reserve.
This time, we just walked back the way we'd come, ending the day's adventure with coffee and a pack of waffles, which we had to share with this greedy creature. 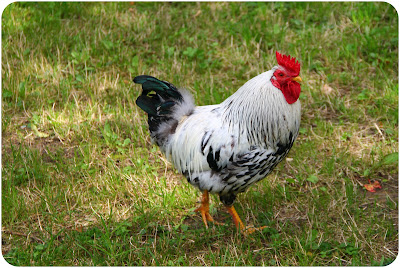