All too soon, our September getaway was nearing its end.

But let's not be too hasty!  When we woke up on Sunday morning the 11th of September, we still had two days ahead of us, and we fully intended to savour every minute of those.

What's more, the weather gods had decided to play nicely for a change and graced us with some glorious late Summer weather and temperatures climbing towards the mid-twenties. 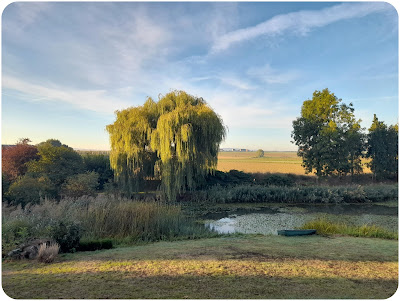 Still, making plans for that Sunday wasn't exactly straightforward. Apart from the gorgeous weather enticing more than the average number of people out of their homes, we had to contend with the fact that it was Open Monuments Day, which ruled out quite a few places for being too crowded. 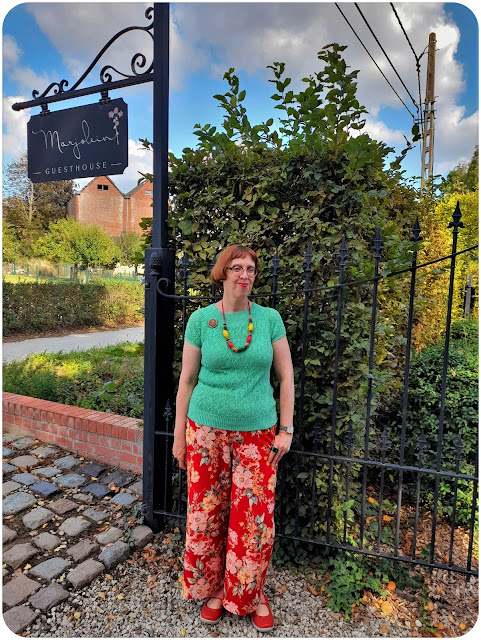 We decided a walk would be our best option and, after some head scratching and consulting the map, we opted for Hellegatbos, a nature reserve near Westouter, in the glorious hilly countryside to the south of Poperinge called Heuvelland, and close to the French border.

This was in no way new territory for us. When we last walked here in 2020, it was on a mid-pandemic weekday, when we hardly met a soul.

On this sunny Sunday, however, the place was inundated with walkers from both sides of the border. To make matters even worse, there seemed to be some kind of equestrian event going on, so that we had to share some of the paths with horses and carriages. 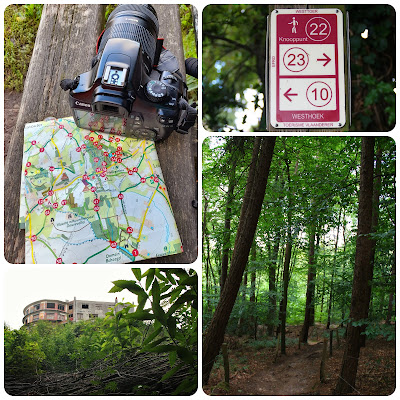 Truus, our Satnav, turned out to be in one of her funny moods as well, as she initially made us drive past the entrance to the car park. Then, when we finally got there we had to make a U-turn as the place was completely taken over by the horses and their entourage. There was no option but to park at the side of the busy road leading to the French border, by which time the morning was well advanced. 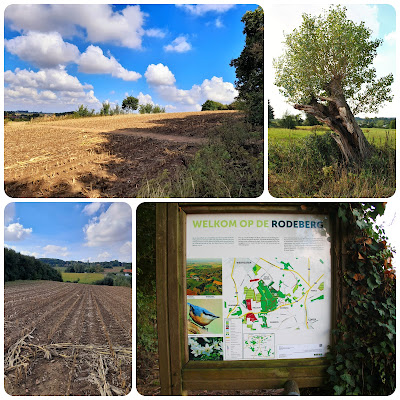 Hellegatbos (bos is the Dutch word for wood) lies on the slopes of the 129 m high Rodeberg, and the entrance nearest to where we'd parked our car gives access to some seriously up-and-down woodland paths and steps. We were mostly going down for now, but fully realized that we would have a serious climb ahead of us on our way back.
The derelict building you can catch a glimpse of in the previous collage is situated at the edge of the car park. Dating from 1934, it was part of a popular youth hostel called Kosmos, but fell into disrepair after its demise in 2005. Apparently, there are plans afoot to turn it into a luxury hotel.
Gently guided by one of our handy maps based on numbered markers, we just followed our noses, our main objective being getting away as far as possible from all the hustle and bustle. 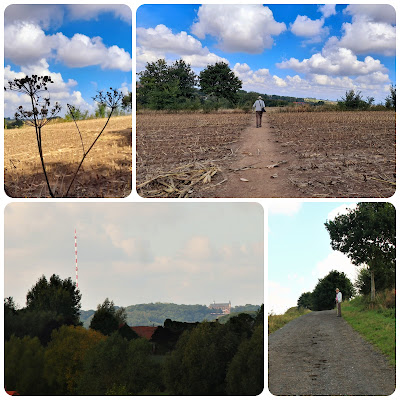 As a result of our late start hunger pangs soon got the better of us, so when we emerged from the woods and spotted a bench with a view, we wasted no time in claiming it.
Most of the fields had already been turned to stubble, their barrenness contrasting greatly with the fluffy cotton wool clouds drifting across the brilliant blue sky.
In the distance, we could see the red and white striped television transmitter, which on a clear day is visible from our cottage's balcony. The transmitter is on top of the 150 meter high Catsberg, which is actually in France! A little further to its right is the abbey of Sainte-Marie du Mont, where cheese and beer is still produced by Trappist monks. 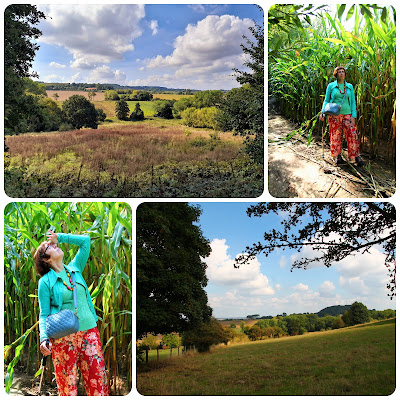 By now, our walk had taken us on a stiff climb, with a panorama across the Sulferberg - yet another nature reserve (above, top left) - awaiting us at the top. Then it was back down again and along a sandy path skirting a cornfield, until we arrived at the edge of the woods again.
Here's the point where we got a bit lost, although this time it wasn't our cartophobia which was to blame. All would have been well if those horse people hadn't blocked our way by cordoning off the car park which we needed to cross to get back to those woodland paths. Eventually we did get back on track but not before having to shuffle pas a row of whinnying horses which had been parked while their riders were enjoying a barbecue! 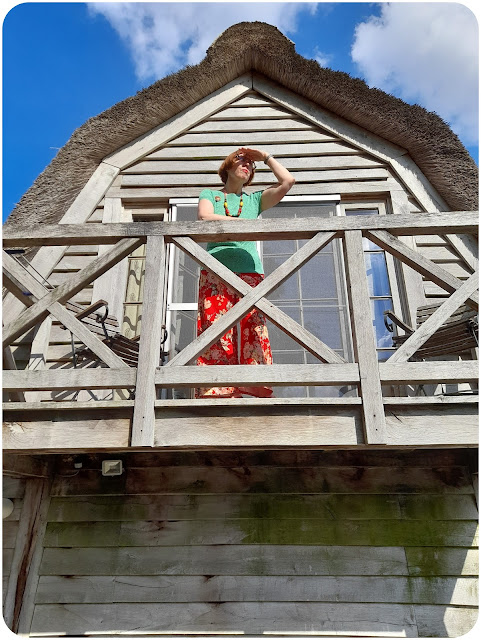 I will not mention our botched attempt to drive to a well-known viewpoint on the area's highest hill only to find it closed for instability reasons. Or the fact that our Satnav insisted in driving us around in circles. By then, we'd had enough so back to the cottage it was!
We spent the rest of the afternoon enjoying the ever-changing view from the cottage's balcony.
At one point we spotted Chablis, cottage host Marino's cat, sunning itself in the dinghy moored at the side of the lake. 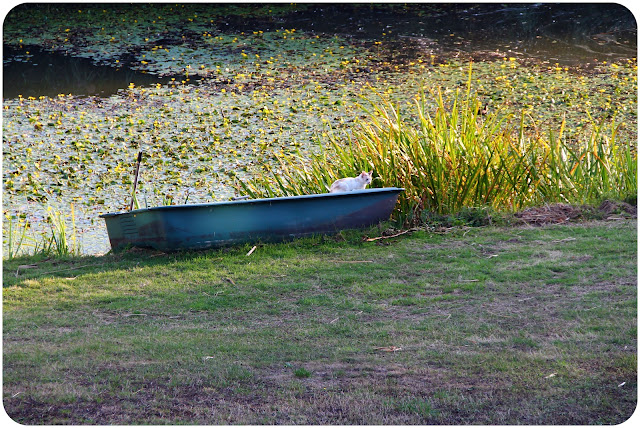 We ended the day by going for dinner, for which I changed into my vintage maxi skirt and green spotty peplum top. The teal blazer I wore on top is an old charity shop find, and was added to my luggage at the last moment.
Dinner was in honour of my birthday, which would be on Monday. However, with lots of restaurants having their closing day on Monday, we decided to celebrate on Sunday night instead. As I was born at twenty minutes after midnight this would be closer to my actual time of birth anyway! 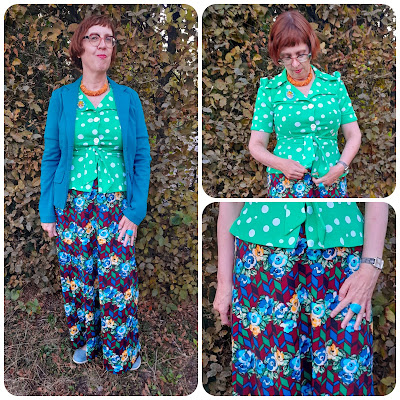 We hadn't made any special plans for my birthday itself,  just spending the day here, in one of our special places, was more than enough for me. That, and the 25°C gifted by the weather gods!
Wanting to make the most of the brief return of Summer, we selected one of the other walks I'd picked up at the tourist office earlier that week. The 6.6 kilometer long Brabanthoek walk had its start in the village of Oostvleteren, about 12 kilometers from the cottage, and was once again signposted by those trademark hexagonal signs. 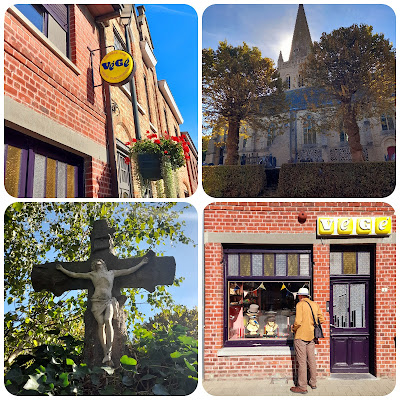 We parked near the church, and soon found the first of the signs, which would lead us out of the village and into the open countryside. But not before having a mooch around the churchyard and being transfixed by the nostalgic old grocery shop, sadly no longer trading but kept in its original condition by its current owners. 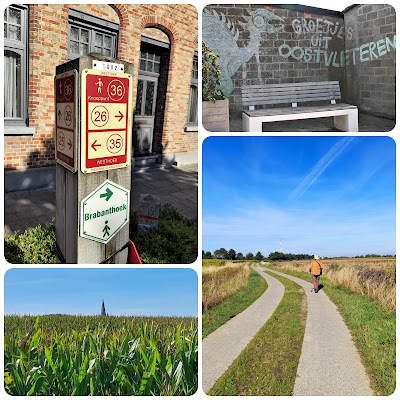 We soon left the village behind to walk among fields and meadows in a landscape which was once again flat as a pancake as far as the eye could see, with just the odd copse of trees to provide some shelter from the elements.
Again, the picnic fairies provided us with a shady bench just when we were starting to feel peckish. 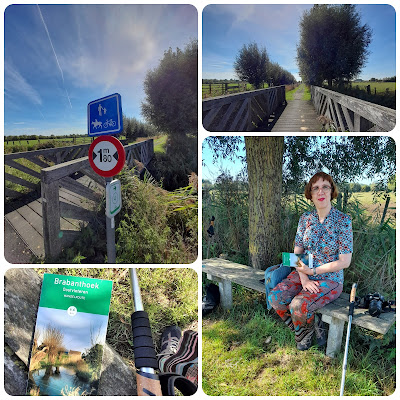 From here, the walk continued along a charming brook, the Boezingegracht, until we reached the Brabanthoek nature reserve the walk was named after. This is one of the ecologically most valuable parts of the IJzer wetlands, with fields and meadows bordered by ditches and natural floodplains.
The intriguing structure on the top right is the remnant of an old windmill that was once used to pump up water from the nearby pool in order to reduce groundwater level. 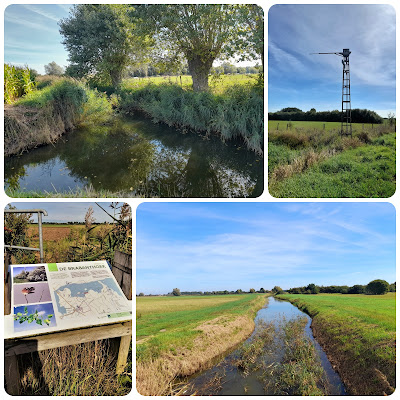 We must have been about halfway, with the church tower already beckoning us in the distance, when we decided to break off our walk, and do the other half next year. Preferably on a slightly cooler day.
Before we returned to the village and our by now heat trap of a car, we passed one of the area's abundant little chapels - this one apparently used as a courier drop-off point - and De Zonnegloed, which is a sanctuary for wild animals. 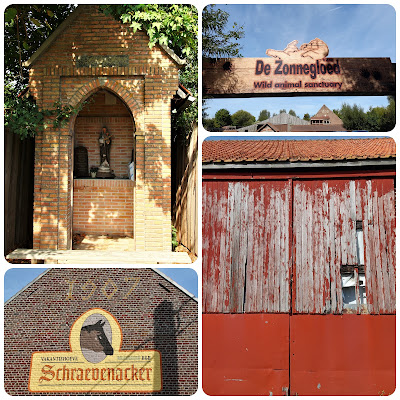 After a little siesta at the cottage, we got back into our car for what to all purposes and intents was meant to be a short stroll through some local woods. 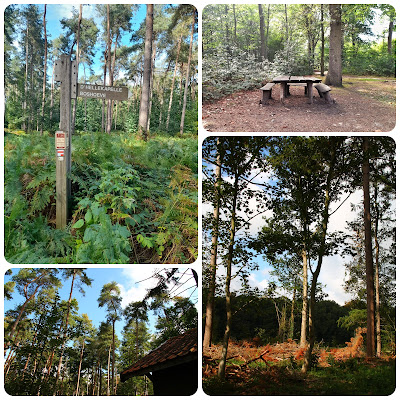 Again, we made use of one of the numbered maps, but as this apparently made us do quite a detour, we thought we'd be clever and do a shortcut. We should have known better, as obviously we got lost, and had to retrace our steps, so that the short stroll had soon turned into a rather longer one.
We must have passed the half-timbered cottage in its surrounding meadow several times and at one point I was tempted to throw down the offending map in despair, since it was of no help at all. 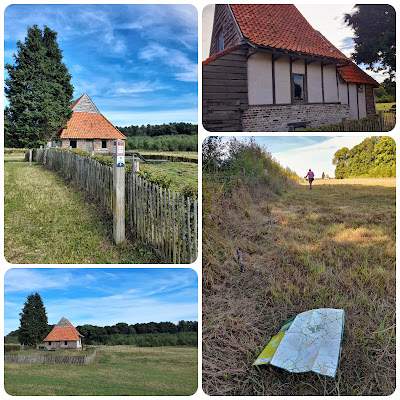 But surely getting lost is the stuff of adventures and thus much more fun. Particularly in hindsight!
Common sense and what was left of our sense of direction prevailed in the end, so that we safely made it back to where we'd started. 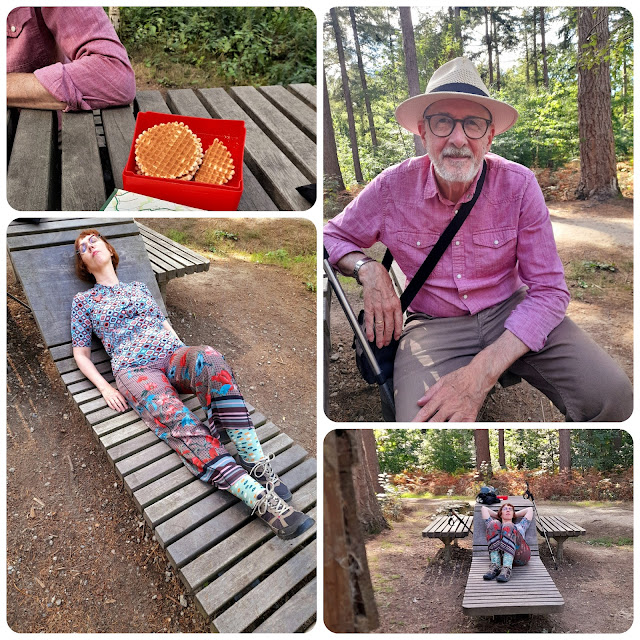 Surely you'll agree this earned us some waffles and a nap on the conveniently placed sun lounger at the edge of the woods!
Birthday girl was wearing her charity shopped Zara trousers again, combined with a pussy-bow top I've had for absolutely ages. And spotty socks!
So, that's it then. It'll be business as usual, starting with a September catch-up, from my next post onwards. I hope to see you again soon!
Posted by Polyester Princess at 19:26