Back to Shropshire - and back again!

Oh my, that went fast, didn't it! One minute we were packing our bags at a searing and brain-melting 35°C, and the next we're back home, spending the final two days of my leave in a whirlwind of unpacking, doing several loads of washing, catching up with blogland and making a start with writing this post. After all, being due back at the office on Tuesday, there was no time to lose!

Oh, and of course, whole chunks of those two days went to extensive cuddling sessions with Bess, who has hardly let us out of her sight since we walked through the front door on Saturday night. 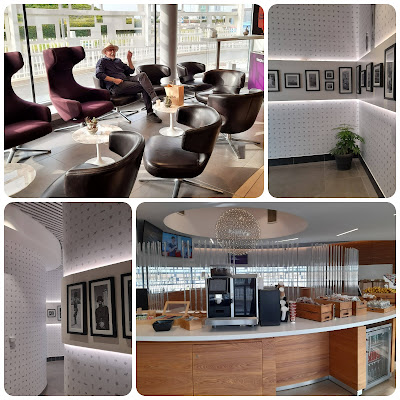 Now, let's backtrack to the early morning of the 18th of June, when we set off just before 6 am - with the mercury still nudging the mid-twenties - to arrive at the Channel Tunnel terminal in Calais around two hours later.
We had decided to splurge on the more expensive Flexiplus option, which gave us the freedom to turn up and board whenever we wanted, with guaranteed fast track check-in. Not to mention having the use of exclusive lounge facilities, rather than having to share the big terminal with what we half-jokingly called the plebs. So, having successfully passed border control - using our travel passports for the very first time - we enjoyed complimentary cups of coffee in an almost empty lounge, and filled a bag with fruit juice, pastries and other delicacies to be savoured during our journey. 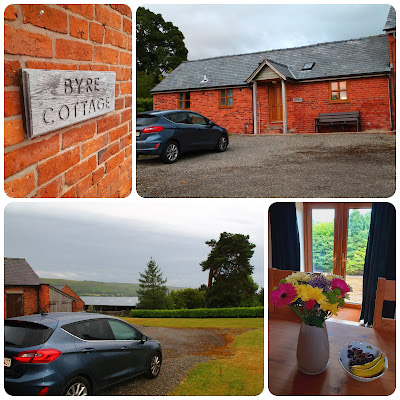 Our train left at 8.50 on the dot, and arrived in Folkestone around 8.25. And no, that isn't a typing error. The train only takes 35 minutes to cross, and as we obviously have to set back our clocks one hour, our arrival was 25 minutes earlier than our departure. Surely, that's the closest thing to travelling back in time!
While we were travelling to Shropshire the temperature gradually dropped below 20°C and soon the first of the forecasted rain was tickling our windscreen. By the time we crunched our way down the lane leading into our valley below the Long Mynd, the thermometer indicated a measly 10°C.
Our cottage was actually freezing cold, so that we had to put the heating on. Something we couldn't even have imagined doing less than 24 hours earlier. 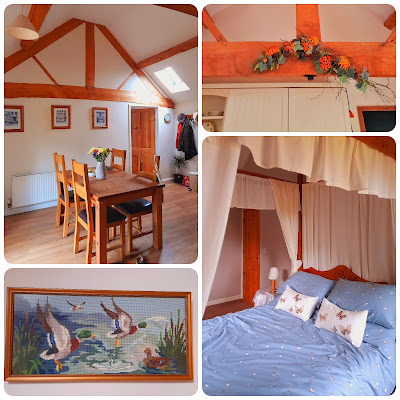 The cottage - called The Byre, as it's a converted former cow shed - was as charming as ever and, apart from a couple of minor details, nothing much had changed since we waved it goodbye in early July 2019. Little did we know back then that it would be three years before we'd be back!
If in the weeks before our holiday I fully expected to choke up at finally being in our beloved England again, strangely enough it didn't happen. In fact, it felt utterly normal to be back and, as I walked into the cottage with its ever-changing views towards the majestic Long Mynd, it was as if we'd only left yesterday. 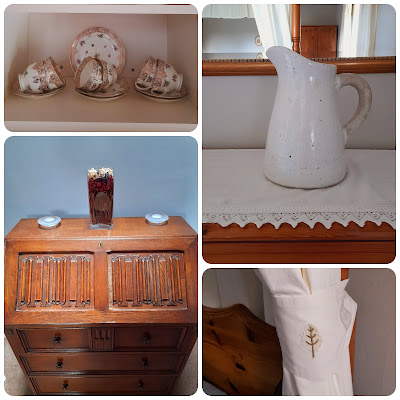 With the rain lashing against the windows, we made ourselves at home, eating the ready meals we'd bought in the tiny Waitrose at Warwick services, then plonking ourselves down on the sofa, reading and listening to music until we dropped off. Then it was time to climb between the sheets of our bedroom's four poster!
We slept like the proverbial logs but woke up early as we were too excited and raring to start our holiday adventures. Drawing back the curtains revealed the Long Mynd bathing in some hesitant early morning sunshine. 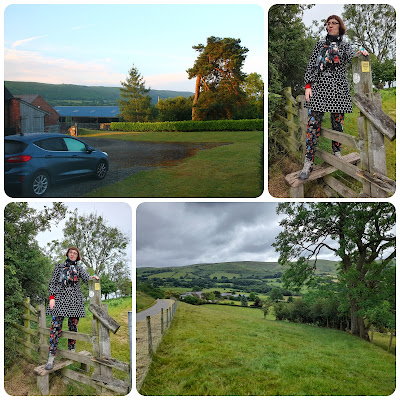 We hadn't made any definite plans for the day, but needed to do some food shopping to tide us over for a couple of days so, after bacon and eggs for breakfast, we drove to  Bishops Castle, a delightful 15-minute drive along a succession of country lanes.
En route, we stopped at the top of our lane, looking back towards the valley with its huddle of farm buildings, our cow shed being one of them. In order to offer you a peek of what I was wearing, I even climbed the rickety stile giving access to Adstone hill.  As the temperature wasn't expected to climb much higher than 16°C, I wore a pair of floral slacks, a retail buy from H&M several years ago, and a black and white dotted Phase Eight raincoat picked up in a charity shop in nearby Church Stretton in June 2018. 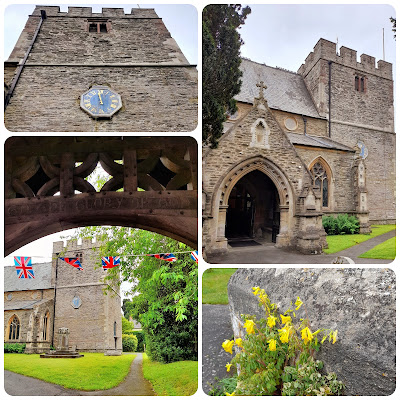 Bishop's Castle is a small but perfectly formed ancient market town nestling amid the South Shropshire Hills, only a handful of miles from the Welsh Border.
After having parked our car, we emerged onto the town's high street and walked into the direction of St. John's Church, which is situated literally at its lower end.
The church was built towards the end of the 13th century, but only the tower remains of the original church, which was completely re-built in 1869-70. The tower has an unusual one-handed clock, apparently a leftover from the days before we needed to know the time down to the minute. Is it a wonder that time seems to go slower here? 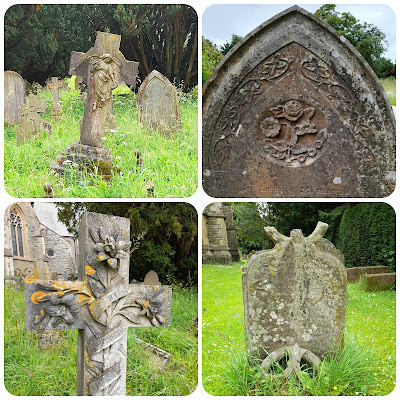 The atmospheric churchyard, with its lichen encrusted, time-worn and tumbledown gravestones, strikes the right balance between maintained and semi-wilderness and is an absolute joy to stroll through.
It is part of Caring For God's Acre, which supports groups and individuals to care for and enjoy churchyards and burial grounds, aiming to protect and rejuvenate these beautiful havens of heritage and wildlife.
It was here that the tears finally came. Tears of happiness to be back where I feel I belong. My adopted country which often feels more like home than my actual home country. It was a good thing I was in a churchyard rather than anywhere else where people would give me the side-eye for crying in public. 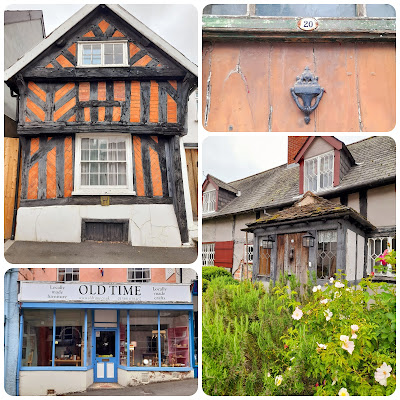 After our ramble around the churchyard, we proceeded uphill: the gradient of the town's High Street is 1 in 6, a stiff climbed for our rusty limbs. At its upper end is the House on Crutches Museum (below, top right) which is situated in a quirky timber framed building dating back to Elizabethan times.
The town is at a junction of several old drover’s routes which led travellers, farmers and stock to the markets. In recent years, they have brought in artists, authors, musicians and free thinkers of every hue. As a result the town is famous for its welcome to visitors, its pubs, microbreweries, independent shops, and - last but not least - its slightly eccentric demeanour. Which meant that for once we didn't stick out like the proverbial sore thumbs :-) 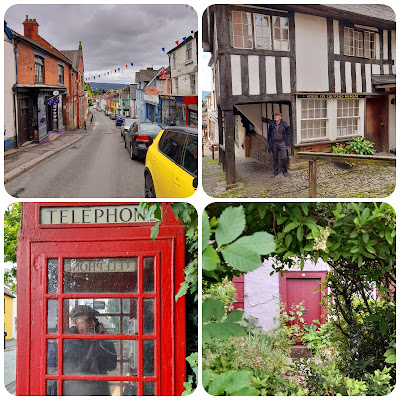 Having climbed all the way up, we were gasping for a cup of coffee, so we ducked into one of the few establishments which were open on a Sunday. Yarborough House, its façade painted a cheerful orange, combines a tiny tea shop with a large second hand book and record shop.
Then we stocked up on provisions in the tiny local Co-op and whizzed back up those country lanes to enjoy a leisurely lunch at the cottage. 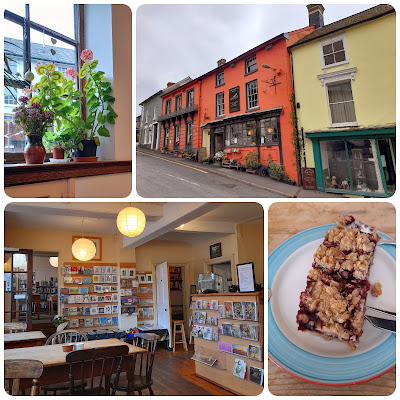 The dark, rain-pregnant clouds which had been scudding across the sky all morning had decided to take their liquid load elsewhere and here and there a gap appeared through which a whisper of blue could be glimpsed. By then it had even warmed up a degree or two.
Consulting the map, we decided to pay the English Heritage managed Acton Burnell Castle a visit. The graceful red sandstone shell of the castle, which was built between 1284 and 1293 by Bishop Burnell, Edward I's Lord Chancellor, is tucked away in a quiet part of Shropshire, about half an hour's drive from the cow shed.
By 1420, the castle was abandoned, and it was allowed to decay while a new classical style mansion,  Acton Burnell Hall - now a private school - was built beside it in 1814.
Nonetheless, the castle remains an impressive example of a medieval fortified manor house. 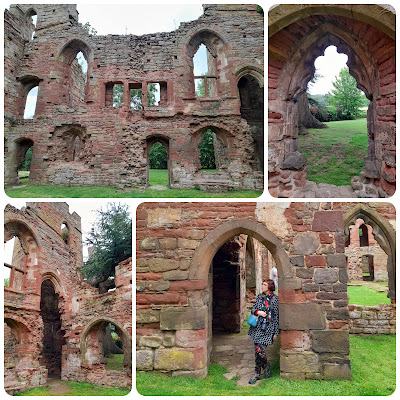 When we arrived, a family was having a picnic inside the ruin, with both children and adults playing a boisterous game involving water guns. Not that you'd notice in the photos, as shooting around people and making it seem that we are the only visitors, is one of my fortes. This involves having lots of patience and a deadly stare! 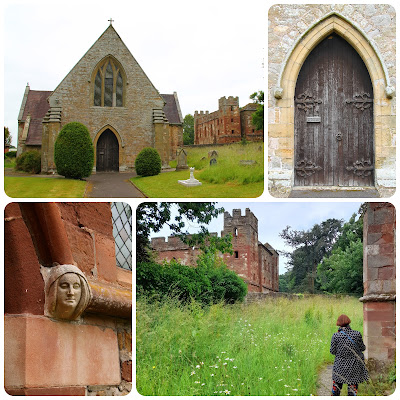 Leaving the castle grounds behind, we walked towards St. Mary's Church, the churchyard offering a fine view of the adjacent castle. Like the castle, we owe its existence to the aforementioned Bishop Burnell.
Unusually it remained unaltered from its completion in about 1282 until the addition of a new tower in the 1880s. 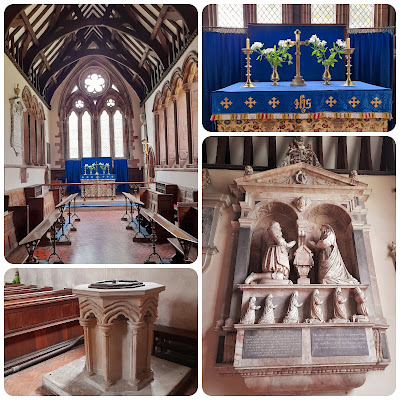 The church's north transept has several fascinating and intricately carved alabaster effigies.
On the west wall is the memorial to Sir Humphrey Lee, who died in 1632 (above, bottom right). Sir Humphrey is shown at prayer facing his wife.  Their children too are shown kneeling, each of them being a miniature version of a parent. 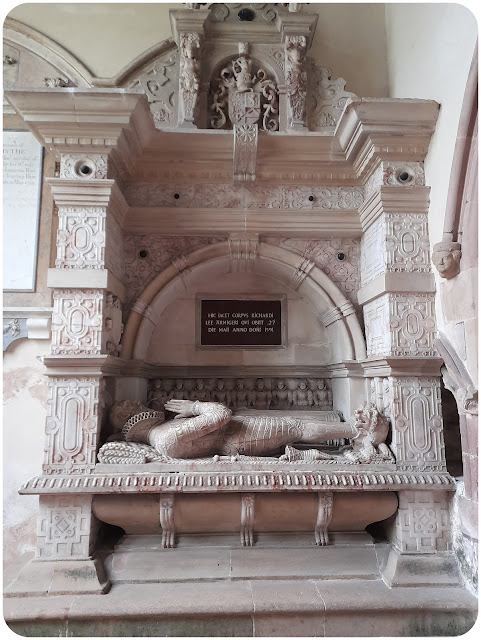 On the right is the impressive monument to Sir Richard Lee, who died in 1591.  He is portrayed as a knight with his wife beside him, 3 sons at his head and feet, the eldest with his hand on the helmet, and his 9 daughters behind him. Interestingly, no two of the girls are identical! 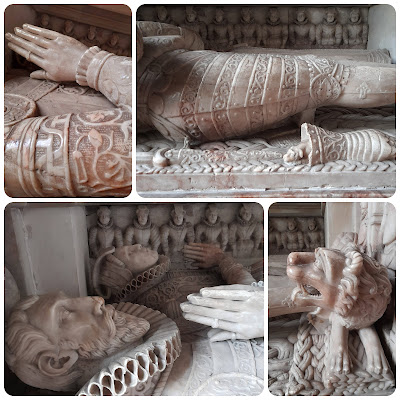 After leaving the church, we made our way to the enchanting little chapel at Langley, just 5 minutes up the road from Acton Burnell, and also owned by English Heritage.
The Burnells were lords of the manor of Langley and, in 1313, Richard Burnell obtained permission to build a chapel here.  The structure of the present building dates from this time. In 1377, the manor of Langley passed to the Lee family (they of the alabaster memorials), who fitted out the chapel in about 1546. In 1591, Sir Humphrey Lee moved to Langley. He was probably responsible for re-roofing the chapel in 1601 – a date given on the nave roof – and refurnishing it a few years later. 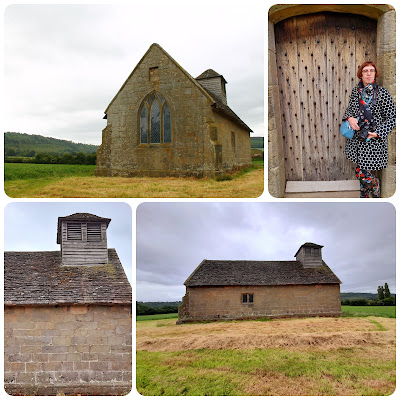 The atmospheric interior of the chapel, which is standing rather bleakly in remote countryside, contains a perfect set of 17th century timber furnishings.
Typical Tudor decorations of roses and fleurs-de-lis appear on the plaster frieze between the roof and south wall (below, bottom left). 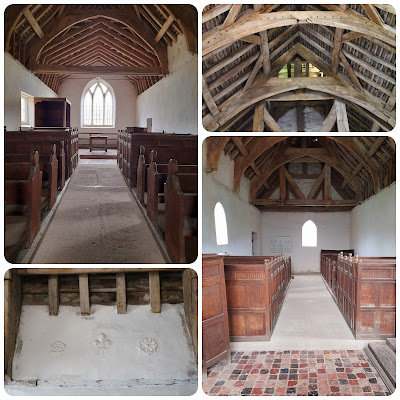 By 1700 the chapel had largely fallen out of use, and thus escaped any attempt to re-order the interior according to the more elaborate ‘High Church’ model favoured in the 19th century. The last regular service was held here in 1871.
Having concluded our visit, we returned to our car parked in a lay-by, and attempted to drive back to The Byre. I won't mention the close encounter with a bus on a single track lane, which required us to reverse and half-burrow our car into a hedge, or the fact that our Satnav was trying to get us to take the infamous Burway, a steep and precipitous road crossing the Long Mynd. Having made that mistake once (see here) we weren't about to repeat the experience!
Posted by Polyester Princess at 18:52