Having arrived at the Spring Equinox, we can safely assume that Spring - however impossible - has finally sprung!

What's more, we certainly have no reason to complain about the weather lately! Although most days still have a frosty start to them, the sun has been working overtime to crank up the thermostat to double digits by lunchtime. Rain, on the other hand, has been virtually non-existent, which is a blessing after all the precipitation we had to contend with in the past couple of months!

As usual, my blog hasn't caught up with the times, so that once again this post involves a tiny hop and a skip down memory lane. This brings us to Saturday the 5th of March, which insisted on a repeat of Friday's sunshine and balmy 12°C. 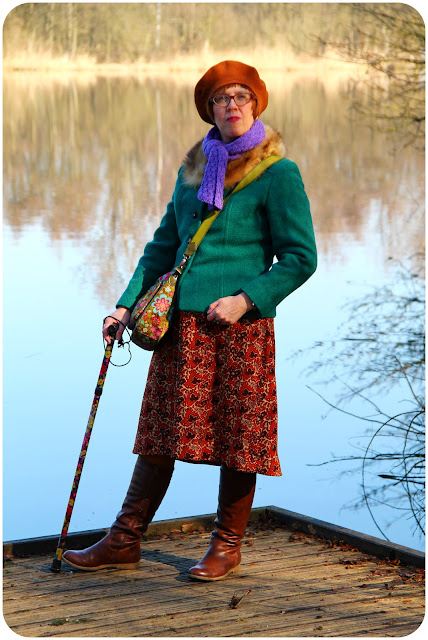 We were raring to go outside and have our faces kissed by the sun once more, and what better way to do so than by going for a walk among nature's soul soothing splendour?
Creatures of habit that we are, we once again set off into the direction of Blaasveldbroek, home of the marsh spirits.
I was giving Friday's green vintage jacket with its furry collar a repeat outing. In fact, it has been a joy to wear shorter jackets instead of my long Winter coats. As much as I love the latter, I'm starting to get a bit bored of them by now. My weekend bag, walking boots and floral walking stick are all the same as before, but I did wear a different beret and scarf. We'll have a look at the rest of my outfit in a bit. 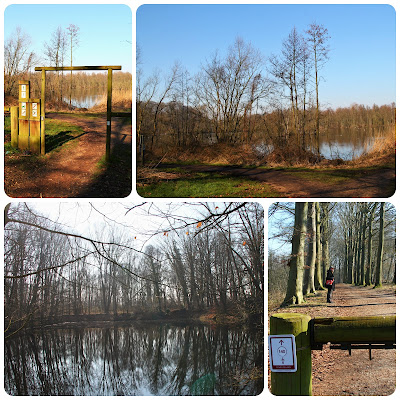 The sun was shining brightly and it had started warming up considerably by the time we arrived at our destination after a twenty-minute drive. Instead of parking at the main car park, though, we opted for a small car park reached by way of a narrow country lane, the final part bumpy and unsurfaced and ending in a clearing in the woods. As a rule, not many cars are parked here, which makes it feel like a well kept secret.
The wooden gate posts give access to the domain itself. Immediately beyond it lies the first of the reserve's many ponds (top right), the water level of which was higher than we'd ever seen it before.
Instead of walking through the gate, we turned immediately right to walk along a broad tree-lined path (bottom right), with a smaller, dark and mysterious pond to our right. 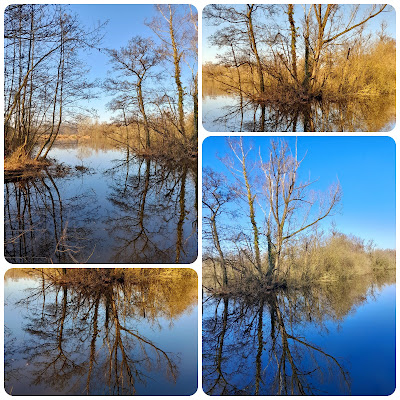 To the left, a vista of watery reflections opened up, the expanse of blue sky meeting its twin in the looking glass lake. In the Summer months and well into Autumn only glimpses of the lake with its islets and peninsulas are on offer, and it's only in Winter and early Spring that its captivating beauty is fully revealed. 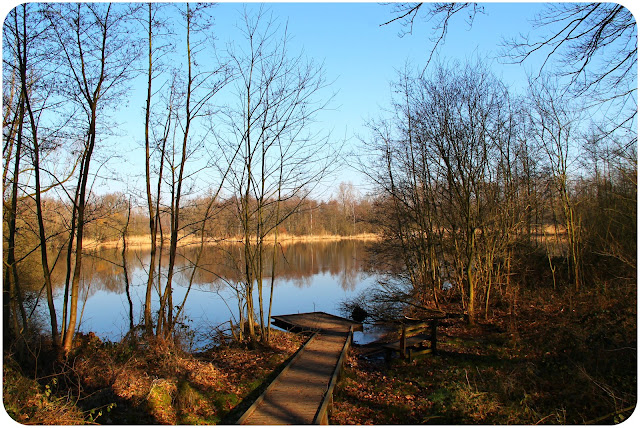 From the path, a wooden boardwalk leads down to a small platform jutting out into the lake, on which I'm standing in the opening photo of this post. More than once, we've either picnicked or just sat and stared on the bench to the right of the boardwalk just before the platform is reached, but it would have been impossible to do so now without getting our feet thoroughly wet. 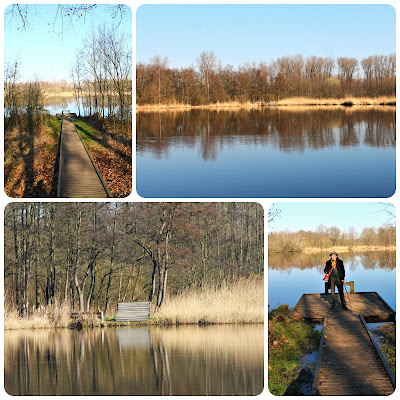 There's a second boardwalk a little further on, leading down to a larger platform ending in a railing erected for fishermen to rest their rods on. It's usually occupied, but much to our surprise there wasn't a soul in sight, which must have been a first.
We were admiring the view of the placid lake with its reed bordered edges, when I suddenly spotted the giant sun lounger we sunbathed on during one of our previous visits. It's hidden about half-way among the reeds in the photo on the top right, but I've zoomed in on it in the one on the bottom left. 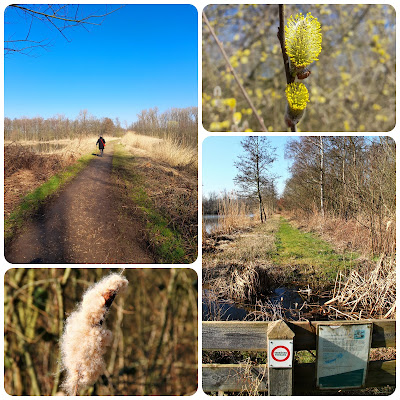 Soon afterwards, we turned right at a T-junction and skirted the lake until the sun lounger was reached.
Immediately behind it is a closed off path, which used to be our favourite. Nowadays, it's the habitat of a beaver family, which is the reason it has been out of bounds for us humans since early 2019. 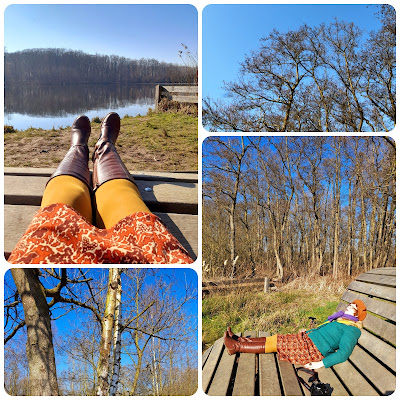 We spent 15 minutes or so reclining on the lounger, soaking up sunshine and replenishing our Vitamin D levels. The perfect opportunity to offer you a view of my curry-coloured opaques and the hem of my dress.
/ 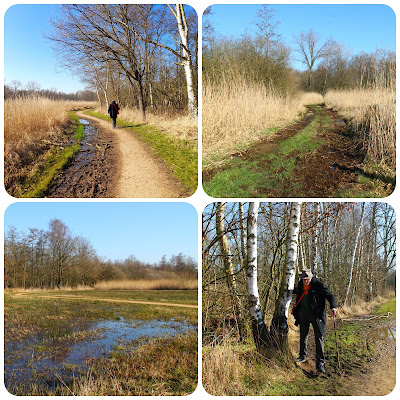 Arriving at another junction, we veered off to the left again. However lovely, the path to the right would eventually end at a stretch of water used for water sports, which would mean a boring walk along its tarmacked edge before another entry point into the reserve is reached.
To the left it was then, negotiating some muddy stretches, with seriously waterlogged meadows to our left. I think I may have mentioned before that huge chunks of this area are barely above sea level! 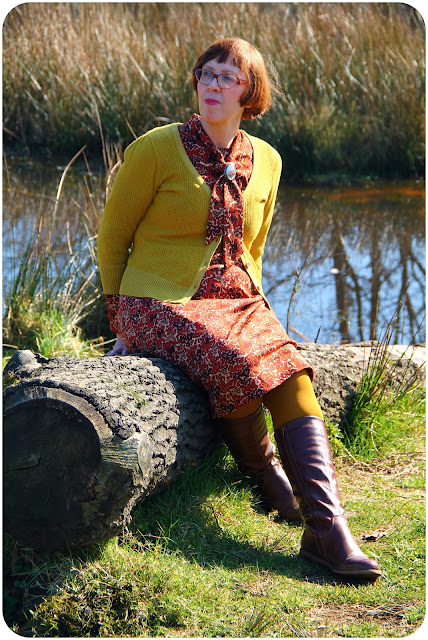 Eventually we reached the reserve's visitor centre, which has a choice of picnic benches as well as an adventurous play area for children. Much to our delight, there weren't too many people about, so that we had the pick of the benches for once.
But first, let me sit down on a log and show you what I was wearing. This brown, rust and cream vintage dress had been waiting in the wings for a while. Apparently, I last wore it in November 2020, funnily enough combined with the same tights, and with the same brooch pinned to its tie collar. 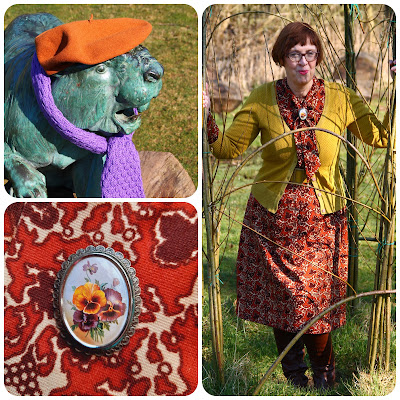 At least I wore a different cardigan and belt, both in a contrasting shade of chartreuse, this time! 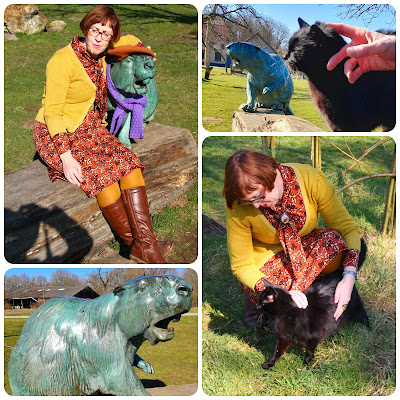 We sat ourselves down on our favourite bench made from the trunk of a fallen tree and guarded by a pair of bronze beavers. One of them was so kind to keep hold of my scarf and beret while we were taking photos.
Our sandwiches, meanwhile, attracted the attention of the resident cat who is always lurking around the picnic area looking for people to pester for tidbits. We used to call her a slimmer version of Phoebe, but now she seems quite big compared to petite, small-boned Bess. 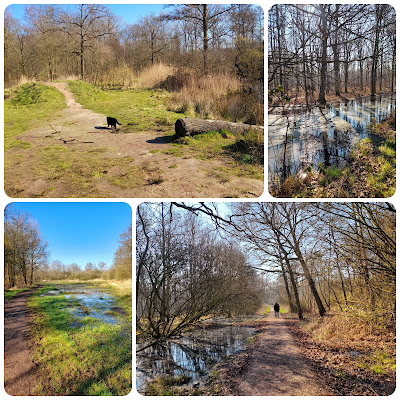 After bidding Big Black Cat farewell, we continued our walk alongside swollen brooks and more water meadows.
Our final stretch took us to yet another of the area's lakes, which seems to be a favourite with the reserve's wildlife. There is plenty of waterfowl here, with the honking of geese and the clucking of moorhens providing the soundtrack. A cormorant sat drying its wings after its tasty lunch of fish. 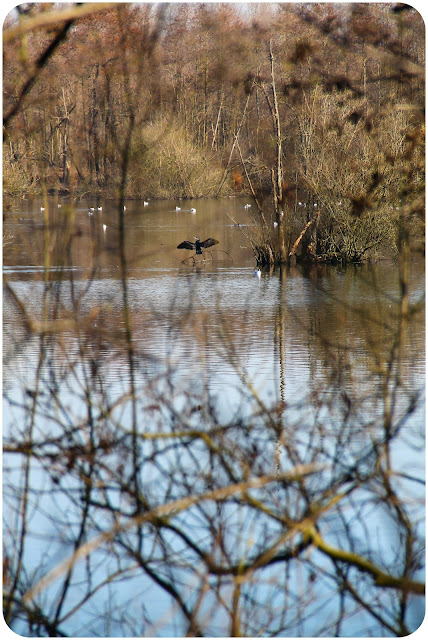 Although the sun still graced us with her presence on Sunday, the temperature had taken a dive to just 8°C. After a morning of chores, it was time to get out my gardening gear for another clearing session, this time tackling the seriously overgrown long border to the right of the garden path and the equally chaotic border in front of the bench.
It was a delight to discover we've got daffs and crocuses. Meanwhile, the lilac pansies and the yellow and pink primulas we bought at the garden the other week are doing their best to cheer up the area under the awning just outside the kitchen door. Just need to get into the watering habit again! 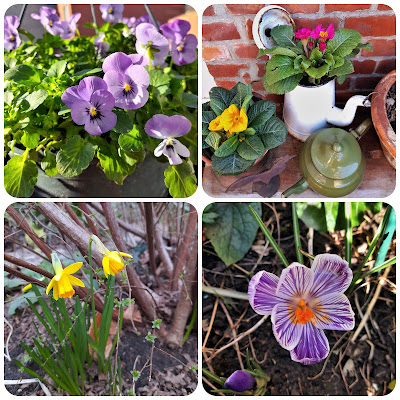 Afterwards, I changed into my real clothes again!
The striped vintage dress I was wearing was bought in the Think Twice sales during a trip to Bruges in April 2019.  Accessorizing it was easy: I just added oodles of pink! Although there isn't any pink in its stripy pattern, there's a splash of lilac, similar in shade to that of the pansies. For some reason, the camera refused to capture it! 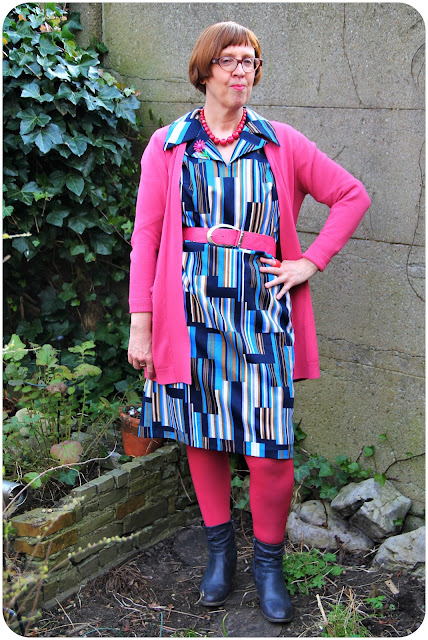 I cinched my waist with a textured pink belt, a recent charity shop find I forgot to show you.
Pink opaques, a raspberry beaded necklace and a pink metal flower brooch completed my outfit. My pink longline cardigan has seen better days, so it isn't usually worn outside the house. Nevertheless, its shade of pink was just spot on. 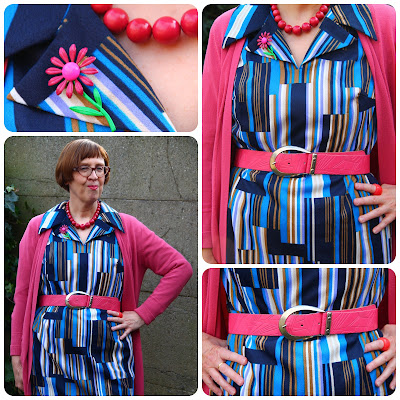 I'll be back with more outfits, charity shop finds and garden updates in my next post. I hope you'll join me again then.
Have a great start to the week!

Posted by Polyester Princess at 18:49