What a difference a day makes

We've been bracing ourselves for storm Eunice as I write, and I'm keeping my fingers crossed that those of you who are affected by the storm have escaped the worst.

Now, before we take a trip back in time to the first weekend of February, which will be the subject of this post, let's have a quick look at the past week, which I've been itching to tell you about.

Never mind those gale force winds or the obligatory showers which delighted in plaguing me during a couple of my commutes, there was sunshine on the menu too.

But sunshine wasn't the only thing to put a spring in my step! First of all, on Monday I took the afternoon off  for a blogger meet up with Kezzie and her husband, known on her blog as CBC, who were visiting Antwerp this week. It was an absolute joy to meet them and Kezzie and I chatted as if we'd known each other forever. We might even have done a spot of vintage shopping!

Then there was a second, impromptu, meet up on Thursday, before we said our goodbyes. I'm so glad they loved the city I used to live in for nearly 15 years, and to which I have been commuting to for a further 27. 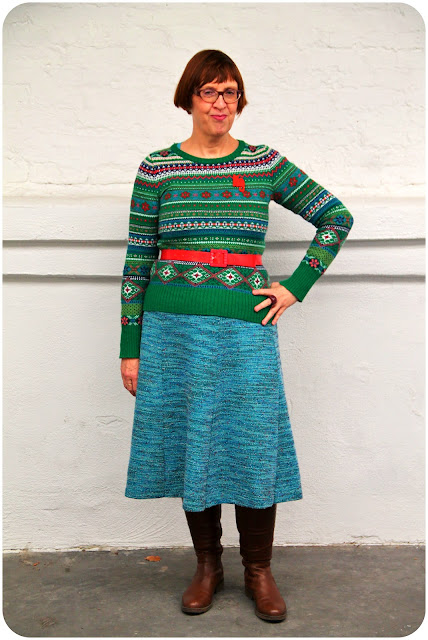 Back to the order of the day now!
After a dismal Friday, Saturday the 5th of February looked set to be the best day of that weekend.
There had been some light frost overnight, but the blue sky and sunshine which greeted us that morning were definitely issuing an invitation to go for a walk. Highs of 8°C had been predicted which, although not bad at all for the time of year, still prompted me to wear my newly charity shopped H&M jumper. 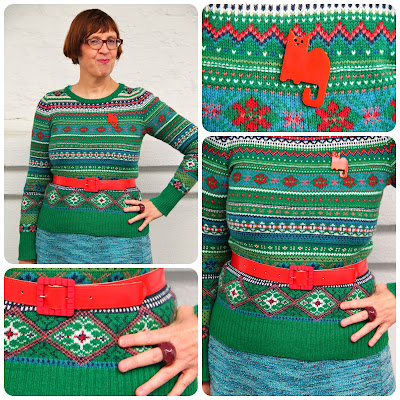 With such a joyful colour palette to play with, I took my lead from the turquoise in its pattern to wear one of my favourite skirts, its slubby turquoise fabric threaded with multi-coloured specks.
Paying tribute to the pops of red, I added a red vinyl belt with a square buckle to define my waist. The jumper didn't look right tucked in, so I wore it out, but in spite of its exuberant colour and pattern, I felt it looked too bland and unfinished without the belt. More red was added by the plastic cat brooch I pinned to the jumper. 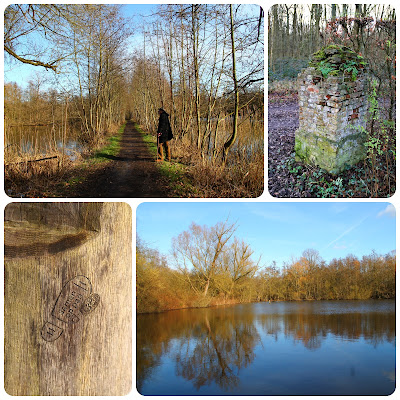 The morning's chores finished, it was time for some fun, so after lunch we drove off to one of our best-loved nature reserves for a head-clearing walk.
I've more than once blogged about Blaasveldbroek, which is one of our regular, all-seasons haunts, but I was surprised to find that our last visit dated from early October, when Autumn wasn't even in full swing.
For the sake of variety, we started our walk from the main car park this time, which soon took us past a whitewashed chapel, its blue and white striped door open day and night for people in need of praying or burning a candle. 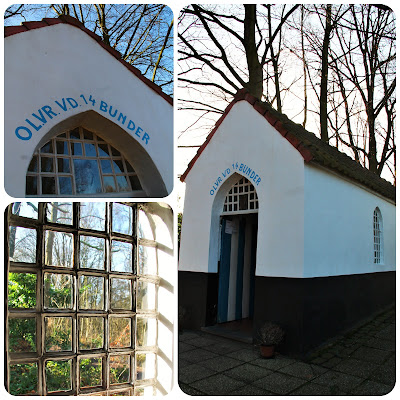 The chapel is dedicated to Onze-Lieve-Vrouw van de 14 Bunders, or Our Lady of the 14 bunders, a bunder (Latin: bonnarium; French: bonnier) being an old unit of land measurement, which was slightly larger than a hectare.
Legend has it that in the harsh winter of 1760, a statue of the Virgin Mary was found here during peat cutting. As the part of the pond where it was found miraculously did not freeze over in winter, it soon became a place of pilgrimage. The small chapel that stood here burned down in 1858, and the present one was built two years later. 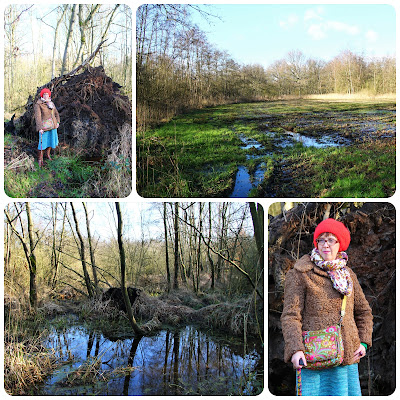 The broek part of Blaasveldbroek means a marshy area, and indeed there is water galore here, and not just in the reserve's many ponds and lakes. The incessant rainfall of the last couple of months had caused quite a bit of flooding, particularly since the majority of this watery wonderland is barely above sea level.
In ancient times, this was an impenetrable area, where fairies and marsh spirits were rumoured to live, and I wouldn't be at all surprised if some of their descendants still roam here.
For the obligatory photo of my outerwear, I'm posing in front of the root system of a gentle giant slain by a past Winter storm. It has been there so long it has become a landmark. 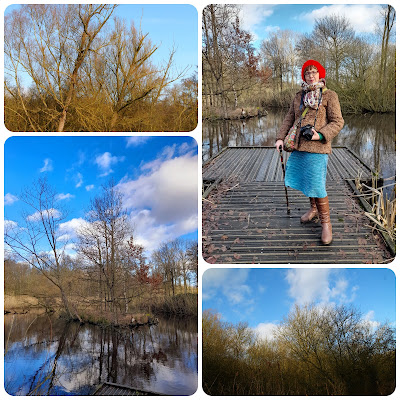 I'm wearing a butterscotch Astrakhan jacket charity shopped in December 2020, combined with the floral eternity scarf I found the other week. The red knitted hat, which is contrasting deliciously with the colour of my skirt, was a charity shop find as well.
The area, which used to be regularly flooded by the nearby River Rupel, was dammed in between 1100 and 1300. Afterwards, it was used intensively for the exploitation of peat, traces of which you can still see today in the reserve's scattered ponds. 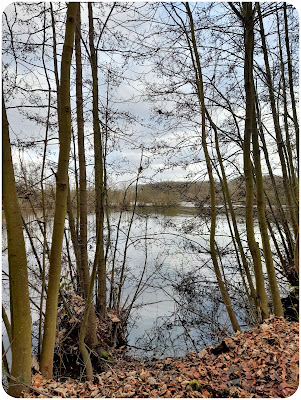 As we walked, the sky darkened with clouds racing by and holding the promise of rain.
Without the warmth of the sun, it suddenly felt several degrees colder, the false Spring day reverting to just another grey Winter one.
We quickened our step, enticed by the cakes we'd left in the boot of our car. 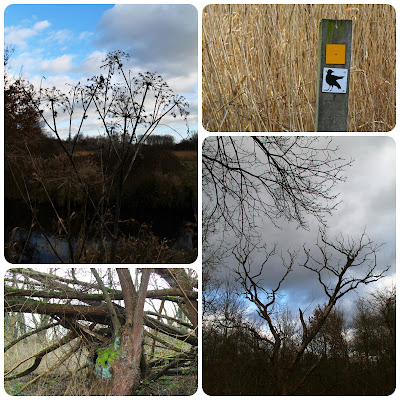 The sun briefly reappeared, illuminating the cloud reflections in the largest of the lakes, before taking a final bow.

She was definitely conspicuous in her absence on Sunday the 6th of February.
Torrential rain and lots of wind was our lot throughout the day, and we were even treated to a veritable fire and brimstone thunderstorm in the evening.
We were obliged to take outfit photos inside, all of them too dark to make use of without the aid of some serious editing. 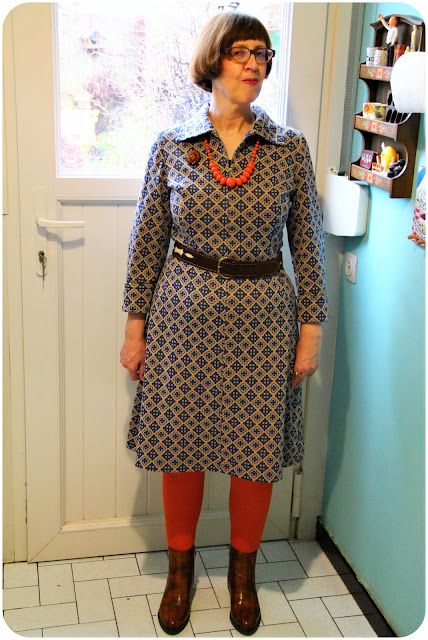 To cheer myself up, I was wearing another favourite dress - well, all our clothes should be favourites shoudn't they?
It's always a joy to wear this blue on off-white tile-patterned textured polyester one on a Winter's day! 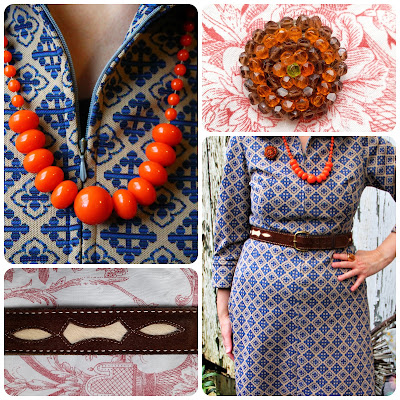 Although I usually wear it with yellow, I thought I'd try it with orange this time. They do say variety is the spice of life!
My bright orange opaques were joined by an orange beaded necklace, while the beaded brooch I pinned to the dress has some orange in it as well. It was a recent charity shop find already featured in my previous post, as was the belt which I omitted to show you at the time. 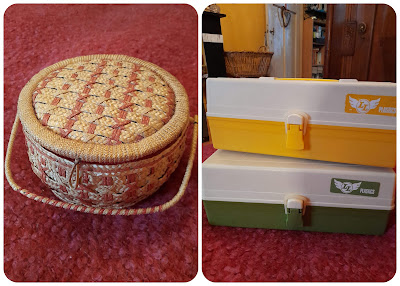 We'd slept late for us, as it was just gone 9 am before we were able to drag ourselves out of bed.
After breakfast, I tackled a couple of boring but necessary sewing jobs, and then took the opportunity to tidy my sewing basket, which had so much stuff crammed into it that it refused to close. The two plastic sewing cases are full of sewing paraphernalia inherited from my Mum and paternal grandmother. It'll be a long time before I need to buy any sewing thread, as I've got some in every colour under the sun.
The green bottomed box, by the way, used to belong to my Mum too, while I bought the yellow bottomed one in a vintage shop long before I inherited the other one, as it reminded me of my Mum's. 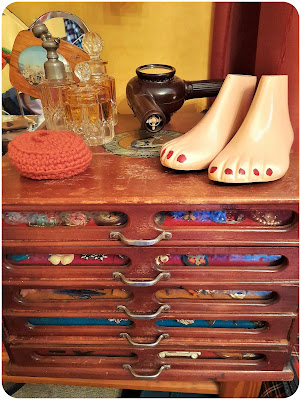 As it was still chucking it down outside, I decided to rearrange my brooches, as the antique chest of wooden, glass-fronted drawers which is their home had become a bit of a mess.
As Claire recently asked me where I am keeping all my brooches, this is especially for her. The chest is the kind which was used to display sewing threads in haberdashery shops, and it was a flea market find in December 2018. I lined the drawers with brightly coloured felt sheets. 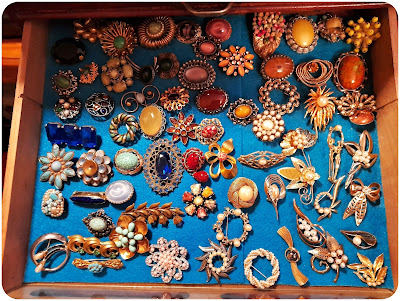 After all this exertion, I decided to call it a day and join Bess on the sofa. 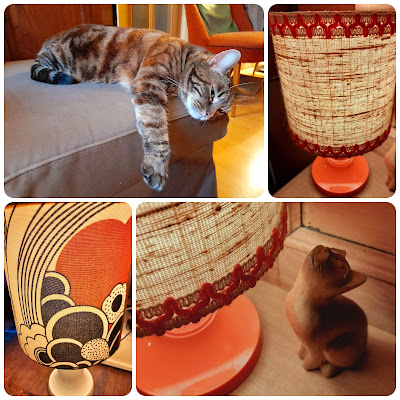 But not before showing you some of our collection of lighting fixtures. I think it goes without saying that all of these were second-hand finds as well. We certainly needed some artificial daylight that day. 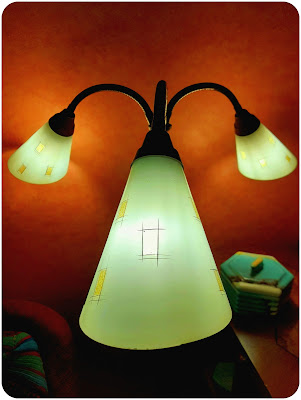 And now, if you'll excuse me, I'm going to plug my ears and block out the racket Eunice continues to make outside. I'll be glad to be rid of her!
Posted by Polyester Princess at 19:16