Send me the pillow that you dream on

If in the past I've often been gobsmacked by the pace at which time was speeding by, lately it seems to have accelerated dramatically, the days whizzing by faster than the speed of light. There's hardly time to catch one's breath, let alone to stand and stare for too long.

Weekends in particular do seem to come and go in the blink of an eye. And then I'm lucky that mine have a glorious three days instead of just the customary two!

Nevertheless, as you're probably used to by now, my blog isn't quick enough of the mark to catch up with real life. So, while we're approaching February's half-way point, I've still got to tell you about January's final Sunday! 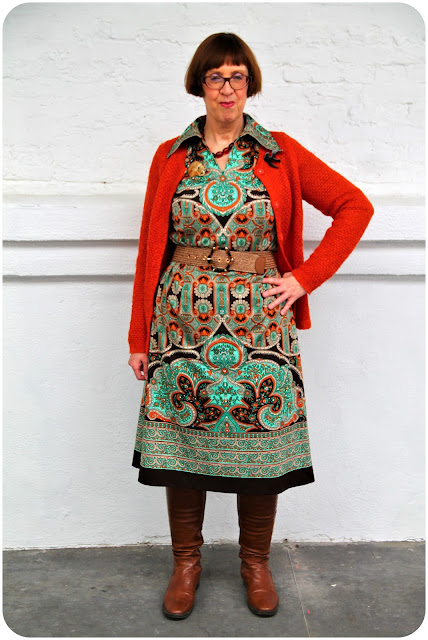 By then, we'd already enjoyed two days of sunny spells and no sign of showers, so it was nothing short of a miracle when Miss Sunshine was once again knocking on our windows on Sunday morning. Never mind the fact that she managed to highlight Dove Cottage's collection of dust bunnies, there was no way we were going to spend the day inside getting rid of them!
The dress I'd earmarked for the day is vintage and an old Think Twice find, its earliest reference in the blog dating from December 2017. With its groovilicious green, brown and orange pattern, it is definitely not one for the faint-hearted, but whenever there's colour and pattern, I'm game. 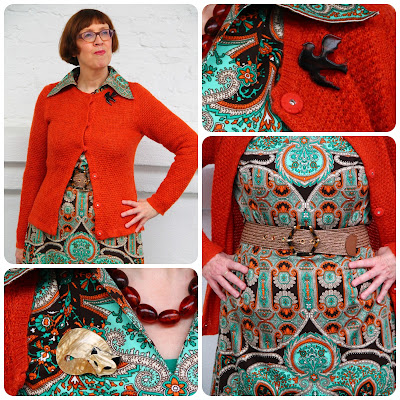 To accessorize it, I pinned my faux-Lea Stein cat brooch to the dress, added one of my stretchy belts and wore a semi-transluscent brown beaded necklace.
At just 8°C, some layering was required, so I wore a chunky orange cardigan from posh Belgian label Pauline B. on top. It goes without saying that it was a charity shop find. There is no way I'd have paid its original +€ 100 price tag! A second brooch, a vintage bird matching my necklace, was pinned to the cardigan. 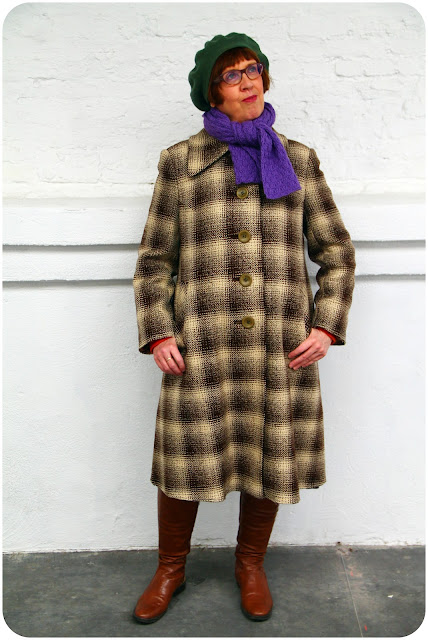 I was reminded of this vintage swing coat when posting an old photo on Instagram where I'm doing a series called Flashback Friday, so I dragged it from my full-to-bursting coats cupboard to give it a long overdue outing. As both of its pockets had long ago sprung a leak - which I'd conveniently forgotten about - anything I shoved into them promptly disappeared inside the coat's lining. Two weeks on, and I still haven't done anything about it, although it's a relatively easy fix ...
My sage green beret, recently charity shopped purple scarf and my beloved mock croc boots completed the day's outerwear. The latter were of course exchanged for our walk! 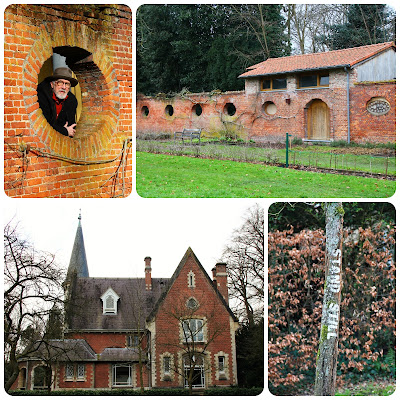 The sun did one or two disappearing acts while we were having lunch, so we decided to stay close to home just in case the weather gods would change their minds. We needn't have feared, even if the clouds seemed to be ahead of the game by the time we'd parked our car near Park Den Brandt on the outskirts of Antwerp. It looked as if lots of people had had the same idea, as the car park was full and we were obliged to park in a quiet residential street near the park.
As usual we entered by way of the picking garden, at this time of year all but empty of produce apart from a few straggling herbs. As I was lagging behind taking photographs, I thought Jos had already climbed the steps leading up to the park itself, when his head suddenly appeared through one of the portholes in the garden wall. 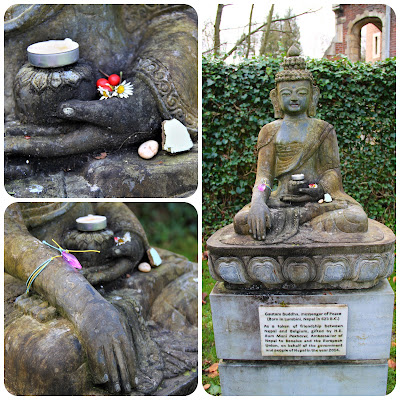 I always walk up to the Gautam Buddha - a gift from the Ambassador of Nepal - to have a look at the offerings people have made. This time, apart from a handful of stones and a tealight, he seemed to have been given some daisies and berries, while a kindly soul had tied a pretty bracelet to one of his wrists. 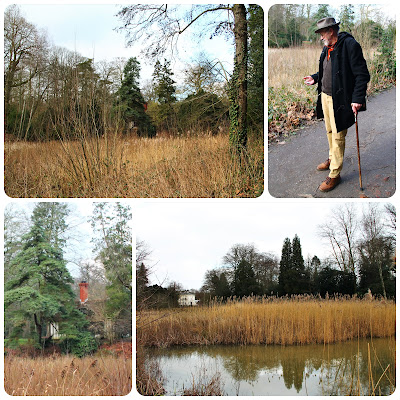 Up the steps we went and after passing through an avenue of trees, we were faced with a reed edged marshy expanse to our right, a true piece of wilderness at the edge of the metropolis which is the city of Antwerp.
Half-hidden by the trees we caught a glimpse of the enchanting gingerbread cottage which is taking pride of place in the castle's English-style garden. 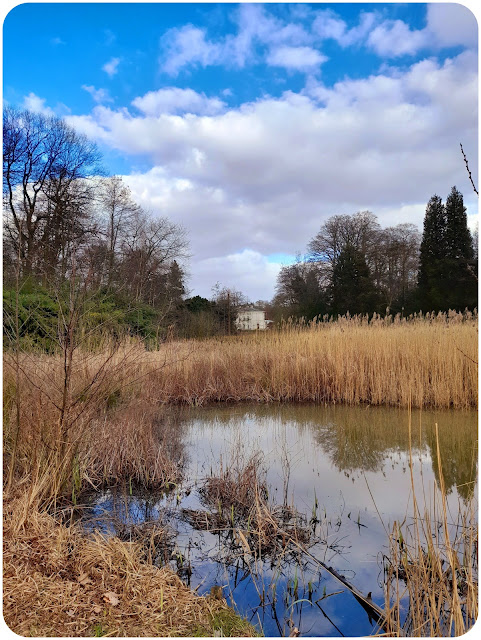 We took a shortcut by taking the grassy path bordering the marshy area complete with picturesque pond, where the castle itself, a romantic white wedding cake mansion renovated in the 1870s in late classical style, could be seen shimmering in the distance.
By a stroke of luck, the clouds parted, making way for a patch of blue sky and some itinerant sunshine just as Jos made this photo with his phone's camera. 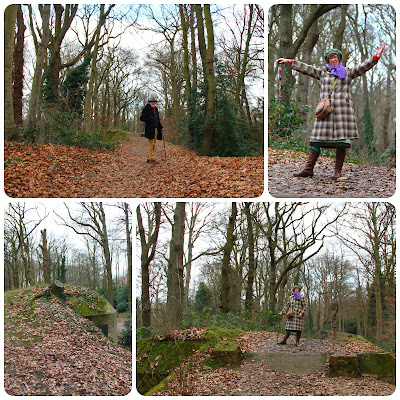 We walked the park's length, until we reached a series of bunkers at its other end. These were built by the Germans in 1943 as headquarters for the Atlantikwall in Belgium. There's a choice of paths here, and you can either take the one running alongside the bunkers, or the one running on top of them. We decided to be reckless, throw caution to the wind and take the latter!
So, that was the weekend all wrapped up.
As if to make up for lost time, the weather gods treated us to another string of gloomy days and lots of rain in the first week of February. Even stuck at the office I love a bit of sunshine to get me through the days, particularly when work is rather slow, which it was that week due to Chinese New Year. 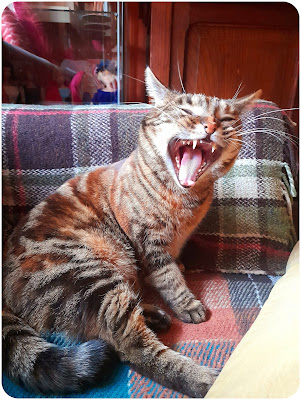 Meanwhile, back at Dove Cottage ...
In spite of the inclement weather, I made my escape from the office during lunch break, and I may even have snapped up a bargain in a high street shop, where prices were down to 70% off. 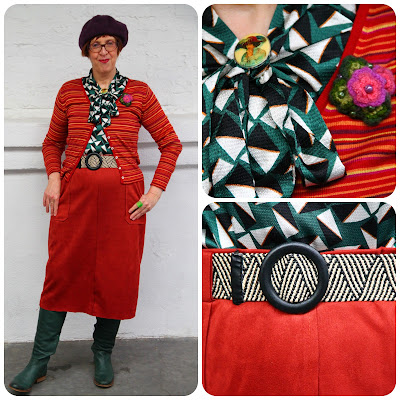 The bargain in question was this burnt orange skirt in a very strokable faux suede fabric and equipped with two generous pockets. Of course, I already had to wear it for Friday's charity shop trawl!
I didn't have to think very long about its possible companion, as this recently shopped pussy-bow blouse was still hanging outside my wardrobe waiting for its maiden outing. Apart from its contrasting green, black and white, the blouse's geometric pattern also has the faintest whisper of orange, making the match even more perfect. Funnily enough, and quite unintentionally, the blouse's origins lie in the same shop as the skirt! 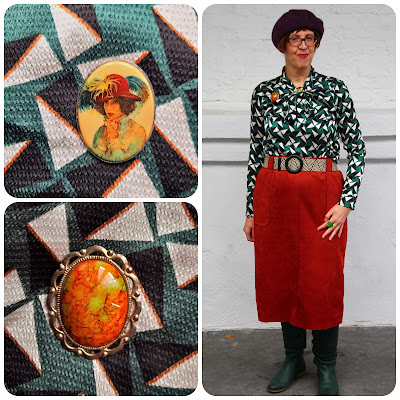 I struggled a bit finding a suitable cardigan to layer on top, until I spotted this striped one peeking out from the pile. Originally from H&M, it was charity shopped many years ago.
Both my belt and my beloved green boots were charity shop finds as well, while the scarf clip I tamed the pussy-bow with as well as my brooch were picked up at various flea markets. 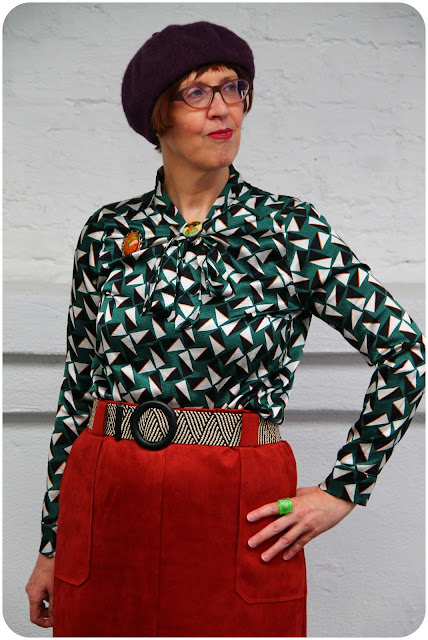 The purple mohair beret came from Think Twice, if I remember correctly. I kept it on for the photos as my hair wasn't looking its best.  As much as I love my berets, I'm finding it a bit of a struggle combining my longer bob with berets, glasses and face masks and still look okay-ish. 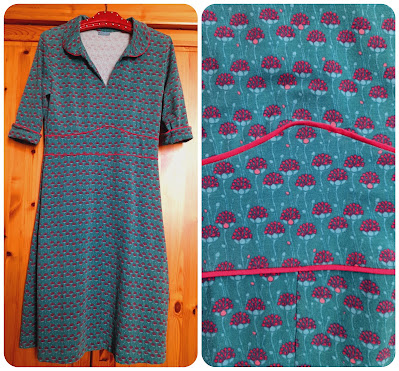 As usual, we cherry-picked two shops which are easy to combine. Unfortunately, pickings were almost non-existent in the first shop we visited, where I only found the belt on the bottom left in the below collage.
My rummage in the second shop, however, was much more successful.
The blue dress with its pink piping and ditto flower pattern is by Froy & Dind, a Belgian label which has been making sustainable fashion since 2011. 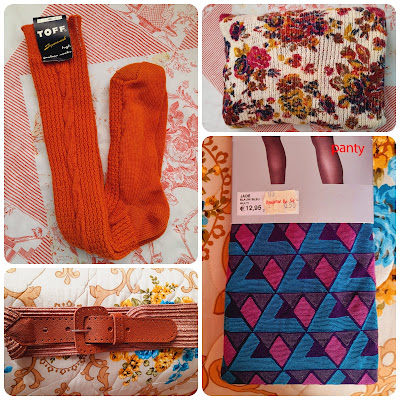 Other finds included a pair of deadstock vintage orange knee socks, a flower patterned eternity scarf and a pair of funky tights. The latter were deadstock too and from a well-known Belgian haberdashery and accessories shop, where they retailed for € 12,95. The charity shop's price label said € 0,50: that's more like it! 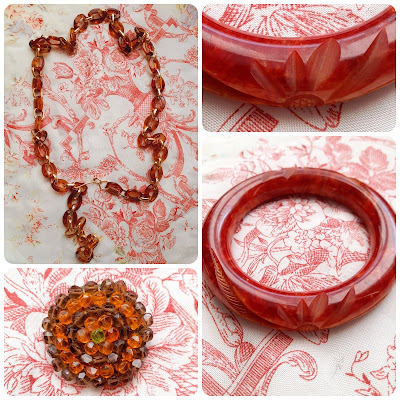 The faux-tortoiseshell chain belt was in among the necklaces, and thus priced as such.
The beaded brooch instantly caught my eye. It's quite rare to find brooches in charity shops here, and as we're still avoiding flea markets, my collection has somewhat come to a grinding halt.
The day's biggest surprise was the carved Bakelite bracelet for which, same as for the other items, I paid just € 1,50.
As lunch time was fastly approaching, we had a car picnic before continuing to our next destination. 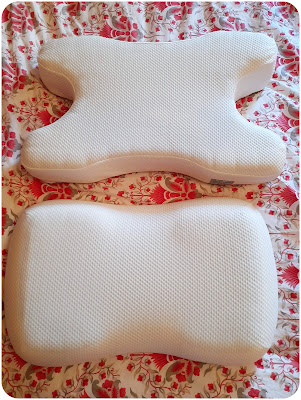 Our final and definitely most expensive purchase of the day were two new, state-of-the-art pillows. It was our 27th wedding anniversary and we decided to splash out. Mine is the butterfly shaped one on top, which is ideal for side sleepers, while Jos, who sleeps on his back, opted for the one on the bottom.
We've been using them ever since, and they have certainly made a huge difference. Still having weird dreams, though ...
Posted by Polyester Princess at 19:12