While February got off to a flying start, with Storm Corrie's glacial winds followed by the usual succession of grey and rainy days, my blog is still catching up with what I've been doing in January.

Picking up where I left off in my previous post, we've made it to the 22nd of that month, and yes, you've guessed it, the weather gods were still stubbornly refusing to send some well-needed and long overdue sunshine our way.

The bleakness of the day, which was accompanied by a measly 6°C, wasn't inviting us to engage in any outdoor activities. In order to make staying inside worth our while, though, I'd scribbled down a to-do list, fully intending to check off as much as I could. 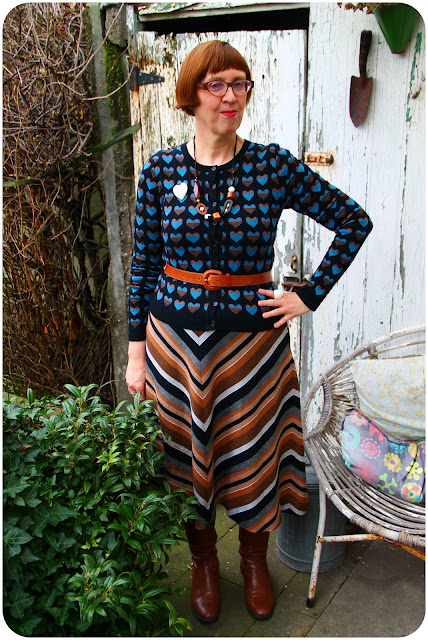 However, before I tackle the first item on my list, which involves a stint of sewing, let me show what I was wearing.
If you're wondering why it took me so long to wear my bargain of the century Diane Von Furstenberg cardigan, it's because I was looking for its perfect companion. I'd tried out and rejected a couple of likely candidates until I caught sight of this skirt, which was hanging at the side of my wardrobe awaiting its turn.  Putting the two together made for an eye-catching mix of patterns, the browns in the cardigan and the skirt instantly hitting it off. The skirt with its brown, black, grey and white chevron pattern was a Think Twice find back in October 2020. 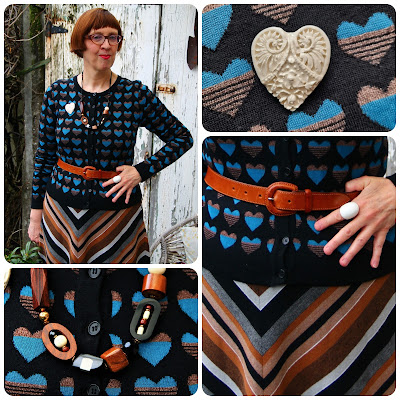 I wore the cardigan as a jumper, layering a black t-shirt underneath, and accented my waist with a tan leather belt. My necklace came from Accessorize who, back in the mists of time, used to have a shop near my office. With its mix of brown, black and white beads, it echoes the colours of the skirt.
As a courtesy to the white stripes I added more white in the form of a heart-shaped ceramic brooch - picked up in a crafts shop in Cardigan - and a white plastic ring.
My tan mock croc boots, which I was seduced into buying from a local shoe shop a couple of months ago, have fast become firm favourites. Apart from their obvious attraction, they are super comfortable and go with everything, so they are hardly off my feet. Here, I only wore them for the photos, as we didn't leave the confines of Dove Cottage all day. 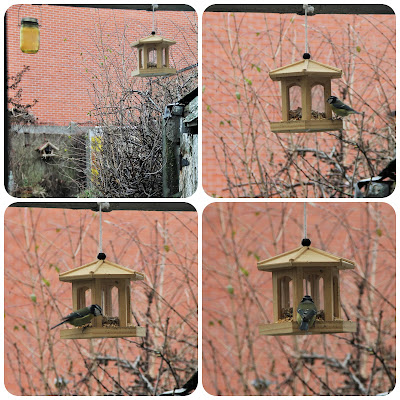 Ok, let's crack on with that sewing project, shall we? No, wait, I think I'll procrastinate some more by joining Bess in watching the boisterous blue tits who flock to the feeder just outside our back door ...
I'd fallen in love with the swirly blue, white and purple pattern of this vintage dress during Friday's charity shop trawl but, as is often the case, I didn't like its buttons.  This, of course, was easily remedied by a rummage through my stash of vintage buttons, which yielded the perfect blue ones. They've even got a swirl of their own! 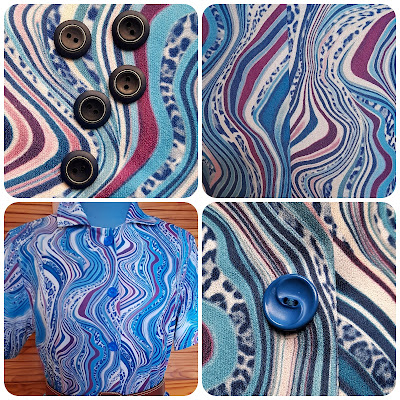 Here's the dress in question, modelled by Angelica. She was also eager to try on the second dress I found in the same shop. It's originally from a high street shop called LolaLiza, where I've been known to buy things brand new once in a blue moon. Case in point is the dress I bought in the sales the other week. 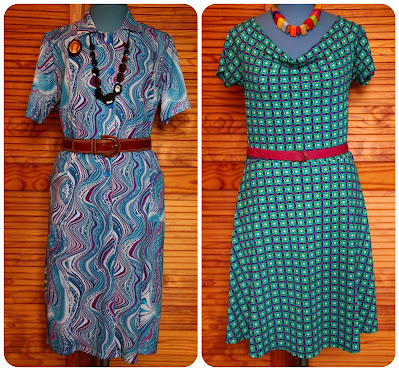 Photographing Friday's finds was next on my list.
Apart from the two dresses, these included a green and turquoise wooden beaded necklace, a vintage seed-beaded brooch, a vintage Trevira scarf in a funky pattern and a moss green frilly woollen scarf. 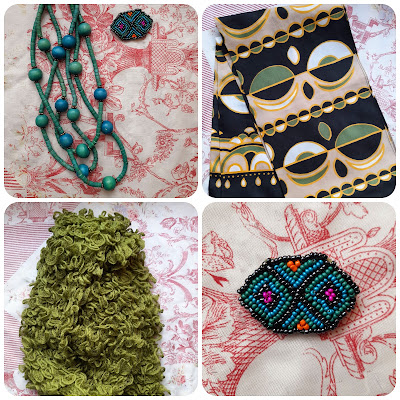 And yes, I did find yet another faux fur gilet, this one in a a delightful blush pink. The peasant style blouse with its psychedelic pattern was Friday's final find. 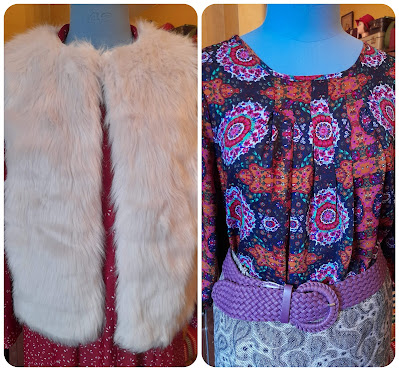 The rest of that Saturday was filled with a string of mundane household chores which included doing a load of washing, changing the bed linen and sweeping the upstairs rooms. These were followed by the much more pleasurable pastimes of catching up with blogland and writing a blog post.
Oh, and I did some reading too. I'd just started The Moonflower Vine by Jetta Carleton, a rediscovered American classic originally published in 1962, a family saga set in rural Missouri in the early 1900s. Although I haven't reached the end yet as I write, this is one that's going to end up on our shelves rather than being redonated. 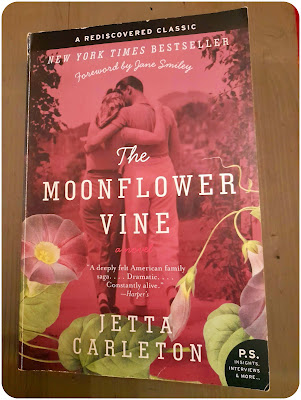 It was the same dismal weather we woke up to on Sunday, but this time we were determined to go for a walk no matter what.
In order to get me in the mood, I wore all the colours!
The multi-coloured cowl neck jumper is by posh Belgian label Caroline Biss and was a charity shop find this time last year. I combined it with a pinkish-red polyester and mohair blend skirt from Think Twice, which has the added benefit of being lined for extra warmth. 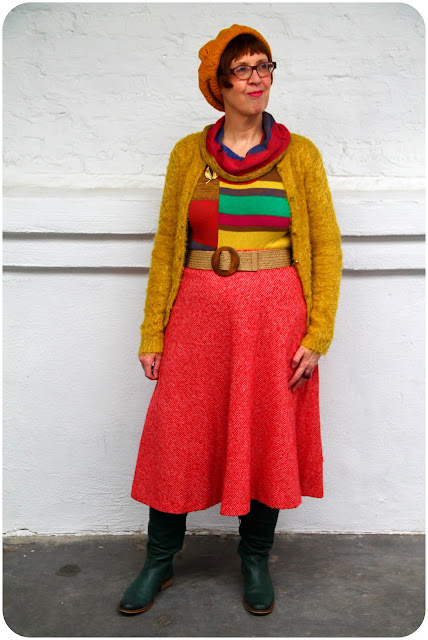 Apart from the belt and ring, which were both retail buys, and the brooch, which came all the way from an antiques centre in Shrewsbury, all other components of my outfit were charity shopped. 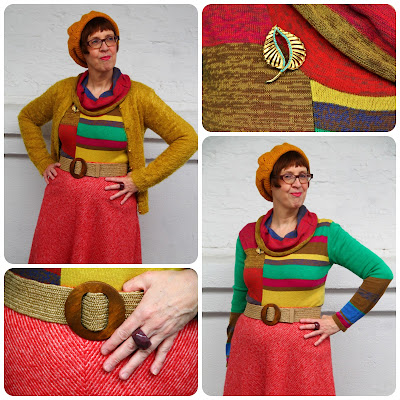 After a morning of pottering and procrastination, we were more than ready for a breath of fresh air.
Casting around for a suitable place for a short walk, we suddenly remembered passing what looked like the entrance of a nature reserve when we returned from a charity shopping trip the other week.
Although we'd noticed there was plenty of space for parking, this turned out to be quite a different story on a Sunday, so that we had to drive around a bit before settling for a space in the parking lot of a local youth club. 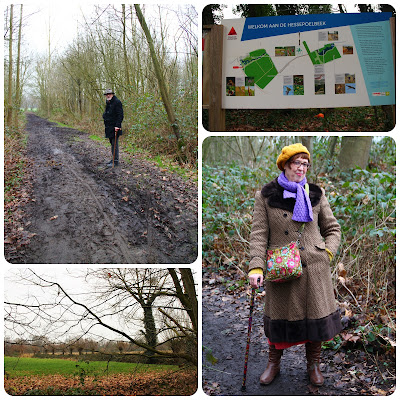 Here, I exchanged my lovely green boots for my pair of old brown ones reserved for walking, still caked with the muddy evidence of our last walk. Then we grabbed our walking sticks and went off.
The eternal rain had turned the woodland paths muddy but that didn't deter us. At least the mud wasn't of the icky sticky clay variety trying to suck you in and root you to the spot! 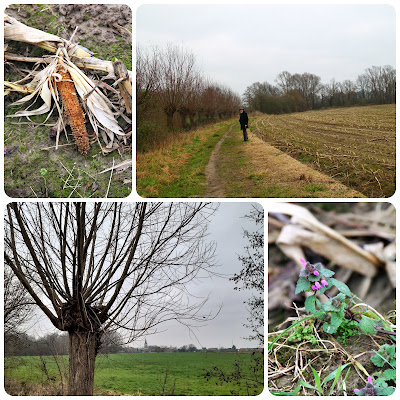 At first the wooded area which is called Hessepoelbos (bos is Flemish for wood) seemed rather small and not all that exciting, but then we came across a wooden gate-like structure giving access to a track weaving its way between a row of pollarded willows and the remains of a maize field. Mixed in with the dry stubble of the field we spotted early signs of Spring in the form of some clumps of pink dead nettle impatient to get things going.
A glance between the willows was rewarded with a view of the village of Waarloos and its church tower. The village borders ours and the two villages were officially merged in 1977. 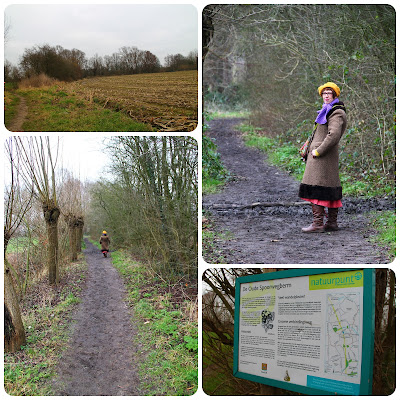 The path veered off and narrowed, until we came across a sign announcing a second nature reserve, called De Oude Spoorwegberm, which translates as the Old Railway Embankment.
Now, this one we had heard of before but, once again, we'd never visited. It has been established on a section of the former 25A railway line, which used to connect the towns of Mechelen and Wilrijk. It was opened in 1905 and carried travellers until 1959 and goods until 1970, after which the deep-lying track was filled in. 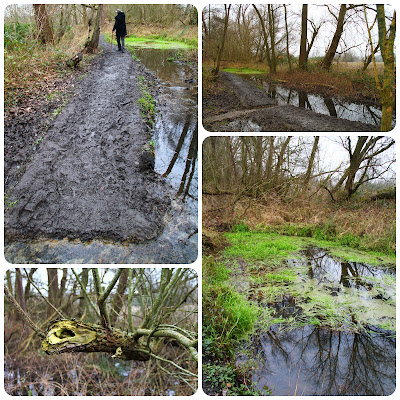 Although we had no idea where it would lead us, we decided to investigate and follow the track. Here things only just managed not to go pear-shaped, as the mud increased in volume and intensity, and part of the track was flooded as a result of the swollen brook running next to it.
The reserve is a long, green nature corridor for many plants and animals. With its length of 5 kilometer and a width of only 20 to 50 meters, the Old Railway Embankment is one of the longest nature reserves in Flanders. 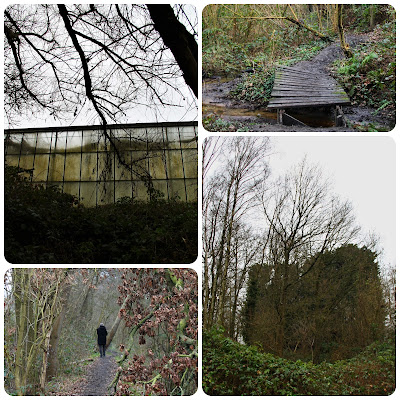 Between the thicket on our left, we kept spotting the church spire in the distance, so we knew that whenever the opportunity of a left turn arose, we would be able to take a shortcut back to where we'd left our car.
We would do so eventually, but not before we came across some creepy moss-encrusted glasshouses which suddenly appeared right next to the track.
After crossing a rickety wooden bridge, its slats wonky and out of shape, a dense thicket of conifers loomed, looking for all the world like they were hiding Sleeping Beauty's castle. 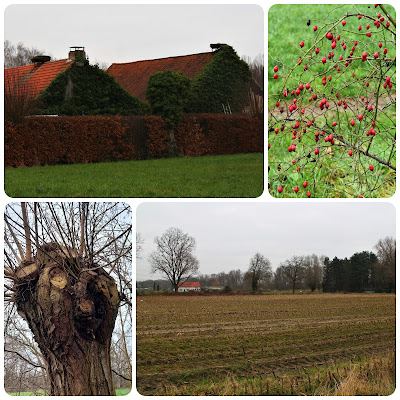 At last, the track crossed a tarmacked lane, which we took into the direction of the village, passing some atmospheric ivy-clad farmhouse buildings, which appeared to have several stork's nests built upon their roofs. We'll have to go back there in Spring and see if we can spot any actual storks!
Plans are already afoot for a return visit and further investigation of this enchanting reserve. 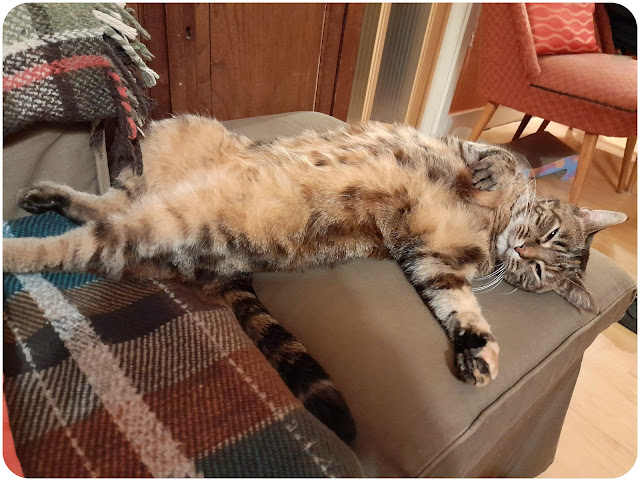 All that exertion and fresh air, however, had made us light-headed and sleepy, so once we got home we joined our furry creature for a nap. I promised Sheila another Bess photo, so here it is!
I'll be back with more walks, and - miracle of miracles - a bit of sunshine in my next post and hope you'll join me again then.