How fickle the weather was in January's final week! Sunny days alternated with gloomy ones, and the temperature dropped from 7°C on Monday to a mere 3°C on Wednesday. If on Thursday, in true yo-yo style, the mercury had jumped up to 6°C again, it felt decidedly cooler. On top of that, I'd woken up to a migraine which painkillers wouldn't be able to shift all day. To say I was glad to be on my way home is a bit of an understatement.

Strangely enough - or perhaps not! - there was no sign of any lingering headache on Friday when, after our customary fruit and yogurt breakfast, we were ready for our weekly trip to the charity shops.

What's more, there were sunshine and skies of blue to be spied outside. Jos's weather app said we'd get highs of 8°C, but I didn't want to take any chances and wore a jumper. Almost unthinkable a couple of years ago, I now find myself wearing jumpers regularly and not just when temperatures drop below freezing point. Surely this must be a sign that I've finally waved goodbye to the worst of the hot flushes! Phew! 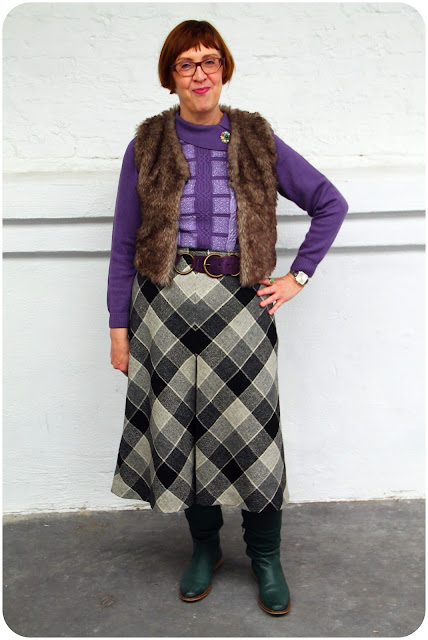 The jumper in question is vintage C&A, a charity shop find earlier in January. I was drawn to its unusual collar, its purple and silvery grey plaid pattern and its vertical stripes of cable knit.
Its collar invited the addition of a brooch, for which I picked this one containing multi-coloured stones, a flea market find in Carmarthen, Wales, in June 2015. Its companion, which I pinned to the jumper's bodice, was a flea market find as well, but found much closer to home. It's by Miracle, the trade name of A. Hill & Company Ltd., who were originally located in Birmingham. They started manufacturing jewellery in 1946 and, although they are still in business today, they have since moved to Cornwall. 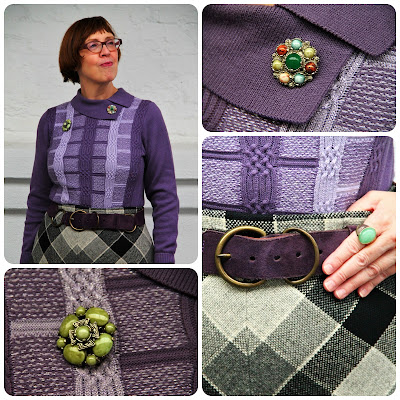 The black, grey and white plaid skirt is vintage Gor-Ray, and was charity shopped in December 2019, while a different charity shop supplied my beloved tall green boots around the same time.
Both the purple suede belt and the cropped furry gilet were the result of recent charity shop rummages shown on the blog not all that long ago. In fact, the only visible item in my outfit which wasn't bought second hand is my ring with its pale green stone. 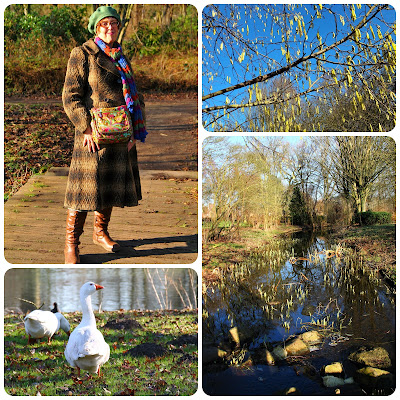 Yet again, we visited two shops, which are about 7 kilometers apart. Our second shop that day was the three-storey one which is a stone's throw from the park, so there are no prices for guessing what we did afterwards. With the sun still out in full force, I changed into my old pair of boots which live in the boot of our car and we went for a stroll. It was warm enough to ditch the gilet! 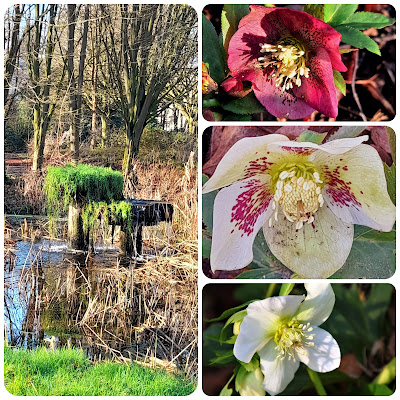 The constellation of yellow catkins against the bright blue sky made my heart leap for joy! As did the discovery of several species of Hellebore, which had popped up in the borders. They're quite a bit earlier than last year, but then again we spotted Snowdrops here in Mid-December!
The park's Brutalist fountain keeps showing signs of neglect, and has become quite overgrown in recent years. Nevertheless, I was charmed by its mossy green hairdo on this Springlike January day. 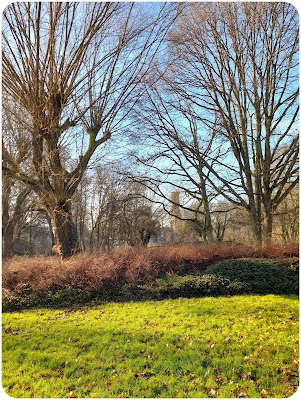 We walked into the direction of the castle, approaching it from a different direction than we did on our foggy walk two weeks previously. Soon, we were catching tantalizing views of its tallest tower through the branches of the skeleton trees. Once there, we circuited the moat and peered through the wrought iron gates barring the entrance to the bridge. All but hidden by encroaching ivy, its message only just readable, Jos discovered the sign on the bottom right in the undergrowth next to the path. Apparently, it's strictly forbidden to step on the ice on those rare occasions the moat has frozen over. 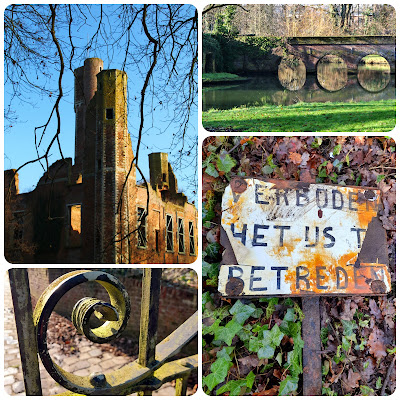 We sat down for a minute on a bench with a view of the castle, basking in the sunlight until clouds were starting to eclipse the sun. By the time we'd climbed up to the River Nete's towpath, we could see the fog making its way in, and it felt as if the temperature had dropped several degrees, making me regret the removal of my furry vest. This was just mere minutes after we'd been sunbathing on that bench! 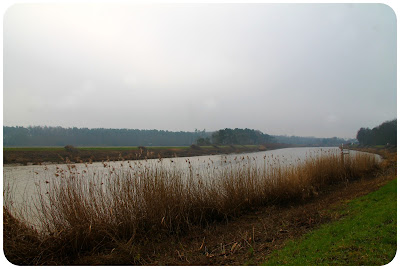 We drove home through increasing fog, but thankfully it had all but cleared up again by the time we reached our village. We jokingly said that it must have been due to the high altitude of the place we'd come from, which was in the foothills of the Vosberg (Fox Hill), all of 30 meters high.
There were sunny spells as well as cloudy ones on Saturday, and although at 12°C it was very mild for the time of year, there was quite a lot of wind. 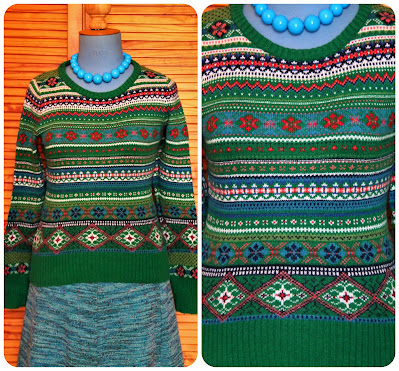 I spent the morning doing some leisurely pottering and employing Angelica to model Friday's charity shop finds.
First up is this Norwegian style jumper by H&M which, drawn by its gorgeous green colour, I couldn't pounce upon fast enough. 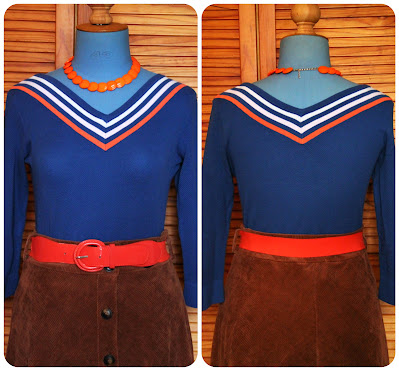 I was attracted by the nautical vibes of this three-quarter sleeved blue cotton top with its white and orange striped V-neck. In my mind's eye, I've already styled it with several of my Summer skirts. 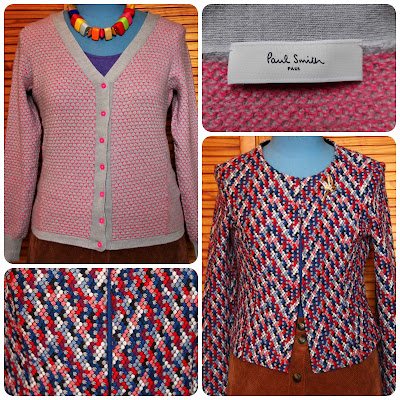 The pink and grey cardigan with its bright pink buttons is by Paul Smith. This particular shop does not distinguish between labels, so I paid the going price for cardigans, which I think is about € 4,50.
The buttonless cardigan, which closes with a single hook and eye if required, is by the German Tom Tailor label.
These were all from the first shop we went to. Unusually, pickings were meagre in the second shop, where my only finds were a belt (not pictured but I'll be wearing it on the blog soon) and a vintage souvenir umbrella from Rome. Obviously, Bess needed to investigate this strange contraption! 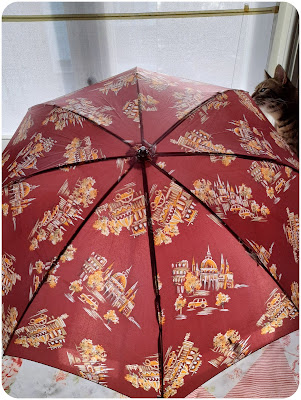 Although the sun kept playing a game of tag with the clouds, we were champing at the bit to go for another walk. Striking the iron while it's hot, and all that. Discussing our options over lunch, it suddenly dawned on us that we hadn't gone to De Schorre, the provincial domain in nearby Boom, since time immemorial. Actually, make that March 2019, as that was the last time I blogged about it. 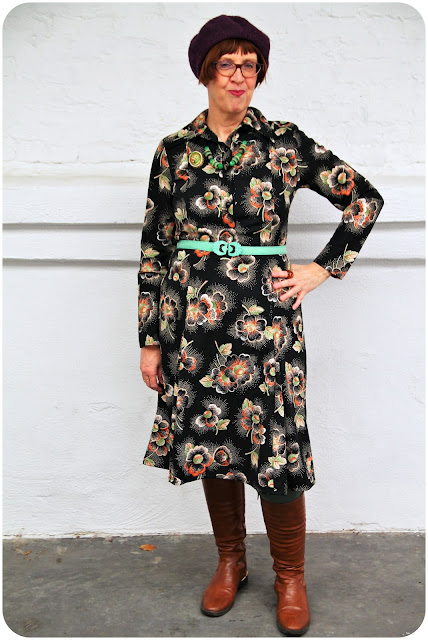 Before we go, here's what I wore that day.
In spite of this 1970s dress with its Art Deco-style pattern being one of my favourites, I think its last outing was pre-pandemic as well. Its final appearance on the blog dates from February 2020, when it joined me on our Silver Anniversary trip to Bruges. 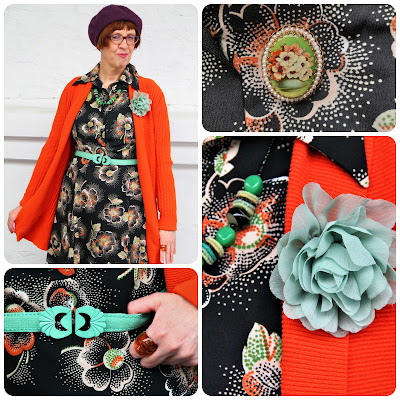 The floral ceramic brooch rimmed by tiny pearls was a flea market find, although I can't remember where or when, and my necklace, with its plastic beads alternated with stacks of felt circles, was charity shopped. The belt with its unusual metal buckle came with a dress I no longer own.

A chunky long-line orange cardigan, with a pale green floral corsage pinned to it, was layered on top. The eagle-eyed may catch a glimpse of my green tights, and I was once again wearing my caramel mock croc boots, which were swiftly exchanged once we'd reached our destination. 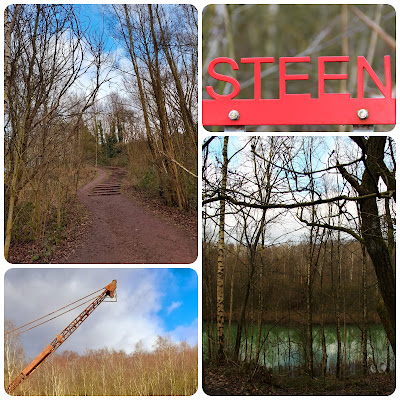 De Schorre, a recreational domain and nature reserve established on the site of former clay pits, is renowned the world over because of  the legendary EDM festival Tomorrowland which is taking place during two weekends in Summer. The domain is closed off for casual visitors like us whenever the festival - or any other event - is taking place.
After parking our car, we took a muddy path sloping down to the deepest part of the domain, where a rusty old clay dredger reigns over an enchanting deep green pool.
A red metal sign spells the word Steen (transl. stone) and is part of an art installation which pays tribute to the area's brickmaking past. 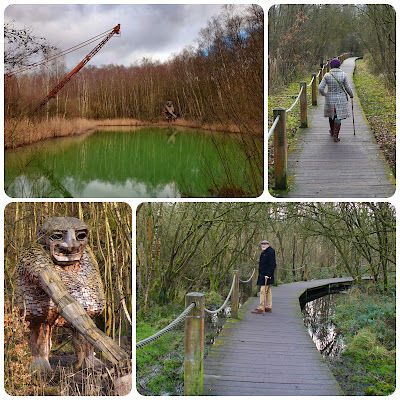 On the further reaches of the pool, which is actually a water-filled former clay pit, a strange creature was eyeing us from its perch between the reeds and trees.
This is Mikil, one of seven giant trolls installed in the summer of 2019 in honour of Tomorrowland's 15th anniversary. Apparently Mikil is scooping water from the pool with a bucket, but it was impossible to get close enough to him to ascertain the fact.
There's a total of seven trolls scattered around the domain, but there's no itinerary you can follow to find them. You have to actively go and search for them which can be quite tricky, particularly in the lush Summer months, as some of them are rumoured to be very well concealed.
From the green pool, we followed the boardwalk path meandering through the domain, noting its marshy conditions caused by the excessive rainfall of the last couple of months. 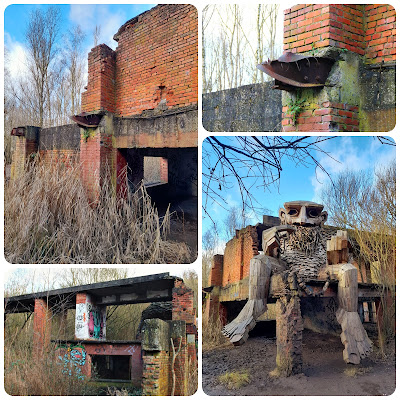 Eventually the boardwalk ends and merges with the main path through the domain. This soon passes a ruined and graffitied brick building and some elevated tracks on tall brick pillars, another remnant of the area's industrious past.
We always stop for photographs here, but now we even had more reason to do so. Sitting at the back of the building and almost dwarfing it was Hannes, who loves making necklaces with wooden pearls he forages in the forest. Isn't he magnificent? 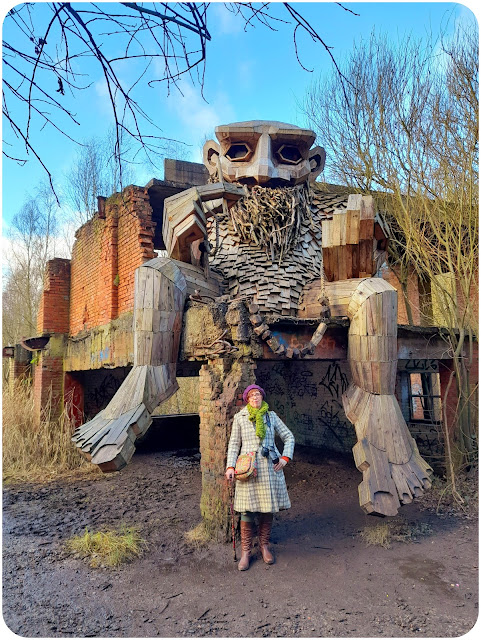 The trolls, by the way, are created by Danish artist Thomas Dambo using old pallets, recycled wood, broken branches and fallen trees. They vary in height between 7 and 18 meters. 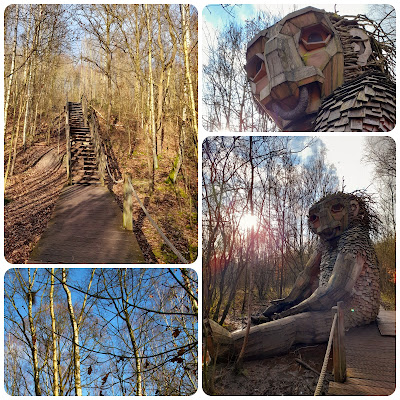 We wandered somewhat at will, and only met three of the trolls. The final one, a creature named Arvid, was sitting astride the boardwalk we'd rejoined on our way out. Arvid, it seems, is a she, and she diligently looks for dead branches in the forest, with which she is making of works of art. Well, that's what it said on one of the Internet sources I used to research the trolls.
After waving goodbye to Arvid, it was time to rejoin our car, making use of the flight of steps on the top left to climb out of the domain. There's another flight of steps after this one. Definitely not for the less nimble or those with rickety knees!
Posted by Polyester Princess at 19:01