It's beginning to look a tiny little bit like Christmas

In spite of all the time I've got on my hands, my blog keeps lagging seriously behind.

This had me stumped at first, until it dawned on me that it is simply because I have more time.

Where in the past, my blog mainly covered my weekend escapades, I'm now diligently recording all my non-working days which, apart from the weekends, also include Tuesdays, Thursdays and Fridays! And even if on quite a few of those days nothing much seems to be happening, I'm still aiming to show you what I've been wearing. Getting dressed up, after all, keeps being one of my greatest pleasures and in these strangely warped times often the highlight of my day. 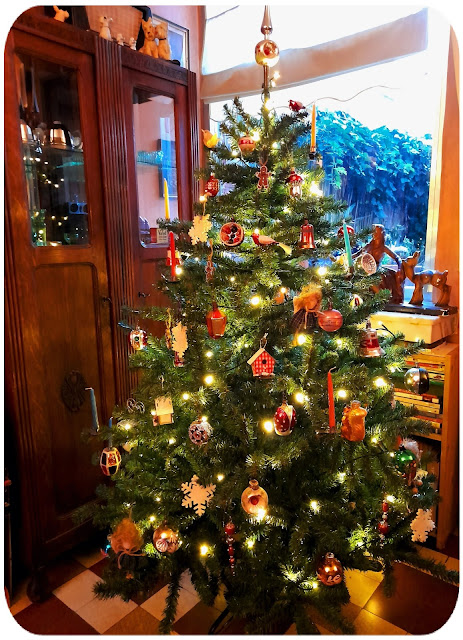 But tomorrow is Christmas and, although my diary's next installment is supposed to continue with Thursday, 10 December, it simply wouldn't do not to bring you a bit of Christmas cheer!
So, I'm setting the time machine's controls for the Thursday of last week, briefly skipping one week ahead to the day when we put up and decorated our Christmas tree.
Not being much of a Christmas person at the best of times, this year in particular I wasn't feeling even remotely in the mood, and would have gladly given the silly season a wide berth if Jos hadn't insisted on the tree. 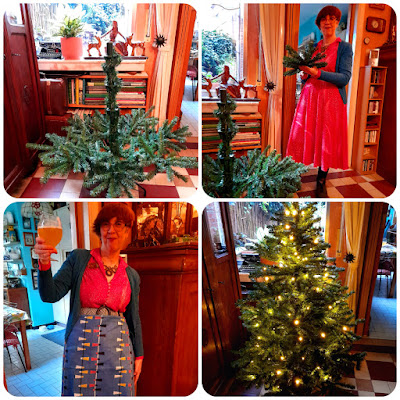 And you know what, once Jos had lugged the box containing our faithful "faux fir" out of the basement and we'd started to assemble the damn thing, I actually began to feel ever so slightly festive.
The radio was playing 60s pop songs, to which we sang along, and slowly but surely the tree emerged from its colour-coded components. After we'd completed the next stage, the slightly bothersome task of putting in the string of 100 LED lights, I'm sure you'll agree we deserved a glass of non-alcoholic beer!
Note my funky apron fashioned from a piece of 1960s tablecloth - which used to grace festive tables during my childhood - fastened at the back with a safety pin. Klassy, as Sheila would say! I was wearing this to protect my frock's fragile fabric from the faux fir needles. 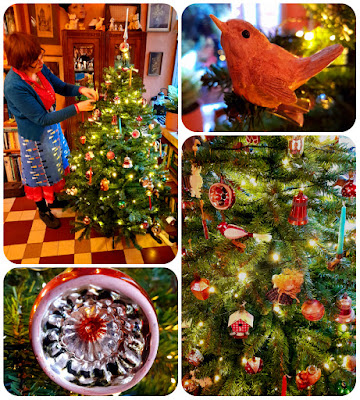 Our decorations are a jumble of vintage baubles - some of them heirlooms - and anything that has tickled my fancy over the last twenty-five plus years, which includes miniature bird houses, rag doll angels, felt icicles and birds such as the clip-on wren on the top right, which is one of a pair. Oh, and I've got a pair of sparkly silver chairs as well.
The eagle-eyed among you might spot some candles too. Do not worry, though, they are obviously never lighted. They are vintage and, with their little clip-on candle holders are heirlooms from both our families. 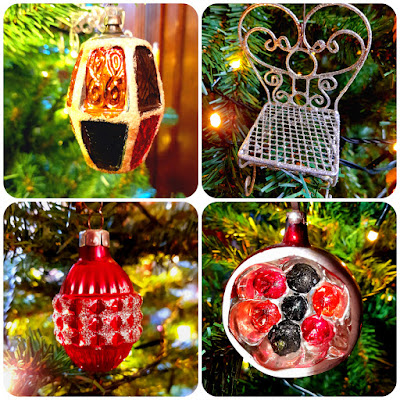 OK, that's quite enough Christmas stuff, I should say.
Now let's get back into that time machine and return to the order of the day, which is what we did two weeks ago on Thursday. 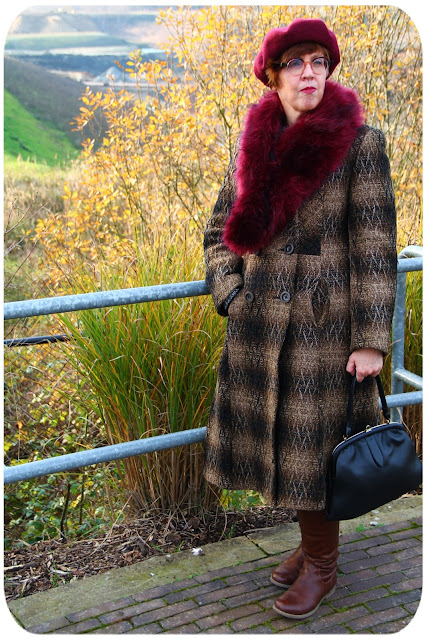 The day didn't start very promising, all grey and overcast and accompanied by a chilly 5°C, so that we'd resigned ourselves to yet another day spent at home.
But lo and behold: while we were having lunch the sun suddenly decided to grace us with her presence after all!
Too late in the day to go for a proper walk, we were nevertheless in need for a breath of fresh air or two, so we walked down to our garage and drove to the water tower in the neighbouring village of Reet.
I dressed up in some of my warmest Winter finery, which included a coat picked up in Think Twice last year, accessorized with a burgundy faux fur stole (a sales bargain back in 2018) and a matching burgundy beret. 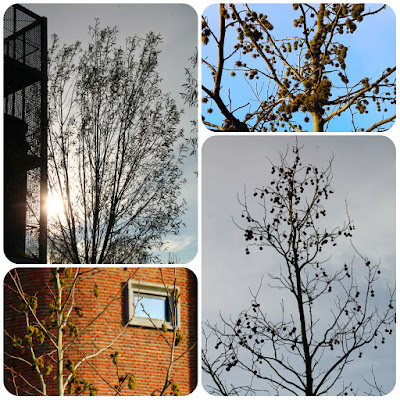 December's sun was sitting low in the sky, caught in the branches of the trees. Some of them were bearing strange fruits on their bare branches, which made them look like some kind of freakish Christmas trees, their baubles put on willy-nilly by hasty, clumsy hands. 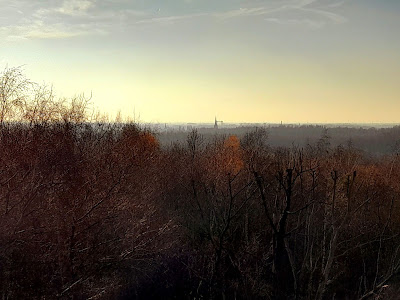 We climbed the tower in the hope of spotting the uppermost spheres of the Atomium in Brussels, about 30 kilometers away. The last time we were here, on a hot Summer's day, the view had been hidden behind the lush foliage of a line of trees. But although these had all shed the last of their leaves by now, we were once again thwarted by nature as it was too foggy for any clear, distant views.
Nevertheless, the ethereal ghost-grey mist which was swathing the landscape, the flat horizon only interrupted by a far-off church steeple standing proud, evoked instant nostalgia. 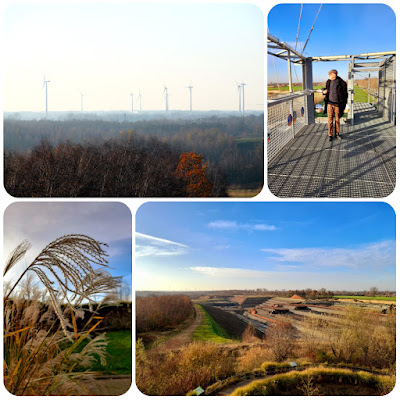 Directly below us, a massive gash in the landscape has been made by one of the last vestiges of the once powerful and prolific brick-making industry. From up here, it looks like a Lilliput world, complete with Dinky Toy trucks controlled by Gulliver's hands. 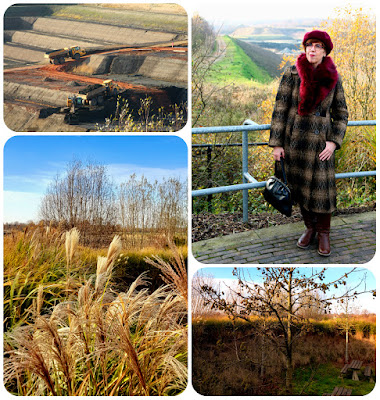 The village of Reet might be a sleepy backwater, it is blessed with a small charity shop, where obviously we had to stop on our way home.

Initially, the only item thrown up by the clothing aisles was a zippered cardigan for Jos - not pictured as he is so enamoured with it he is refusing to take it off - but then I spotted a rail filled with festive clothing. Among these, a glorious vintage frock in golden yellows and oranges threaded with Lurex! 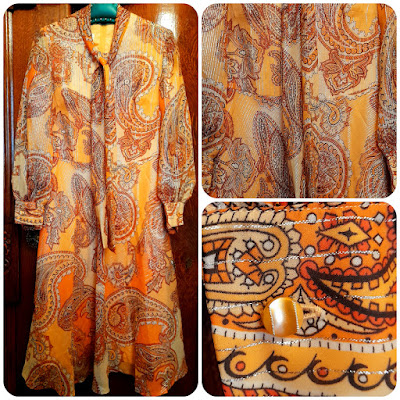 It's got a giant Paisley print, a pussy bow, gorgeous buttons at its cuffs, and it was my size! No need to think twice about this one! Strangely enough, it's from the same label (Ein Fink Modell) as the frock I found the other day. 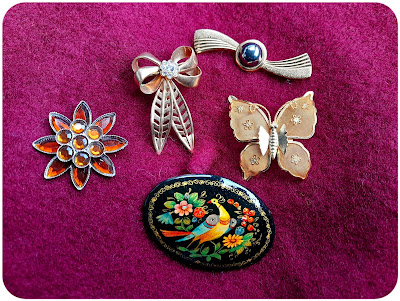 I also picked up several brooches, priced at € 0,50 each. I took a snapshot of them while I was waiting in the car for Jos when it was his turn to go into the shop. Note the background fabric, which belongs to my beret! 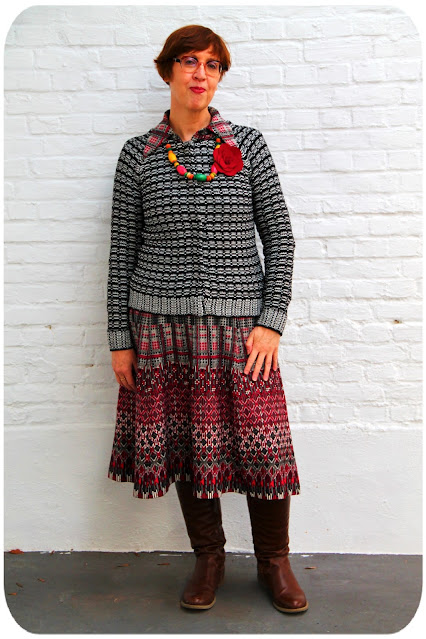 Back in the garage, we took some photos of what I was wearing underneath my coat.
The pinkish-red and grey dress with its folksy print was another Think Twice find from last year. On top, I wore the chunky black and white cardigan I'd picked up at a charity shop a couple of days earlier.
At my waist, a pinkish-red leather belt, which was an old retail buy, as was the felted flower corsage I pinned to my cardigan. 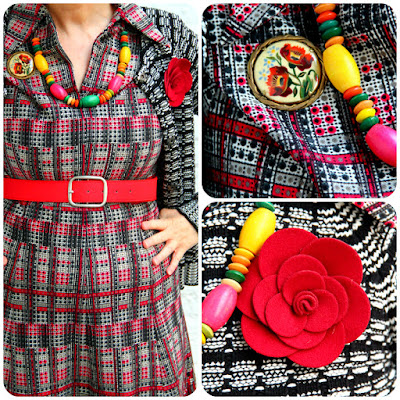 The multi-coloured wooden beaded necklace was charity shopped, while the vintage ceramic poppy brooch was a flea market find.
No poppies of any kind remain in our garden, but there's still plenty going on. There's the last of the Oxeye daisies, for instance, while most of our Geraniums seem to refuse to give in to the inevitable. The pink Garvinea -  a hardy garden Gerbera - we bought back in June (bottom left) has been an absolute delight, even if by now the last of its flowers is dying gracefully. Meanwhile, the tiny leaves of our Cotoneaster, forever in competition with its berries, are still stealing the show with their fiery reds. 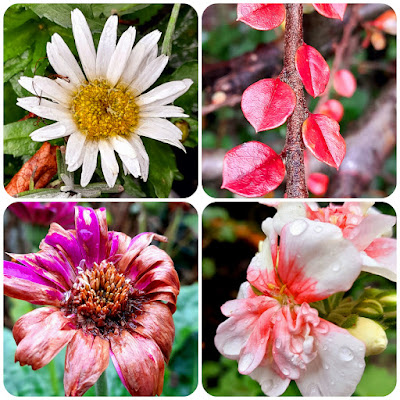 Friday was a wet and dismal day, with a slight rise in temperature. Wanting to strike the iron while it was hot, we visited another charity shop, where once again I was in luck.
I'll leave my finds for a next post, but before I go, I'll show you what I was wearing that day.
You've seen my orange and purple plaid H&M skirt quite recently, but that didn't stop me from wearing it again. This time, its companion was one of the tops I found at the charity shop earlier that week. 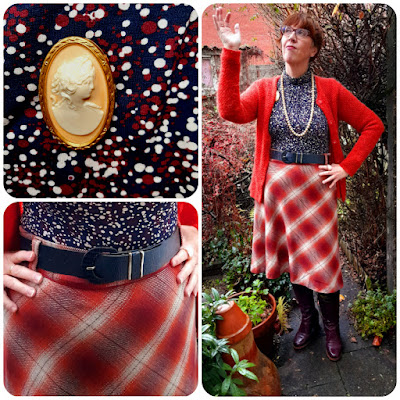 It's a thin, navy polo neck from River Woods, sprinkled with white and burgundy spots. It had been years since I last wore a polo neck of any kind, as I found it was not compatible with the menopause, but I actually loved wearing this one!
The fluffy orange Pauline B. cardigan (charity shopped) was perfect to ward off the chills.
I added a navy belt, another charity shop find, and a long beaded necklace which was a gift from a friend. My Cameo brooch was part of my birthday Think Twice haul back in September.
So, that's it for now.
All that's left is to wish you all a wonderful Christmas. No matter how you celebrate it, please do it responsibly. Stay safe and be extra fabulous!