It was the morning of our first full day in Beernem near Bruges, and we were about to have breakfast at our lovely B&B. Oh dear, that's rather a lot of B's in one sentence, isn't it?

But before our host, Veronique, arrived bearing fresh fruit juice and coffee, we took a couple of minutes to take some outfit photos, as I was desperate to show you one of my latest Think Twice finds.

For once, I didn't wait for the next of their famous sales to roll along. Still, it may come as a surprise that I didn't buy the dress the first time I clapped eyes on it. I took it from the rail, noting its utter perfectness, then thought of all the long-sleeved dresses which were still waiting in the wings of my wardrobe for their turn to be worn. So I put it back and left the shop empty handed. 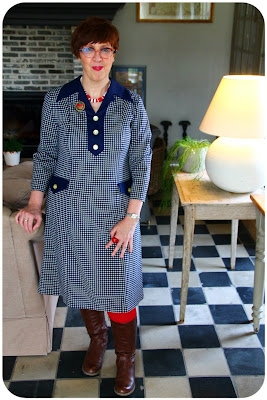 But once back at the office, my thoughts kept returning to that perfect harmony of navy and white houndstooth and plain navy collar, placket and pocket tabs, the latter two accented by pearly white buttons. A true classic, both in colour and in style.

Nevertheless, I didn't return to the shop until the next week when, much to my surprise, I found the dress still waiting for me. It must have been fate so, needless to say, this time I made sure not to leave the shop without it. 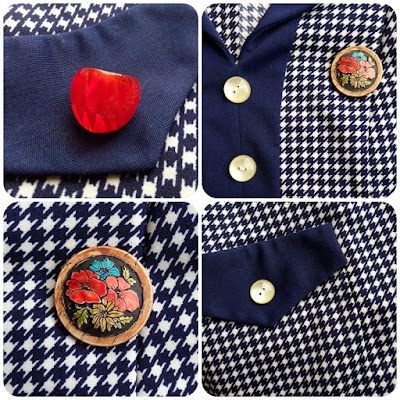 Who doesn't love a blue, white and red outfit? I certainly do, so accessorizing the dress was a doddle. I added red opaques, a red and white beaded necklace and a red plastic ring. More red appeared in some of the flowers on my carved wooden brooch. 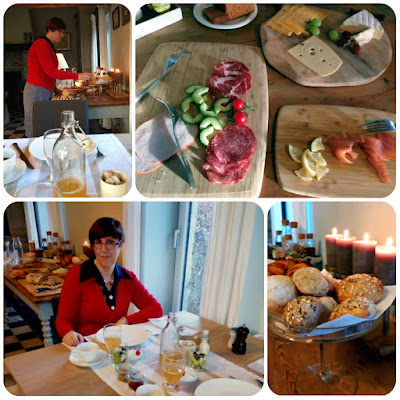 So, breakfast! We were certainly spoiled for choice. Starting with fresh fruit salad and yummy, creamy yogurt, we then indulged in freshly baked bread and a choice of rolls, accompanied by smoked salmon, a selection of cheeses and meats and, of course, Veronique's delicious home made jams, which came in tiny glass jars.

For those with a sweet tooth, there were croissants and chocolate buns, and there were a range of cereals to choose from if one was so inclined.

In fact, there was such a glut of delicacies, that we had to decline Veronique's offer of boiled, fried or scrambled eggs. 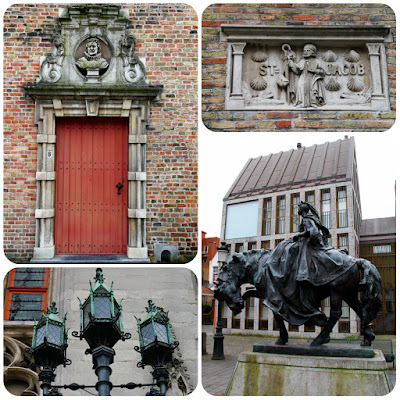 After breakfast, it was time to start the day's adventure, so we instructed Marie-Jeanne, our long-suffering satnav, to take us to Bruges by way of her much-loved country lanes. Needless to say, she was happy enough to oblige!

After parking our car, we decided to walk into the direction of the main square, avoiding the shortest route which would take us along Bruges' main shopping street. Our route took us along a parallel street, which seemed to be home to the town's more exclusive shops. However, we soon veered off, arriving in a peaceful, small tree-lined square where modern and ancient architecture seemed to be living happily side by side.

The equestrian statue is called Flandria Nostra - the horse-riding lady is said to represent Mary of Burgundy (1457-1482) - and was designed by sculptor Jules Lagae in 1901. 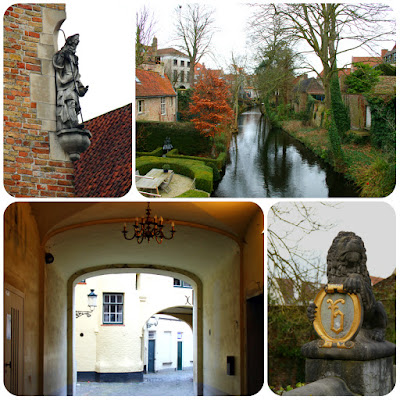 From the square, a narrow street lead down to a canal, the Speelmansrei, which was crossed by a humpbacked stone bridge guarded by a pair of haughty lions.

As crossing the canal would have taken us too far from our intended destination, we retraced our steps and meandered through a maze of streets, taking in the abundant and often quirky architectural details until we spotted the tower of  the St. Jacobskerk (St. James Church). Having already visited the church itself on a previous visit, we skirted this until we arrived at the eponymous St. Jacobsstraat (St. James Street).

At the end of this street, the market square, where we planned to have lunch, beckoned, but we met with one or two distractions, the first one being Think Twice, whose Bruges shop is about half-way down this street. 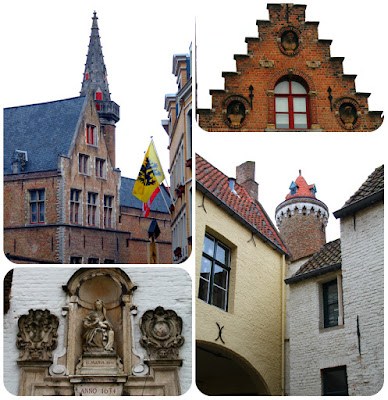 It almost goes without saying that the shop couldn't be passed without going in for a little browse. And yes, I might even have made a purchase, which I'll be showing you later in this post.

By then it was noon and a faint rumble in our stomachs told us it was time for lunch. 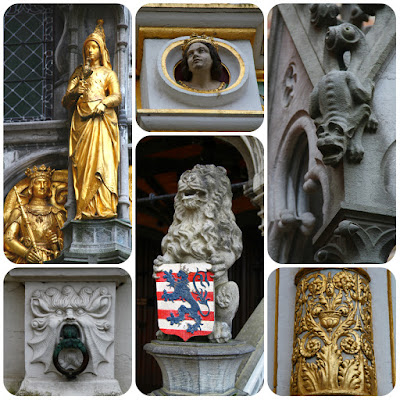 Afterwards, we crossed the market square and made our way along a pedestrianized street lined with the inevitable tourist trap shops selling waffles, chocolates and all manner of lace, towards the Burg, undoubtedly Bruges' most impressive square.

Even the road works obstructing one side of the square couldn't detract from the splendour offered by the Brugse Vrije (Liberty of Bruges), the City Hall and the Basilica of the Holy Blood.

As I've already blogged about these on a previous visit, I just snapped some of the details which caught my eye and made them into a collage. 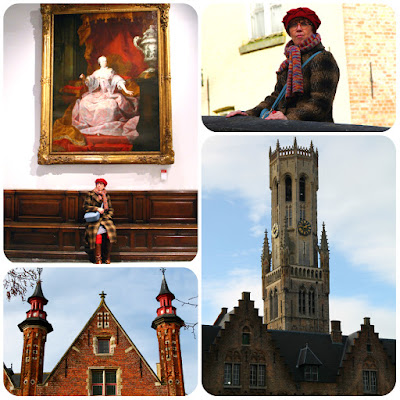 We briefly entered the town hall, where I sat down beneath one of the huge portraits in the picture gallery which can be visited free of charge.

Then, with one backward glance towards the Belfry tower, we continued on our way to our ultimate destination for the day. 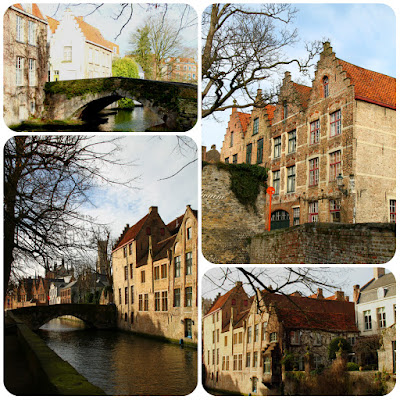 We strolled along the cobbled Groenerei (Green Quay), marvelling at the view, at this time of year unobstructed by the exuberant foliage of the trees and the throngs of people taking their turn at being photographed on the one of the bridges crossing this most picturesque of canals.

At the end of the canal, we emerged onto a busy street, which we needed to cross. Here, there was another distraction in the form of a second-hand clothing shop where I confess to having made another purchase.

Consulting our map to make sure we were on the right track, we rounded a corner and found ourselves in a quiet, back-of-beyond street, where time seemed to have come to a halt. 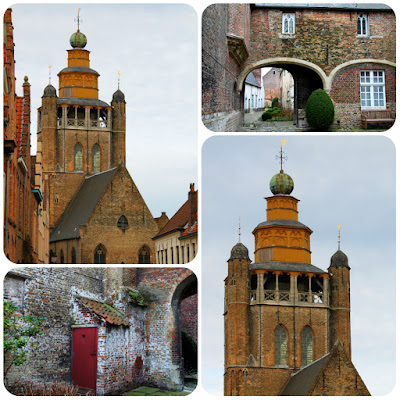 On and on we walked, with side turnings offering a glimpse of a wide canal running parallel to the street we were walking on.

Then, after a bend in the street, we could finally spot the eye-catching tower of the Jerusalem Chapel. Modelled after Jerusalem's Holy Sepulchre, it is topped by the cross of Jerusalem, in its turn placed on top of a sphere representing the world.

The chapel is part of  the Adornes domain, an authentic medieval estate comprising a mansion and almshouses, where you can step into the world of one of the most prominent families of 15th Century Bruges. 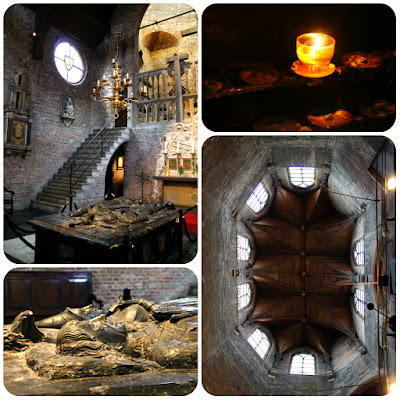 The Adornes family originates from the Italian city of Genoa, but came to Flanders in the 13th Century.

Its best-known descendant is Anselm Adornes, who became an influential businessman, diplomat and knight in the 15th Century, when the estate was built. The chapel was consecrated in 1429

Anselm Adornes and his wife, Margareta van der Banck, are buried in the black marble tomb in the chapel, although in the case of Anselm Adornes, it is supposedly only his heart which is enshrined here, as these are the only remains that were able to be returned to Bruges after he was murdered in Scotland in 1483. 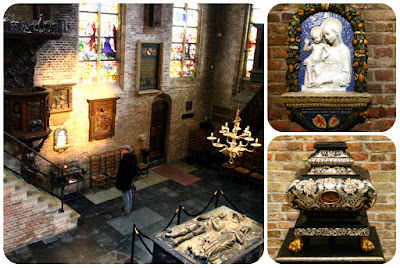 The architecture and layout of the chapel and its extraordinary relics are illustrations of the great reverence of the Adornes family for Jerusalem.

It is, in fact, quite a macabre monument, with a gruesome altarpiece covered in skull motifs, as well as a rather creepy effigy of Christ’s corpse tucked away inside a miniature, low-ceilinged chapel at the rear. 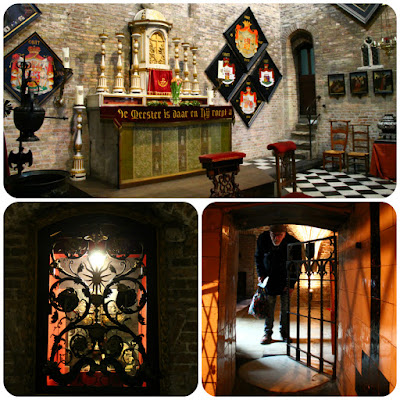 The estate is still owned by the family today, which makes it quite exceptional.

The family has always been very hospitable and the current descendants, who opened the domain to the public, are delighted to continue this tradition. 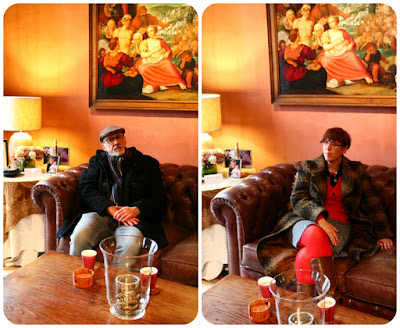 You can have coffee or tea and cakes in the so-called Scottish Lounge, a cosy room where you can rest your wary feet and reflect on your visit. Payment of any refreshments is by way of an honesty box. 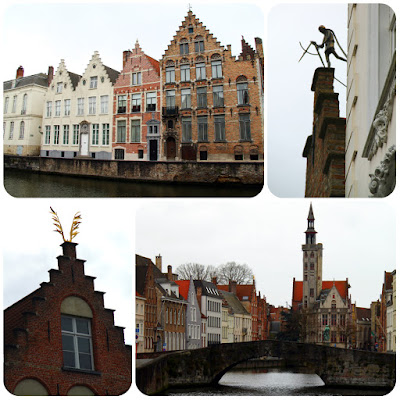 It was well after 3 pm when we were finally able to tear ourselves away from those comfortable chesterfields, by which time a blanket of grey had done away with the blue skies which had accompanied us earlier that day.

Without the sun to aid their reflection, the monumental merchants' houses lining the Hansa Quarter's wide canals, seemed to be gazing out forlornly at their counterparts across the steel grey water.

It started raining lightly, and as we'd rather optimistically set out without our umbrellas, we thought it was time to call it a day. But not before ducking into a shop on our way back to the car park to purchase some prepared sandwiches for our evening meal, which we would have at our B&B. 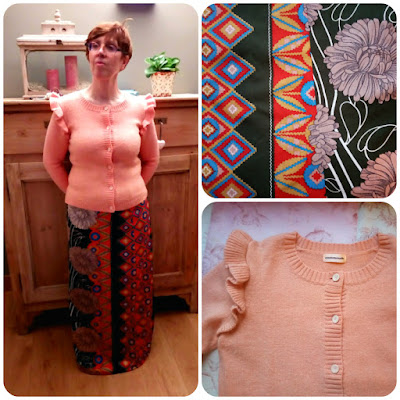 Again, our way home was a lengthy one, courtesy of our satnav. Although we'd given her clear instructions before leaving the car park, the lack of satellite reception underground seemed to completely confuse her when we surfaced. Enough said!

I'm ending this post by showing you my purchases as promised. The Swiss made maxi skirt came from Think Twice, while the second hand shop we passed along the way to the Jerusalem chapel provided the salmon pink cardigan. I'd already taken off my make-up and Jos omitted to tell me that my hair was sticking up, so just look at the clothes please!