It was Sunday the 12th of January and I was sulking a bit. Not just because yet another weekend was almost over, it had also, yet again, been a particularly wet one. On top of that, the week ahead promised to be a stressful one, as my bosses would be visiting from Miami. Admittedly, they are the two nicest guys ever, but still, a visit from them tends to disrupt my usual office routine just a little. 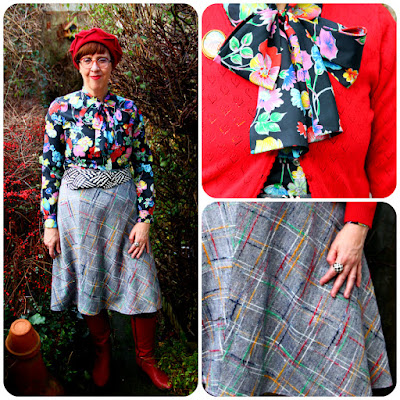 I knew I would be too exhausted after work to assemble outfits for the next day, so I did some prepping by assembling a couple of tried and tested feel-good ones. Surely, a favourite skirt and blouse combo would do the trick?

The grey wool skirt criss-crossed by yellow, red, green, black and white diagonals creating a kind of plaid pattern, has been a long-time inhabitant of my wardrobe. Its colours, plus a dash of pinks and blues, are repeated in the black floral pussy-bow blouse. Admittedly, it has become a big snug across the chest area, but as any gaping is covered by the floppy bow, it isn't going anywhere soon. Besides, when Face Timing with the girls at the Miami office on the day I was wearing it, they all exclaimed over it, which kind of clinched the deal. 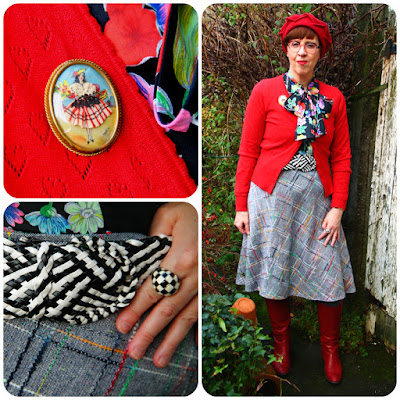 I wore my red boots and my recently charity shopped red King Louie cardigan. The brooch I pinned to it was a flea market find, the lady captured inside wearing a skirt and blouse made of tiny scraps of fabric.

The black and white woven belt tied the skirt and blouse together perfectly and while scouring my stash of rings for a possible contender, I happened upon this black and white checkered metal one.

When I posted the above collage in Instagram, Nancy remarked that the ring reminded her of ska, or rather, 2 Tone, the record label created by The Specials's Jerry Dammers back in 1979. 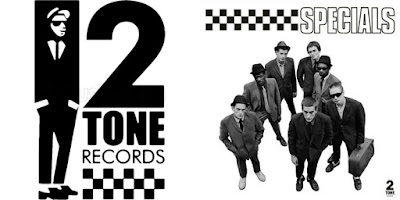 The label went on not just to sign The Specials themselves (their "Gangsters" is one of my all-time favourite songs), but also Madness, The Selecter and The Beat. I loved the combination of ska, reggae, punk and new wave and fashion-wise I remember spending my meagre pocket money on a black and white checkered belt I'd fallen in love with at the time. 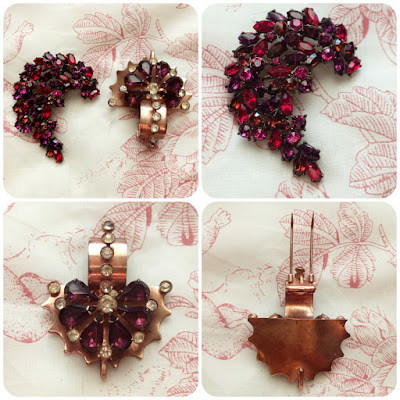 Let me introduce you to these two fabulous new additions to my brooch collection. I'm sure you'll be astounded to hear that they were a present from my bosses, who bought them for me from an antiques market at Miami's South Beach.

The one with the cluster of purple stones is Ben Amun, and reasonably modern, while the other one, with its lethal looking two pronged clasp is a fur clip dating from the 1930s or thereabouts. 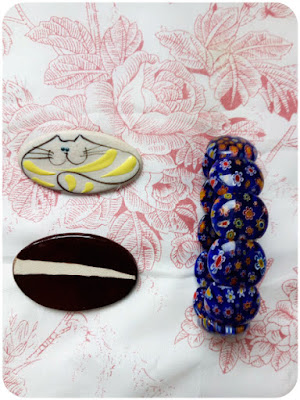 And while we're on the subject of jewellery, why not take the opportunity to show you the charity shop finds I forgot to mention in my previous post.  The top brooch, a cat painted on a flat stone, was just € 0,10, while the ceramic brown and cream brooch and the bracelet with its glass Millefiori beads, were € 1,50 each. I've already got the bracelet in a red and a light blue version. 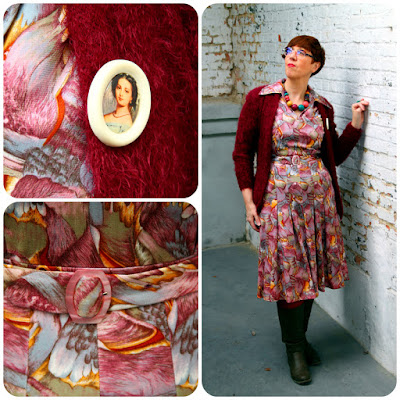 As expected, the week turned out to be quite manic, but nevertheless the days sped by like a train and before I knew we'd reached the last carriage and another weekend rolled along.

What's more, the seemingly endless succession of grey rainy days had given way to some bright but crisply cold winter days for a change.

The thick wool-blend dress with its vibrant watercolour print was the perfect choice for the colder temperatures we were having. I love the dropped pleats and its self-fabric belt with its pink plastic buckle. All of these were selling points when I came across it in a charity shops many years ago. The fluffy maroon cardigan I charity shopped during the holidays made another appearance, already proving its worth as a wardrobe workhorse. I added an off-white oval "lady brooch", which is another stalwart. The wooden beads are an old retail buy, but I can't remember where they came from. I have them in another colourway as well. 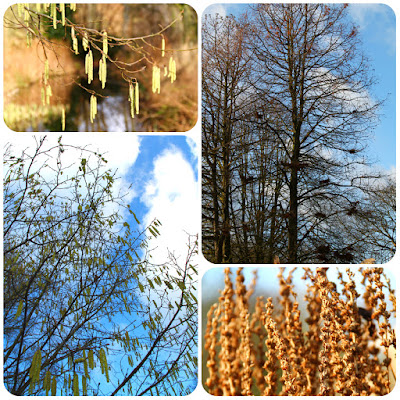 Those of you who have been reading my ramblings for a while know that our Saturdays are usually spent trawling one or two charity shops. That Saturday one of shops we'd decided to grace with a visit was the one in the neighbouring town of Duffel. 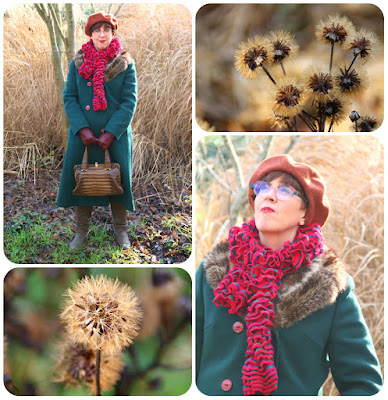 As we were parking our car opposite the town's enchanting park, we thought we'd better make the most of the gorgeous weather and go for a walk before hitting the shop.

The sky was such a vivid shade of blue and the warmth of the sun on our faces could have fooled us into believing it was almost Spring. It certainly fooled some of the trees, as one of them was already bearing catkins galore. Juxtaposed with these early signs of Spring were the remnants of Autumn's seed-heads, a mid-winter conglomeration of seasons. 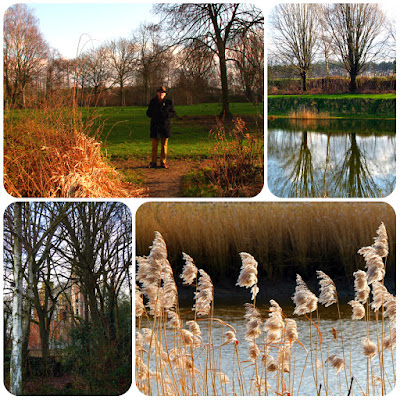 At the far end, the park seamlessly meets the grounds of a castle ruin, which we decided would be our walk's destination.

Skirting a pond, its surface a mirror for the trees to preen themselves in, we caught our first glimpse of the castle, the tangle of trees all but hiding it from view, so that it reminded me of Sleeping Beauty's castle. 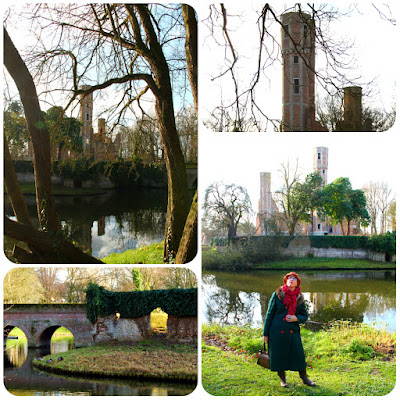 Consulting my blog, I was quite shocked to learn that the last time we were here was over two years ago! As the castle's turrets seemed to be leaning ever more precariously with each visit, the ruin falling more and more into ruin, so to speak, we were a bit fearful of what we would find.

Getting closer, though, we could see that fortifications had finally been put up inside the castle's empty shell, so that at least the walls are safe from toppling over in the next storm. 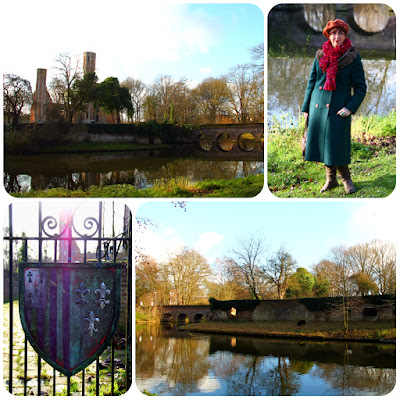 Doing some research, I have read that plans are afoot to restore what's left of the evocative castle which, having its origins in the 12th Century, is one of the oldest buildings in the Province of Antwerp. 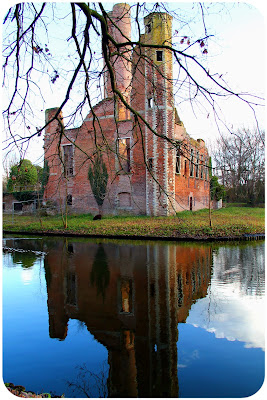 And about time I should think, as even if the building has been protected since 1973, the town of Duffel has left it to deteriorate in such a way that for safety reasons, its curlicued gates with its now mossy coat of arms, were finally closed to the public in 2013.

I remember going to a flea market held near the castle well before that time, and a brass band playing in the castle's forecourt, the band leader's stage banter having us in stitches as we trawled the market stalls on a hot Summer's day. 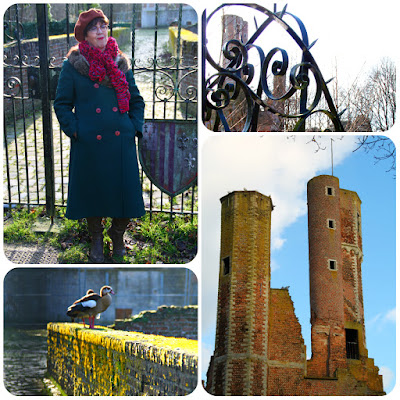 The castle is home to the park's many birds and waterfowl, who seek shelter inside its walls. Apparently, they have now been joined by two black woolly sheep who have been employed to graze the castle's grassy borders. 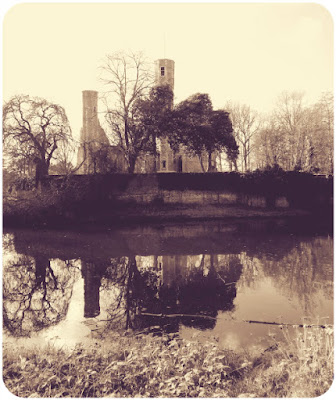 I'm including this moody shot of the castle ruins reflected in the moat. Taken with my phone's quite inadequate camera and given a sepia filter, it was much admired on Instagram. 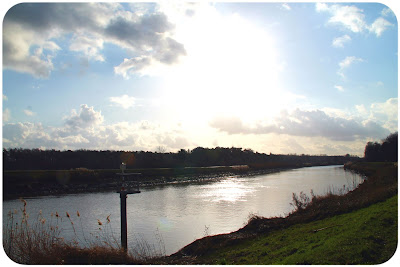 After a final glance and a wave goodbye, we turned our backs to the castle, and made our way back to the main part of the park along the adjacent river's towpath.

And we did visit that charity shop after all, even if we found nothing worth mentioning. We didn't mind very much, as our walk to the castle had been worth driving all that way. Besides, we had a flea market to go to on Sunday. But that will be for my next post!