Scenes from the bleak midwinter

On the last Sunday of 2019 we embarked on our final walk of the year.

Admittedly, apart from the odd stroll in the park, we hadn't been on a good old ramble for quite a while. Time and tide had been against us, not to mention that eternal spoilsport, the weather.

At the end of a string of wet weeks, that weekend's forecast had been for reasonably dry and sunny weather accompanied by - shock, horror! - some light overnight frost. Had the weather gods finally cottoned on that it's Winter in these parts? 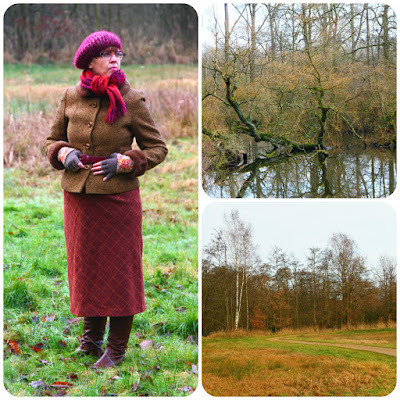 In any case, that Sunday morning we wasted no time in going for that long overdue walk, choosing  one of our favourite nature reserves, Blaasveldbroek, as our destination.

The reserve is about 20 kilometers from where we live and, with its 675 hectares and a choice of foothpaths, it's the perfect place to stretch one's legs. My long-time readers have accompanied me there more than once over the years.

So, after breakfast we dressed warmly to combat the barely above freezing temparatures, donning coats, hats, scarves and gloves, and packed some sandwiches and a thermos flask for a wintertime picnic. 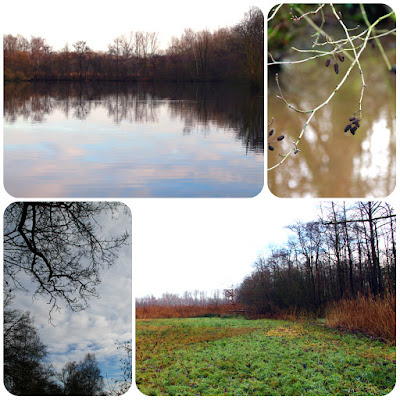 The day did have a bit of a cloudy start and a lingering haze initially put paid to the sun's attempts to grace us with her presence.

Once or twice, patches of blue appeared in which fleecy clouds seemed to huddle together for warmth. 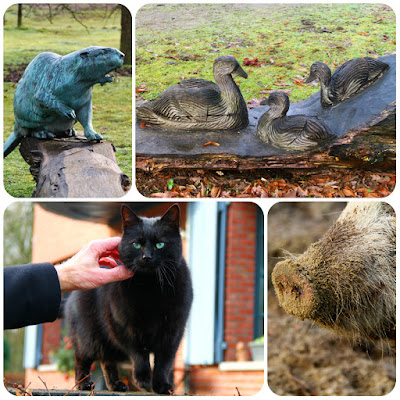 There's fauna and flora in abundance, too! Speaking of the former, arriving at the visitor's centre, which lies at the heart of the reserve, we were met by the resident cat, a Phoebe lookalike, albeit quite a bit slimmer and friendlier than our grumpy monster.

There were two big grey hairy pigs in a fenced off area which they were in the process of digging over completely with their snouts, in search of who knows what. However, they didn't keep still for a single moment, so that I was only able to catch one of their mud encrusted snouts on camera.

The fearsome but funny bronze beaver (one of a pair) and the enchanting carved wooden ducks probably need no introduction as they have appeared on the blog several times before. 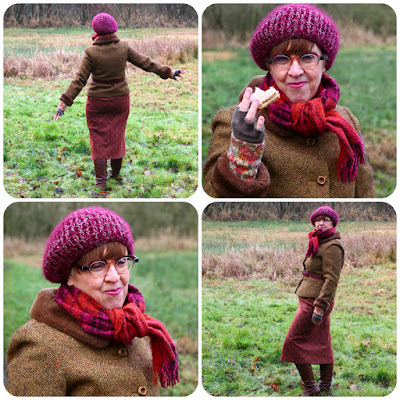 You've already seen most of what I was wearing that day in my previous post, but I still had to show you my outerwear.

The jacket, in a mustardy brown and with furry collar and cuffs, is part of a skirt suit. I've gone off the skirt, but the jacket is still making an appearance each winter. I usually wear the boxy jacket with a belt, this time opting for a burgundy leather one. My ears were kept toasty by my woolly beret from Think Twice and I added a charity shopped scarf in oranges and pinks. 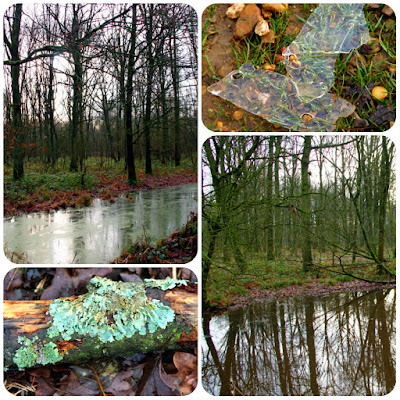 This marshy reserve really is a place for all seasons, and I am definitely an all-seasons girl, finding delight even in the so-called bleak midwinter: the solemn trees reflected in the swollen waters, the thin shards of ice escaped from a puddle, a dead branch giving life to mosses and lichens. 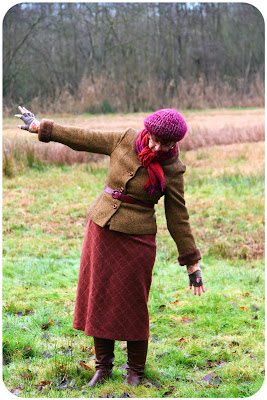 We always stop for photographs in this marshy meadow, even if this time we had to stay close to its edge as the rains had made it quite inaccessible unless one was wearing wellies.

In spite of the cold, I had no need for the pair of leather gloves I'd brought, making do with my fingerless knitted ones, which are far more convenient anyway for a constant photographer like me. 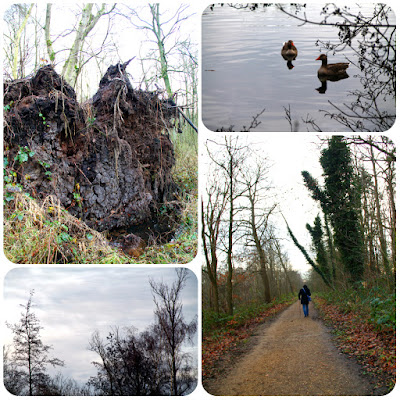 The mottled blanket of clouds was getting denser, the skeleton trees shadow-playing against the gloomy sky. Gentle giants, they are, but even gentle giants do not live forever, victims of old age and fierce winter storms. 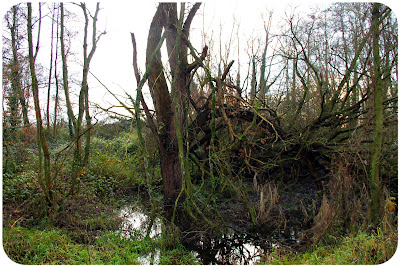 Near the end of our walk, just before the turning to the muddy car park, a half-drowned landscape awaited, a graveyard of gentle giants.

Giddy and light-headed from fresh unsullied air, we returned to our car, and drove back home, happier in our skins than we were before. 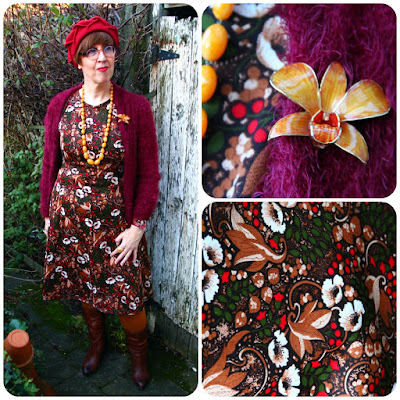 And so the final days of the year were upon us, leaving me with a final handful of outfits to share.

First up is what I wore on Monday, to run some errands in our town. But laid back days like these are no reason for me not to get dressed up, so out came this charity shopped frock, handmade and with a seasonal print featuring flowers, leaves and berries, in brown, green, red and white. 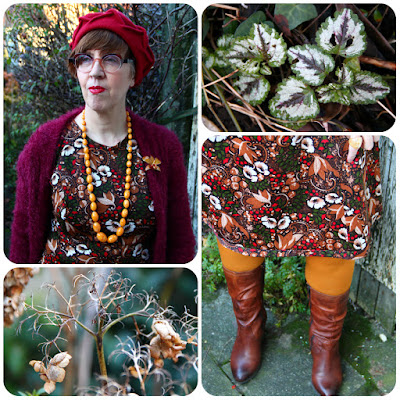 The furry maroon cardigan is one of the three I scored at the charity shops just days before, and shown in my previous post.

I picked golden yellows for my opaques, beaded necklace and orchid brooch. The brooch can also be worn as a pendant and was a flea market find. 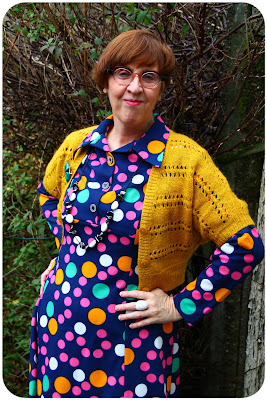 I opted for full-on colour on New Year's Eve, starting with my dotty Diolen frock from Think Twice, matching the ochre dots with my short-sleeved batwing cardigan.

The cardie is H&M by way of the charity shops a year or two ago. The long, black and white beaded necklace was another recent charity shop buy, while the green flower brooch - almost exactly the shade of the green dots - was a flea market find. 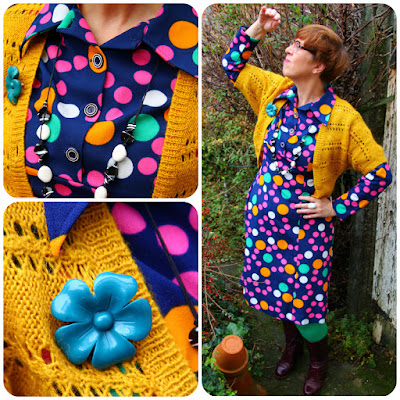 And now, for the grand finale, I'm introducing you to the outfit I wore to wave goodbye to the old year and welcome the new.

I was determined to wear this glorious Scandi print maxi skirt but initially didn't have the faintest idea what to wear with it. Then I remembered the vintage jumper and blouse in one which I picked up for just € 1 from Think Twice a month or two ago, but promptly forgot about. 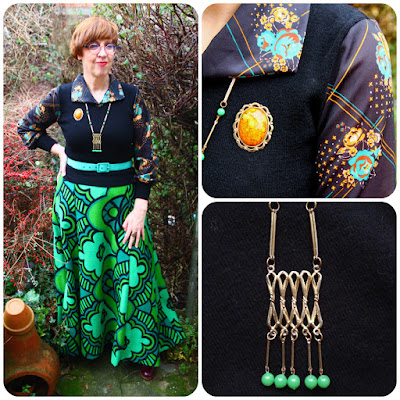 It was short enough to wear untucked but I thought it benefited from the addition of a belt, choosing a fabric covered one which I think once belonged to a dress.

The brooch with its mottled ochre and green stone was yet another flea market find. One of my favourites, I chose it to enhance the yellow bits in the blouse's sleeves and collar. 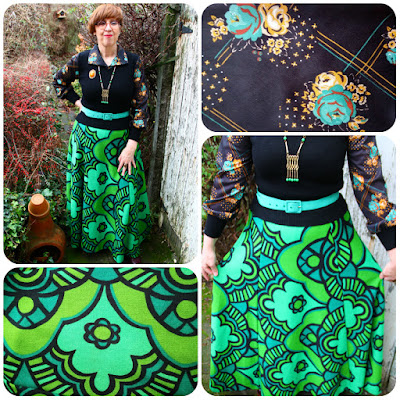 The final touch was my Art Deco style necklace, one of my best charity shop jewellery finds ever.

And so, that was it, 2019 all wrapped up and put away in a drawer. And about time, I should think, as we are - eek!- mid January already!