Still the days seem the same

For fear of sounding like a broken record, the rainy weather continued to plague us, marring not only the first weekend of October, but the ensuing week as well.

Taking Friday afternoon off meant that the weekend started early, which made me feel a whole lot better. As did wearing one of my brightest, long-sleeved frocks. 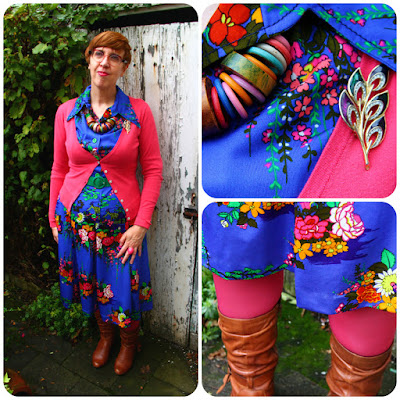 With a flower pattern in about every colour under the sun, the odd pagoda nestling among them, this cobalt blue dress isn't for the faint-hearted.

From its rich colour palette, I picked bright pink for a further pop of colour in the form of my cardi and opaques. My first wearing of opaques this season!

Not wanting my outfit to be too matchy-matchy, I added a green vinyl belt, a necklace of multi-coloured wooden discs bought from Accessorize eons ago, and the peacock brooch I found in a charity shop in Llangollen last Summer. 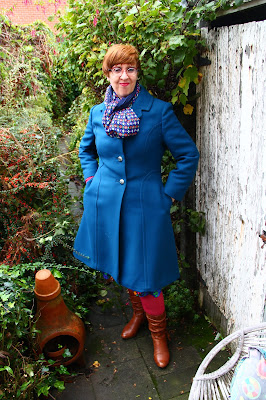 It was chilly enough to wear one of my all-time favourite coats too: I'm always glad to see this vintage teal wonder again after a six-month absence.

We were off to the optician’s for a second pair of glasses for Jos.  His last purchase back in July came with the offer of one free lens if he bought a second pair within three months. As he obviously wanted to make use of this offer, he'd asked me to help him choose new frames. As it was, we both fell for the first frames he tried on, so that we had enough time to spare for a visit to the local charity shop. 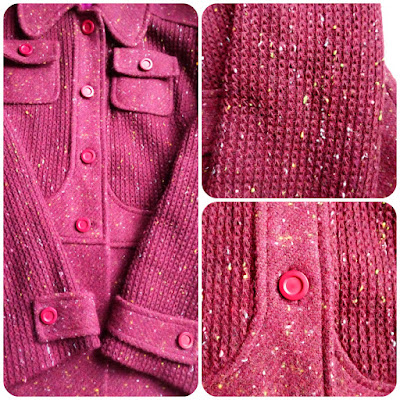 Trawling the clothing aisles and doing my best not to look at the coats, which are a particular weakness of mine, I couldn’t help but notice this burgundy jacket. Its slightly longer length, the multi-coloured specks running through the fabric and the unusual knitted sleeves and yoke all conspired against me. My only hope was that it wouldn’t fit me, but no: it was just perfect in every way. At € 6, there was no way it wasn’t coming home with me! Oh, and it's a wool and polyacryl blend. 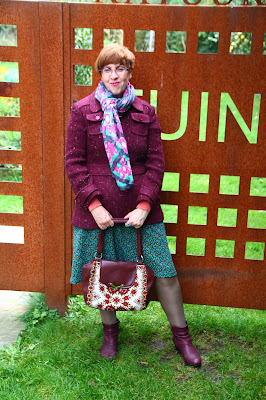 On Saturday, we bit the bullet and booked an airbnb cottage for our next little holiday in November.

Then we were off for another charity shop jaunt, with me wearing the jacket, obviously. In fact, I wore it all week, so that its cost per wear has now dropped below € 1.

But first we stopped at the fashionably rusty gates of the museum garden further along in our street for some outfit photos. We had to act fast, as not only had it ceased raining for a couple of minutes, there were some weak and sickly rays of sunshine about. 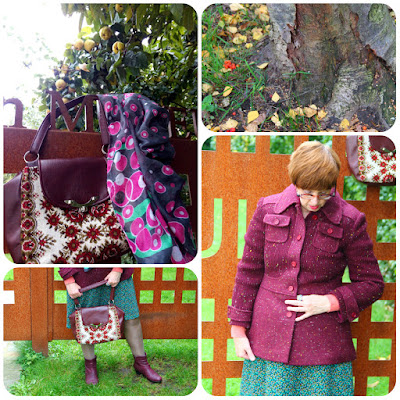 My ankle boots - one of the oldest pairs I've got, and repaired several times already - as well as my handbag matched the jacket almost exactly. 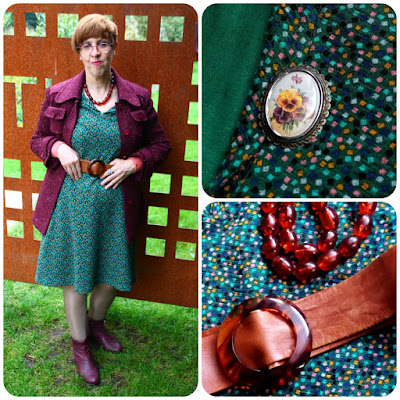 The dress I'm wearing underneath, in what feels like a wool/polyester blend, is short-sleeved and one of the two items I found at Think Twice in Bruges on our day-trip the week before.

I accessorized it with a tan belt with a round tortoiseshell buckle and amber coloured beads. The brooch, with its posy of violets, came from a stall in Cardigan Market, bought on our last Pembrokeshire holiday in 2017. 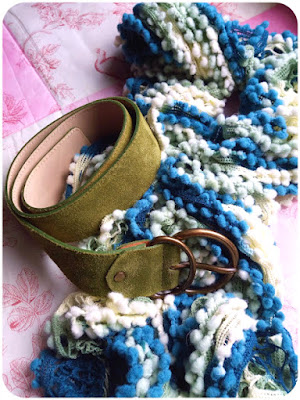 If lately the weather gods have been behaving badly, those ruling the charity shops have been more than making up for it.

The first shop we visited has been a bit rubbish lately, but I still came away with a moss green suede belt and a funky scarf, which I'll be wearing to combat the first Autumn chills. 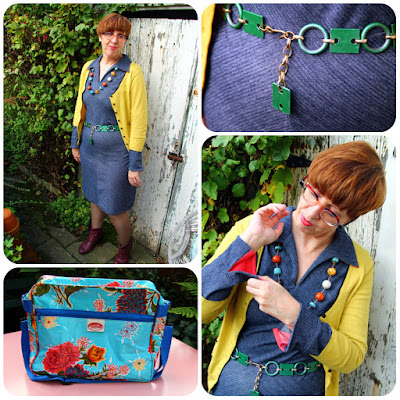 The second shop yielded a good-as-new Kitsch Kitchen bag (bottom left), whilst the third shop provided me with a completely outfit, consisting of a dress by the defunct Belgian label Wow To Go, a yellow Mango cardi and a green wood and gold metal chain belt.

I had been sniffling and sneezing on and off throughout the day, so it was almost inevitable that on  Sunday I woke up to blocked sinuses, watery eyes and a head full of cotton wool, making it clear that I'd caught some kind of bug. 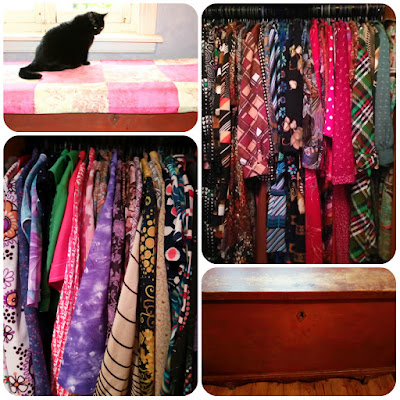 This did not deter me from carrying out my plans for that day, which were to make a start with my seasonal wardrobe change-over.

Ideally, I'd love to keep all my clothes out all year round, but lack of space dictates that most of my out-of-season frocks and skirts are stored inside this huge antique linen chest which used to belong to Jos's grandparents.

I am, however, only swapping over those things which need hanging space, which is at a premium. Apart from chunky jumpers and thick woollen skirts, which have their permanent home inside the chest, only coming out during severe cold snaps, and a suitcase full of flimsy heatwave clothes, everything else stays put throughout the year. 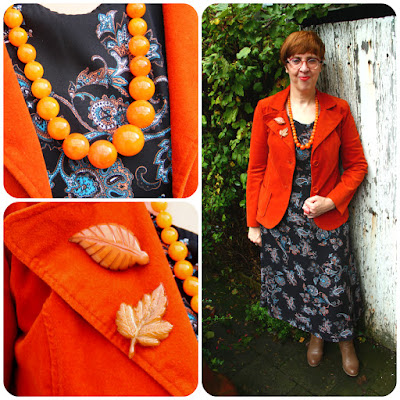 I was starting to feel quite miserable by late afternoon, but as the sun came out for literally 5 minutes, I threw on my orange velvet jacket, put on a pair of ankle boots, and went into the garden for some outfit photos.

The midi dress is from a Belgian high street brand, but found at a a charity shop last Autumn. I needed something stylish yet comfortable to help me with the task at hand.

I paid a bit more than I was initially prepared to for the jacket when it crossed my path in a charity shop back in April, but in the end I was glad I did, as isn't that colour absolutely gorgeous?

As a further nod to the season, I added a duo of Autumn leaves to its rich pumpkin shade. The final touch was provided by a strand of orange plastic beads. 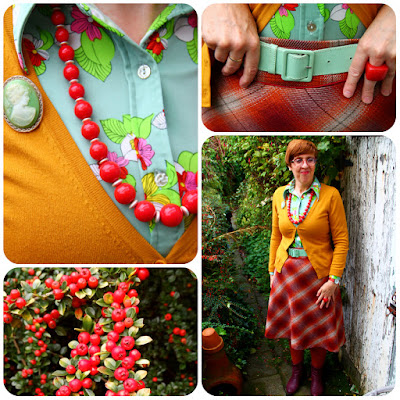 My cold, which turned out to be a full-blown one, continued to bug me all week and, even though I did my best to not to let it bring me down, the broken nights followed by days of rainy commutes, finally took their toll.  By Thursday - typically the only day that the sun was out - I was feeling so exhausted that - shock! horror! - I left work early, which is practically unheard of for me.

My wardrobe was the best medicine to help me through the week, so here are some of the outfits I wore. I'm so glad I've been keeping a record to distinguish one day from another.

First up was this rust coloured plaid skirt. Originally from H&M, it was a charity shop find several years ago. The pale green floral print blouse was the second item I bought from Think Twice in Bruges. See how my belt matches its colour almost exactly!  Further additions to my outfit were a red beaded necklace, my ochre yellow cardi to which I pinned a green-backed cameo brooch, burnt orange tights and burgundy ankle boots. 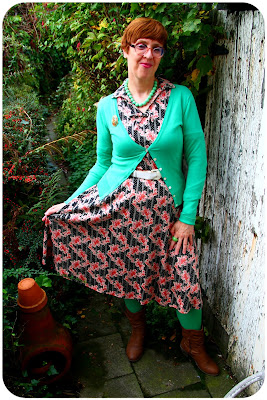 I'd sort of gone off this dress, bought from a long-gone vintage shop, but decided to give it another go. Instead of wearing it with pink shades, as I used to do in the past, I now opted for green and, lo and behold, I'm in love with it again! 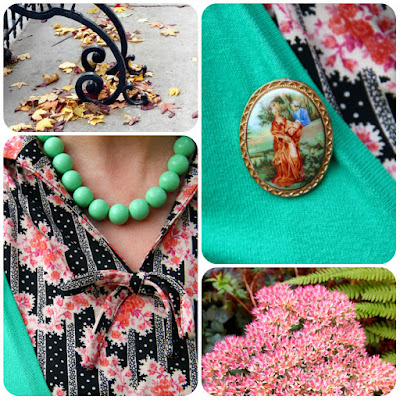 Here you can see a close-up of the dress's riotous pattern, which has vertical stripes with a squiggly print, tiny dots and patches of roses. And look, it's got a little bow at the neckline as well!

Well, that's it for now.

Here's to hoping that these rainy days soon come to an end, as I'm in desperate need of some of that glorious, leaf-kicking Autumn weather!

Once again, I am linking to lovely Nancy's Fancy Friday!
Posted by Polyester Princess at 19:35