The city sun sets over me

When eventually it stopped raining, I breathed a huge sigh of relief. As we were in the run-up to Winter, this could of course only mean one thing: we were in for a - minor - cold snap. But that's OK, I can live with that as long as blue skies and a bit of sunshine are part of the bargain.

The downside was that all this happened during the week before last, when I was cooped up in the office. Oh well, at least I got to enjoy some spectacular sunsets from my perch on the 5th floor. 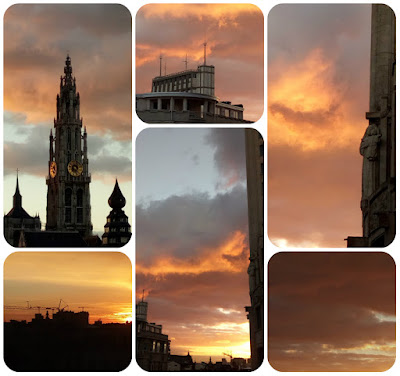 I took these photos with my phone and they were not enhanced in any way. The sky really was this amazing fiery mix of tangerines and pinks, with a pinch of darkest indigo thrown in.

The city does look rather lovely, doesn't she? Well, she does, as long as you keep your eyes focused on the skyscape and don't let them wander down to street level, where hordes of frenzied shoppers are hunting for presents beneath the merrily twinkling Christmas lights.

Not for me, no thank you! Working in the city centre at this time of year really is the Nightmare before Christmas! 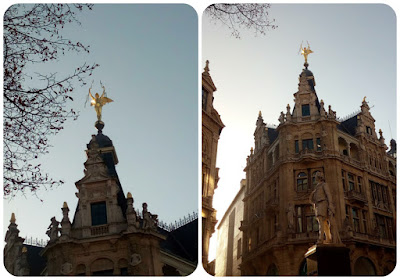 One day, when the weather was really exceptional, I even braved the crowds and walked.

I was almost swept up in a tide of shoppers when I took these photographs of Electra. Standing on top of a building which houses a well-known department store, she seemed to be casting a spell on us, mere mortals. She was being wooed by Anthony Van Dyck, who was making eyes at her from his plinth below. Clearly not impressed, she promptly turned him to stone! 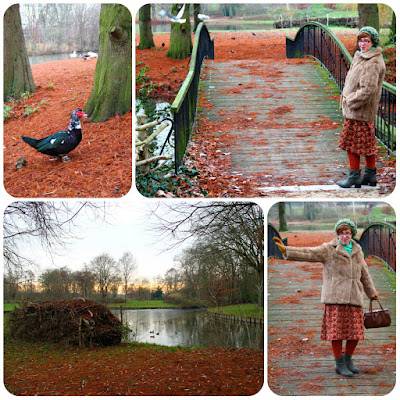 Grey clouds reigned again on Friday. As public transport was seriously disrupted by a general strike, I was obliged to take the day off. Not that I minded very much!

It must have been no later than 2.30 pm and daylight was fading already. However, we made the most of what was remaining by going for a long overdue walk in the park.

Wearing my fake fur coat, which I'd unearthed from its out of season hiding place that morning, I was well prepared for the cold. 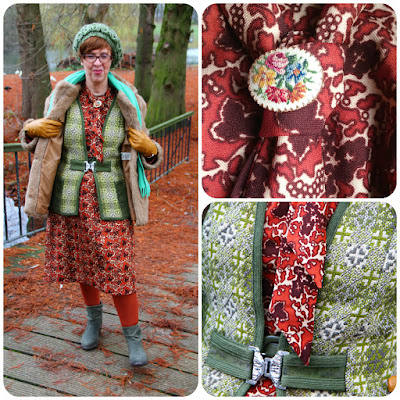 Beneath my coat, I wore a crazily patterned, reddish brown handmade vintage dress, its tie secured by a tapestry brooch.The brooch was found at a flea market many months ago. As its fastening was broken, it had been patiently waiting its turn with the other waifs and strays in brooch hospital, for Dr. Jos to mend it.

The sleeveless Welsh wool jacket I've added on top was a present from my lovely friend Vix.

I didn't want my legs to be turned into icy pillars, so I wore a pair of nude tights underneath my burnt orange opaques. My green booties from Middelburg were cozy and comfortable. 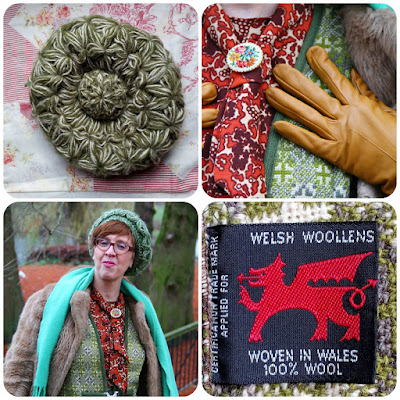 I'd quickly grabbed this scarf in my haste to leave the house, but it wasn't nearly warm enough. Same goes for the green knitted hat with its chunky pompom. It does look deceptively warm, but it's a rather loose knit, plus it kept escaping from my ears, leaving them exposed to the icy elements.

The mustard leather gloves did do the trick, even though I had to keep removing them in order to make photographs. Should have worn my fingerless gloves! 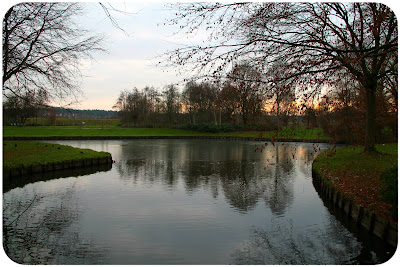 In the fading light, the trees are blackish-green silhouettes.

I wonder, are they sleeping, their roots buried deeply in the cold, cold ground? And if they do, are they dreaming of Spring? 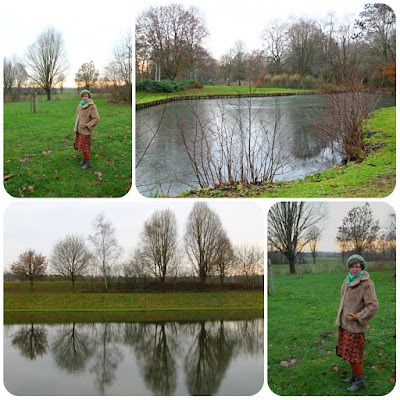 Some of the ponds were covered with a flimsy layer of opalescent frost, while others were flat as squeaky clean mirrors, silently reflecting a motley crew of skeleton trees. In Flanders parks the poppies blow ...

The bare branches of this lonely little tree were hung with bright red laminated poppies, clearly the result of a primary school project, their messages proclaiming that "war has to stop and peace must come". 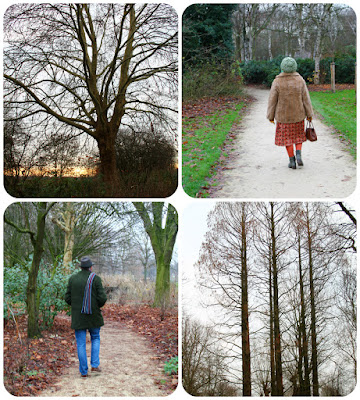 Saturday was another dry, yet bitterly cold day. I briefly braved the cold to show you what I was wearing that morning. This is yet another one of my dresses with a self-tie but, although I like the colour and print, I'm on the fence about it, as I just can't seem to style it right.

It's mainly the unwieldy tie which is the culprit! In a bid to make it behave, I added a floral scarf clip. I also wore moss green opaques, a lilac cardigan and a purple beret.

I only wore the dress in the morning, changing into jeans and a polo neck after lunch. Yes, you've read that right and no, I don't have pictures! 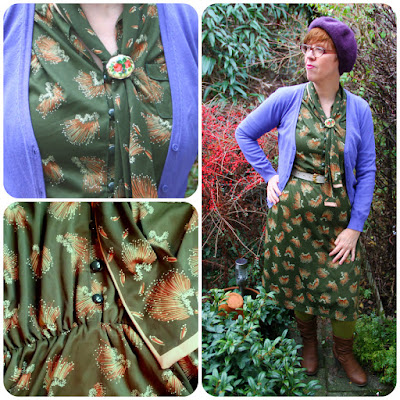 The reason I was wearing such an uncharacteristic outfit is that for the last month or so, we have been dedicating part of our weekends to clearing my parental home.

We'd made a start two years ago, just after my Dad passed away, but stopped when my brother temporarily moved into the house. This temporary situation turned into two years, but now that he's moved out, we can finally finish what we started.

Oh, the stuff my parents kept!  They hardly threw anything away. Consequently, we filled bin bag after bin bag of rubbish, while many carloads of stuff have gone to the charity shops and the recycling centre. 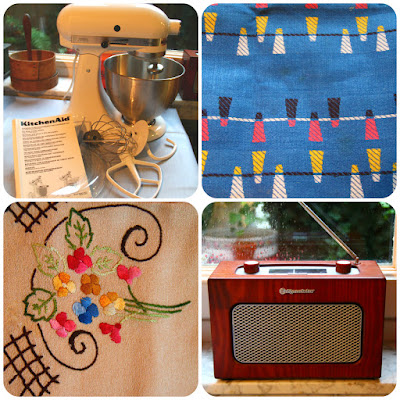 It was unavoidable that some things ended up at Dove Cottage too, ranging from practical items to those of sentimental value.

Bags of household linen, some of it yellowed with age, were given the charity, but I just couldn't bear to part with the tablecloths on the top right and bottom left. 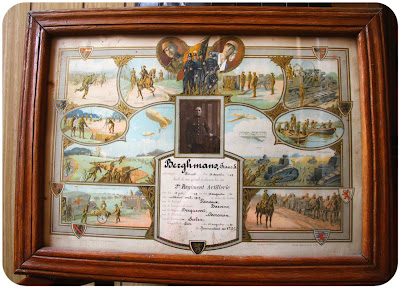 The framed document above, dating from 1930, was presented to my paternal granddad after he finished his military service. I'm sure we will find a bit of wall to hang it up! 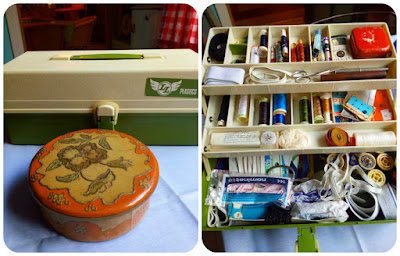 Sorting out my Mum's sewing box and the vintage tin, both full of sewing materials, provided hours of fun on a rainy afternoon. 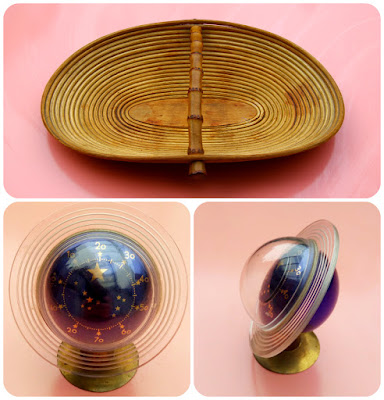 I suspect that the 1950s fruit bowl and Space Age thermometer were both given to my parents as wedding presents. As long as I can remember, they lived side by side on top of our living room sideboard.

Both were covered with a layer of dust by now, but were given a good clean and a new lease of life at Dove Cottage, where they are getting the love these heirlooms deserve.

Last but not least! While clearing out the attic, we stumbled upon a rickety wardrobe, its contents a big question mark as its key had been lost.

When Jos finally managed to open it, there it was, my Mum's coat! 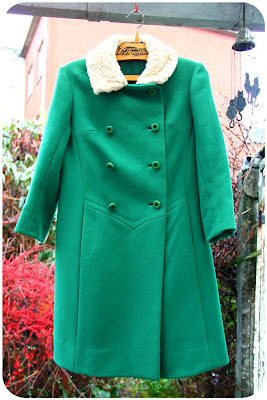 Not only had I forgotten all about it, I never even suspected that it was still around. Clearly it was waiting for me. I mean, look at that colour! And what's more, it's a perfect fit!

My Mum must have had it custom made back in the 1960s and now that I set eyes on it again, I actually remember her wearing it.

I did choke up a bit when I first tried it on, and there might have been a few tiny tears ...

I simply had to wear it to the flea market on Sunday. But that'll be for a next post!

Meanwhile, I'm joining the other girls at Nancy's Fancy Friday. I'm also joining Patti and the gang as usual at Patti's Visible Monday!