It's pretty scary how time is racing by! One minute I'm in my parents' attic, staring in disbelief at my Mum's green coat, and before you know it we're more than one week later, with this year's Christmas a thing of the past. How did that happen?

I've been meaning to tell you about the flea market we went to on the Sunday before last, but I've been procrastinating again. No, that's not strictly true. As I've finally got some time off, I have been enjoying these rare leisurely days, living life at a slower and more spontaneous pace than the manic hamster wheel madness that so determines my working life. 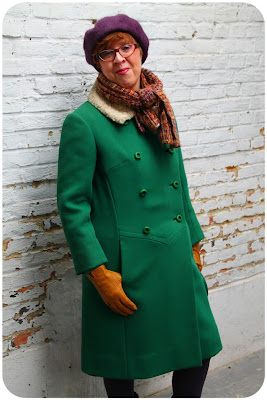 But let's get back to that flea market, which was our last one this year. As I'd already hinted in my last post, I just had to wear my Mum's green coat.

There, you see, a perfect fit!

I wonder, was its colour dictated by fashion? Was it my Mum's first choice or did the seamstress lead her gently into its direction? I'll never know. Come to think of it, I don't even remember which was my Mum's favourite colour, but I'm pretty certain that it wasn't green. 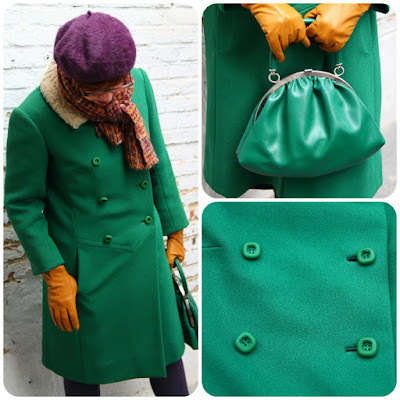 For its first wear by me, I chose mustard and purple as its companions. They seemed to get along rather well. How peculiar that my handbag is in the exact same shade of green.

And look at those buttons!

I also love its furry collar, which can even be put up and fastened with a hook and eye closure, making it perfect for those colder, windswept days.

Here's a look at the pristine green lining, edged with decorative, braided binding. 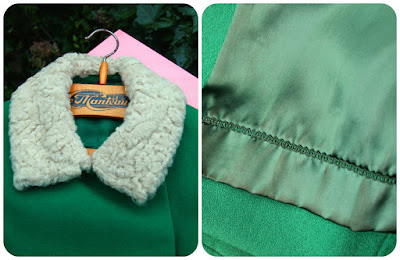 Underneath the coat, I was wearing a 1980s shift dress with a mad green, pink, purple and turquoise print, accessorized with a green beaded necklace. The brooch I pinned to my sage green cardigan looks like a little wreath of pearls. A Christmas wreath, perhaps? I do wear it at any time of year, though. 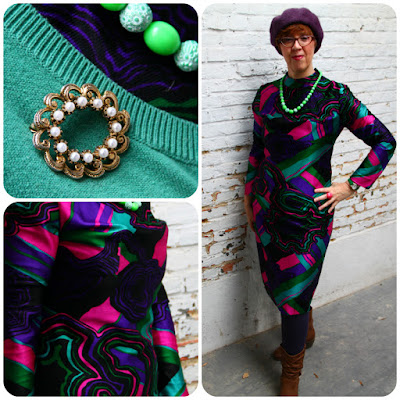 There was quite a turnout of stalls at the flea market, but strangely enough it wasn't very busy. We were told there had been more visitors on Saturday but, with most of the city centre shops being open in the run-up to Christmas this particular Sunday, I guess that would have been where most people preferred to spend their hard-earned money hunting for presents. 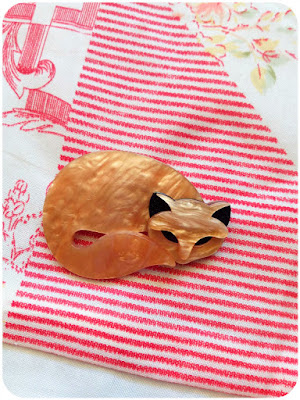 Such a shame, as there was certainly something to cater for all tastes and budgets here ...

We were both feeling a bit tired and were quite overwhelmed by all the choice! Consequently, I only bought one brooch. Not a vintage one this time, but I simply couldn't resist this gorgeous large cat brooch. 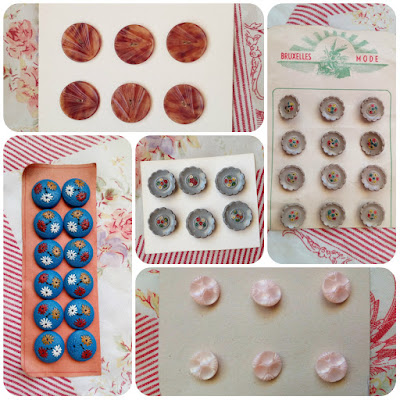 There was a lady selling boxes full of vintage buttons at very economical prices, which I spend some time poring over. These are the ones I've added to my collection. 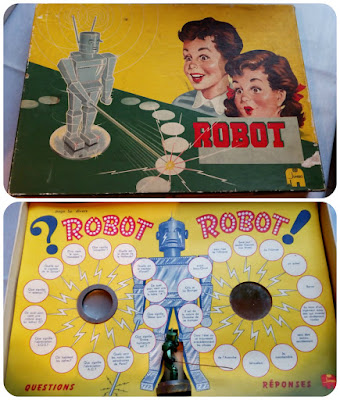 Jos pounced on this 1950s robot game, which he'd coveted, but never got, as a child. The game includes a small robot figure holding a pointer. It is placed in the centre of a circular pattern of questions. The robot is rotated to a particular question and then lifted from the question area and placed in the centre of the answer area where it automatically rotates to the correct answer. 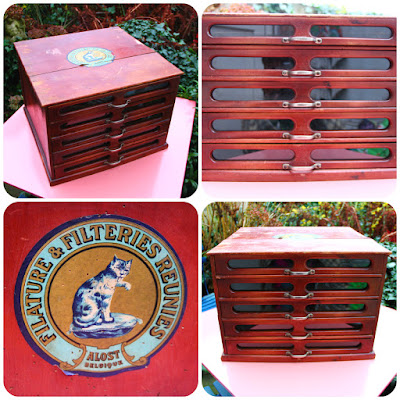 We'd only reached the end of the first aisle when we made our biggest purchase: a small, antique chest of wooden, glass-fronted drawers, the kind which was used to display sewing threads in haberdashery shops. This particular one is from a Belgian company called Filature & Filteries Reunies, which were based in the town of Aalst, or Alost in French. They were in business from 1886 until about 1970.

I'd been looking for something similar, but the only ones I'd come across so far were eye-wateringly expensive. As its top is cracked, this one was affordable, and what's more, the seller even gave us a reduction.

What was I going to use it for? I think those of you who have been reading my blog for a while will be able to make an educated guess! 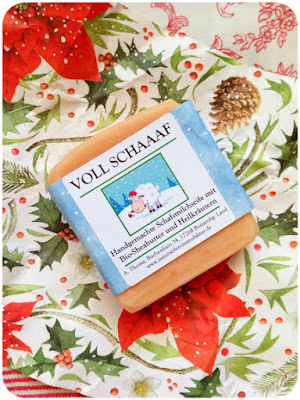 There was still another week of work to get through before my 12-day Christmas holiday and as usual it was hectic as hell. Plus, my commute home got worse every day as hordes of tired shoppers needed to take the tram at the same time as I did.

There was a highlight when one day a luxury bar of soap arrived all the way from Tina in Germany.

I'd actually won it, and I can tell you it smells absolutely heavenly, a fact which was confirmed by Phoebe, who went a bit crazy with the tissue paper it was wrapped in! 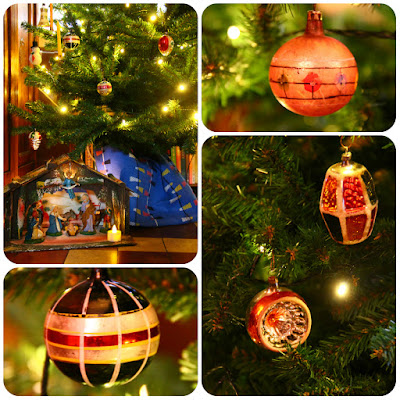 And then, finally, the weekend and ensuing holiday arrived.

Christmas is a quiet affair here at Dove Cottage, but we do like putting up some decorations. Our faithful old fake Christmas tree comes out of the basement, to be decked with our retro and vintage ornaments, some of which are family heirlooms. The blue 1950s style cloth wrapped around the tree's base is a family heirloom too. It's one of the tablecloths I recently brought home from my parents' house!

Uncharacteristically, Phoebe managed to break one bauble, but fortunately it wasn't a vintage one!

We never used to have a nativity scene, until a few years ago, when Jos came across the very same manger they used to have when he was a boy. We've improved it with a battery operated string of LED lights. 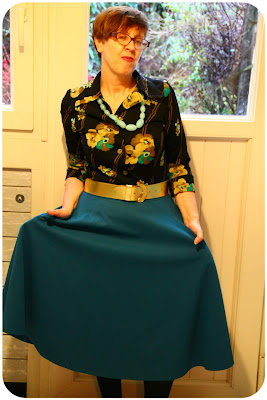 It rained all day that Sunday and it was dark and dreary outside. We even had to resort to taking outfit photos indoors, but I couldn't very well not show you my outfit. I was wearing a wide teal new-to-me skirt (with pockets!) combined with a black vintage blouse with a teal, beige and brown flower print, which I think came from Think Twice. Both the gold belt and light blue beads were charity shopped. 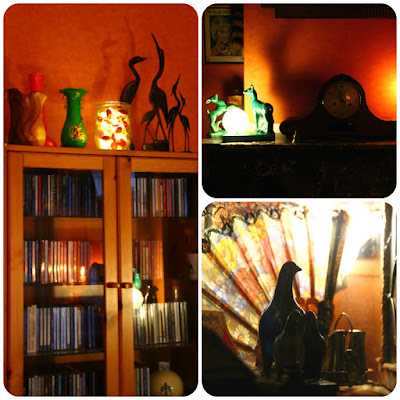 These dark days actually do suit Dove Cottage, its rooms dotted with a collection of small vintage lamps providing cozy pools of light. 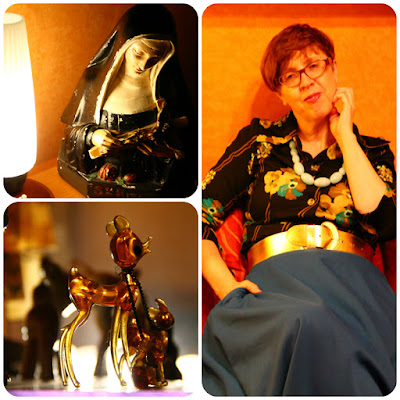 But I didn't have time to sit around all day. In fact, I had a date with a certain chest of drawers! 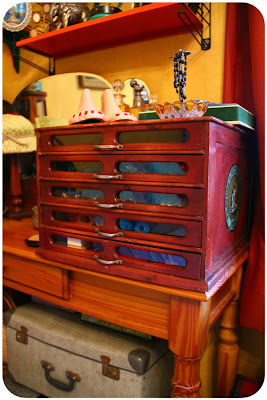 As I'm sure you might of have guessed, I am using them to store brooches, replacing two charity shopped sets of plastic drawers I'd been using as a temporary measure.

Needless to say, I had fun sorting through all my treasures, reorganizing them at the same time.

Below are the contents of four of the cabinet's five drawers. 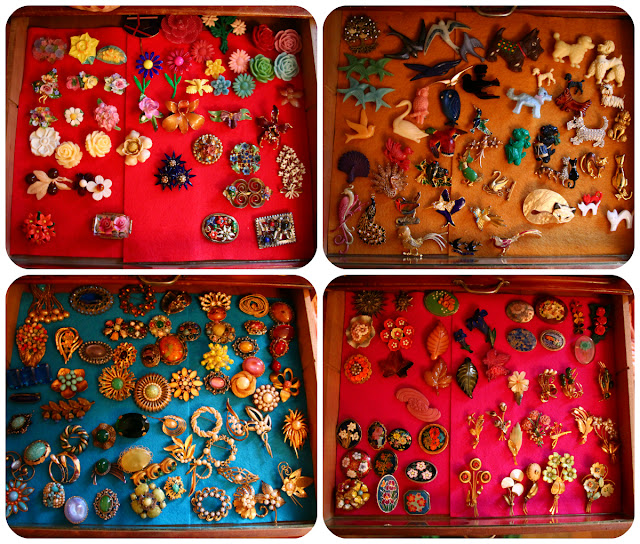 Apart from this set of drawers, I'm also using some shallow polished wooden drawer boxes, a gift from one of Jos's friends. I took the opportunity to reorganize these as well.

These are just four of the six drawers. I had no idea I had so many different butterfly brooches! 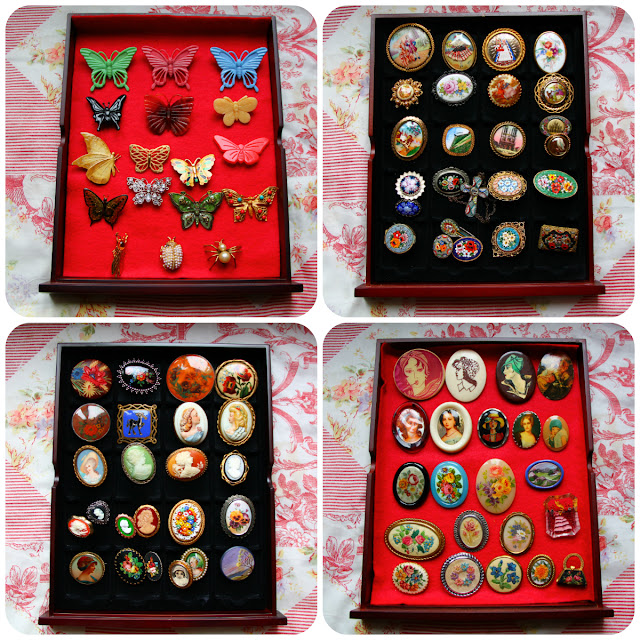 Finally, there's this hinged black lacquered box with ten deep compartments. They were a gift from the same friend, but I hadn't used it until now. They are holding some of my most delicate and precious brooches, which are only worn very occasionally. 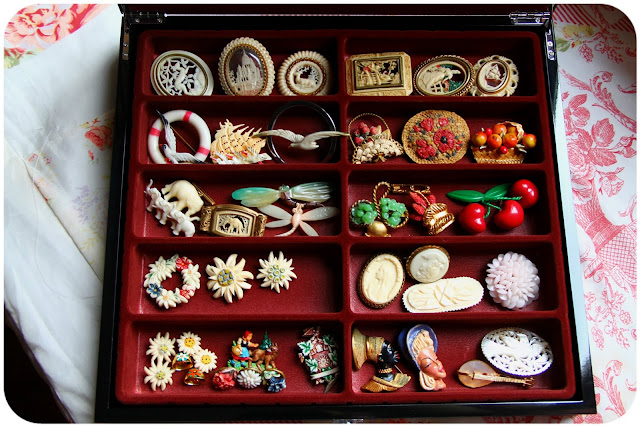 The last thing I did was try to count the number of brooches I've currently got, but unfortunately my mind went numb and I lost count at some point. However, I can safely say there are more than four hundred ...

I'm leaving you now with a photo taken in our garden on Christmas Eve. I grabbed Phoebe who was about to dash past me. Not sure she enjoyed it very much. As a matter of fact, I know exactly what she is thinking.*

I hope you all had an enjoyable Christmas, whatever you've been up to!

Posted by Polyester Princess at 19:40