In the beginning of this year - call it a New Year's Resolution if you like - we promised ourselves to get away more often and thus to regularly treat ourselves to short (and longer!) holidays.

With our long weekend in Bruges in April, our holiday in Shropshire in June, and our usual week in Belgium's west country in September, we were well on our way to achieve the goal we'd set ourselves.

Back in October we were casting around for a fourth and final getaway in November and, inspired by Tina's post about her visit to Zeeland in Holland, we decided this would be the perfect place to spend a couple of days.

After all, Zeeland, which is in the south-west of Holland, is only a stone's throw from where we live!

The Dutch province of Zeeland consists of a number of islands and peninsulas, with large parts being below sea level - hence its name, meaning "sealand" -  as well as a strip of land bordering Belgium. 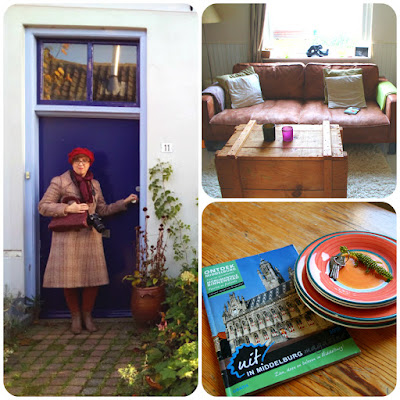 Our destination settled, we then started trawling the Internet and found exactly what we were looking for on airbnb: a compact little house on the outskirts of Middelburg, Zeeland's capital town, in the middle of the Walcheren peninsula.

And so it was that one week ago, on a bright and sunny Wednesday, we made the short journey of just  over an hour to Eveline's cottage, which turned out to be even more delightful than the photos on airbnb had promised. 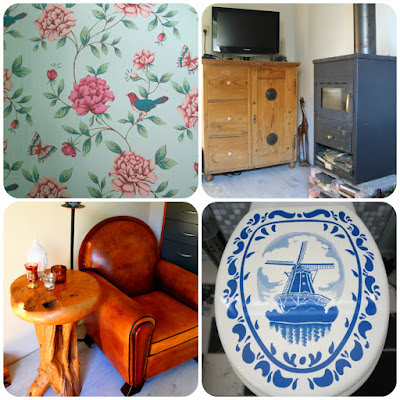 We arrived shortly after midday, with a whole afternoon still ahead of us.

After being welcomed by Eveline, and subsequently eating the packed lunch we'd brought, we explored the little house which would be our home for the next three days, making ourselves comfortable and looking forward to spending evenings cosying up in front of  the wood burner.

I took quite a fancy to the Art Deco style armchair, the pretty wallpaper on the stairwell and yes, the toilet seat in the bathroom with its Delft style decoration featuring the ubiquitous windmill! 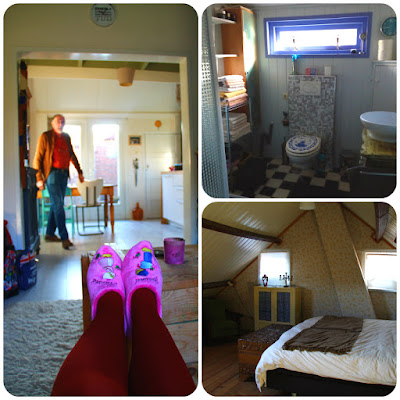 Leading off the cozy sitting room was a well equipped kitchen with dining area while upstairs, under the sloping roof, a light and roomy bedroom with a comfortable, adjustable bed awaited us. 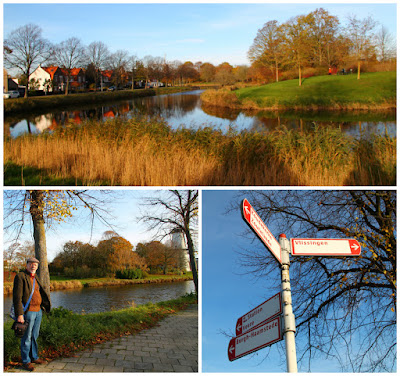 The house's location, on a quiet, narrow one-way street, couldn't have been better either. Even if there was no on-site parking, there was plenty of free parking space on a parallel street just a few minutes' walk away.

The car could easily be left behind for a stroll into town, taking less than ten minutes at a leisurely pace, starting along and over a picturesque canal with a park laid out on the old town ramparts on the opposite side. 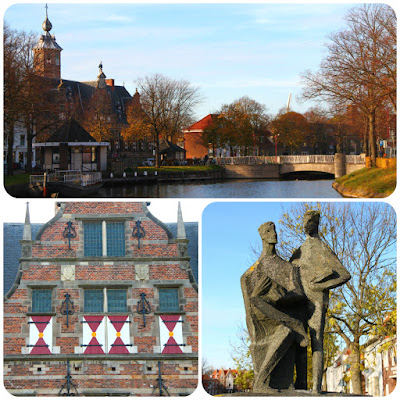 We crossed a second canal in front of the Kloveniersdoelen, an imposing building dating from 1609, which now houses a restaurant, but which served as a place of exercise for the army and a military hospital in its chequered history. 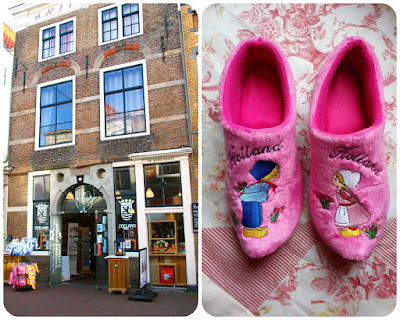 Having crossed the bridge we walked along one of the town's main shopping streets, the Langeviele, where a souvenir shop dedicated to all things Zeeland caught our eye. Or rather, the display of slippers in the shape of traditional Dutch clogs did. Tacky they might very well be, but I'm sure you'll agree that there was no way I could have left this pink pair decorated with the iconic Dutch kissing boy and girl behind ... 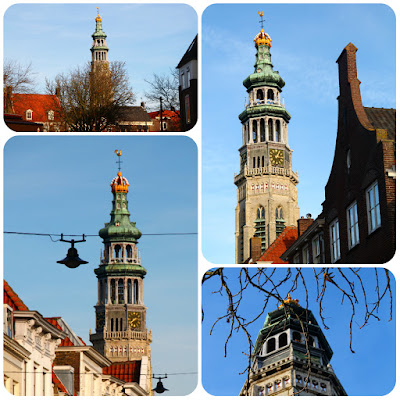 Soon we caught our first glimpse of Middelburg's most famous - and certainly most visible - landmark, the Lange Jan (lang or lange means long in Dutch), the 90,5 meter high tower belonging to the town's extensive abbey complex which was established around 1100 by Flemish monks.

Even though we were planning a more in-depth visit in a day or two, I couldn't stop making photographs of the slender wedding cake layered tower which is the town's emblem and visible from far and wide in the area's pancake flat landscape.

And it's a good thing I did ... but you'll read all about that in one of my next posts! 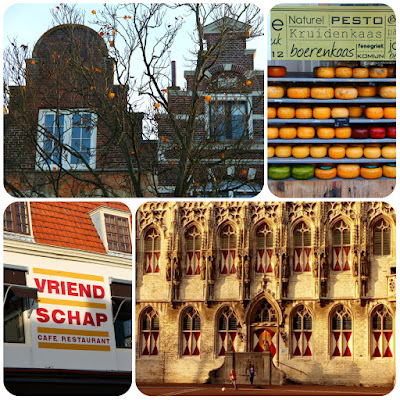 There's yet another Flemish connection to the town's magnificent gothic town hall, built between 1452 and 1520 by several generations of the Flemish family of architects Keldermans, originating from the town of Mechelen.

Dominating the market square, the richly decorated building, with its profusion of statues and little turrets and charming red, white and yellow shutters, was bathing in the golden Autumn sunlight.

It shouldn't come as a surprise that this is considered one of the finest gothic buildings in the Netherlands. In fact, in 2007, exactly 555 years after the first stone was laid, it was voted the second finest building in the country. 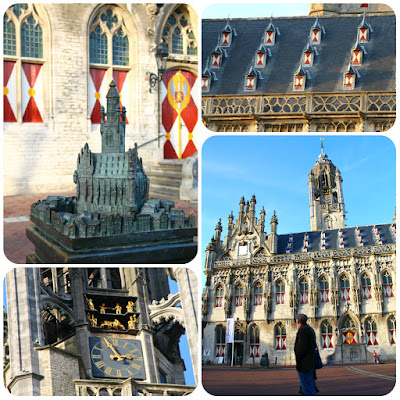 By then, our feet were getting tired and our throats dry, so we dived into the first inviting looking place for a restorative cup of coffee and a slice of cake. The establishment we'd walked into turned out to be an Italian ice cream parlour and, apart from the cakes, our coffee came with complimentary mini ice cream cones as well as lots of cream!

You can catch a brief glimpse of my green floral print dress and orange polka dotted cardigan here. 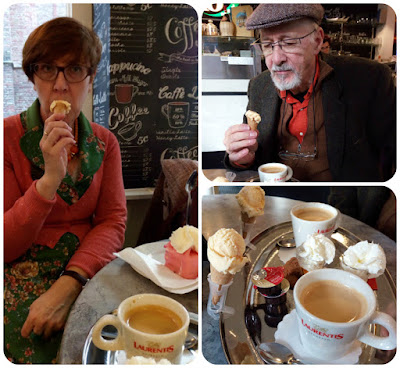 Emerging from the café, the sun was starting to dip towards the horizon, illuminating the city's streets and squares with her final, fiery light of the day.

Back at the market square, a brightly lit up stall selling traditional "oliebollen" (a kind of deep-fried, ball-shaped doughnuts) was ready for business, with a handful of hungry city birds hanging around hoping for a handout. 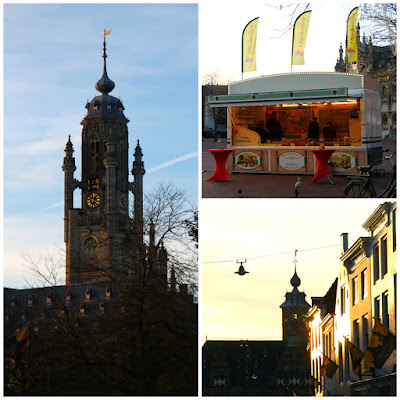 After our late afternoon snack, we weren't the least bit hungry so, instead of searching out a restaurant for our evening meal, we did some food shopping at the local supermarket before returning to our cottage. 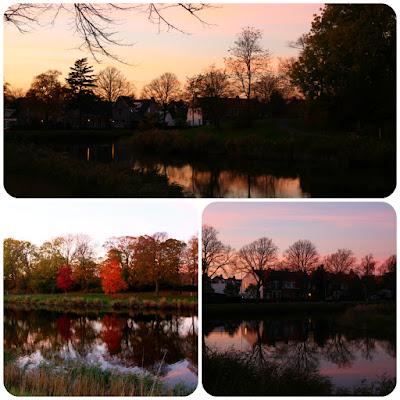 The sun had dipped even lower by then, the yellow ball of fire changed to hues of tangerine and pink, casting the stark, leafless silhouettes of the trees in a wintry glow.

A handful of trees still wearing their Autumn hues were reflected in the tranquil, mirror-like surface of the water.

In the houses beyond the canal, people were starting their evening routines. Here and there, twinkling lights appeared in windows, before the curtains were drawn on the approaching darkness outside. 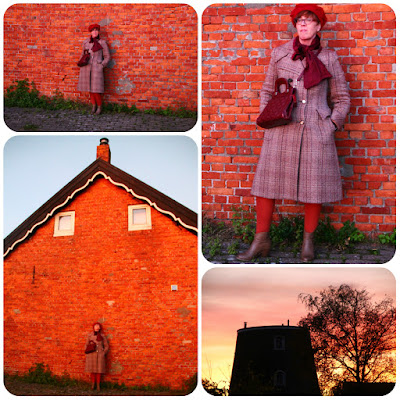 Before retreating indoors, we did a brief photo session, with me posing against the sunlit red brick side wall of our cottage. Note the two tiny bedroom windows high up in the wall and the charming curlicued gable ends. 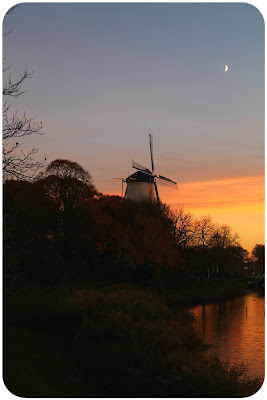 One last glimpse of the picturesque windmill, which would tempt me to take its picture every time we passed.

By now, a timid slice of moon had joined the retreating sun for the grand finale, the sun's fireworks making way for the dusky blanket of the night.

Time to go inside and light the fire.

Linking to Patti's Visible Monday at Not Dead Yet Style as usual, as well as to Nancy's Fancy Friday.