Last weekend was a quiet one and, apart from a visit to my friend Inez, involving coffee and apple pie, we hadn't anything planned at all.

We couldn't even go charity shopping on Saturday as all the shops were closed: November 11, Armistice Day, is a public holiday here in Belgium! 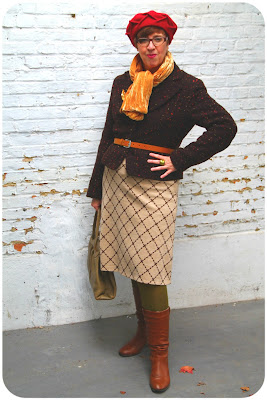 By a stroke of luck, though, the weekly market in our village was trading so, still on the lookout for the elusive burnt orange tights, I ventured outside. The rain we'd woken up to had diminished to a light but persistent drizzle by then, but it was still wet enough to warrant carrying an umbrella. 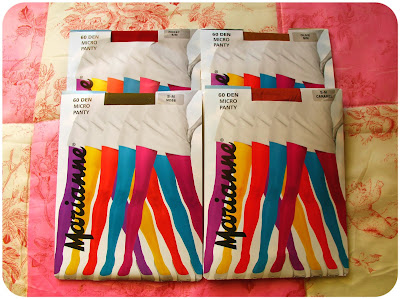 Sadly, the hosiery stall is discontinuing my favourite range of coloured tights and they only had some leftovers from previous years. But, hurray: they still had some burnt orange ones (actually called caramel) in my size, and I stocked up on a couple of pairs in rust, moss green and olive as well! 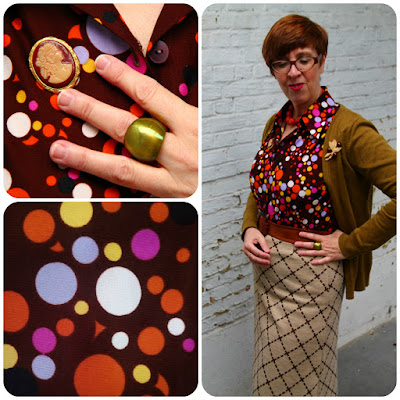 I'd been waiting to wear the striking aubergine blouse sprinkled with colourful spots for quite a while, but didn't hit on the right skirt to combine it with until I started pulling out my Winter skirts and found this one, in beige and brown polyester. Not really my colours and frankly speaking a bit boring: I'd actually forgotten about this skirt completely! 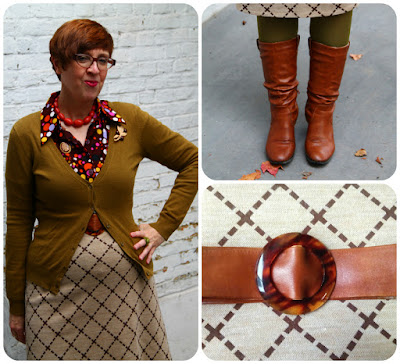 Once I had the skirt on, accessorizing was easy. I started by adding a brown belt with a round tortoiseshell buckle, and chose olive green tights and ditto cardigan.

The first of my brooches, a cameo, was pinned to my blouse, then a cream and brown plastic brooch, one of last week's finds, went on the cardigan. I also wore orange beads and a green plastic ring. 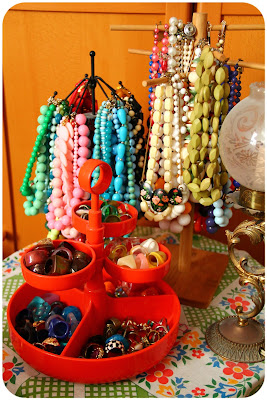 I have dozens of these plastic rings in different colours, picking them up whenever I find them, so they are a mix of high street and flea market finds. I store them in this 1970s orange party set, next to my collection of necklaces, so that they are within easy reach when I'm dressing.

On went the boots I can't say goodbye to and which I'll probably wear until they fall apart completely. 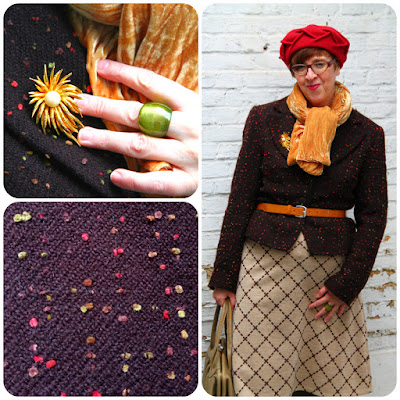 I wore the jacket I bought for € 2 at last week's flea market. It's dark brown with small multicoloured bobbles, which makes it less stark. I felt it needed a belt and added a dark ochre one.

My final brooch, a gold tone starburst with a large pearl at its centre, was pinned to the jacket.

I completed my outerwear with my yellow crushed velvet scarf and a red beret. If there's one thing I like about the colder weather, it's the fact that I can wear my berets and woolly hats. I've vowed that I'm not going to lose one this year, so I'm being extra careful with them! 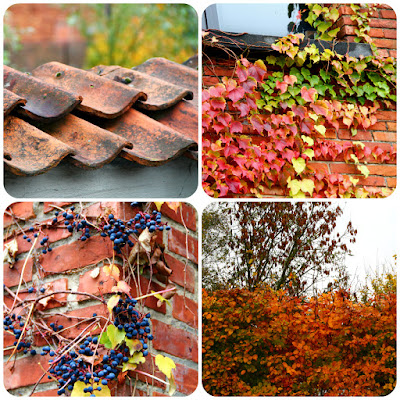 The weather continued to be fickle on Saturday but at least the soggy periods were interrupted with a couple of dry ones, with the sun making a shy appearance now and then, especially at the end of the day.

One thing is certain: sunsets can be quite dramatic this time of year! 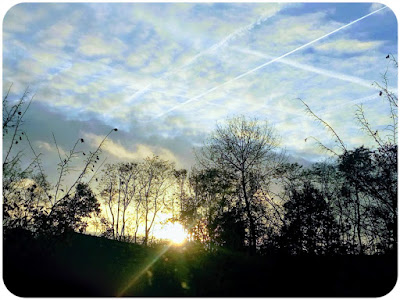 Sunday was a total washout, with the rain beating against our windows, daring us to go outside. 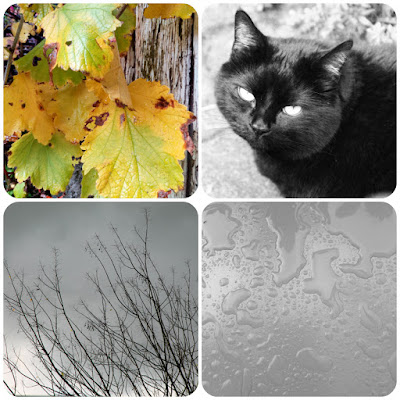 In the end, we only briefly went into the garden for these outfit photos. It started to rain again while we were taking them. I was shivering, although it was one of the rare occasions when I was wearing a jumper. 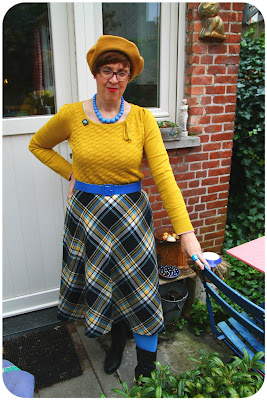 I picked up the woollen skirt for € 2 at one of the last Think Twice sales but again it took me a while to find a suitable companion. As it was cold enough to warrant a jumper, I decided on the lightweight yellow one. It was bought new in the sales a a couple of years ago, and I love its pattern and the little bow. The blue from the skirt was repeated in my tights and accessories: belt, beads, brooch and ring, and I couldn't resist wearing the yellow beret.

Although I'm quite happy with how it turned out in the photographs, I somehow didn't feel great in this outfit, finding it too bulky on my hips, which are not really my favourite feature at the moment.

The rest of Sunday was spent pottering inside Dove Cottage, one of the other things I like about this season. 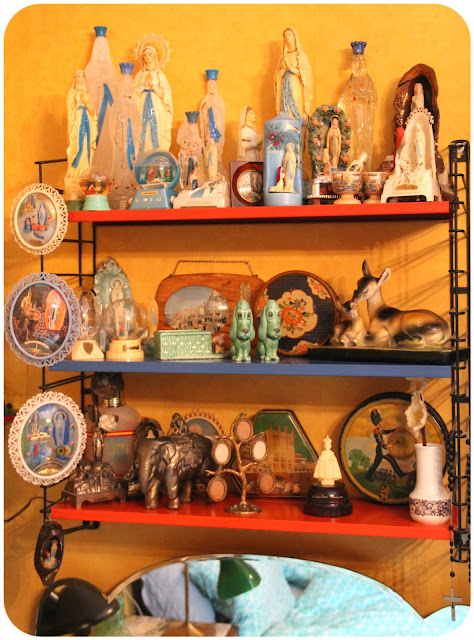 I was disenchanted with the shelves of Lourdes memorabilia in our bedroom and whittled them down to just the upper shelf, which is now crammed absolutely full of the kitschy stuff.

The other two shelves now contain a mix of old favourites and more recent finds. You might recognize the two tins bought at last weekend's flea market. 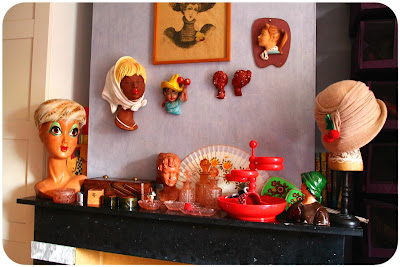 I also rearranged the mantelpiece in the spare room to make space for the latest "head" to join the collection, charity shopped for just € 1 a couple of weeks ago. 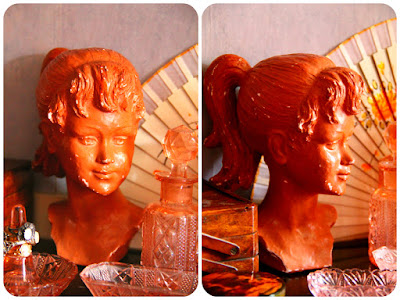 Nameless for the time being, she's already looking quite at home at Dove Cottage!

Once again, I'm taking my outfit to Patti's Visible Monday at Not Dead Yet Style.

Posted by Polyester Princess at 15:02