The whole of the moon

The pattern of bright and sunny weekdays interspersed with depressingly grey weekends seems to be on repeat.

Regardless of the weather, any outfit photos, or indeed any decent photos, can only be taken at the weekends, which is rather limiting. 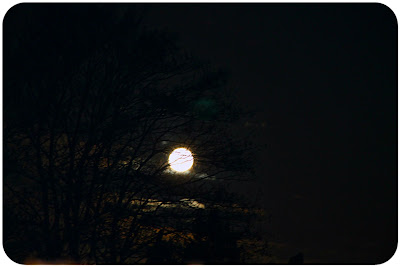 One morning last week however, I did take out my camera and from the kitchen window took this photo of the low winter moon hiding behind the trees a couple of gardens away. 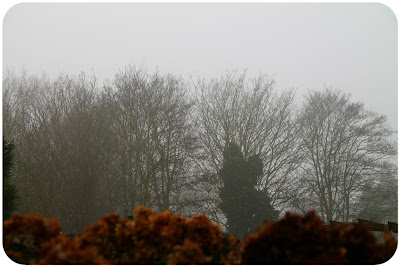 This is the view from the same vantage point on Saturday morning.

We were all set to go and visit a couple of charity shops, but our hearts weren't in it, knowing that at this time of year we would probably find nothing but Christmas tat.

There was a flea market in Antwerp, but we were so disappointed with its last edition in November that we'd vowed to give it a miss this month.

Weighing up the pros and cons of the flea market versus the charity shops, the flea market won in the end, and we were glad it did, as the general quality of the stalls was so much better than last time.

Having half promised to show some more of my black patterned dresses, I pulled out one of my favourites, another Think Twice find. 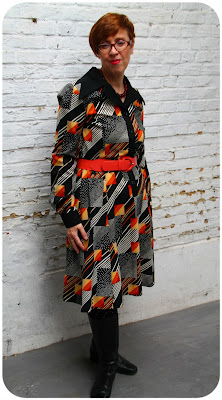 This "Petri" dress, a Swedish design, has a riotous geometrical pattern in white, red, orange and yellow as well as differently sized white spots.

Describing it like that makes it sound over the top, but it isn't.

In fact, I think it's cheering up a grey day like this no end!


I added a wide orange belt and, echoing the spots in the dress's pattern, a salmony orange cardi patterned with small white dots. 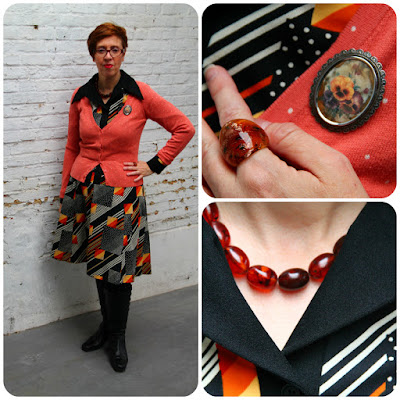 The brooch, featuring a posy of winter pansies, was charity shopped in Wales. The beads came from Think Twice (again!) and the ring is from a cheap high street shop. I can't resist a plastic ring, and have them in every colour under the sun. 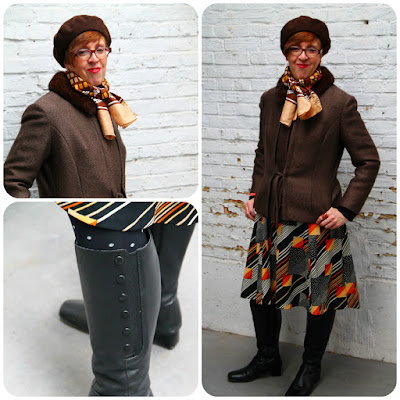 I wore my favourite fake fur-collared winter jacket (dare I say it: from Think Twice!) and a pair of boots I charity shopped a month or two ago. I wasn't looking for another pair of black boots but was tempted by the neat row of buttons. They have been a staple ever since. 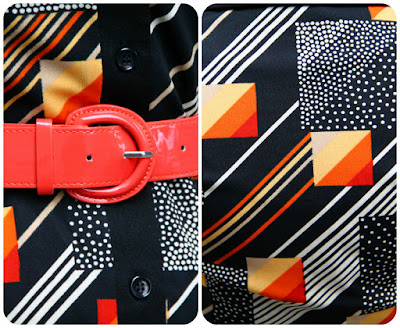 I'm sure you'd want to take a closer look at the dress's pattern, so here it is!

Back to the flea market, where the only thing that annoyed us was the endless Christmas music in the background. Even though I was only half listening, I ended up with a Christmas ear worm of the worst kind. Ugh, it's still there three days later! I'm going to be a good girl and won't mention which one ...

There were so many goods vying for our attention and quite a few stalls were having a clear out, which I'm not really sure is a good sign.

The upside is that we didn't spend very much, yet came home with a bagful of lovely things. 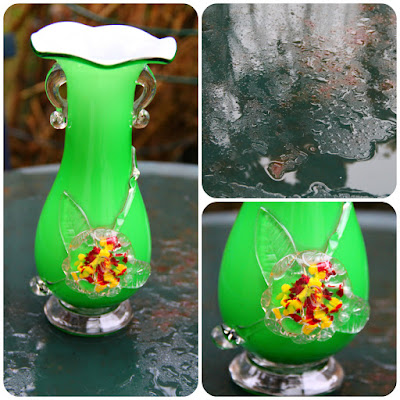 This clear green vase with white painted interior is ornately decorated with a multi coloured glass flower. We already have a similar one in orange, which it has joined in the meantime. It was ours for € 3. 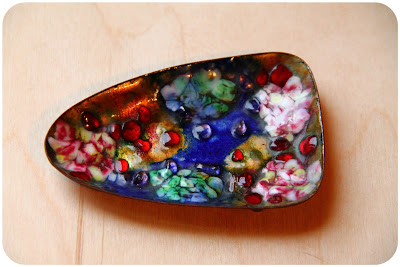 From the same seller, we bought this small enameled copper dish for € 1. Aren't its colours a feast for the eyes?

As we were on a roll, and the stall really had the most wonderful things, we ended up buying this pristine box of stereoscopic images of the Cote d'Azur ... 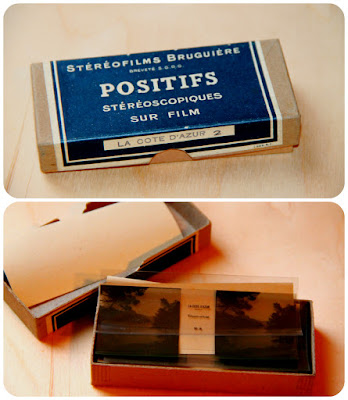 ... as well as this little vintage lamp. 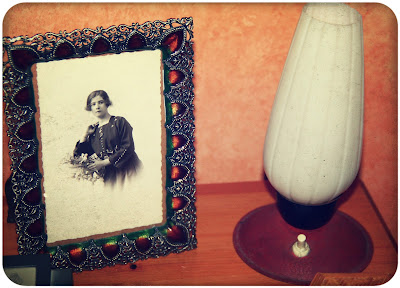 The lady in the photo is my maternal grandmother, Bertha, who really deserves a post of her own sometime.

What about brooches? Well, obviously I couldn't pass the "brooch lady's" stall. She'd brought the gorgeous micro-mosaic one (top right) especially for me. 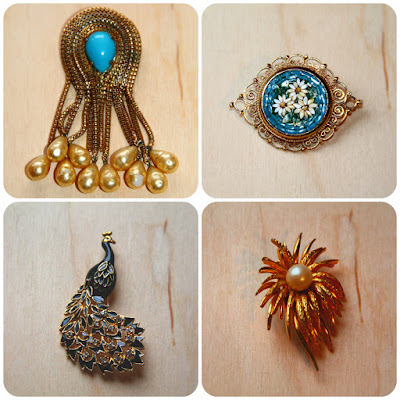 The peacock also came from her, while the other two were bought from random stalls. 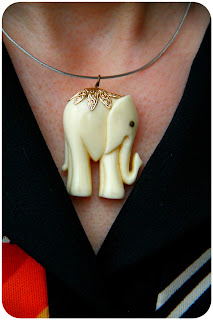 I fell in love with this elephant pendant, which I added to some redundant jewellery wire I had lying around.

It's going to look great when worn together with one of my elephant brooches of a similar style.

Maybe Gisela's love of elephants is rubbing off on me?


Next up was this vintage biscuit tin to add to the collection in our kitchen. 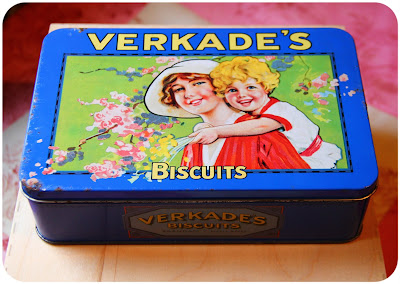 Our final purchase of the day was this fabulous green Murano glass dish with handkerchief rim. 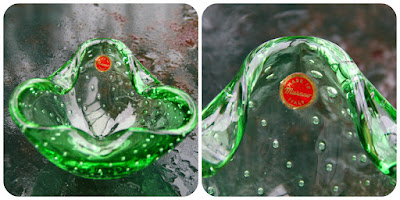 Then it was back home, where I decided to try out some funky Christmas decorations. Here, I added strings of magic mushroom fairy lights to two vintage beer glasses found at my dad's house. 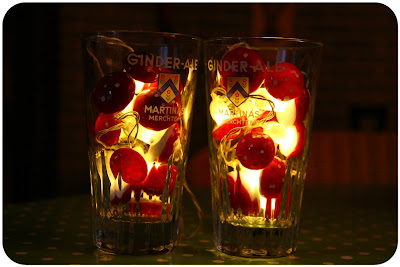 There, that should do the trick!

What do you think?