In the velvet darkness

The days are short
The sun a spark
Hung thin between
The dark and dark.
~John Updike, A Child’s Calendar, 1965


The darkest days of the year are almost upon us. We have also been in the throes of some bitterly cold but fortunately dry weather.
In the morning, I'm leaving the house while it's still dark, wearing many layers to protect myself from hypothermia during my commute, and it's dark again before I even leave the office in the evening.
It's a good thing I like wearing coats, hats and gloves!

At work we are being swamped with orders, which is kind of a tradition of its own in the weeks leading up to Christmas. I even worked through most of my lunch breaks last week. When I eventually did go outside, I made a beeline for Think Twice, as they were having their last sales of the year. 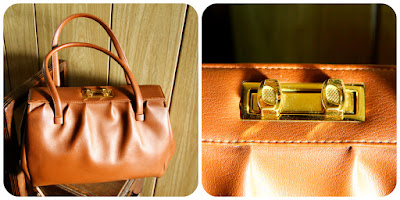 I'd stumbled upon this handbag while out shopping with Princess Inez on the Friday before last, but I didn't buy it at the time, as it was somewhat out of shape. I guess I was lucky it was still there when I went back for it, but as the price had been reduced in the meantime, it was definitely worth the gamble. I've stuffed it full of scrunched up newspaper to get it back into shape.

At the same time, I bought another handbag which you'll get to see in the outfit photos later in this post. 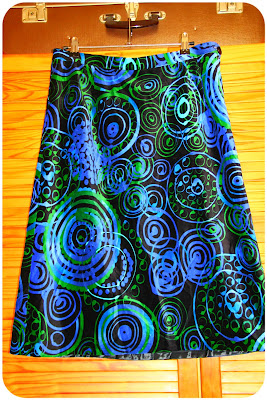 I also found this fabulous velvet skirt, featuring some of my favourite blues and greens, although with my colour blindness, I'm not too sure which is which.

I already wore it to work this week, combined with a jumper in the exact shade of one of the blues.

Oh, and before the week was out, we had a minor disaster at home. One evening, just before going to bed, our kitchen tap, one of those single lever mixer taps, cleanly broke off, with the hot water still running. There was nothing for it but to completely turn off the water supply ... 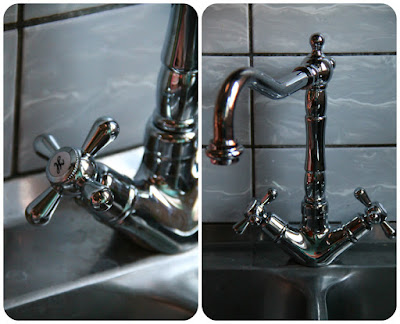 Under strict instructions only to come home with an old-fashioned tap, with separate handles for hot and cold water, Jos went out and bought this antique style beauty, which was actually the only one of its kind which didn't cost a fortune. 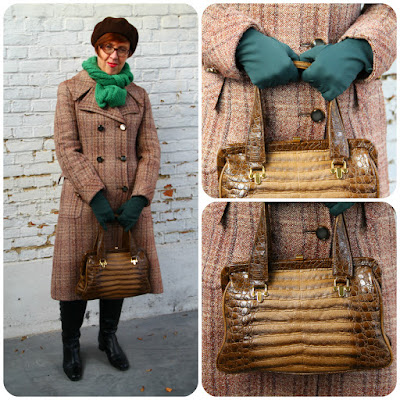 By the weekend I was knackered, and with the temperature still barely above freezing point, we only briefly ventured outside for a short trip to the charity shops.

You have seen the coat before, but not the handbag. This is the one I was referring to earlier. 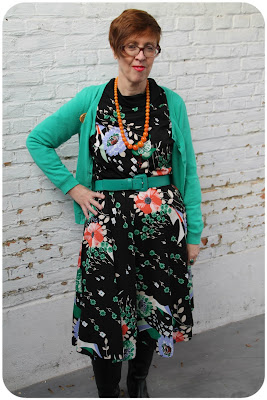 I've actually got quite a few these black printed dresses in my wardrobe, most of them featuring flowers of some kind.

I guess they need to come out more often. 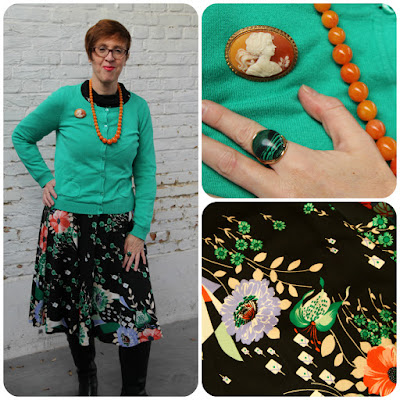 At first we thought we needn't have bothered, as there was a Christmas market taking place at our shop of choice, with the ubiquitous Christmas soundtrack in the background, free mulled wine and lots of merriness.

However, once I'd found a quiet spot in the book department, I knew I wouldn't go home empty handed. 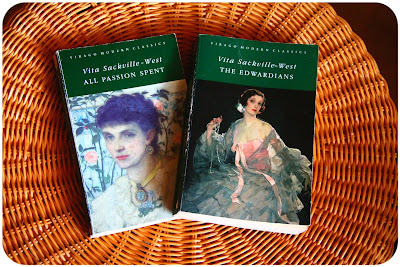 At least one of these novels by Vita Sackville-West will be next on my reading list. 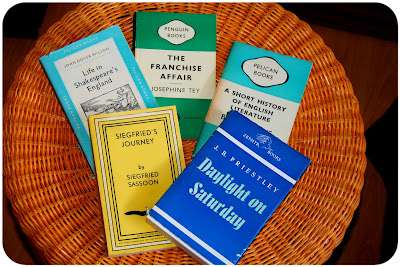 Having just blogged about my vintage paperback collection, I was happy to find this lot. 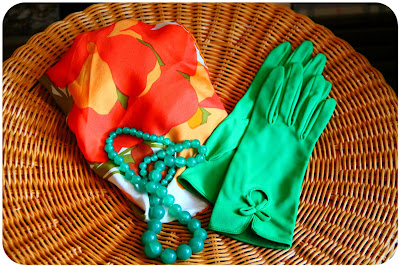 As we continued our browsing, still well away from all things Christmas, I stumbled upon a silk scarf (€ 1,20), some vintage beads (€ 1,50) and a gorgeous pair of green vintage gloves, which all seem to go rather well together. 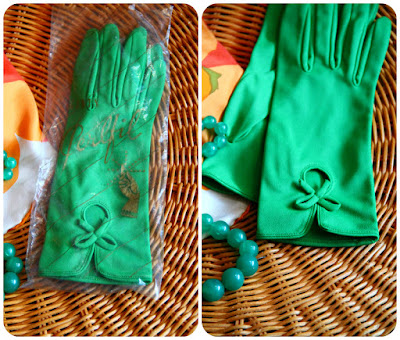 The gloves, which are pristine and were still in their original plastic packing, were peeping out from under a heap of cheap tat which was languishing in a basket at the till. Typically, they weren't priced, but after giving it some thought, the shop attendant said they were €0,25!

We handed over our money and ran! 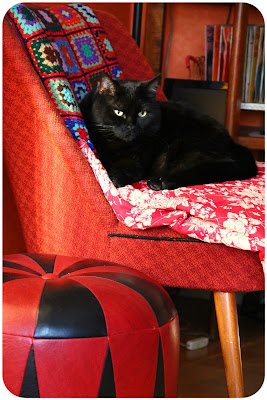 The rest of the weekend was spent pottering around the house, but - busy bee that I am - I wasn't as lazy as some other member of our household!

On a positive note, we did book our holiday cottage in Wales for next June.

It's just over six months away, after all.