Last weekend, I bought a raspberry beret, though unlike the subject of Prince's song, I didn't find it at a second hand store, but at last Sunday's flea market. 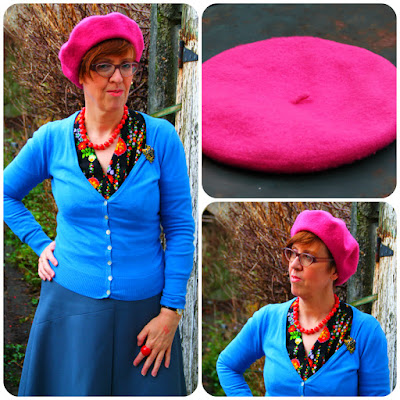 I'm always on the lookout for berets, which I'd like to have in as many colours as possible. Jos would add that I'm always losing them, but honestly, that's not true: I only lost two so far. To be fair: they were two of my favourites, both "Kangols" to boot. It's a good thing they were all bought second hand, but still ...

Anyway, I am digressing here.

The flea market we went to on Sunday was the last one of its kind this year. It's an outing we always look forward to, as we've yet to come home empty handed. 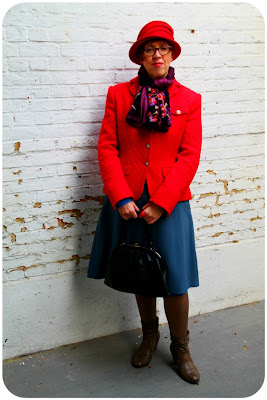 I started out wearing a red felt hat - and not the beret, of course - as well as a purple flower embroidered velvet scarf, which I bought for € 0,50 at a flea market about a year ago.

The red woollen jacket often accompanies me to flea markets at this time of year.

I actually prefer wearing a jacket rather than a full length coat to fleas, so that I can rummage through ground level boxes without ruining my coat's hemline.


I couldn't resist wearing my new blouse, which I combined with a 1970s Trevira front-pleat A-line skirt in a greyish blue. I have the same one in chocolate brown, and both still have their original belts. 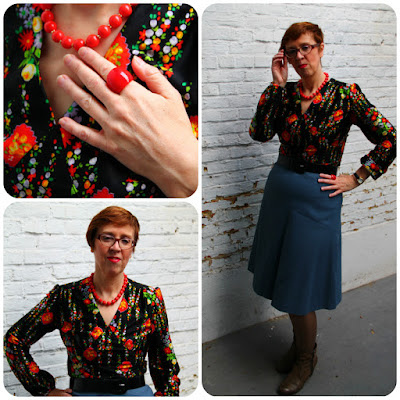 This time, I replaced the belt with a shiny black vinyl one. 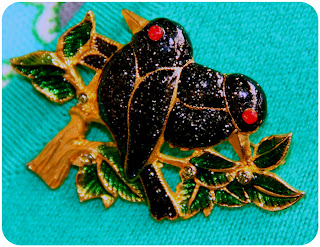 I chose a blue cardigan to wear on top and my accessories consisted of a red plastic ring, vintage red plastic beads and a brooch featuring a pair of sparkling blackbirds. 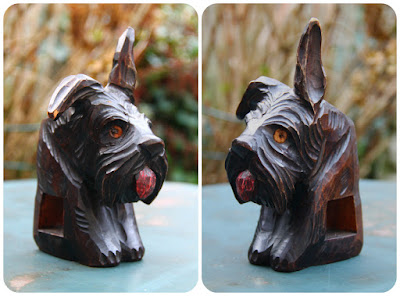 We had hardly made a start when we came across this wooden Scottie dog. I don't know what it is with me lately. Although I am much more of a cat person, cute dog ornaments and brooches suddenly appeal to me. But no worries, I'll still end up a crazy cat lady, of that I'm sure! 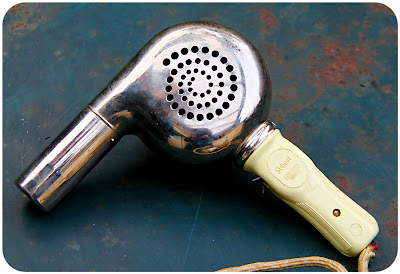 Next up was this 1950s hairdryer with chrome body and Bakelite handle. Originally priced at € 8, but already reduced to € 3 as the guys selling it were having a clearance, we were practically begged to take it off their hands for € 2. 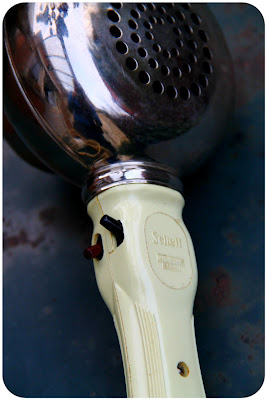 It's from a German brand named "Schott" and it seems that there was a black Bakelite version as well.

Apparently, it is missing the nozzle, but I never use that anyway.

It was still in working order, but Jos has been bringing the electrics up to date so that I can actually start using it.

From the same stall, we bought some more Bakelite, both at silly prices. 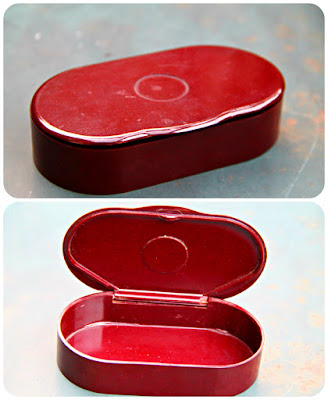 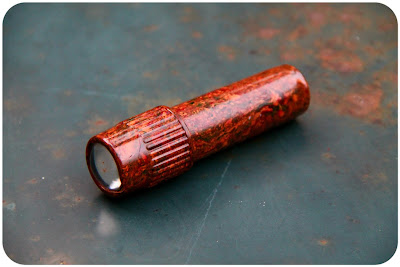 We continued our journey, and had only gone a few paces when a boxful of vintage buttons caught my eye.

I am not a sewer, just a  "replacer-of-buttons", which of course is a necessity when buying vintage clothing, and I can never ever resist a rummage through some vintage buttons.

They are so much nicer than what's on sale nowadays, and as these were only € 1 per set, it would have been rude not to buy any. 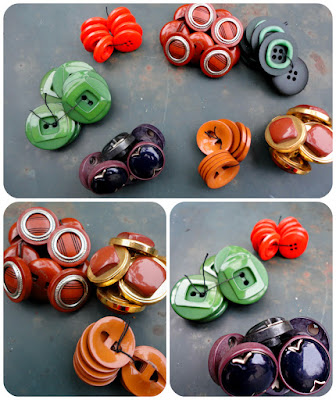 The "brooch lady" doesn't have a pitch at this market, more's the pity, but I still managed to find a couple of nice brooches, as well as a pair of amber coloured earrings, for € 2 each.

It looks like one of the elephants was trying to escape, the little rascal, which was soon fixed by my personal handy-man, Jos. 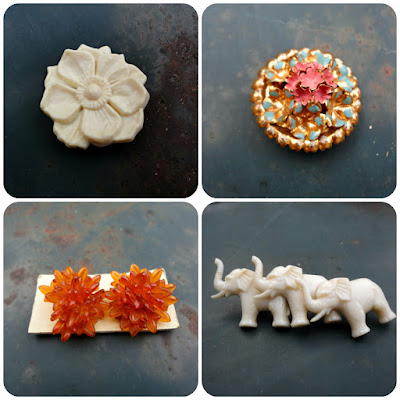 I came across several drool-worthy brooches, but all were way beyond what I was willing to pay.

The owner of one stall, who trades at several flea markets we are frequenting, automatically says € 10 when asked for a price. Now, I'm not saying that some of her things aren't worth € 10,- but she never, ever differentiates. If you look doubtful, she adds that the item is "old".

Nevertheless, we can never resist asking her the price of at least one item just to test her. 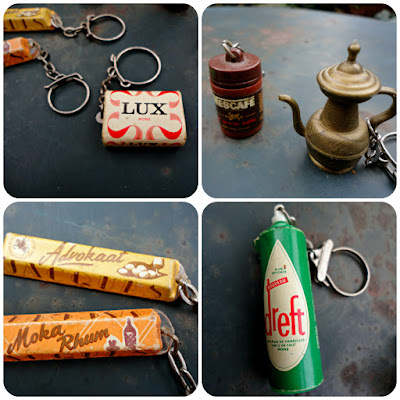 Ever since I blogged about my first proper collection, the keyrings, I always look out for them on flea markets and often end up buying some I remember having as a child.

Aren't those chocolate bars and the Dreft washing up liquid (Belgium's version of Fairy Liquid) super cute?
I loved playing with these as a child, so no wonder most of them didn't survive ...

Our last purchase was the raspberry pink beret, which cost € 2, and which neatly brings us back to the start of this post!

No flea markets this weekend, so what shall we do?

Whatever it is, it won't be Christmas shopping, that's for sure!