If working only a two-day week might have given me oodles of time, one thing that hasn't changed is that I'm still lagging behind with my blogging time-line. As a rule, I'm writing about what I did and wore a week or more ago, but where in pre-Corona times my posts were firmly centred around my weekends, almost inevitably including my charity shop and flea market finds, my musings now cover weekdays as well. In my life as it is now, there is little or no distinction between weekdays and weekends anyway.

My none-office days are usually well filled, and I have yet to come across a boring moment. All the same, at the end of a day I'm often left wondering where the time went and what I've actually done with it. 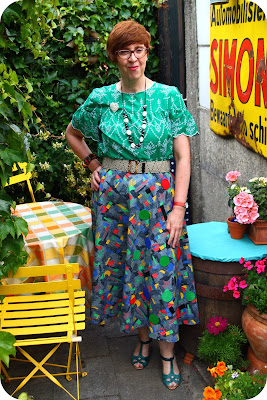 Take Friday before last, for instance. My photographic record tells me what I've been wearing and, as it was a Friday, it must have included a visit to the garden centre. The rest is a bit of a blank as once again I forgot to make a journal entry.

With no further rain clouds on the horizon, and the weather's cruise control set to default sunshine, I dug this green embroidered peasant-blouse from my drawer of Summer tops. With its short, scalloped trumpet sleeves, it is an absolute joy to wear. A sales bargain from New Look about two years ago, this certainly isn't its debut on the blog, as it has proved to be surprisingly versatile. Here's how I wore it in August 2018 and again later that month.  It also came on holiday with me in June 2019, when I wore it to visit Powys Castle. 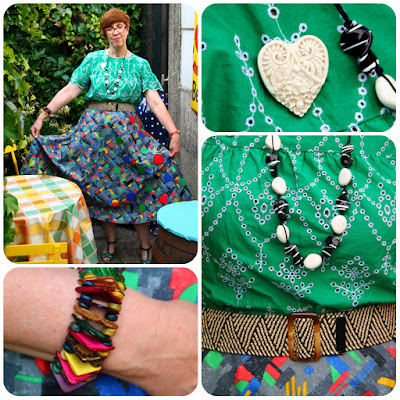 The skirt I decided would be its companion this time around was a cotton retro print circle skirt I'd found in a charity shop back in December. The black and white necklace was charity shopped as well, while the multi-coloured bracelet was a flea market find.

The stretchy belt, with its funky triangular pattern and mock tortoiseshell buckle, on the other hand, is brand new. It's one of two belts I picked up from an accessories shop in Antwerp during a rare lunch break outing the other week. 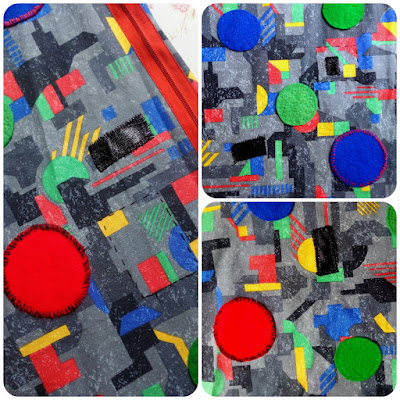 Let's have a closer look at hat skirt, which is something of an oddity.  In spite of the fact that a label has been sewn in, I am sure that the skirt is handmade and that the label is a personalized one. It's got a visible red side zipper and features random felt circles and visible stitching on the front left side only. An unfinished project, perhaps? Whatever the case, it's quirky and I love it. On the off-chance that whoever created this skirt ever reads my blog, I'd love to hear its story! 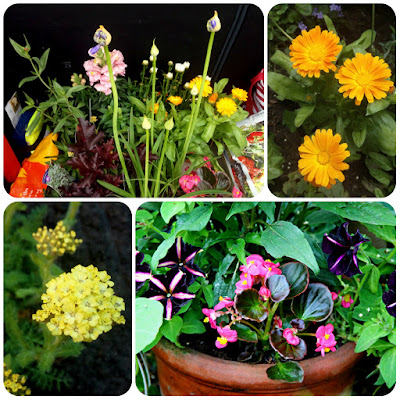 Our shopping list for the garden centre that day included a bag of compost as well as some plants to replace the unfortunate Tagetes which the slugs and snails in our garden had stripped down to some sorry looking stalks and one or two droopy half-eaten flowers.

Being a self-confessed plant-o-holic, we bought more than we'd bargained for, but we did get some Pot Marigolds (Calendula) and trailing Wax Begonias, which research ensured me weren't on the slimy creatures' menu. 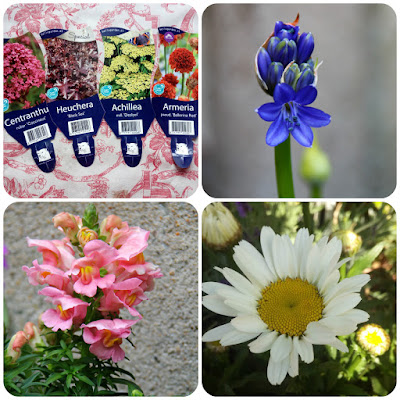 There were some perennials to add to the new border as well, and I couldn't resist a shorter stemmed variety of Agapanthus, some Ox-eye Daisies and a pot of pink Snapdragons.

I'm pleased to note that the other Snapdragons which are dotted all over the garden have started blooming again after I'd cut them back a couple of weeks ago.

Back at home, I removed the remains of the Tagetes and put them into the compost bin, planting the Calendula in the space they'd vacated in the border. The trailing Begonia replaced the single Tagete which I'd been foolish enough to put in a planter teamed with Echinacea and purple and cream striped Petunias. A week later, and there's still no sign of any slug or snail damage. However, as if to spite us, the gastropods - as apparently they're officially called - have now moved on to the Petunias. Oh dear! 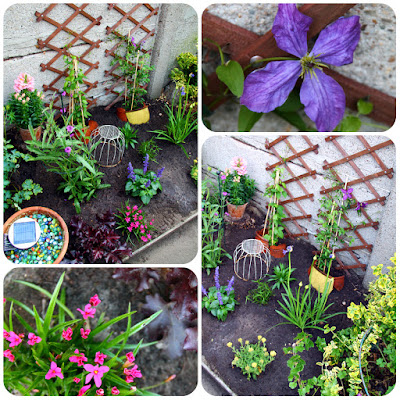 On Saturday, I took advantage of the morning's cooler temperature to add the perennials we'd bought to the new border, noting that the lavender flowered Clematis had opened its first blooms.

As we expected our first visitors since before our semi-lockdown, I then changed into something celebratory for the afternoon, opting to wear one of my maxis. 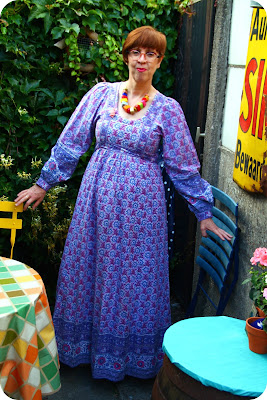 I promised Vix first dibs on it in case I should I ever get tired of it, but somehow I don't think that will ever happen.  It's a 1970s Indian cotton Ritu Kumar for Roshafi dress with a quilted bodice and the most massive sleeves and was a lucky find in a charity shop back in November 2018. 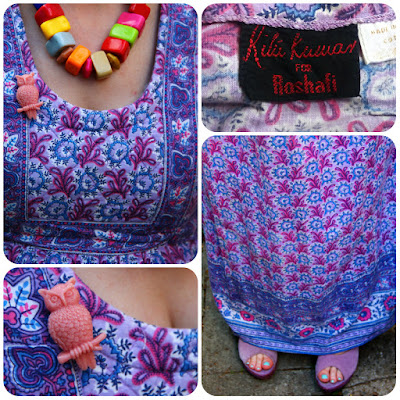 My accessories of choice were a multi-coloured wooden beaded necklace, which was another charity shop find. The lilac suede shoes were an old retail buy from C&A, while the pink owl brooch is modern and came from a delightful little shop in Antwerp. 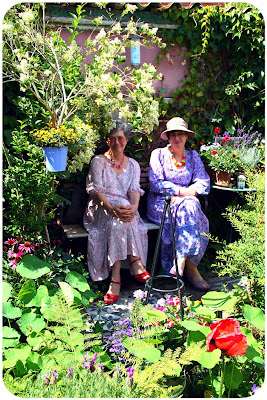 Now that we are allowed to extend our bubbles, it was about time that we met up with our friends Inneke and Maurice.

We kept our distance as much as possible (in Belgium, this has always been 1,5 meters rather than the 2 meters which seems to be the rule elsewhere), and obviously we didn't hug or shake hands, but Inneke and I couldn't resist having this happy photo taken while sitting on our garden bench surrounded by a riot of flowers. 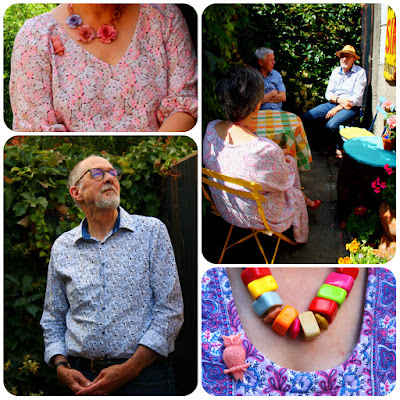 The eagle-eyed might have noticed that both Inneke and I are wearing the same brooch. She loves owls - she even has a face mask with an owl print - and she'd admired my brooch when she spotted me wearing it on Instagram a couple of weeks back. With her birthday coming up, I walked to the shop where I'd bought it one day during lunch break, crossing my fingers that they would still be stocking these.

I had to queue outside for a while as only two people were allowed into the shop at once, but it was definitely worth the wait, as I managed to snag the last of the owl brooches! 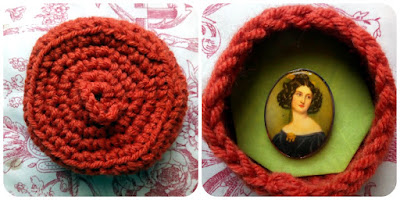 Inneke came bearing a gift for me as well: a gorgeous scarf clip tucked away inside a crocheted lidded box.

A lovely afternoon was had by all, involving coffee and cake and the mother of all catch ups! 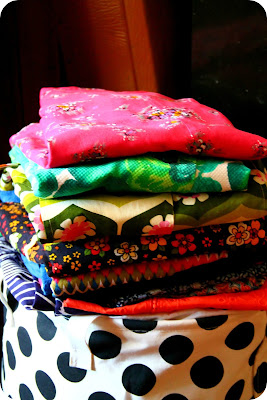 As is often the case, I was feeling a bit morose on Sunday, but I've learned to my advantage that once I start tackling a job on my to-do list, I soon start feeling better.

With a heatwave forecasted for the week ahead, I wanted to be prepared and have a choice of lightweight cotton clothes at my disposal.  As most of them were still residing inside a suitcase from which they emerged all crumpled and creased, there was nothing for it but to have a good old ironing session. 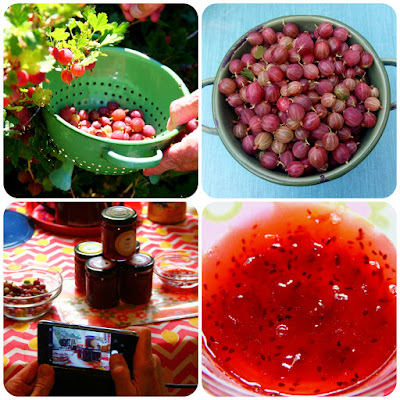 Meanwhile, Jos had picked all the ruby red gooseberries, a whole colander full of them, from which he proceeded to make no less than five pots of jam! 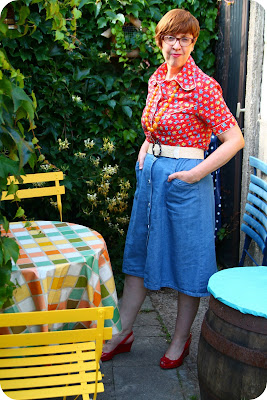 I'm leaving you for now with the outfit I wore that day.

Again, the odd one out was the raffia stretch belt with its round multicoloured buckle, which was the only retail purchase in my outfit. The denim button through skirt and floral cotton/polyester mix shirt were from Think Twice, while the bracelets and the brooch were charity shop and flea market finds respectively. The Clarks slingbacks came from a charity shop in Bridgnorth which we visited in June 2019 and, finally, the yellow beaded necklace was another gift from Inneke. 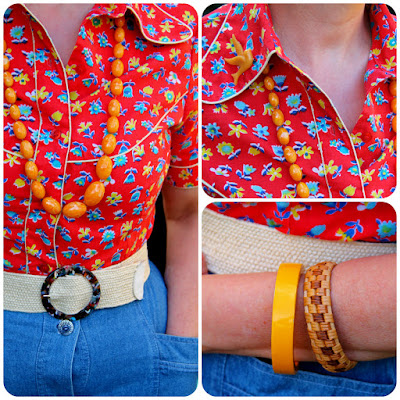 And then another four-day weekend was over, having passed almost as fast as a two-day one.

With another week in my so-called "new normal" coming up, all that's left is for me to bid you goodbye for now. Please do stay safe and positive, my friends!