Hello, and welcome to another interruption of my travelogue for a July update.

After all, the events I'm writing about here have happened just under a month ago. No fear of them disappearing into the mists of time any time soon, though, as life has been a bit of  a rollercoaster lately.

It was the day after our flea market - the calendar tells me this was Monday the 18th of July - and I wasn't exactly ready for another working week.  My colleague was on holiday, so that I wasn't able to take the day off to chill out and take stock after a day of trading.

We were quite exhausted when we called it quits on Sunday, but I still managed to put away my unsold items, shaking my head in disbelief at some of the things for which there hadn't been any takers. 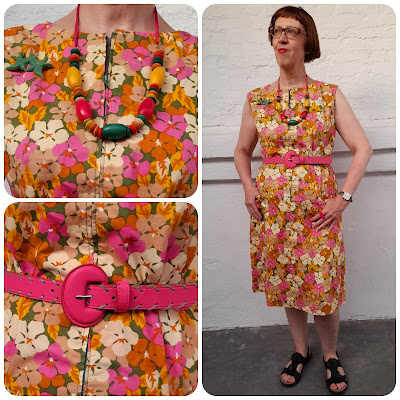 Take this joyous floral cotton Summer dress, for instance. After falling in love with it in a vintage shop in Bridgnorth during our 2018 holiday, I'd only wore it the once. It's a handmade cotton shift dress closing with a front zipper but, as much as I was swooning over its fabulous colours and print, it just didn't feel right on me. Hence its relegation to the flea market rail!
With a short but fierce heatwave forecasted for the days ahead, the temperatures expected to climb towards 40°C, I knew its crisp cotton fabric would be just the ticket, so that I was willing to give it another try. This time, it felt just perfect, so it's a keeper after all.
I kept it simple by adding my green swallows-in-flight brooch (bought in Cardigan many years ago) and a wooden beaded necklace (charity shopped) which is picking up all the colours of the dress.
The squishy pink belt threaded with green was a recent sales bargain from Mango, which I'd been stalking for months, waiting for that final reduction. 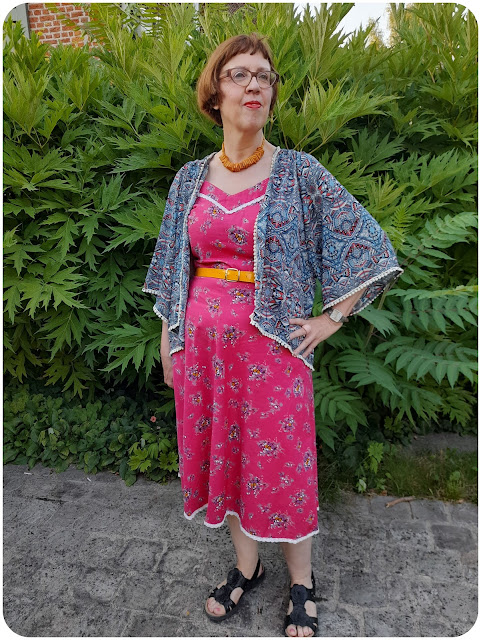 If at 35°C the temperature was already more than I could bear on Monday, the weather gods pulled out all the stops on Tuesday, the mercury climbing to just under 40°C that day.
Trimmed with white broderie anglaise at the bodice and hem, this 1970s pink cotton sundress sprinkled with posies of flowers, only comes out to play on the hottest of days. Again, I kept it simple, adding a mustard yellow vinyl belt and a necklace featuring tiny tiles in the same colour.
I wore my by now ubiquitous haori style cover-up to keep the chills at bay in my air-conditioned office. I might not be a fan of the latter, but the sweltering, brain-numbing temperatures left me no other option! 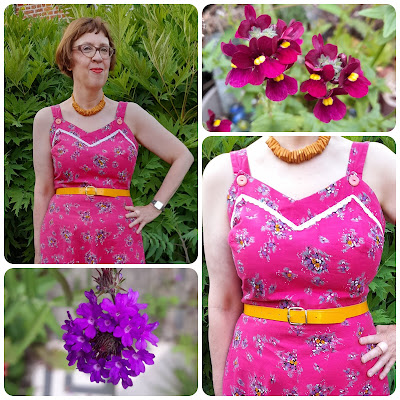 In order to avoid having to go home when the day was at its hottest, I took the afternoon off, taking shelter in the relative coolness of Dove Cottage's darkened rooms.
I only ventured into the garden to water the poor patio pots at around 9.30 after the searing heat had somewhat worn off.
Exceeding expectations, the Sweet Peas seemed to be taking it all in their stride. Aren't they glorious? 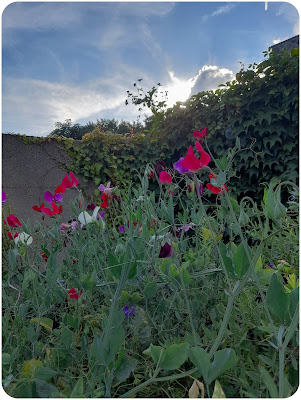 Much to my relief, the uncharacteristically hot temperatures were only short-lived, and by Wednesday we were down to an infinitely more bearable 26°C. We were even treated to a shower mid-morning.
It was still warm enough to continue wearing my cotton Summer frocks though, and this time it was the turn of one of my all-time favourites. A Think Twice sales bargain in June 2017, it has been with me for well over 5 years now. At the time, I couldn't believe my luck that its funky florals were still gracing the rails when prices were down to a silly € 4.
I always seem to be wearing either pink or orange with it, and often both, like I did this time. It definitely wasn't the first time I pinned the pink straw flower brooch to its collar! 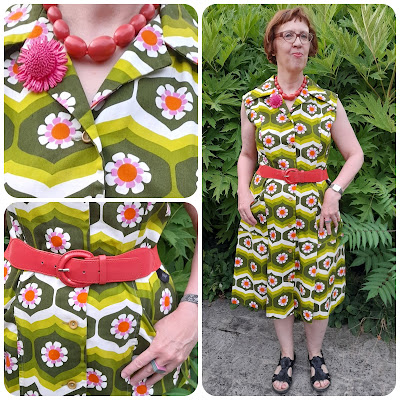 On Tuesday the 21st, it was Belgium's National Holiday, so I had the day off.  As the weather was supposed to cool down to just 21°C, we'd earmarked the day to tackle a rather unpleasant task we'd been putting off while it was too hot. Now wasn't it just our luck that we woke up to rain which lasted until the early afternoon?
Those of you who have been following my blog for a while might remember me mentioning the passageway which leads between our kitchen extension and the garden wall once or twice. Both our kitchen and dining room look out on this paved area, which is about 1,20 metres wide and 5,5 metres long, and which we'd filled with a window box, as well as a corner unit and an old table brimming with plants and general bric-a-brac. 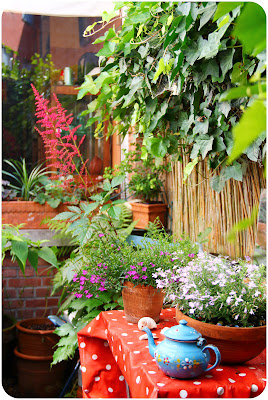 The wall separates our property with that of our neighbour's, which is basically the mirror image of ours.
When he moved in about three and a half years ago, our neighbour divulged his plans to extend his kitchen to the full width of the house, which would mean that the communal wall would have to be removed and replaced with the wall of his kitchen, which would obviously be a lot higher than the current wall.
Not having heard anything further about his plans for all those years, it came as a bolt out of the blue when, just after our return from holiday, he told us things would go ahead at the end of July. This meant that we had to clear the passageway, move the contents our lovingly created slice of paradise elsewhere as well as remove the climbers growing up the wall in record time. With no further time to lose, we were out there once the rain had stopped and emptied the area, planning to start cutting back the climbers over the weekend. Sigh! 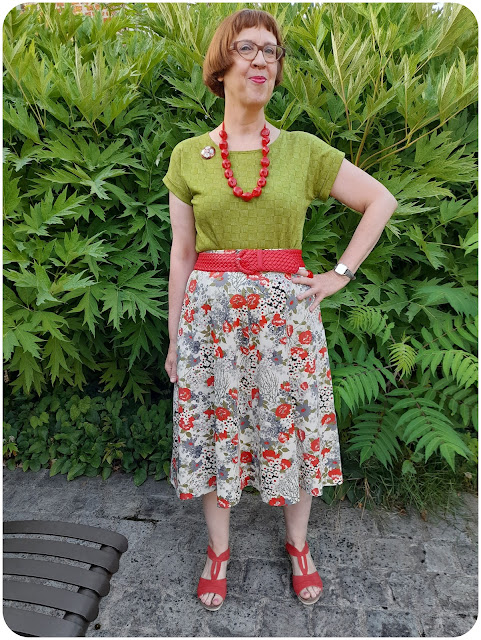 It was back to work on Friday, when we were treated to sunny spells with the mercury stuck at 22°C.
After wearing dresses all through the week, Friday's outfit was a skirt and top combo featuring old and new items, their common factor being they were all second-hand finds, apart from my sandals.
The green top with its pattern of eye-confusing squares was charity shopped on a particularly successful day in July  2021, while the skirt was a more recent buy, snapped up from a vintage-per-kilo shop in Antwerp back in April. My necklace and woven belt were charity shop finds ant the enamelled brooch came from a flea market. 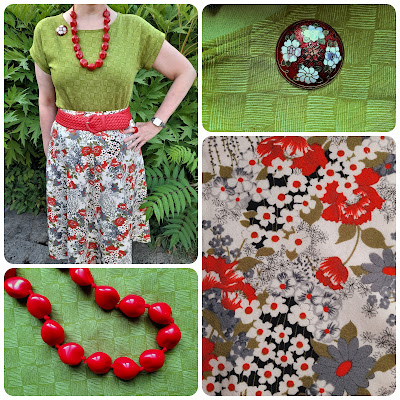 I remember going for a walk during lunch break that day, visiting Think Twice and a couple of other vintage and second hand shops and buying ... absolutely nothing! Quite possibly, my heart wasn't in it with all these garden woes!
In fact, it was (and still is) all I could do to stop myself from crying whenever I caught sight of the sorry state of affairs outside. And it was going to get so much worse ... 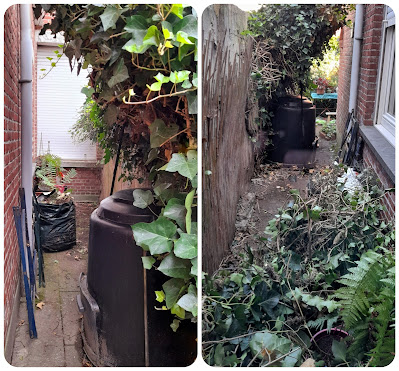 We cleared most of the ivy on Saturday morning, only leaving the arch of ivy and climbing Hydrangea over the compost bin, which our neighbour said he would get rid of. But not without complaining about the amount of greenery later on. 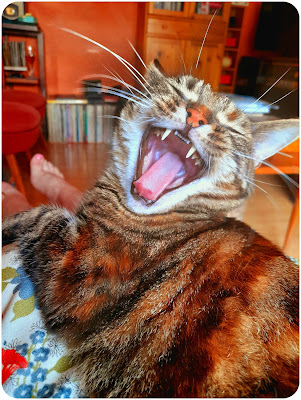 We, on the other hand, have been forced to look out on to a mountain of rubble in his garden from our bedroom window for years. Yes, Bess, those are my feelings exactly! 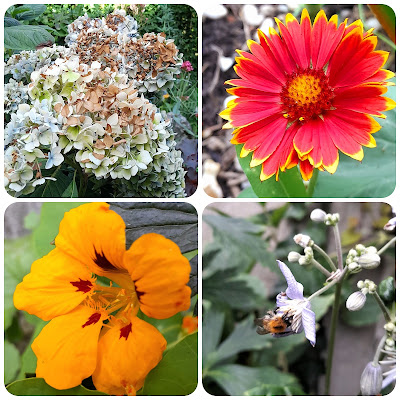 While I was still in my gardening gear, I planted out our Gaillardia "Kobold" (top right) which wasn't doing very well in its pot, and seems to be much happier now.
The heatwave, however short-lived, had burnt our Hydrangeas to a crisp, but the uninvited Nasturtiums (the offspring of last year's) carry on producing blooms regardless. As does Clematis jouiniana 'Mrs Robert Brydon' (bottom left), whose tiny pale lavender flowers are a magnet for bees. 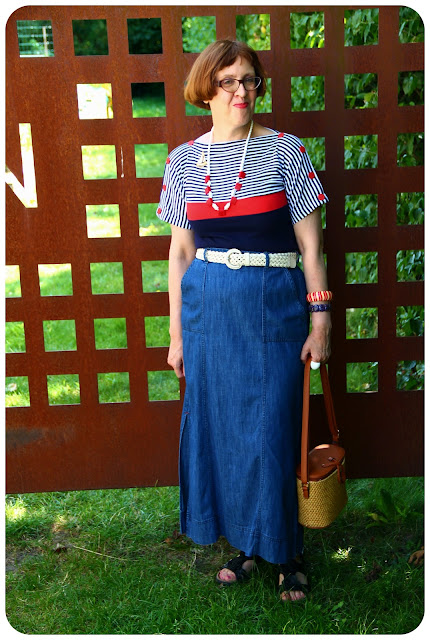 After lunch, we declared that we needed a reward for the morning's efforts, so I changed out of my gardening gear and we went for a rummage.
The main ingredients in my outfit were picked up in the UK. Having been on the lookout for a denim maxi skirt for ages, I finally found what I was looking for in the Shropshire Cat Rescue charity shop in Shrewsbury in June. The deadstock 1970s top was bought in Cardigan in June 2017. The latter, by the way, had also been on my flea market stall, but I realized my error of judgment just in the nick of time! 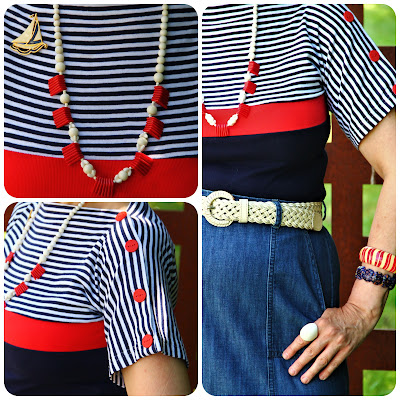 As usual, it were the charity shops and flea markets which supplied my accessories. I snapped up the Clarks sandals - up there with my Cloudsteppers for comfort - in the sales in a Shropshire town back in 2018, and my handbag was a cheeky high street buy a couple of years ago. 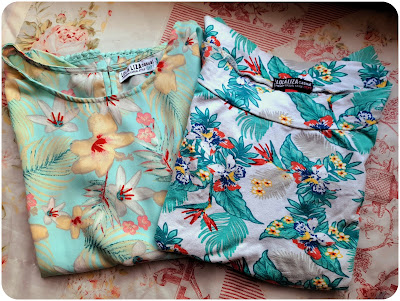 We'd originally planned to visit two shops, but then we ran into my friend Inez in the first one, and ended up catching up over cups of coffee in the on-site cafeteria.
It had been ages since we'd rummaged together, so that was fun too, pointing out hilarious stuff to each other just like we did back in our pre-Covid Think Twice shopping afternoons.
Picking weren't too great, but I still managed to find these two floral Summer tops, coincidentally originating from the same Belgian high street shop Lola Liza ... 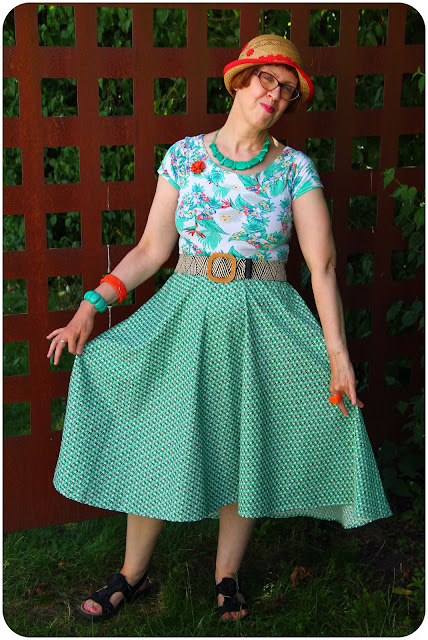 ... one of which I already wore on Sunday, when we once again left behind the moderate mid-twenties for 30°C.
Finding a companion for it was a doddle, as this hand-made green cotton circle skirt with its tiny white checks and red dots couldn't have geen more perfect.
I ended up feeling cool and collected all day, although admittedly I didn't do all that much. Having wistfully pottered around the garden and filled a bag for the charity shop, I flopped down on the sofa with my latest read. 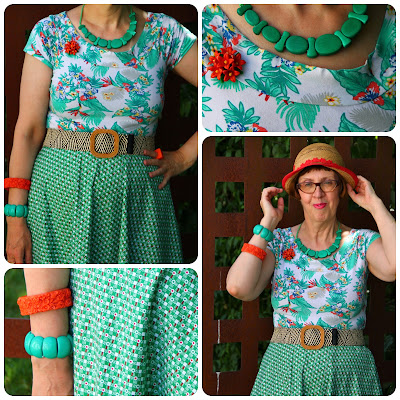 Before I go, here's a look at my accessories, which include one of my stretchy chevron patterned belts, a green wooden necklace by Belgian label Les Cordes, charity shopped in 2020, and a brooch, bracelet and bangle, which were all flea market or charity shop finds at one time or another.
Oh, and the hat, although brand new, was found on a flea market as well.
I'll be back with the final installment of my travelogue shortly, that is, when the ongoing building noise allows!
Posted by Polyester Princess at 19:52