Of sheep and hills

In the weeks leading up to the holidays, I'm having recurrent nightmares, in which I've accidentally left my camera at home, giving some indication as to how important taking photographs is for me.

In the old days before blogging, I would now be clicking through my photos in preparation of creating a digital scrap album as a reminder of our holiday, which I stopped doing about two years ago when it transpired that my favourite online software was no longer available.

Before that, in the even older days, I'd be eagerly waiting until my precious photos - rolls and rolls of film - were developed, after which I'd be wielding real life scissors and glue for the messy business of making an actual album, which would include anything from entrance tickets and leaflets to candy wrappers.

Do I miss these days? Yes, and no!  I do love having the albums to browse through once in a while, but at this point in my life, I prefer to use my blog as a well documented travelogue.

As I already gave you Chapter 2, let's get back to the beginning, shall we? 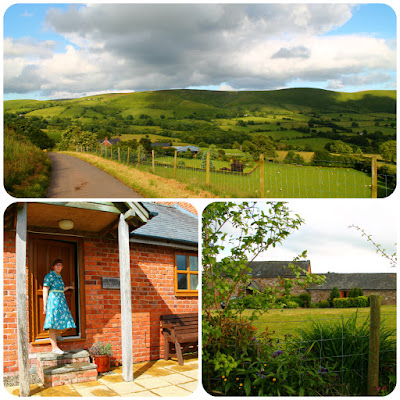 We arrived at the cottage which would be our home for the next two weeks a bit earlier than planned, as our journey had been completely without hick-ups.

Byre Cottage, where once cows sought shelter from the elements, is part of a huddle of farm buildings nestling in a valley between the Long Mynd, a large, long heath and moorland plateau that forms part of the Shropshire Hills, and Adstone Hill.

Adstone, as the handful of buildings is called, is reached by the narrowest of hedged country lanes, and is about one mile from the nearest village. It is also about half an hour's drive to the nearest supermarket. Reportedly there should have been a village shop for essentials, but we didn't make the effort to find it. 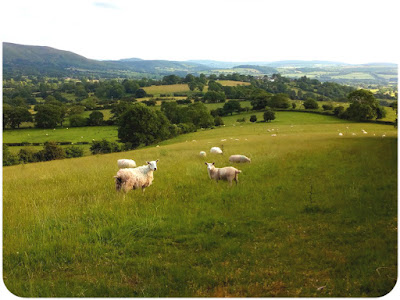 Apart from our landlord, a friendly but rather timid man whom we hardly ever saw, our nearest neighbours were the sheep which grazed the hilly fields surrounding our cottage, their melodious bleating a soothing soundtrack.

Having spent so many holidays in our Welsh cottage, it was only natural that our new abode would be held up for comparison, but I can tell you that Byre Cottage compared favourably, especially as it was more spacious and generally better equipped. 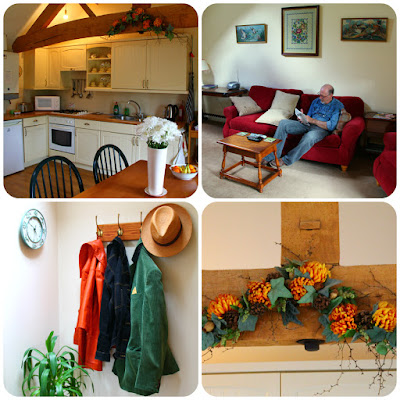 There was room to swing a whole army of cats in the kitchen/dining room, which led onto a small terraced area outside, with seating for two. Then there was our bedroom, which had a wardrobe with plenty of hanging space, and which did not contain an ordinary bed but a four poster! 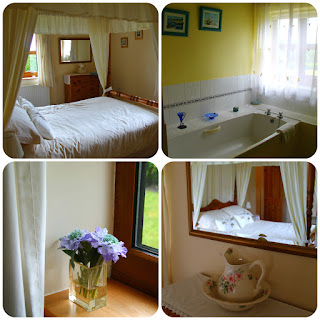 After we'd made ourselves comfortable and had a meal, we went for a little walk up Adstone Hill, soaking in the quietness and magnificence of our surroundings. 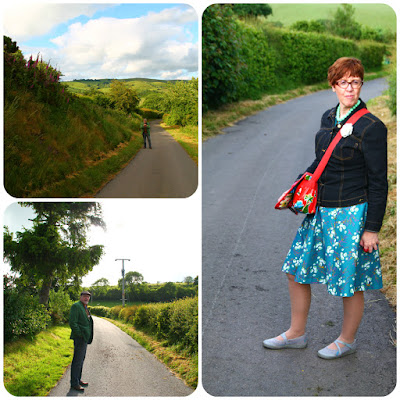 When we woke up the next day, Sunday, it was to solid grey skies and a bit of drizzle. As we couldn't wait to get started, this was a bit of a disappointment, but never mind.

First it was time for a proper fry-up, as Jos is a dab hand at making English breakfast.

Thus fortified, we were ready for our first adventure: we decided to explore the small town of Church Stretton, about 12 miles away, on the other side of the Long Mynd. 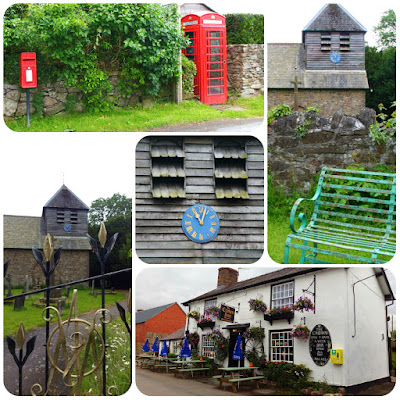 Along the way, we passed through our nearest village, a tiny place called Wentnor, which has a pub, a pretty little church and a red post box keeping a rare red telephone box company.

After skirting the Long Mynd, we arrived in Church Stretton, where we parked and paid for a ticket, minutes later realizing that parking was free on a Sunday. Typically, the silly machine didn't complain when we put in our money! 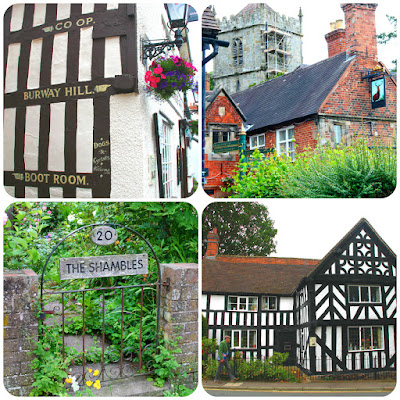 Soon it started raining again, so we escaped inside Stretton Antiques Market, situated in an early 1900s red brick warehouse, where we browsed the stalls laid out over several floors. 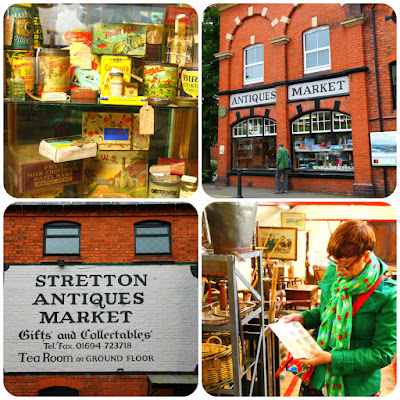 Nothing really took our fancy, but as it was lunch time by then, we made use of the on-site tearoom. 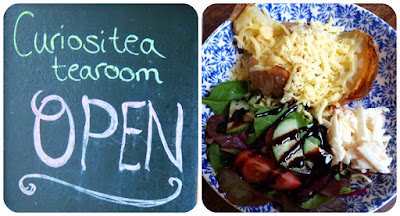 If at first there seemed to be a break in the clouds, they had now gathered to create a solid grey blanket and it wasn't long before the showers turned into a steady curtain of rain.

The town's charity shops, which mercifully were open on a Sunday, offered some respite, and our first purchases were made.

While Jos found a straw hat, I came away with a Phase Eight raincoat, two brooches and a vinyl case from a range Celia Birtwell designed for Boots in 2009. 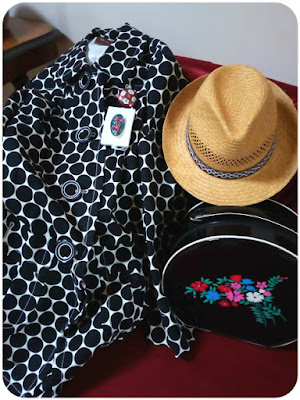 Ditching our plans for a short walk, we then dived into a café for coffee and cake, after which we decided to call it a day and return to our cottage. 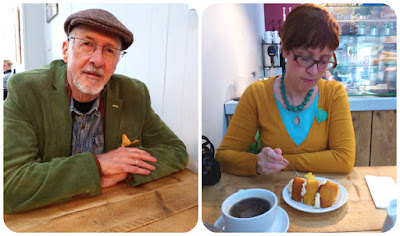 Setting our satnav for the return journey, we were mystified when the blasted thing made us drive in the other direction. When we started climbing and then bumped over a cattle grid, I knew we were in for an adventure of a different kind. Instead of skirting the Long Mynd, we were now driving right over it.

With the rain and low-hanging clouds diminishing our view, we continued our precipitous ride on a one-track lane which climbed ever higher until, thankfully, it swerved away from the sheer drop on our right, at which point I quickly hopped out to take some photographs with my phone's camera. 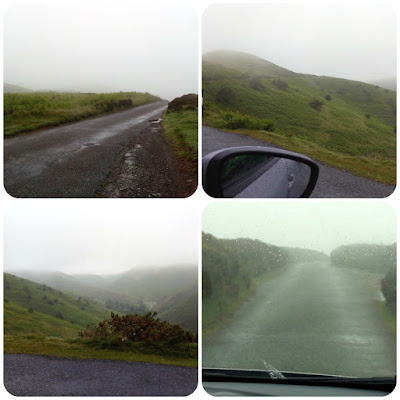 We thought we'd seen the worst, but how wrong we were! Suddenly there was a hairpin bend and the road started going downhill at a rather alarming angle, again with a steep drop on our right. As if that wasn't bad enough, a car suddenly appeared from the opposite direction. Obviously there was no way we could pass each other, so Jos made several attempts to back the car uphill. It comes as no surprise that I, a long time sufferer from vertigo, was getting a panic attack. In my mind's eye, I could see our car making a tumble over the edge, in which case I would never get to meet Vix and Lynn ...

But all's well that ends well. The other driver eventually took pity on us, and swiftly backed his car  downhill to a passing place, so that we could continue our journey unharmed. Phew! 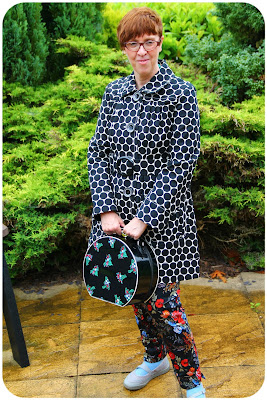 Needless to say, we made it safely back to the cottage, where I insisted on posing with my new found treasures in the rain.

That raincoat really was the best buy ever, as the weather gradually started improving once I'd bought it. Nevertheless, I'm taking it, and my floral trousers to Patti's Visible Monday at Not Dead Yet Style.

But more about that in my next travel posts!