Instructions for a heatwave

I can't believe we've been back from our holiday for two and a half weeks already!

If it weren't for the fact that I'm still reliving it by blogging about the things we've done, our holiday would by now be a distant - albeit gold-framed - memory!

The weather had been even hotter here than in the UK, so that we returned to a house with a bedroom which felt like a sauna and a garden that had clearly seen better days.

The birds had stripped our white currant bush of most of the translucent pink tinged fruits, but we were able to harvest a bumper crop of ruby red gooseberries just in the nick of time. 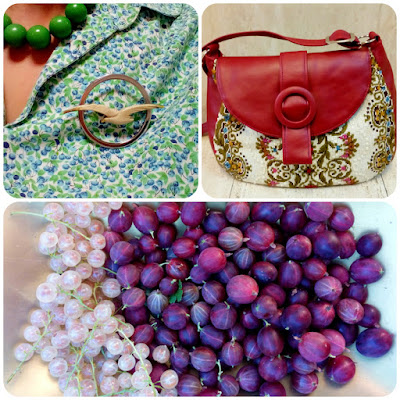 I had to go back to work almost straight away, after two days of frantic unpacking, doing several loads of washing, catching up on my blog reading and churning out my first holiday post.

My first day back at the office could have been frantic as well, but I was quite unfazed by the chaos awaiting me after the relaxing holiday we'd had. Plus, I was wearing Vix's brooch pinned to my light cotton frock, which acted as a kind of armour, as it reminded me of the time we spent together.

I also switched to a new work handbag. Not that new actually, as I'd already snapped it up at Think Twice months ago. It's deadstock, in pristine condition, and roomy enough to stash away all my paraphernalia, including my much-needed pair of sunglasses, which my old handbag didn't have room for. 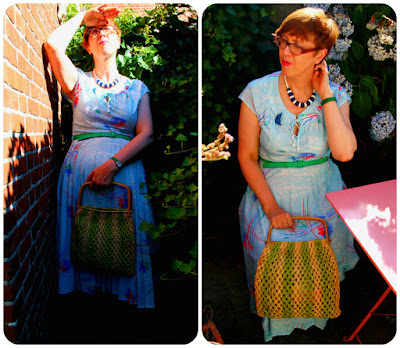 Posing in the glare of the sizzling hot July sunshine doesn't make for the best of photos, but I was determined to show you some of the outfits I've been wearing. Unfortunately, this could only be done after work, when the sun in our back garden was as at its brightest, bleaching out colours and casting unflattering shadows.

First up is this ethereal dress, which provides an elegant silhouette with its longer length and pleated skirt.

You can have a closer look of it here.

I'm surprised it was still looking quite fresh after a day at the office and my commute on a hot, stuffy tram, where I'd tried to keep relatively cool by frantically waving my fan. Other people were doing the same, but using a variety of papery items they happened to be carrying. I was intrigued to see one man using a flyer with a photograph of Nick Cave by renowned photographer Anton Corbijn, who is currently having an exhibition of his work in Antwerp!. 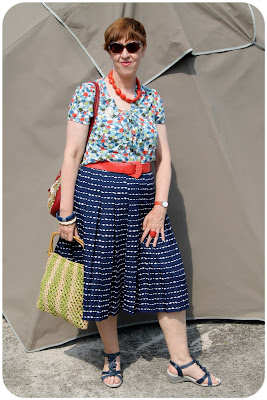 Fast forward to Friday of my first week back, when I was wearing separates for a change. The lightweight box-pleated skirt was picked up at Think Twice last Summer. The King Louie blouse, equally lightweight and adorned with a bow tie, was charity shopped, as were the bangles, beads and sandals, while the mother-of-pearl brooch was a flea market find. 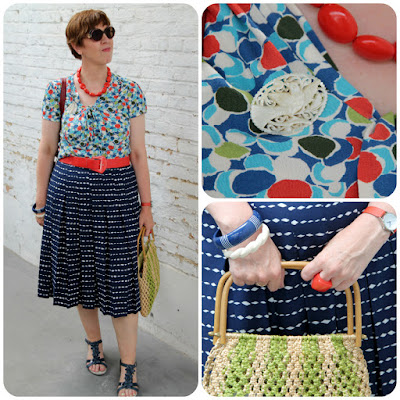 I've had the raffia bag, which also came from Think Twice, for many years. It's my current bag of choice for carrying my packed lunch, some fruit and a drink to work. 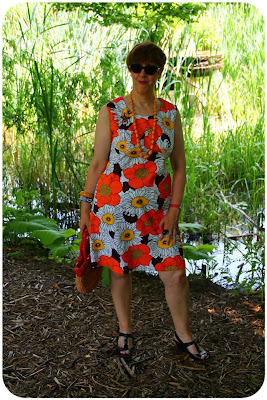 It was too hot to do anything much on Saturday, but wilting away inside the house wasn't an option either.

We hadn't been to the park since May, so that was our destination settled, going for a little walk to see what had changed.

Hemerocallis and Inula helenium were out in full force, but I gave it my best shot to compete with their fiery colours. 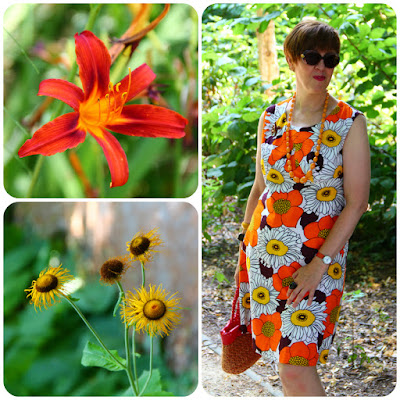 The sleeveless shift dress, in a waffle fabric, came from a long-gone vintage shop.

I made a beeline for the same dress in green at a flea market back in May, but as I couldn't try it on, I left it behind thinking it would be too tight. I've regretted not buying it ever since, as it turns out it was exactly the same size as this one. And it was only € 6 to boot! I know, I can be quite silly at times. 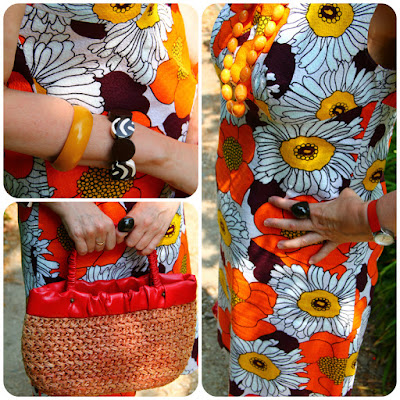 The wicker and leather handbag was bought in Wales two Summers ago and while I can't remember where the yellow beads and plastic bangle came from, the chocolate brown and white bracelet was bought on a charity shopping spree in Wellington, Shropshire last month. 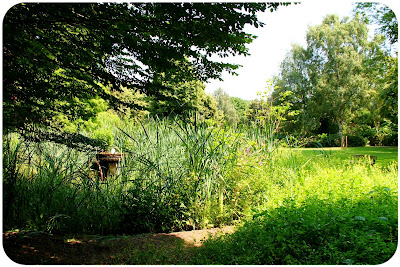 After being out of action for a while, they'd reinstated the ornamental stone fountain and, even though it is still somewhat in disrepair, it was nice to hear water tinkling and gurgling again, providing some imaginary coolness on this hot day. 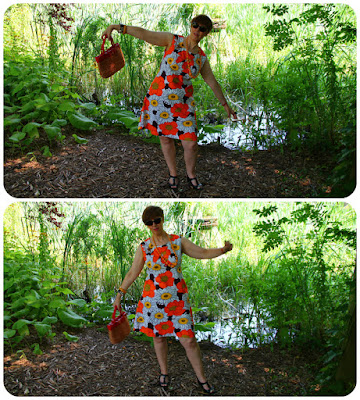 This prompted me to do a little dance (as one does), and then I had to do it all over again, as Jos wanted to catch the silliness on camera. 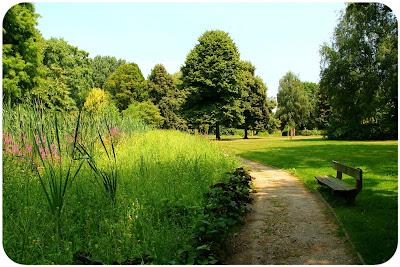 I love the contrast between the manicured lawn on the right and the abundant wildflower meadow on the left but, even though all is looking quite lush at first sight, the effects of the relentless heat of the sun and the lack of rain are clearly starting to show. 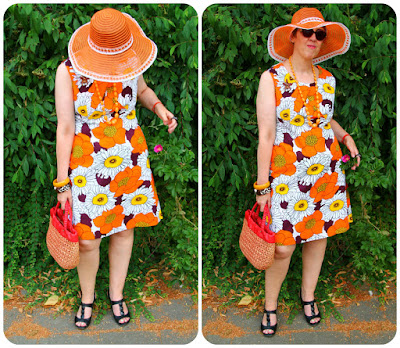 Our favourite charity shop is just across the road, so we went for a brief rummage. What are the chances of finding a Summer hat in a colour coordinating with my outfit? Weirdly enough, there were two of them, hanging side by side.

A lady was admiring my hat, adding that it would go with a dress she'd just bought. When I pointed her in the direction of  its twin, she declined, saying that her neighbours would think she'd gone mad if she started wearing a hat. Some people! 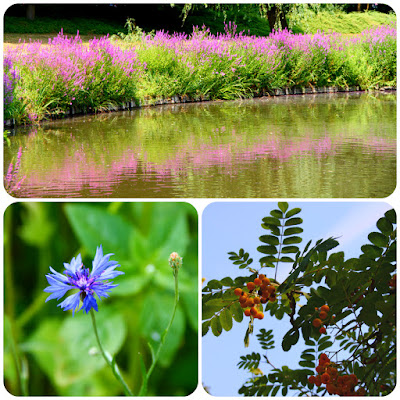 Me, I'm just following nature's example. I'm such a magpie when it comes to colour. If people think I'm mad, then so be it. I'd much rather be considered mad than invisible. 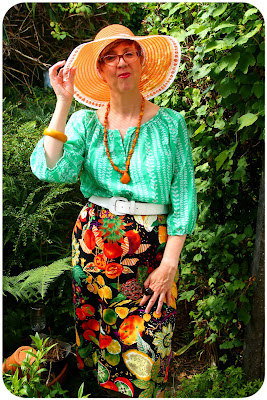 Of course, the hat wasn't the only thing that caught my eye.

With the weather forecast showing no mercy from the heat, I'm in need of some colourful cotton tops to wear with my summer skirts. I knew that this particular shop would not disappoint, and I was right.

This loose-fitting, peasant style blouse was a no-brainer, with its fresh green colour and subtle white flower print with a hint of orange. 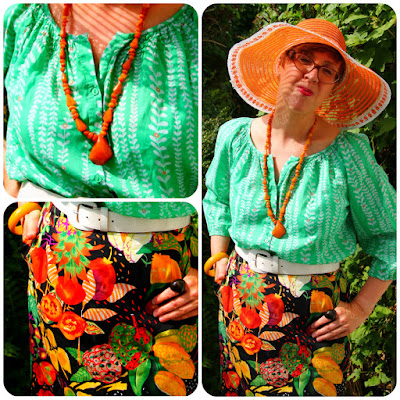 I wasn't looking for another skirt, but how could I possibly pass up the opportunity? This rather exotic fruit print midi skirt, in a crisp, lined cotton, was only € 4.

There, I'm dressed, for under € 10: isn't charity shopping the best?

In my next post, I'll be continuing my travelogue with another visit to a Welsh property and a significant improvement in the weather.

Posted by Polyester Princess at 19:12