Under a stormy sky

In my previous travel post, I left you while sitting on the balcony of our cottage with my poppy umbrella, wondering if I wasn't tempting fate.

Sure enough, when we woke up on Tuesday morning, the sky was a solid grey.

We'd only made vague plans for our holiday, taking every day as it came, except for a visit to the seaside to do a particular walk.

With the forecast for the rest of the week being even vaguer than our plans, we decided to take the plunge and go ahead regardless of the weather. 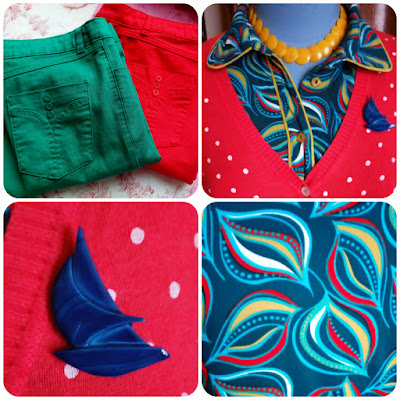 With that in mind, I wore my red trousers again. Sick and tired of my dark denim ones, I'd bought two pairs of trousers, in red and green, at the outlet shop of Belgian brand Who's That Girl in Antwerp. 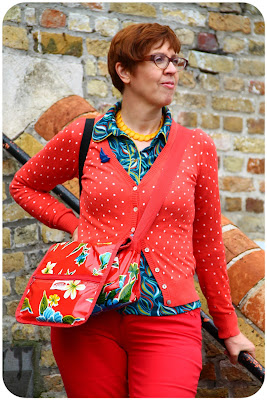 This time I paired the red trousers with a long-sleeved shirt, originally from the high street (from a label called Zoë Loveborn), but found at a flea market. On top, a charity shopped cardigan, in orange red with white dots. So, nothing vintage, apart from the brooch and necklace. As a nod to our seaside visit, I chose a blue sailing boat brooch!

On the long straight road leading up to De Panne, the nearest seaside town where we wanted to make use of the free car park, the sky was getting darker and darker, and by the time we arrived it had started to rain quite heavily. 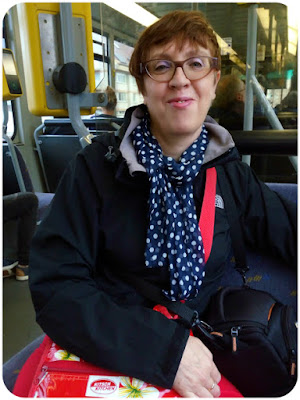 So, out came the boring Goretex, which I'd hoped I wouldn't need, and waited for the tram to take us to Nieuwpoort.

The tram along Belgium's coastline is the easiest way to get around and a bonus is that I can use my regular public transport pass.

By the time we hopped off at the quayside in Nieuwpoort-Stad (town), it was dry, so we walked to the town's main square, being treated to a brief shower along the way. Yes, it was going to be one of those days! 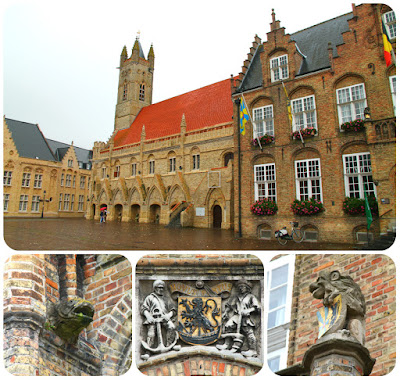 We's visited the town a couple of years ago but the many ongoing restoration works rather spoiled that visit. Now, we could admire the buildings surrounding the market place in their newly revealed glory.

Like Ypres, most of the historic town was in rubble by the end of the war, but here too a great job was done in painstakingly reconstructing the town's heritage. 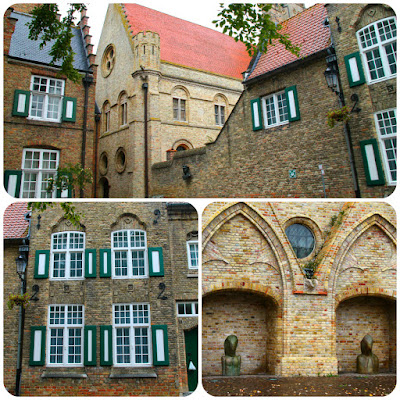 There was a temporary art trail throughout the town, and works of art were dotted in every available space. 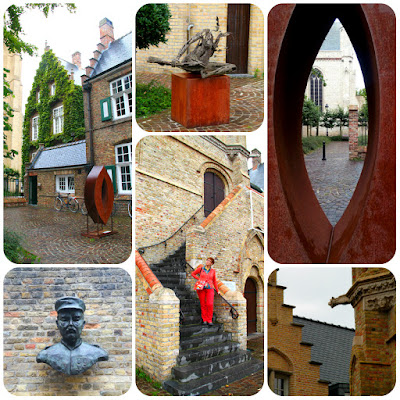 Nieuwpoort is located on the estuary of the River IJzer, and it actually has two centres, the old medieval centre, Nieuwpoort-Stad, which we'd just visited, and the coastal resort of Nieuwpoort-Bad.

They are connected by a delightful 2 kilometers long traffic free promenade along the harbour channel, which we'd walked on a sunny day back in 2015. 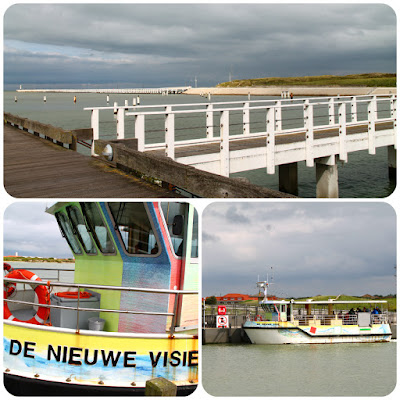 After lunch, a short tram ride took us to Nieuwpoort-Bad, where we made our way to the end of the promenade and the free ferry service which shuttles you to the east bank of the harbour channel.

There is a nature reserve, De IJzermonding, along the estuary of the River IJzer, which is the only river in Belgium flowing directly into the North Sea.

We first walked down to the deserted sandy beach, which is part of the nature reserve, and which looked particularly striking against the brooding sky. 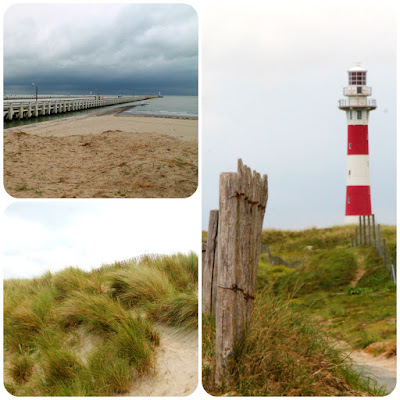 The white railings of the eastern jetty, a 500 m long boardwalk into the North Sea, added to the eeriness of the seascape, the almost black sky contrasting starkly against the transluscent colour of the sea. 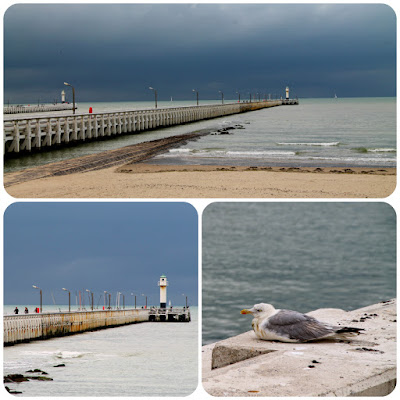 White sails seemed to be gliding like swans through the harbour entrance between the eastern and western jetties towards the wide expanse of the sea.

The crashing of the waves was competing with the strangely echoing sound of the amplified announcements coming over from the western side, where a cycling race was about to take place. 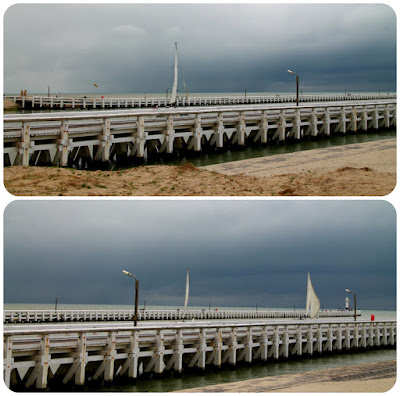 Exhilarated by the salty North Sea air, and accompanied by yet another shower, we retraced our steps and walked along the designated paths through the reserve, back towards Nieuwpoort-Stad, a menacingly barbed wired military domain on our left. 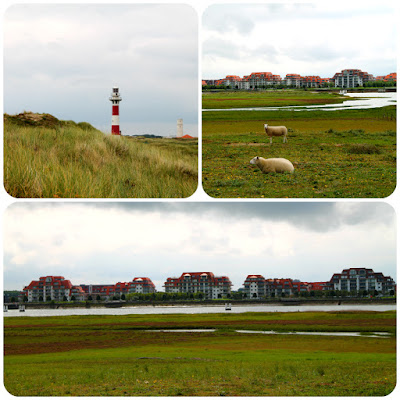 Every so often there was a gap with a tantalizing view of the red and white striped lighthouse to our left, while on the right, sandy paths led to viewpoints offering panoramas over the nature reserve, beyond which Nieuwpoort's ugly modern apartment buildings were cluttering up the skyline on the western bank. 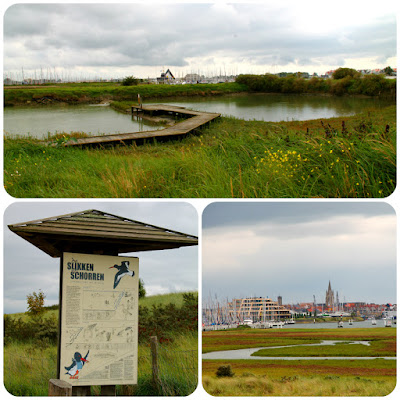 A bird hide invites you to do a spot of bird spotting. It was populated by enthusiasts wielding heavy binoculars and glaring at us when we dared to make a quiet entrance. 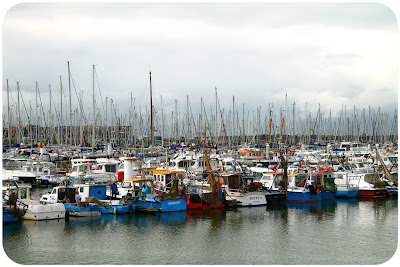 The walk led us around one of Belgium's largest marinas, where all manner of pleasure crafts were anchored, jostling for space, the riot of masts producing a clanging soundtrack conducted by the wind. 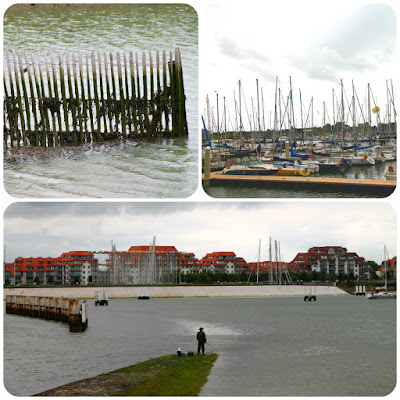 In the midst of it all, a lonely fisherman provided a focal point for my photograph.

Nearing Nieuwpoort-Stad, we spotted the Albert I Memorial, commemorating the heroic acts of the city during the First World War. It was in fact here at Nieuwpoort that the German advance was halted in October 1914, when a sharp-thinking lock-master opened the sluice gates on the river, flooding the area up-river from the estuary, and so preventing the Germans from pushing on to the Channel ports. 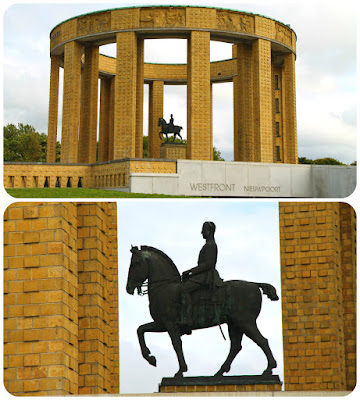 Inside the monument is a museum telling the story of the flooding, and the rampart on top can be visited for a panoramic view over the landscape.

The monument is fittingly placed on the edge of the complex of locks, called the "Ganzepoot" (goose leg), which is regulating the water level of five different rivers and canals. 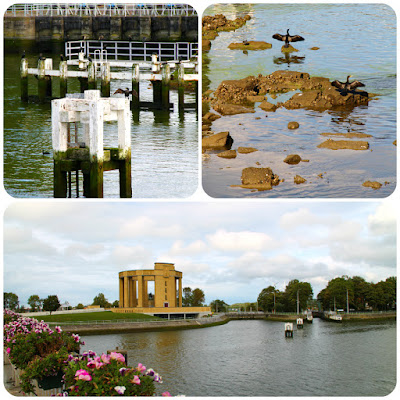 It is also the haunt of a flight of cormorants, drying their wings and realigning their feathers after a spot of fishing.

By then, we'd arrived back at Nieuwpoort-Stad where we waited for the tram to take us back to De Panne.

Linking up to Tina's Pink Friday!

Also linking to Patti's Visible Monday at Not Dead Yet Style!
Posted by Polyester Princess at 17:20