Last Thursday was a public holiday here in Belgium, and as summer finally seemed to be arriving in this part of the world, the day was too good to be spent inside.

We were feeling a little bit lazy: a feel-good, absolutely no pressure whatsoever kind of laziness, so we decided on a leisurely walk after lunch. 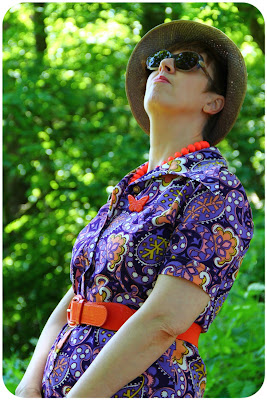 This gave me the chance to road test a pair of light walking shoes which I bought with Wales in mind. While they are not the most elegant of footwear, they were the least showy pair I could find, and the only ones which didn't have those ugly thick white soles. 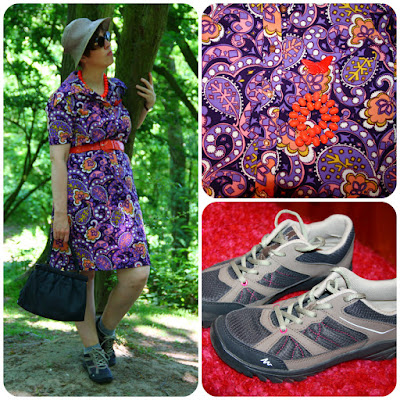 The rest of my walking outfit consisted of a crazily patterned handmade vintage dress, with a very (and I mean very) pointed collar. Its main colour is purple, with splashes of orange, pink, yellow and white. I added an orange belt, orange plastic beads and a red plastic butterfly brooch and, in way of protection against the piercing rays of the sun, a hat bought at a flea market in April, and my prescription sunglasses mounted in € 0,50 charity shopped frames!

We chose my dad's place, a green space surrounding the remains of one of the old forts encircling the city of Antwerp, the one nearest to us, which is only a 10 minutes' drive from Dove Cottage. 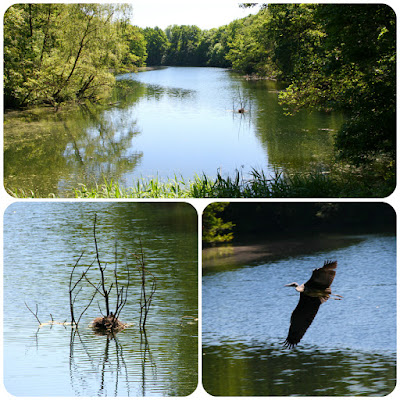 There's a path in the half shade along the moat, from which we watched the abundance of birdlife: a moorhen in its watery nest made of twigs, and a heron in search of its lunch. 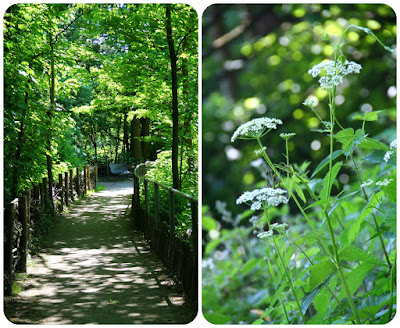 Soon, however, we veered off the main path, climbing onto an elevated tree-covered area, its folds and glades a magical landscape created by the passing of time. 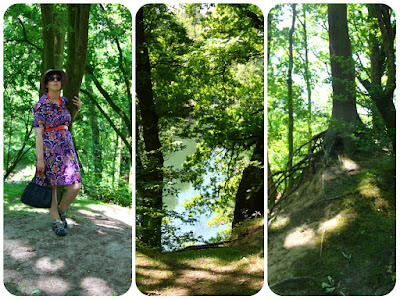 Some of the trees are growing from gnarled and twisted roots, so that they resemble grotesque fairy tale creatures. 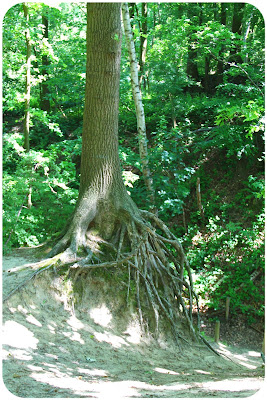 Here, only a few jigsaw-like fragments of blue sky can be seen, and here and there, between the trees' branches, are fleeting glimpses of the moat's tranquil green tinted water. 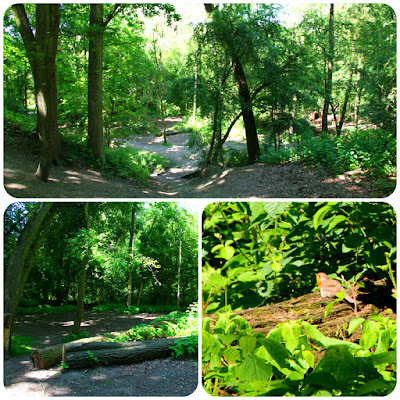 A cheeky robin was watching proceedings from a felled tree in the middle of a clearing. 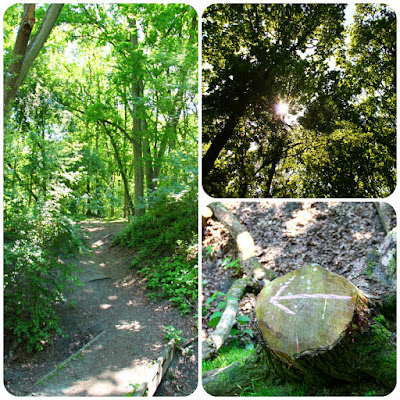 Below, a well-trodden path could be seen snaking through the trees. We eventually clambered down to it and followed its curves until we came to the path leading to my dad's special place. I spent some time in contemplation, inhaling the earthy smell emanating from the layers of decomposing vegetation and finding peace in its never-ending cycle. 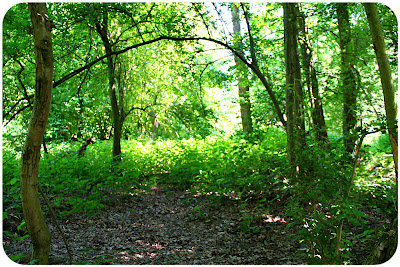 The footpath eventually joined a cobbled path circling the fort itself. 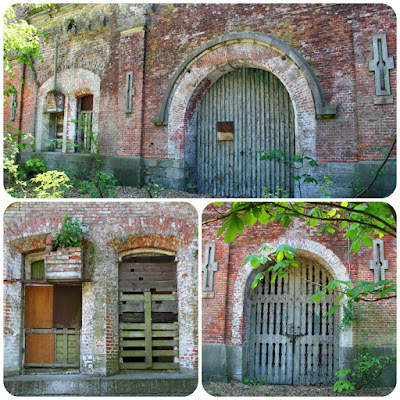 Soon, a long row of low brick and sandstone buildings, in various stages of dereliction and neglect, came into view. The early summer sun filtered by the trees was bathing the buildings in a strange golden glow. 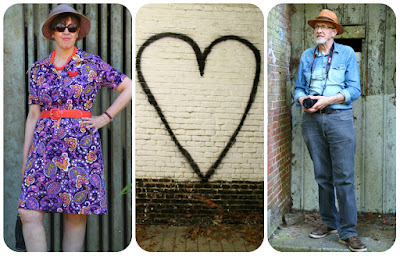 At the main entrance, we disappeared inside the fortress, a not unpleasant scent of dampness and decay tickling our nostrils: a mossy, ferny, rich earthy smell. 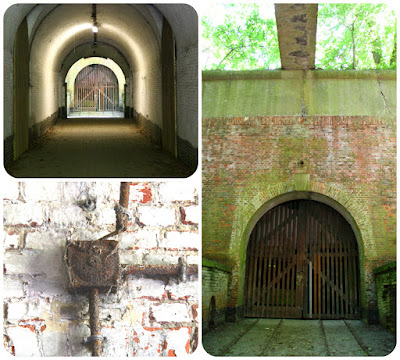 The air has a hushed quality here, as if oblivious of the passing of time. 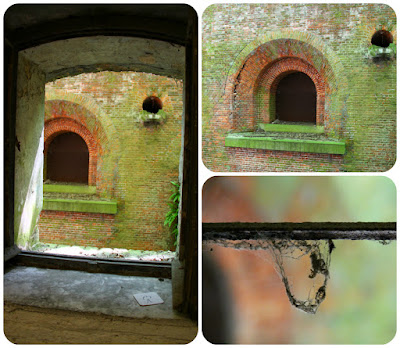 Eventually, we resurfaced onto the path at the water's edge through a low, narrow, tunnel clad with age-old once-white tiles. 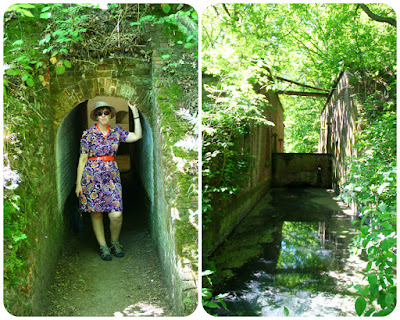 The sun was playing with the surface of the water, and ducks and turtles were sunbathing on overhanging branches, victims of a winter's storm. 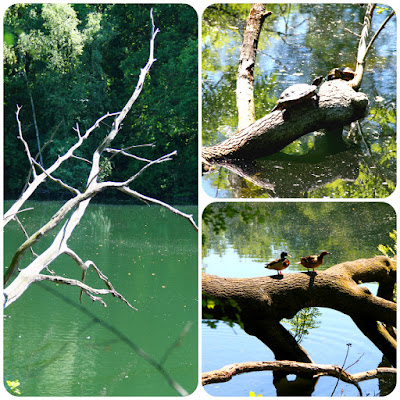 Some are moss and lichen covered, while others have had their bark stripped away by the weather, leaving them twisted and driftwood like.

The hypnotic soundtrack of a lazy summer's day, provided by the droning of bluebottles and the buzzing of bees, accompanied us on our way back to our car, now and then punctuated by sudden bursts of birdsong or a dull splash of water made by fish coming up for air. 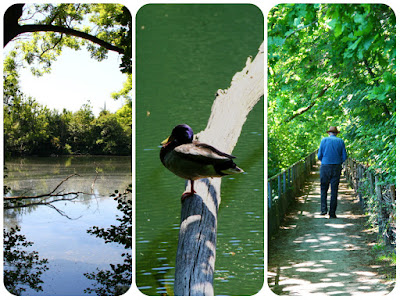 Posted by Polyester Princess at 19:52