Grab your coat and get your hat

As the week progressed, my coats got warmer, until my favourite between-the-seasons coat, which you 've already seen in my previous post, finally made an appearance on Wednesday, staying put for the rest of the week. 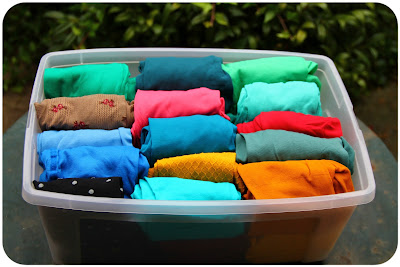 I've also been eyeing my boxful of coloured opaque tights, but decided to upgrade my usual 15 den nude ones to 30 den tights for the time being. I actually don't mind wearing these, so no need to feel sorry for me. If they're old-fashioned, then so be it. 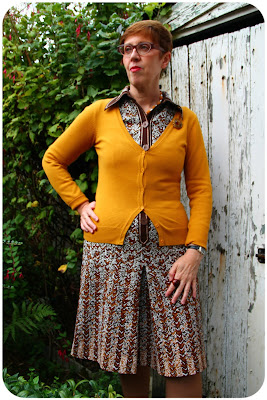 My layering habit really comes into its own this time of year.


It is a necessity, as I need to dress warmly for my commute, but once in the office, and especially after a invigorating walk during lunch break, not to mention the occasional hot flush, layers have to be peeled off. Hence my little cardigan addiction ... 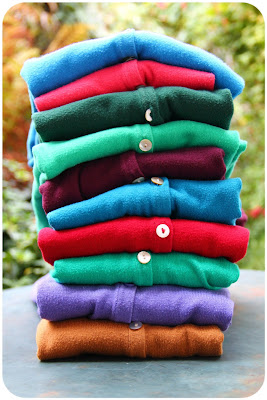 No peeling off of layers last week, though, as the heating in the office was on the blink ... the whole week! I had to make do with a small electric heater, which I put in front of my desk to warm my toes! For that reason, I already reverted to short boots, which I would normally put off for a little while yet.

As I was busy playing the tourist, I only had time for a quick visit to Think Twice, but still managed to find this colourful tablecloth, which is an almost perfect match with the coffee pot I found the weekend before last. 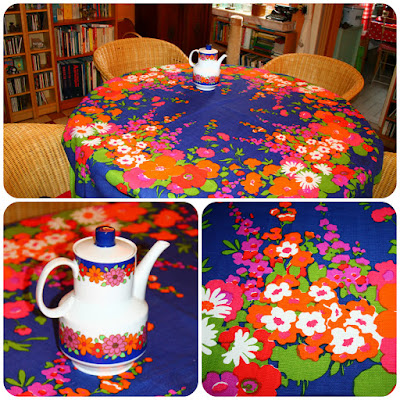 I was aiming for a carefree weekend spent browsing flea market stalls. As luck would have it, there was a small flea market in our village on Saturday. The sun was shining so, dressed warmly against the autumn chill, the weather was perfect for it.

I am in the middle of switching to my winter wardrobe, but it's a lengthy process. Nevertheless, I have a whole section of long-sleeved dresses in readiness, although until now I have been giving them a wide berth, as I didn't feel quite ready yet. It's nice to get re-acquainted with them, especially as there are always some I have forgotten about. But once I start wearing them, there is no going back, and I know I will be wearing them for a very long time ... 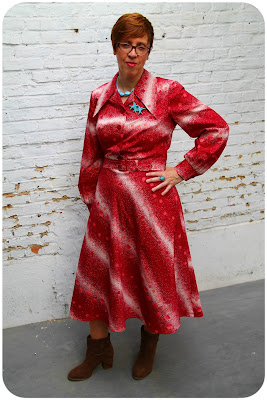 On Saturday I finally succumbed, but I chose a dress in a thin fabric for starters. It's a Merry Finn dress and I quite like its longer length for this time of year.


I decided to accompany it with light blue accessories.

The cardigan brings it all together, as it has a stripe of red at the sleeves' cuffs. 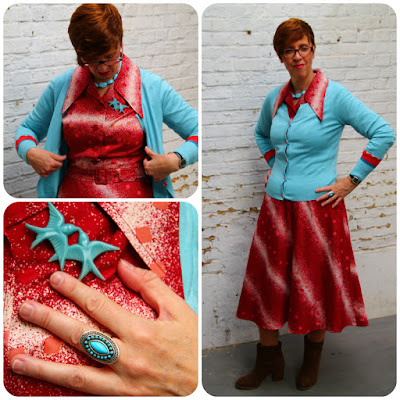 Light blue also appears in this warm jacket. As its boxy shape did nothing for the dress, I cinched in the waist with a light brown shiny belt.

Although I've had the fawn fake suede boots for a couple of years, I haven't worn them very often. They are quite comfortable, especially considering I did a lot of walking in them on Saturday. But they're a nightmare to get into as they are zipper-less, and have to be pulled on with great force. I was reminded of trying to put boots on Barbie's feet ... 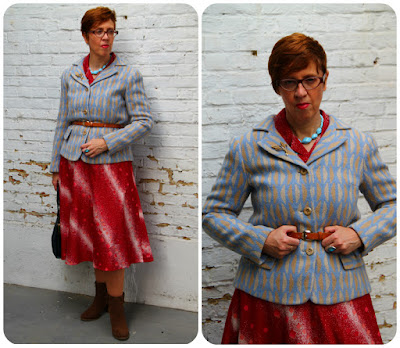 On to the flea market! 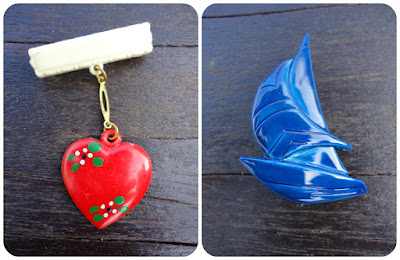 At first sight, it was rather disappointing, but once we rounded the corner and entered the parish hall precinct, we kept finding little bits and pieces, like these brooches. 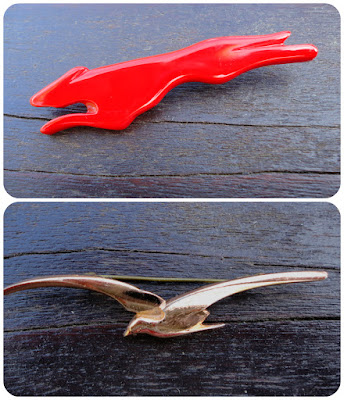 It wouldn't be a successful flea market if I didn't find any brooches, would it?


One of the inside stalls had a whole box of old-fashioned rain bonnets, cutely packed into little plastic suitcases and treasure chests. 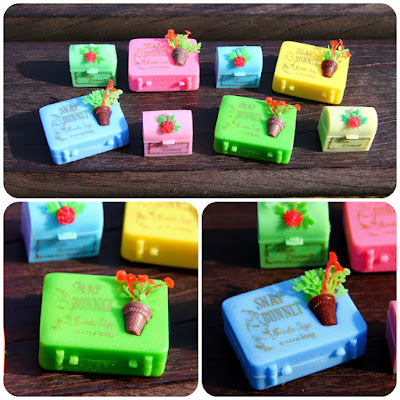 I remember when I was in primary school, one of my classmates had one of those little suitcases, and oh, how I wanted one of my own! 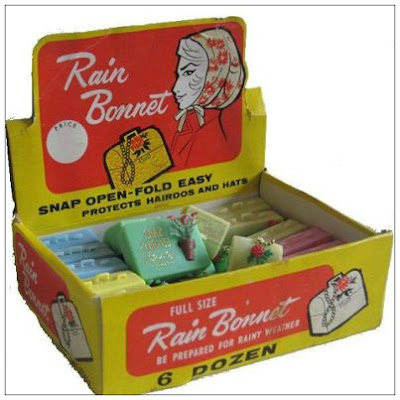 They were € 1 for 3, so we bought them in every available colour. I have seen them priced at over € 1 for just one, so this was a real bargain. They're so endlessly cute! 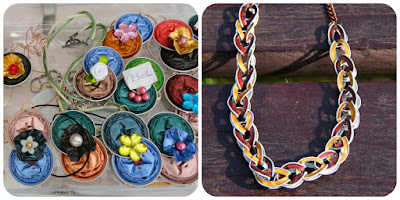 One of my neighbours had a stall selling handmade jewellery. I was amazed when she told me what they were made of. Can you guess? I bought the necklace on the right from her. 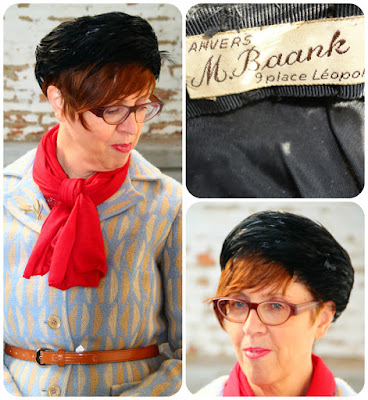 This hat, which is a little worse for wear, with the straw lining disintegrating, was made by a milliner based in Antwerp. This dates back to a time when French was still spoken quite a lot in Antwerp, especially by the so-called better classes. Now, the label would be in Flemish, or at least in both languages. But then again, there are hardly any milliners left nowadays ...

I managed to find a vintage dress too, made from Diolen, and priced at € 3, which I already wore to work on Monday. 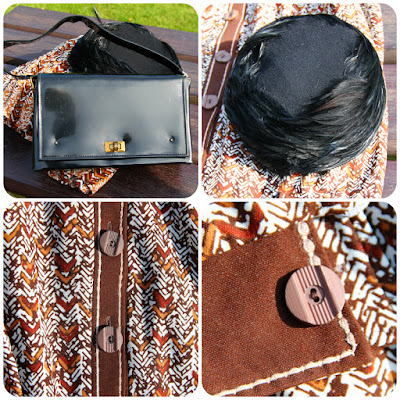 My final purchase was a small black vinyl handbag for € 1.

By now we were half way through the weekend, but there was more to come on Sunday, which I will tell you all about in my next post.

See you next time!

Posted by Polyester Princess at 19:11