But honey pie, you're not safe here

Life's quite a bundle of laughs here in Belgium at the moment! Due to a resurgence of Covid-19 cases, our National Security Council has ordered a drastic reduction of social contacts, shrinking the so-called bubble to just five per family unit for at least four weeks starting today. Shopping is now once again a solo activity and limited to 30 minutes and there are stricter rules for cafés and restaurants. These are just some I cherry picked for you, as I won't bore you with the complex do's and don'ts our country's Security Council have come up with.

But there's more! The Province of Antwerp, where I happen to live, and which has seen a huge increase of cases, is under stringent new restrictions, including mandatory face masks in public at all times and a 11:30 p.m. curfew.

It's not exactly lockdown - as many of us had feared - but as people are actively discouraged to visit Antwerp, it feels a bit as if we are pariahs right now. And all because people - the Covidiots as Goody so aptly calls them - have been acting quite irresponsibly. 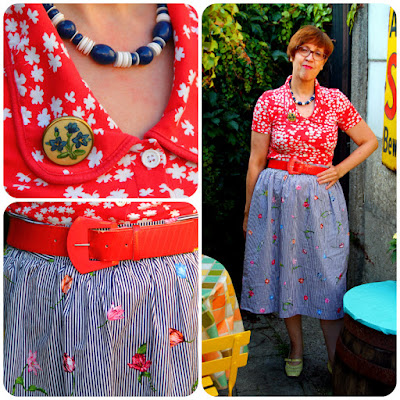 OK, deep breaths. Breathe in, breathe out. And again.

Let's have a look at what I was wearing on Tuesday before last, when we were still somewhat blissfully unaware of what was around the corner.

First wearing of one of the skirts from the never-again charity shop we visited the week before. Originally from H&M, it has an elasticated waist with ties at the front. Quite contrary as I am, I tied them in the back, tucked in the ends and wore a red belt on top. 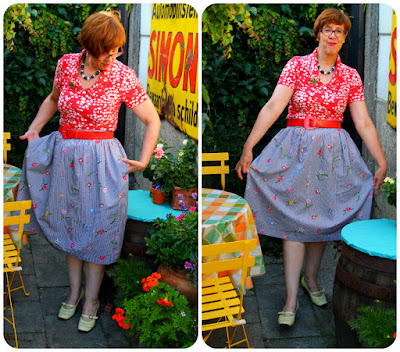 The red and white floral blouse is from the Belgian Wow To Go label, but charity shopped as well. And while I can't remember where the blue and white beaded necklace came from, I know exactly where I found the brooch with its embroidered posy of Gentians. It was part of a haul from a Carmarthen antique centre on a rainy June day in 2018.

The pale yellow Gador shoes were another charity shop find and only worn for the photos. 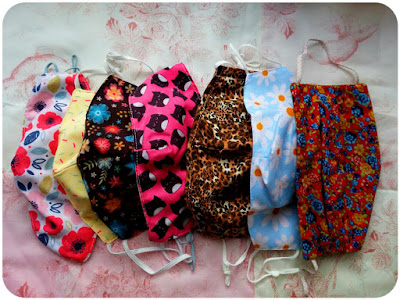 It was Belgium’s national holiday, 21 July, and we didn’t go anywhere, nor did we do very much at all.

After washing the face masks we'd been using that week, I thought I'd offer you a glimpse of part of my growing mask wardrobe. The one on the far right was handmade by Jos's daughter An - there's another one which is not photographed - while the rest were shop-bought. 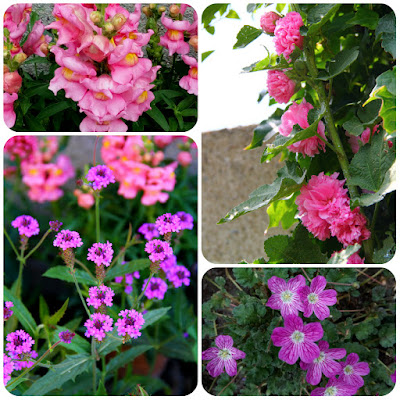 Although the sun had decided to grace us with her presence for most of the day, it was a bit windy and chilly, only warming up towards the evening.

Just in time for my daily watering session and plant inspection. Look at all that gorgeous pinkness and purpleness going on! 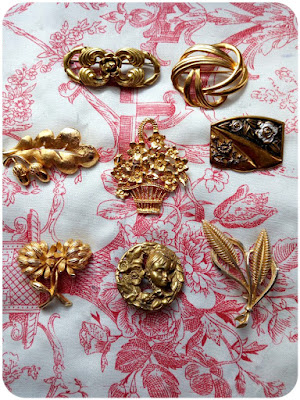 Some of my pottering that day included photographing a selection of brooches for Wednesday's Instagram post. For many months now, I have been treating my Instagram followers to weekly installments of my brooch collection. I might be doing a retrospective blog post for you one day.

Feeling a bit of a fraud for not participating in Kezzie's Bloggers Art Gallery that day, I photographed some of the art we have around the house - which I will be including in a future post - starting with some brooches, which I'm sure can be considered art in their own right. 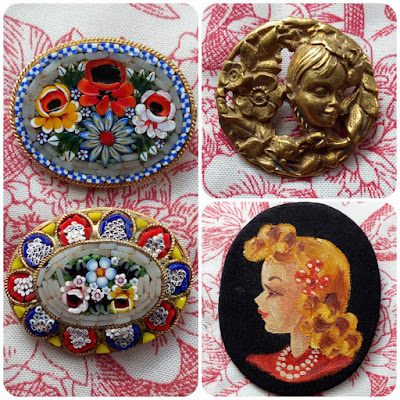 On the left are two of my modest collection of intricately crafted micro-mosaic brooches.

The Arts & Crafts brooch on the top right might be one of my oldest and most cherished, while the 1940s one on the bottom right was hand-painted on a piece of war-time fabric. 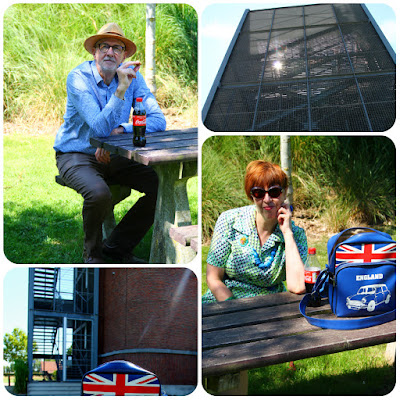 Swiftly skipping Wednesday's office day, the sun was out in full force on Thursday. With the thermostat cranked up to a sizzling 27° Celsius, we intended to enjoy the day to the full and spend it outside and away from home.

After Jos had returned from his hairdressers appointment and subsequent food shop, we made a couple of sandwiches, grabbed a soft drink, and returned to the water tower for an impromptu picnic. 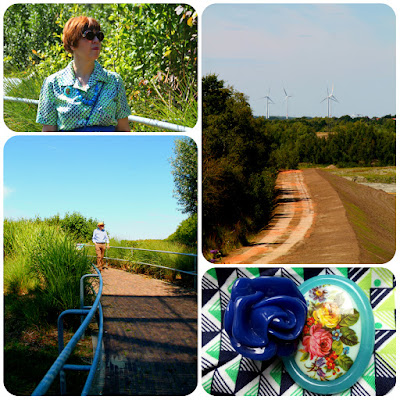 As it was a clear day, we'd planned to climb the steps up to the viewing platform again for a glimpse of the Atomium in Brussels. Unfortunately, we found our plans thwarted by the arrival of a Dad and  his two children, who'd apparently had the same idea. Initially we decided to wait but we gave up in the end as they seemed to be staying up there forever.

Instead there's a quick glimpse of my short-sleeved cotton dress with its funky print of navy, green and lime triangles on a white background. I hadn't been wearing any rings for a while, but I thought my blue plastic flower ring went just perfect with the dress. As it's plastic, there was no need to remove it for hand washing each and every time.  I also added one of my collection of floral brooches. 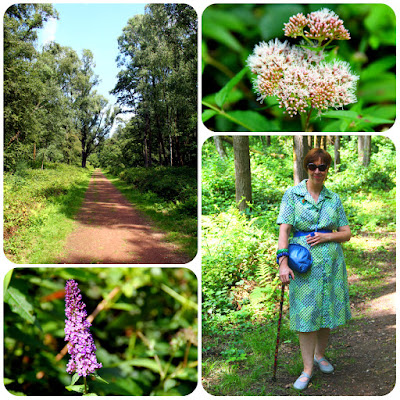 Our picnic was followed by a quick dash to the nearby supermarket to get a couple of things our local shop had run out of.

After dropping off our perishable purchases at home, we drove down to a nature reserve in Niel, a small town about 10 kilometers from where we live. 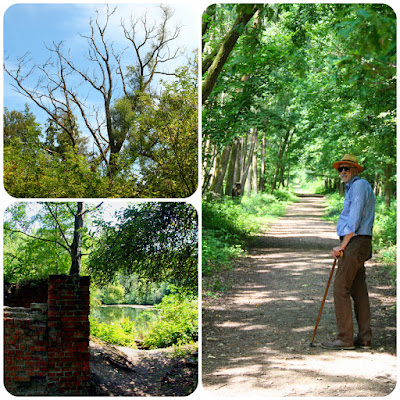 This tranquil wooded domain interspersed with picturesque ponds is another one which was established on some of the former clay pits the area is rich in.

We used to go there quite often until the reserve fell out of grace due to the many illegal fishermen who were often barbecuing their catches at the side of the ponds and leaving lots of litter in their wakes. 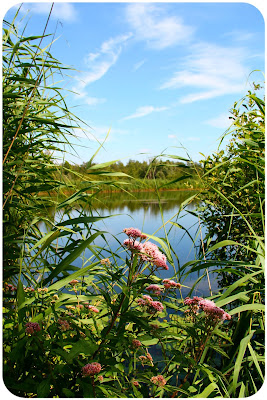 Now, peace and quiet reigned, and we only met a handful of people on our walk, most of whom were walking their dogs. 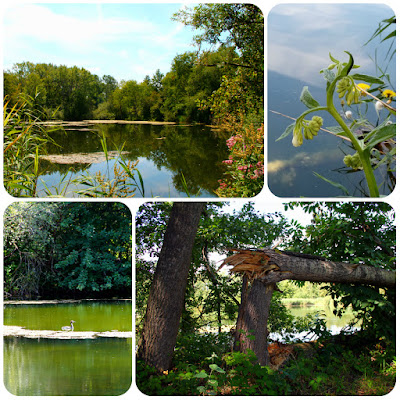 We meandered through the 60 hectare reserve, veering off the main path towards the first of the ponds which lies behind the ruins of one of the former brickwork buildings.

There's a fishing club to the left here, dotted with quiet-as-mice fisherman trying their luck. 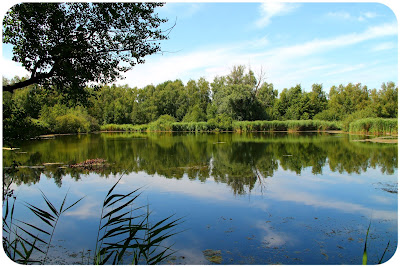 Here, our walk continued along a narrow wooded path, until we came to yet another pond, its surface mirror-like perfection.

Here it's easy, if not to forgot, then certainly to push our perils and predicaments to the backs of our minds for a handful of soul-resetting minutes. 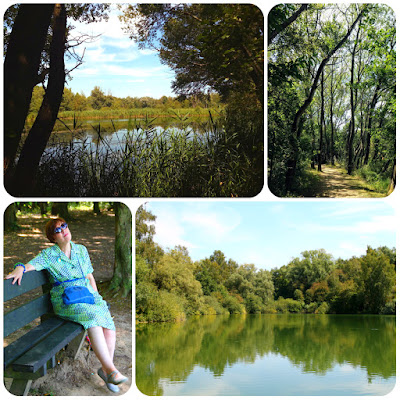 And there were benches to rest our weary feet, or at least dangle them in my case, all with wonderful views to stop and stare at. 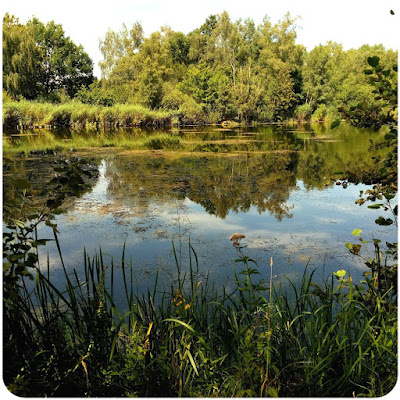 How can a Summer's day be so perfect and sad at the same time?

A relic of the past awaited us at the end of our walk, when we came across one of the little trains which were used to bring clay to the brickworks. Always ready to seize a photo opportunity, I'd climbed aboard and sat down in the little saddle seat before I could think.

It's a good thing we're all carrying hand sanitizer these days! 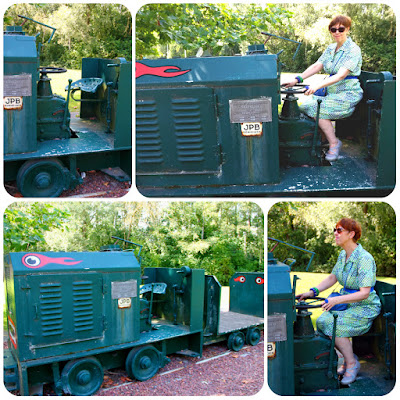 Do be careful out there, and stay safe, my friends!