Farewell to the blue remembered hills

It was the Thursday of our second week and, as our holiday was nearing its sell-by date, we were starting to feel just a tiny bit morose. We could get used to this, we mused. To the peace and quiet, the sense of freedom, the not having to do anything we didn't feel like doing. Oh, I know very well that all good things must somehow come to an end, but it is getting harder and harder each time to leave the good life behind for the hamster wheel of daily life. 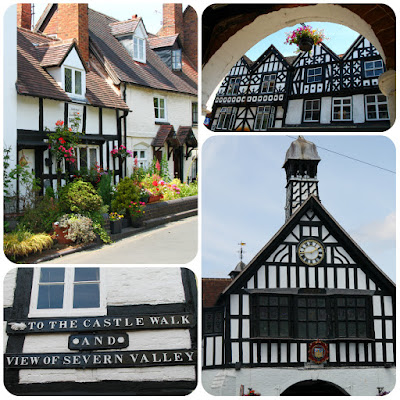 So far, we had been taking each day as it presented itself, often making spur of the moment decisions while having a leisurely breakfast washed down with copious cups of coffee.

This day was no exception, but we lingered a bit longer than usual, as it dawned on us that yet again we hadn't even scratched the surface of what Shropshire has to offer. Having finally come to a decision, it was past 10.30 when we were on the road. The destination we entered into our Satnav was one which might sound familiar. Indeed, we already visited the charming black-and-white and up- and-down town of Brigdnorth on our very first day.

After parking our car, we walked towards the bustling High Street, which features several fine 17th century buildings, including the Town hall (above, bottom right). There's also no shortage of charity shops, but by the time our stomachs told us it was time for lunch, we'd only found a shirt for Jos. 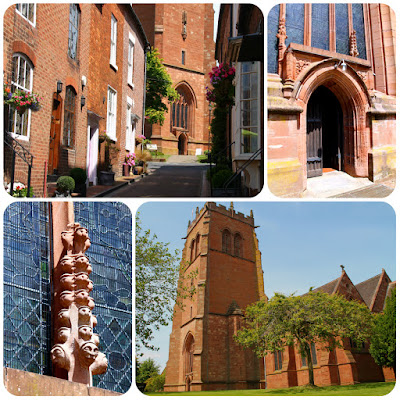 Lunch was had at the local Wetherspoon's - where else - which was packed to the rafters, so that we had a bit of a wait.

Then we ambled around the corner and uphill from the High Street towards the highest point of the town, where St. Leonard's Church is taking pride of place in a peaceful close of its own.

The current church, which is built in the rich red coloured local sandstone, dates from the second half of the 17th century and was extensively restored in the mid-19th century. 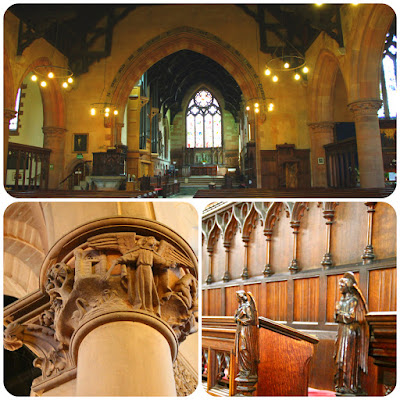 Inside, the church which is redundant and has been designated by English Heritage as a Grade II listed building, has the airiness of a cathedral.

As Bridgnorth is a town with a split personality, and we'd arrived in High Town, our aim was to visit its other half, which rather unsurprisingly is called Low Town and nestles on the banks of the River Severn.

We decided against taking St. Leonard's Steps, leading down from the church close, and just one of a total of seven sets of steps connecting the town's two halves. 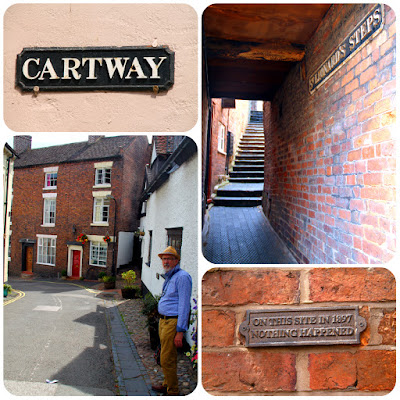 Instead, we took the steep and winding Cartway which until 1786 was the only route between the two and which at one point had some 50 pubs along its length.

A number of caves, which were once used as dwellings, were dug out of the sandstone cliff, their boarded up remains commemorated by plaques. There were plaques on some of the houses too, although not all of them were of historical value! 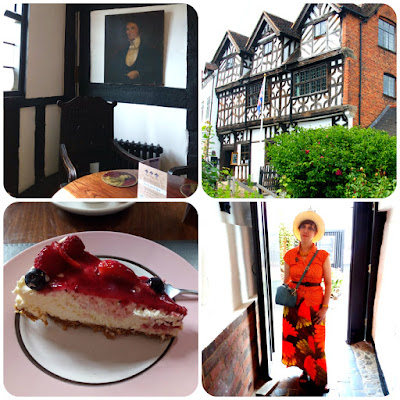 At the bottom of Cartway is Bishop Percy's House, an ornate timer-framed house built in 1580 by wealthy barge owner Richard Forster. It opened as a tea room in 2018, after five years of extensive renovations. Obviously, we couldn't pass the opportunity to have our version of afternoon tea, which included a slice of delicious cheese cake. 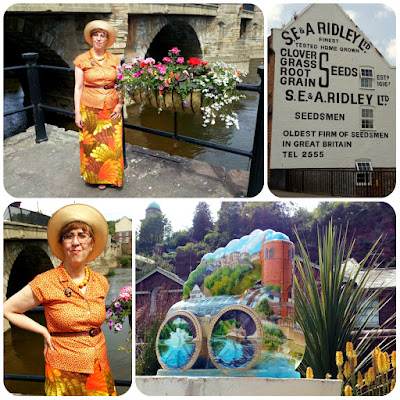 The flower filled quayside in Lower Town was the perfect place to show you what I was wearing on this perfect Summer's day. You've seen it all before: my curtain couture maxi skirt and orange polka dot blouse accessorized with a chocolate brown leather belt and a yellow beaded necklace .

The fiery orange and yellow flowers on the bottom right are trying their best to compete with my outfit but failing miserably. The locomotive artwork in the same photo is called Train of Thought and is part of an Art Trail throughout the town. 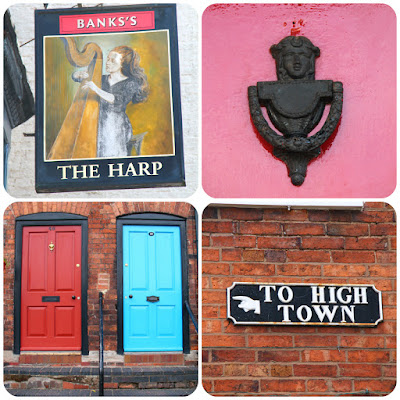 What comes down must go up, but in this case up was quite a climb, so we took the Cliff Railway instead, which only takes a matter of mere minutes. Not for the faint-hearted, though, as it really is rather steep! 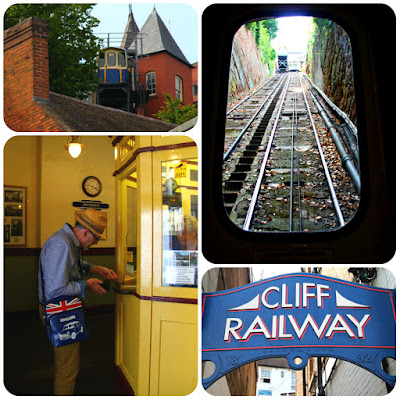 Back on Castle Walk in High Town, we were rewarded by this breath-taking view of Lower Town and the Severn Valley. We took our time to sit down on a bench and stare at the bird's eye view of the  Lilliput world at our feet. 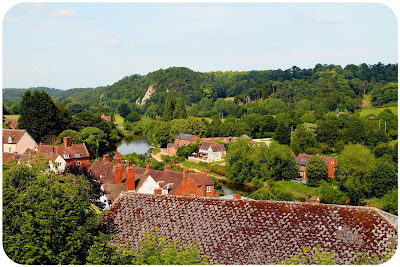 Back at the cowshed, we enjoyed this silky smooth indigo and pink sunset, which was the perfect conclusion of our day. 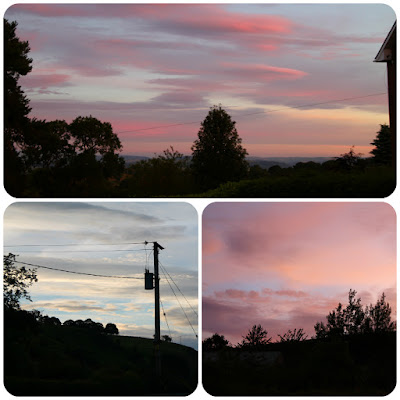 How bittersweet is the last day of the holidays? There's a lump in your throat and your heart feels heavy at the thought that once again, those longed-for two weeks are over.

The blue skies that greeted us that morning spurred us on to make the most of the time we had left, so we packed a picnic and hopped over the border to Wales. 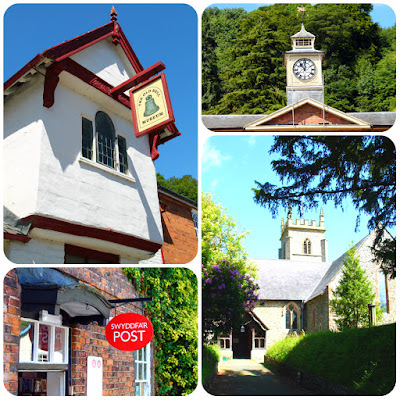 Our destination that day was a small but perfectly formed historic market town called Montgomery, which is set into the rolling Mid Wales Marches countryside.

After posting a letter to a blogger friend at the small post office, we crossed the road to investigage the delightful St. Nicholas Church. 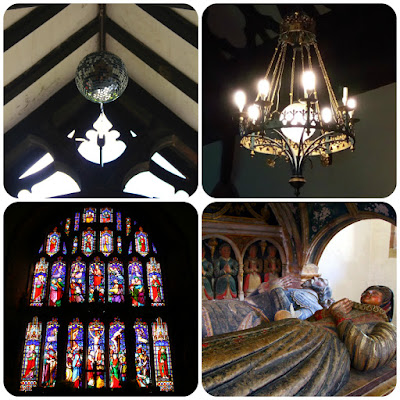 The Grade I listed church has its origins in the 13th century and harbours delights such as beautiful stained glass, a hammer-beam roof and the magnificent 16th-century canopied Herbert tomb. Richard Herbert (d. 1593) was the lord of Montgomery Castle, and father of the poet and cleric George Herbert.

And let's not forget the disco ball! 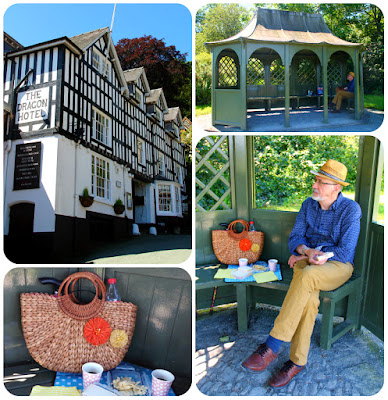 For our final holiday picnic, we were determined to have one with a spectacular view. So we climbed the steep lane leading from The Dragon Hotel towards the remains of the 13th century Montgomery Castle.

Slightly out of breath after our exersion in the blazing midday sun, we were delighted to find a shady gazebo waiting for us. How perfect! We didn't have it to ourselves for long though, as it proved to be a popular spot for spending one's lunch break. 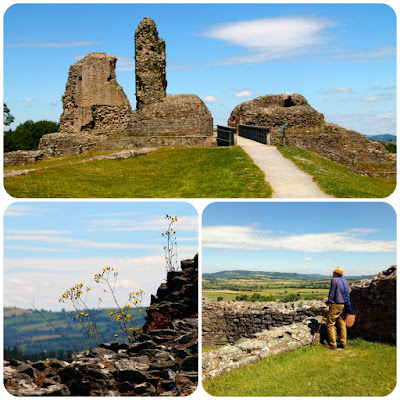 Perched on a rocky ridge above the town, with all-seeing views across the Welsh border, the castle's ruins which are managed by CADW, the historic environment service of the Welsh Government, are very atmospheric. 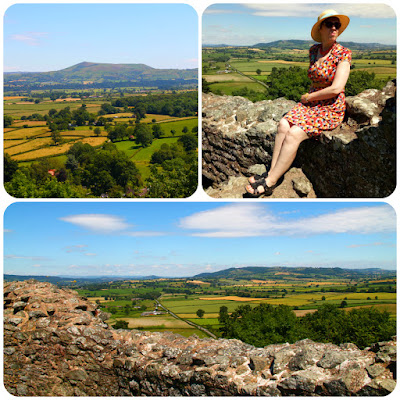 Look at that stunning view behind me! I could have sat and gazed into the distance for hours, at the fields of green, and those hazy hills, and that long straight road leading who knows where, but sadly our time was up.

So, we drove back - along that long and straight road - to the cowshed one last time to pack our bags and mentally prepare ourselves for the journey ahead. 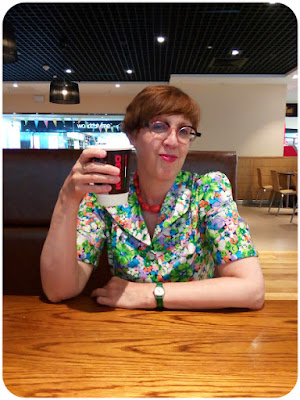 Fast forward one day, and here I am, enjoying my last beverage on English soil at the Eurotunnel terminal. I can't wait to be back ...

And so this travelogue, like our holiday, has come to an end. But there's no reason for tears, as in less than two weeks, we'll be off on our annual trip to Belgium's west country.

Until then, there will be outfits and other things to catch up on!