It's been raining virtually non-stop here for the last two weeks or so, but as luck would have it, the last Friday of September turned out quite nicely.

I'd taken the day off to celebrate Jos's birthday and, as we had plans for a day trip, we'd been anxiously eyeing the weather forecast for days.
We needn't have worried, as the weather gods presented us with a one-off day of sunshine, although it did rain briefly at one point later in the day. What a perfect birthday present! 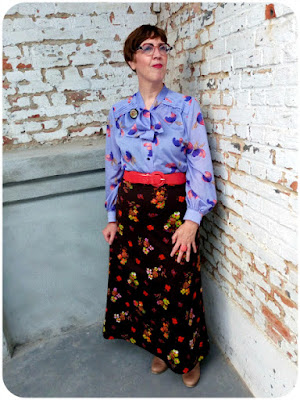 This time, I planned my outfit with care. The chocolate brown maxi skirt with its sprinkling of flowers was snapped up at Think Twice in June. Fully lined, it made a satisfactory swish-swish sound with every step. The lilac pussy-bow blouse with its abstract purple and orange print, also came from Think Twice, where I sourced it many years ago. I added my orange elasticated belt - so comfy - and my most comfortable booties, as we'd planned to do a lot of walking. 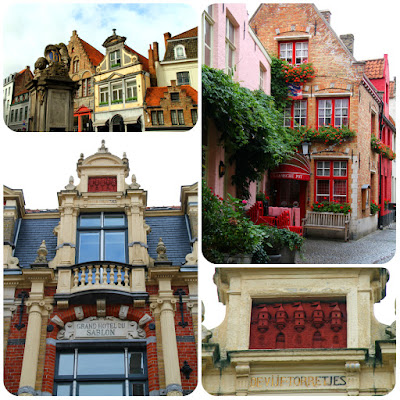 Not wanting to be stuck in traffic, we waited until well after rush hour to make a start, and arrived at our destination about one hour and 15 minutes later.

By then it was late morning and, after having parked our car, we proceeded to walk into the direction of the town centre by way of some less busy side streets, well away from the crowds who are drawn like moths to a flame to this town, which has around 8 million visitors annually. 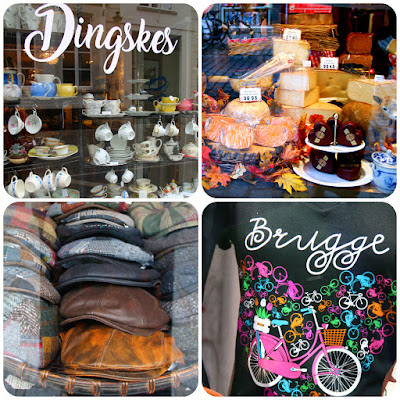 Has anyone guessed where we are by now?

Ah, the t-shirt in the shop window on the bottom right is giving the game away!

And here's birthday boy himself ... 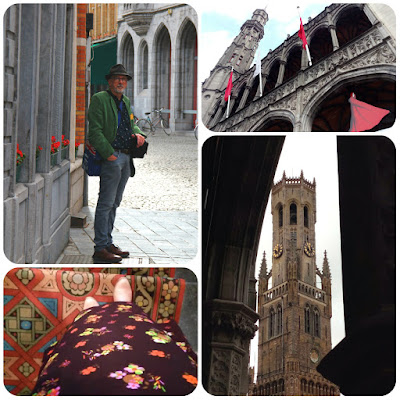 Having arrived at the huge main square, we sat for a while on a bench on the lower covered gallery of the Historium, a museum housed in a bluestone building with a neo-renaissance appearance completed in 1921, which allows you to revisit medieval Bruges.

From this vantage point, we watched the hustle and bustle on the square with the tall belfry reigning over it, then walked over to the belfry and through the passageway beneath it to reach its inner courtyard. The steps I'm standing on lead to a first floor gallery, from where it is possible to climb the belfry tower, if one is so inclined and able to get one of the limited tickets. 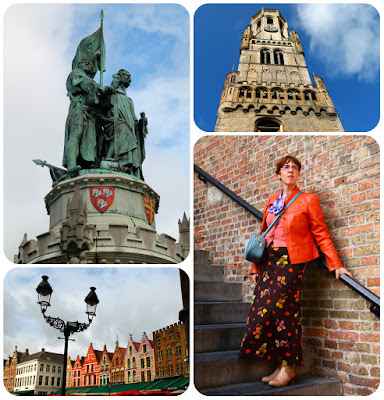 After lunch, for which we returned to a small bistro we'd passed in a quiet side street, we walked wherever our feet would take us, without any itinerary whatsoever.

And although Bruges is a tourist honey-pot all year round, we found it to be much quieter on this sunny Autumn day than on our last visit back in April. 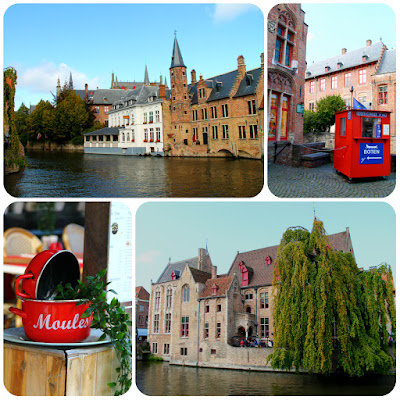 We were even able to make some relatively crowd-less photographs of the Dijver canal and the Rozenhoedkaai, a most popular area which is usually thronged with sightseers, with a constant stream of canal tour boats churning up the water.

There's no doubt that Bruges is beautiful in all seasons, but I found it particularly picturesque surrounded by Autumn splendour and bathing in that low-slanting golden sunlight which is one of the crowning glories of the season. 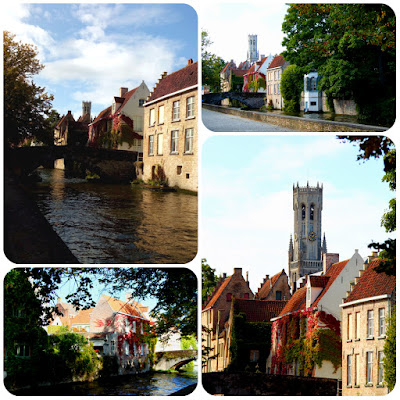 It's surprisingly easy to get off the beaten track in Bruges if you just wander a street or two away from the so-called golden triangle containing the majority of the city's major tourist attractions.

The delightful tree-lined Groenerei (above) is just minutes away from one of the busiest corners in Bruges, yet it was relatively quiet apart from a handful of people joining us in strolling along its cobbled quayside. 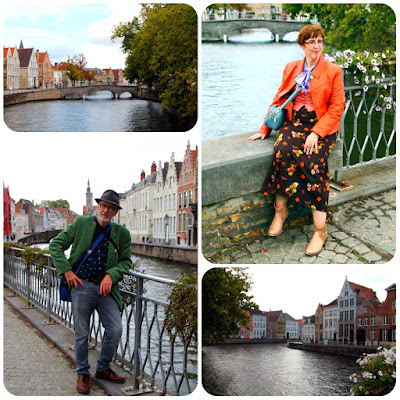 Crossing the busy Langestraat at the end of the quay, we walked alongside a wide canal towards the Hansa Quarter.

Here, in this now peaceful corner of Bruges, the canals are flanked by the residences and warehouses built by medieval merchants from across Europe in an enchanting medley of architectural styles. 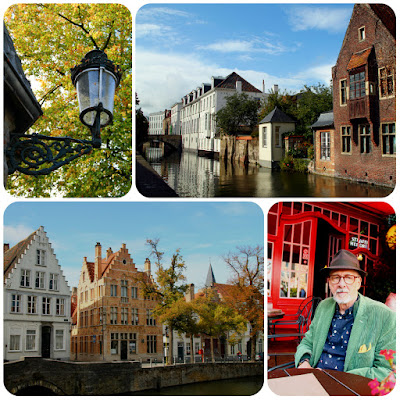 At this point, our plan was to walk back into the direction of the town centre, but we were distracted by the sight of a cozy little terrace, where we grabbed a seat and enjoyed a cup of coffee while resting our feet.

We then wandered around the corner and strolled along the narrow Gouden-Handrei, which must be one of Bruges' loveliest streets, its canal-side lined with a string of delightful summer houses belonging to the houses fronting the street behind. 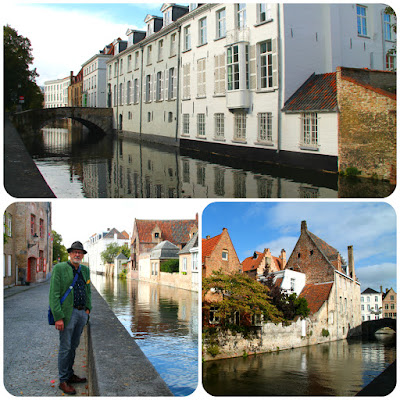 The sun, which had been playing hide and seek with the clouds for a while, was now making up for its bad behaviour, and was assisting the tranquil waters of the canal in producing the most picturesque reflections. 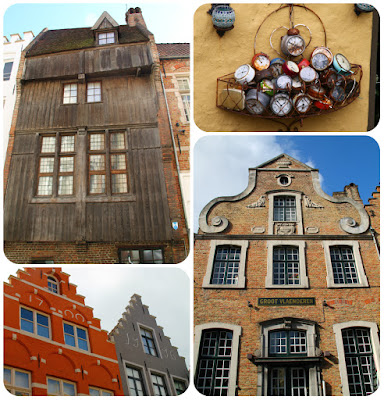 We kept on walking and drinking in the views and at one point found ourselves lost in a maze of cobbled streets. At that point, the clouds had won the game they had been playing with the sun, and decided to treat us to a shower. 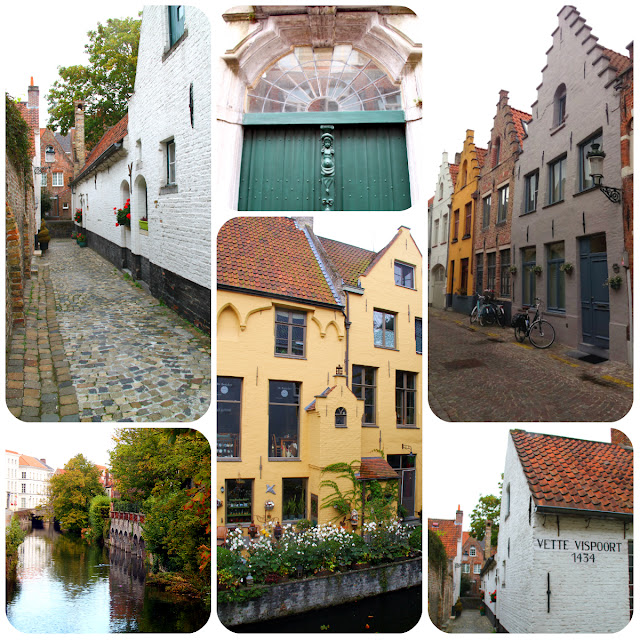 As luck would have it, we came across the St. Jakobskerk (or St. James's church), providing us a with a sanctuary to escape the rain.

We got talking to a friendly and very knowledgeable guide, rather incongruously dressed in ill-fitting shorts and t-shirt and wearing a rather unsightly bumbag, who was pleased to point out the church's main treasures to us, including some age-old graffiti on the choir stall benches. 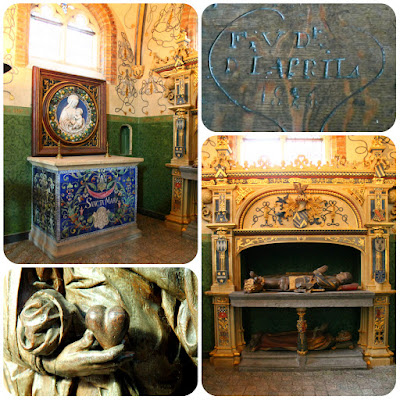 Emerging from the church, it was clear that it had rained quite heavily while we were inside. In fact, we were not out of the woods yet, as the odd raindrops were still trying to get us to open our umbrellas. But we didn't, as I suddenly realized where we were, which was around the corner from the town's Think Twice shop! 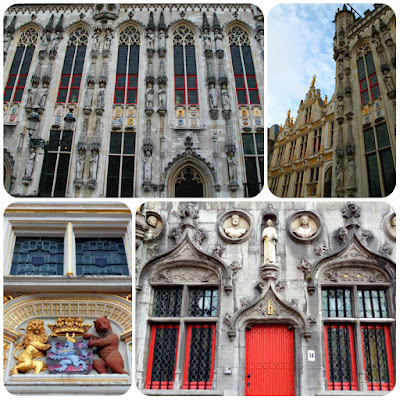 Inevitably, I had to go for a browse and I even found one or two things, but these will be for a future post.

We were quite parched by then, so we went into a well-known establishment on the market square for refreshments.

As it was still too early for dinner, so we strolled towards the imposing Burg square, where several magnificent buildings are vying for attention. It was well after closing time and the square was relatively empty of people, so that we had all that splendour practically to ourselves. 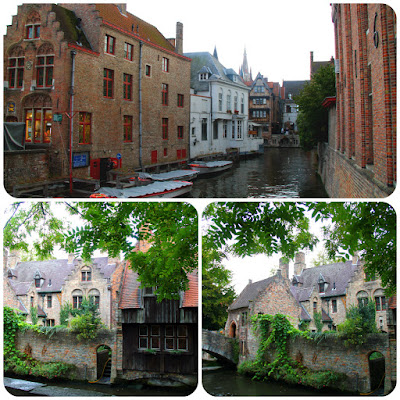 Tarpaulined canal tour boats were lined up along the Dijver canal and the first of the twinkling evening lights appeared in the shop windows.

But even this late in the day, people were still taking pictures on the tiny hump-backed Bonifacius bridge (bottom right), although the usual queue of selfie-stick wielding tourists had thankfully gone. 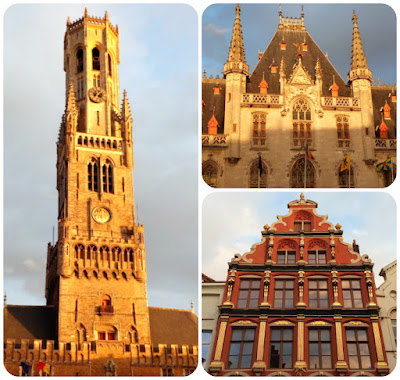 While having dinner on the heated outside terrace of our favourite restaurant, it started raining again, briefly but quite heavily.

Thankfully, it had stopped by the time we left to make our way back to the car park, with the golden evening sunlight providing a grand finale to our day.

Posted by Polyester Princess at 19:44