Yesterday, it was exactly 112 years ago that my maternal grandmother, Bertha, was born.

She arrived in this world on the 6th of May 1905, and must have caused quite a stir, as she'd brought along her twin brother, Augustinus, who would go by the name of Gust.

The twins were my great-grandparents' first borns and they were joined in 1909 by a little sister,  who sadly didn't get to see her first birthday.

Although my grandmother sometimes alluded to her being a twin, I'd no idea what had happened to her brother, nor that she'd once, however briefly, had a little sister.

Many years ago, my Dad gave me several boxes containing photographs and documents belonging to my Mum's side of the family.

Among these was my great-grandparents' "marriage booklet" (called trouwboek in Flemish), which is a kind of marriage register every couple tying the knot here in Belgium is issued with. In this booklet, all children resulting from the marriage are officially entered, with their full name(s) and date of birth. It also mentions the date of death of any children still living at home. 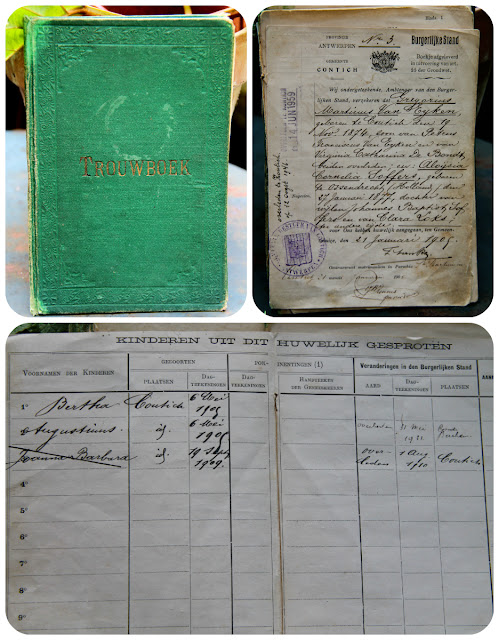 It is from this booklet that I learned of the existence of the little sister, and that Bertha's twin brother had died in 1931, aged 26. When I asked my father if he knew what had happened to him, he said that Gust had died as a result of an accident at work, but that was all he knew really.

It was also from my Dad that I learned that just before the First World War, my great-grandparents acquired a plot of land in our village (I have the original deed, found at my dad's a couple of months ago) and were making plans to build a house. When war broke out, however, they abandoned the project, and fled to neutral Holland, living with family relations of my great-grandmother, Aloysia.

According to her "praying card"  (called bidprentje in Flemish, a small memorial card, which is distributed to all those who attend a funeral), she was actually born in Ossendrecht, Holland, and it is possible that she was at least part Dutch.

My grandmother sometimes mentioned her Dutch relatives and I vaguely remember some of them being present at her funeral.

In one of my boxes of photographs are several portraits, printed on carton, mentioning the name of a photographer in Bergen op Zoom, Holland. 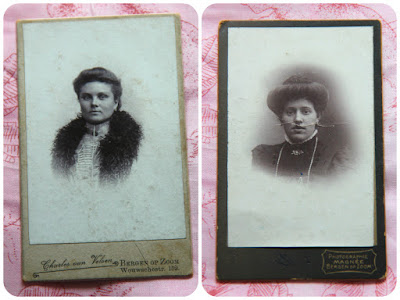 The lady on the right is my great-grandmother, Aloysia.

I have many happy memories of that house, where I had lunch every weekday and spent many a Wednesday afternoon (school half day), until right before my grandmother - the first to go - died in 1974.

It was there, in one of the attic rooms, that all the photographs were kept in a chest of drawers, along with a beautiful, shiny conch shell. 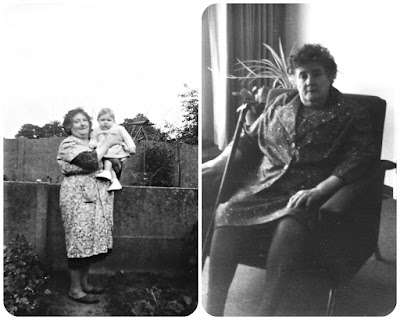 By the time I came along, my grandmother's health had seriously deteriorated. She - like my mum after her - suffered from rheumatoid arthritis, and painfully hobbled along aided by crutches. Later, she even slept on a pull-out couch (bought from a mail order catalogue: how peculiar that I remember that part) in the front room, as she was no longer able to get up the stairs. As she wasn't very mobile and hardly left the house, she had gained quite a bit of weight, which is mainly how I remember her.

It is me she is holding in the photo on the left. Taken in 1962, it is hard to believe that she was just one year older than I am now. The photo on the right was taken in my parents' house in the late 1960s. 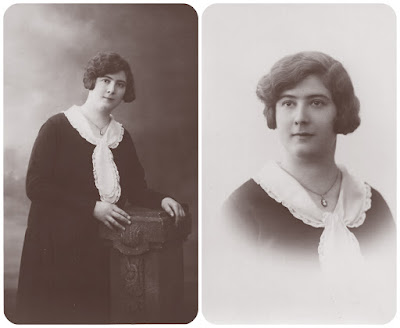 My Dad used to tell me that Bertha was reputed to have been quite a beauty when she was young, pointing to a couple of framed photographs on my grandparents' mantlepiece, depicting a glamorous lady in old fashioned clothes, which he claimed was my grandmother!

Now, back to Bertha's story, or at least what I know of it, as it all seems to be shrouded in a veil of mystery. 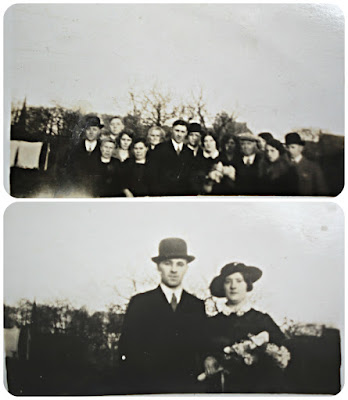 I often wonder at the fact that they married so late in life. It's so sad that there's nobody left to ask. How I would have loved to talk about all this with my Mum, who wasn't very forthcoming on the subject of her own accord.

It strikes me that the couple isn't smiling in their one and only wedding photograph. The wedding group, all dressed in black, look as if they have gathered for a funeral, cowering in the bottom of the photograph, with that great big sky above them and washing drying on the line at the edge of the frame. 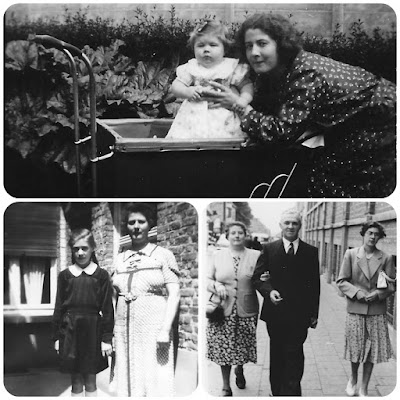 My Mum was born almost exactly one year after the wedding, and I particularly love the photograph of Bertha proudly showing off her little girl in her pram!

But I keep getting diverted.

Among the myriad of photographs I inherited are quite a few showing my grandmother - pre-marriage, I suppose - posing in different outfits and locations, always dressed to the nines. 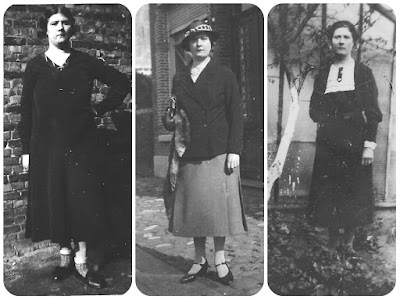 In some of them, she is posing with her equally stylish friend. 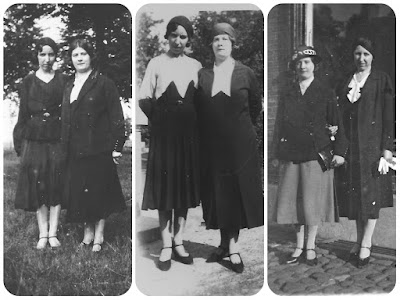 The garden was a favourite backdrop, while both the photographs below, where she is posing on her own (left) and with my grandfather (right) are taken in our village, which is only just recognizable today. 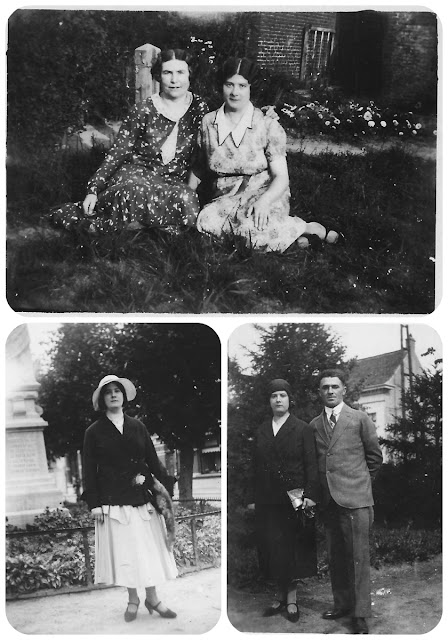 She really had quite a wardrobe and I presume she made most of it herself. There was, after all, an ancient Singer in a corner of my grandparents' dining room. 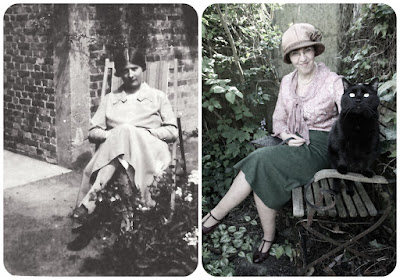 The bottom line is that I might very well have inherited my passion of clothes from her, along with her name, Bertha, which, her being my godmother, is my second name. 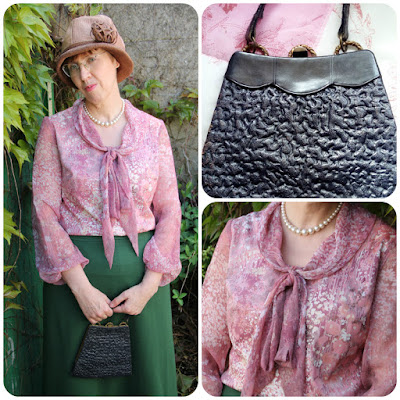 I wonder what she would have thought of this Polyester Princess lark ...

Posted by Polyester Princess at 18:55