All the leaves are brown and the sky is grey


So what is one to do on such a cold and miserable autumn day?

It was the 11th of November, which is an official holiday in Belgium. All the shops were closed, there were no interesting flea markets nearby, and after the rain of the last couple of days it was too muddy for one of our favourite walks.

In spite of the weather, the prospect of being cooped up inside the house all day did not appeal either, so after some debate we decided on a little road trip to the small town of Scherpenheuvel. 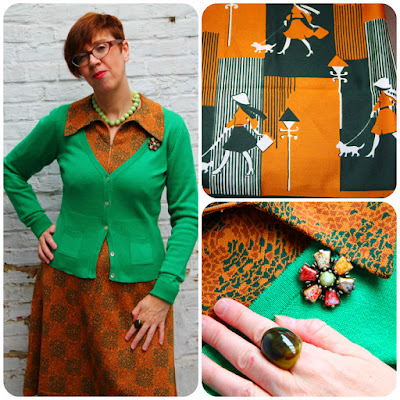 I dressed warmly for the occasion, in suitable autumnal colours.
My dress, which closes with a zip at the front, has almost the same colours nature is wearing right now: amber with the occasional dash of dark green provided by those leaves which are still trying to resist their fate.

I added a bright green cardie, charity shopped for € 3 a couple of weeks ago. It's from an overpriced Belgian brand called "Lucy Has A Secret" and would have been quite expensive originally, even if it's just an ordinary cardie ...

The brooch was charity shopped in Wales and the light green beads came from Blender Vintage Shop, as did the deadstock gloves. 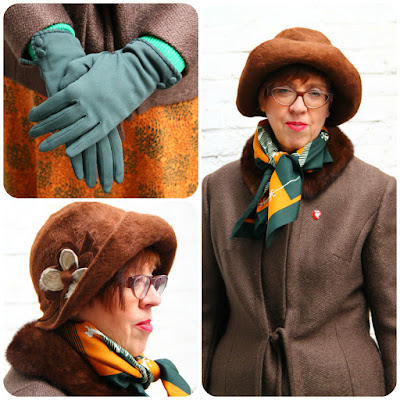 I chose 50 den tights in a dark mossy green and opted for a comfortable pair of booties, although later on I regretted not wearing full length boots. 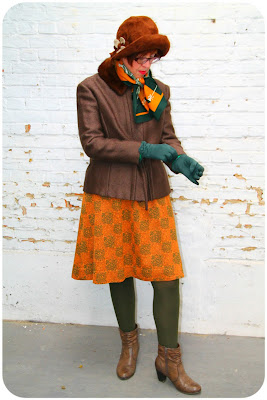 It was exactly the kind of weather for this fake fur collared jacket, which came from Think Twice and has a posh sounding Paris label.

I love the scarf, featuring elegant ladies walking their dogs under lamp posts, but I switched to a warm woolly one later in the day.

The hat, which had its first outing, was charity shopped back in spring.


After a leisurely drive of just over an hour, we arrived at Scherpenheuvel, which literally means "sharp hill", and has been Belgium's number one site of pilgrimage for centuries.

In fact, people visiting a statue of the Virgin Mary have been reported dating back to 1304. 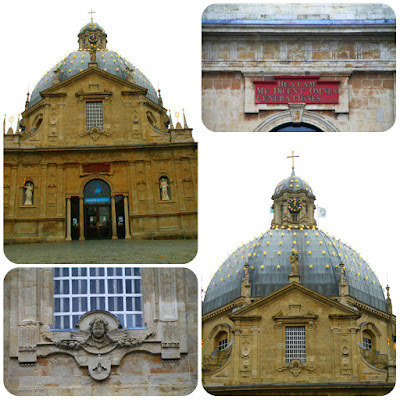 I'm sure you will not be surprised to learn that over the years many legends and miraculous events have been attributed to the statue, which hung in an oak tree on top of the hill. 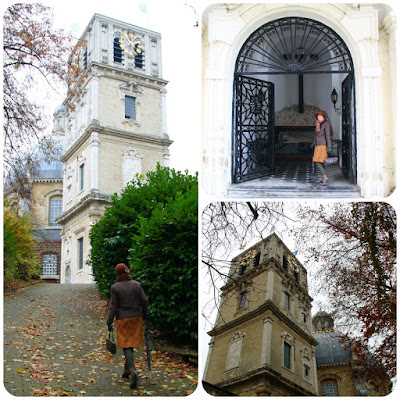 The legend goes that on a certain day a shepherd boy tried to take away the small statue from the tree, but before he could do so he was paralyzed on the spot. When his master came looking for him and found the boy in this condition, he hung the statue back, after which the boy could move again.

This miraculous story spread and more and more pilgrims found their way to Scherpenheuvel. 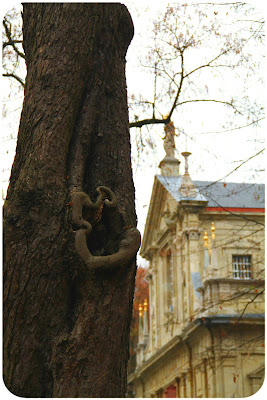 People would come whenever a member of the family suffered from illness, and traditionally they would walk round the tree three times while praying.

Eventually, a wooden chapel was built.

In the early 17th century, when Flanders was governed by the Archdukes Albrecht and Isabella on behalf of the Spanish king, they regularly traveled to Scherpenheuvel and enriched the shrine with many gifts. In 1604 they replaced the wooden chapel by a stone one. 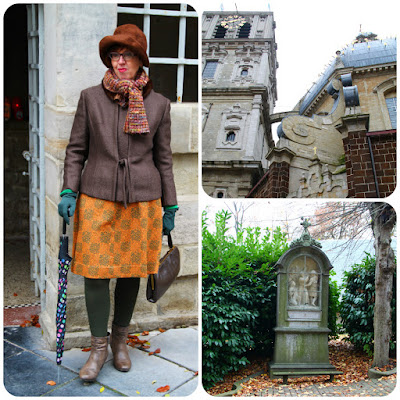 This chapel eventually became the Basilica of Our Lady of Scherpenheuvel, which is a Roman Catholic parish church and minor basilica. It was built between 1609 and 1621, and is said to be the first Baroque church in Flanders. Later on more buildings, including an oratory and a cloister were added. 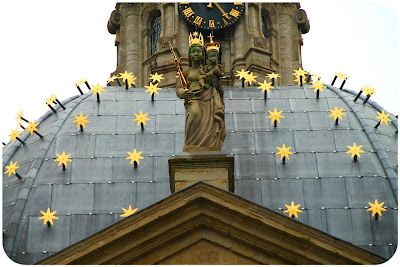 It is a domed church in an enclosed park (called a "Hortus Conclusus"), in the shape of a seven-pointed star. The star represents Mary (Stella Maris or Star of the Sea) and 298 gilded stars were scattered over the cupola. 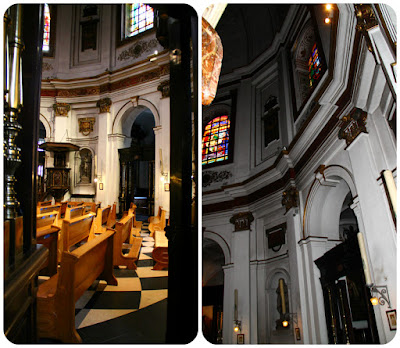 The inside of the basilica is small and dark and very quiet, with a handful of people praying in almost complete silence. 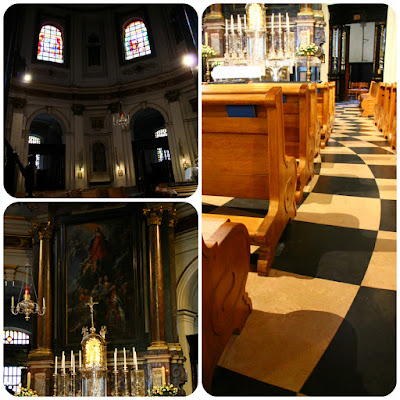 You could have heard a pin drop, so my camera shutter was making quite a lot of noise. I'm not even sure photography was allowed, but as I didn't see a sign telling me not to, I just went ahead. 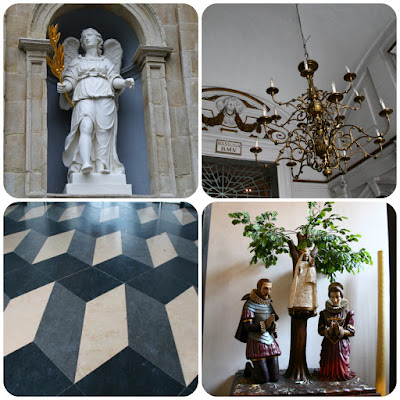 At the side of the basilica, there was what looked like a garden shed, where candles of all shapes and sizes could be bought and burned, invoking many different favours. 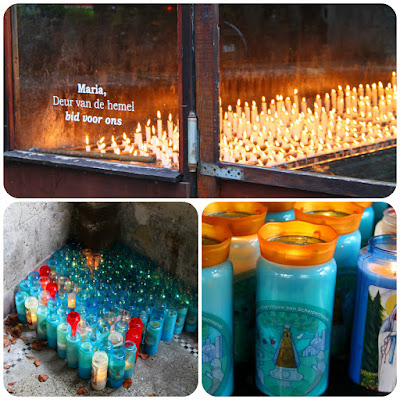 In fact, there was no shortage of places selling candles. They were sold at the stalls and shops in the square, one of which was a veritable treasure trove of holy statues and other religious paraphernalia. 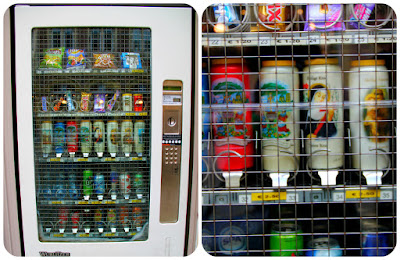 And should you be in need of burning a candle in the middle of the night, then there's no need to despair, as one of the shops has a vending machine which apart from soft drinks and candy bars, also dispenses votive candles.

There is a tradition of going on a pilgrimage to Scherpenheuvel on foot in the month of May.

When he was a boy, Jos came to Scherpenheuvel many times with his mother, although they came by bus and not on foot, which took almost twenty hours from where he lived. 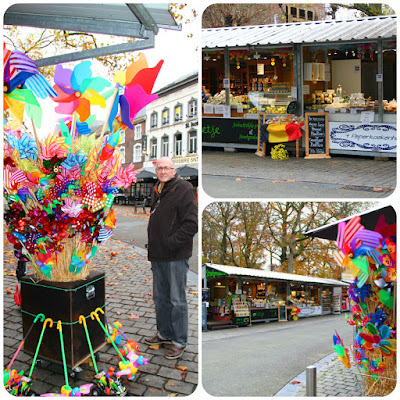 He remembered walking towards the basilica on a road flanked by stall after stall selling souvenirs, religious tat and local confectionery, of which now only a handful remain in the square surrounding the basilica.

A typical local delicacy are "noppen". These are small, round pastries made from a kind of gingerbread dough flavoured with aniseed. To be honest, I thought they tasted rather bland. 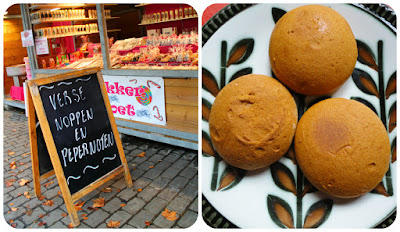 Back in the day, it was said that if you didn't take some "noppen" home with you, you hadn't been to Scherpenheuvel.

Nowadays, surely it's enough to show the photographs on your blog to prove you have been there!